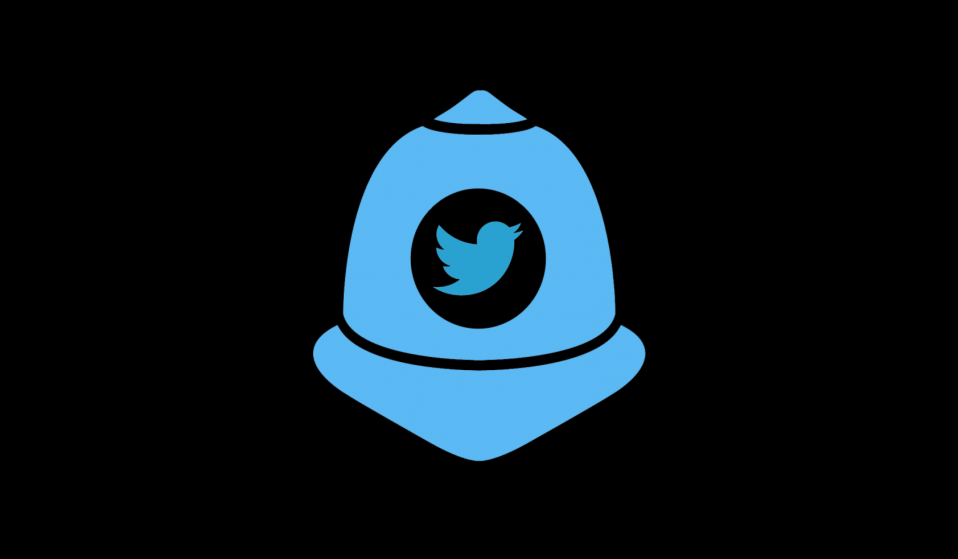 Twitter users claiming to be police officers have been responsible for launching sustained attacks on other accounts.

Twitter users claiming to be police officers have been responsible for launching sustained attacks on other accounts. After experiencing this abuse firsthand, journalist Rebecca Tidy uncovers the scale of the problem.

“f**k off you sad individual”

I watched as the tweets poured in on my Twitter notification panel; a seemingly endless stream of vitriol. There were literally hundreds of aggressive comments coming from anonymous accounts claiming to belong to police officers and self-proclaimed supporters of the ‘thin blue line’.

I’m no anti-policing activist or Kill The Bill protester: I’m simply a journalist reporting on criminal justice. While our democratic society has deemed it unlawful for hundreds of cops to physically enter your bedroom – all at once – to hurl abuse at you, there seems to be an unwritten rule that they may do so virtually via Twitter, without so much of a peep from their employer whose name is displayed for all to see.

During this particular pile-on in September 2021, an alleged Scottish police inspector posting under the now-deleted account @west_reponse had quote-tweeted my reply to a fellow academic, where I’d asked whether the increase in anti-policing protests is likely to lead to a rise in physical assaults on officers. This single incident led to hundreds of vindictive tweets, overwhelmingly from people whose Twitter bios or tweets clearly state they’re current or former law-enforcement workers.

I get hundreds of tweets and DMs – from serving police officers, usually male, each week. They take my articles and tweets out of context, then encourage their colleagues to make unkind comments. pic.twitter.com/OlvvgS68hp

There was no malice behind my tweet and as a former criminology and public services lecturer, I often research law enforcement issues, including public trust. But @west_reponse’s quote tweet opened the floodgates to hundreds of police officers and their supporters, all of whom were clearly enraged by this innocuous comment. (Responding to Huck’s request for comment, Police Scotland said that they “don’t see anything here that requires a response from Police Scotland.”)

It wasn’t the first time that people claiming to be police have attacked me en masse. Over the years, I’ve received literally thousands of irate tweets from Twitter users whose bios proudly note their day job in law enforcement, but fail to provide their precise identity.

I’m usually called all kinds of names – unprovoked – in the hours after one of my drugs or policing articles is published. A piece on the psychological impact of police house raids on children triggered hundreds of angry tweets from cops who perceived it as a personal insult on their values and ideals.

These abusive tweets often arrive in quick succession, usually triggered by one of Twitter’s popular ‘unofficial’ UK policing accounts, such as Foxtrot Cop, who says they’re a Met traffic officer, or Inspector Gadget, whose bio says they work for a south of England force. Regardless of the intention, nasty attacks seem to flow in the wake of their tweets. (Inspector Gadget and Foxtrop Cop refused to respond to Huck’s request for comment.)

Professor Paul Bernal, an IT and media law specialist at the University of East Anglia, calls this phenomenon a Twitter pile-on. “It’s when a Twitter user encourages, enables or instigates a ‘mass attack’ on another Twitter user,” Bernal says. “Crucially, the instigator won’t say anything particularly nasty – it’s the followers, those ‘piling on’, who say the nasty stuff. And this means the instigator can falsely claim not to be doing anything wrong.

“The key to a ‘successful’ pile-on is for the instigator to have a lot of followers, usually with a particular political or social perspective,” Bernal explains. And this is why these large unofficial policing accounts are so powerful – even if wholly unintended, they’re able to direct their tens of thousands of followers, all with a shared interest in law and order, to tweet abuse at any individual who portrays cops as anything other than heroic.

Whether it’s Inspector Gadget’s Dog, Bullshire Police or Dr PC Angry, a cursory scroll through their follower lists reveals that these accounts are magnets for police officers who share a certain kind of opinion. They’re replete with tweets criticising armchair experts, ‘the woke brigade’ and graduate diversity initiatives such as Police Now. One recent tweet praises a video of public order dogs viciously attacking unarmed protestors and another attempts to undermine the validity of institutional racism claims.

It’s not only rank-and-file officers who appear to be engaging in this targeted harassment: the Chief Constable of Northampton Police, Nick Adderley, used a series of quote tweets to respond to a female member of the public who had reported an alleged offence by officers in December 2020. Critics accused Adderley of deliberately sharing the woman’s username – with a flippant remark – in full knowledge that it would lead to her being hounded by hundreds of officers. Adderley failed to comment on any of this abuse.

Likewise, the boss of the Scottish Police Federation, Constable Calum Steele, was found to have made inappropriate and ­offensive comments about ex-­assistant chief constable Angela Wilson on Twitter. Given that Steele was still allowed to keep his job after the incident, it’s perhaps unsurprising that so many cops consider it acceptable to subject others to abuse online.

I know I’m not alone in the targeted abuse I’ve received. Ali Hassan received thousands of aggressive tweets from ex-colleagues after leaving the Metropolitan Police and publicly commenting that “officers were ostracised and denied promotions if they challenged inappropriate behaviour”.

Anonymous and identifiable users, displaying bios and tweets claiming they’re run by police officers, accused Hassan of “pulling the race card”, “throwing your toys out of the pram” and being “full of shit”. He was regularly the subject of pile-ons instigated by users with large followings.

Medical cannabis patient and activist, Milly Gilbert, from London, experienced abuse after defending Hassan. “I saw the abuse directed at Ali and stepped in to offer my support, as the comments felt so wrong – this meant I received hundreds of similar responses, saying I’m stupid and that I have no clue what I’m talking about,” she tells Huck. “They’d call me a drug dealer, say I’m high all the time or had smoked too much, all because I’d mentioned medical cannabis in my bio. Before long, they were piling-onto me literally every time I commented on videos of them abusing their power or being racist.”

Like Hassan, Adam Pugh is a former cop who was targeted by accounts claiming to belong to police officers after openly acknowledging the organisation’s failings. Pugh, age 35, spent four-and-a-half-years working as a Metropolitan Police officer in Southwark, Peckham and Woolworth, before leaving in 2014. Since then, he’s publicly condemned tactics such as stop-and-search which disproportionately target Black people in London. This willingness to put his head above the parapet to reduce harm to the public has led to a tirade of abuse from people claiming to be cops on Twitter.

“Somebody started a Crowdfunder to have me deported, don’t ask me to where [as I’m British] – I got called all kinds of names,” he notes, “an alleged police officer told me I should release my chimp child [I have a biracial son] back into the wild – and another said he would flush my ape down the toilet.”

Responding to Huck’s request for comment, The Metropolitan Police said: “There are many social media profiles purporting to be serving officers in the UK. We do not monitor or engage with these non-official accounts and it wouldn’t be for us to say whether or not it is that of a serving Met officer.”

Pugh says that the toxic, discriminatory culture we see playing out on Twitter is a reflection of policing in the UK at large. A recent report from the Independent Office for Police Conduct cited clear evidence of racism, misogyny, bullying and harassment involving serving officers stationed at Charing Cross Police Station. The damning report detailed disturbing messages about about Muslim “fanatics” and “Somalian rats”, and ‘jokes’ about rape exchanged between officers via WhatsApp.

Actual messages sent between police officers, taken from the IOPC report into @metpoliceuk:
On racehttps://t.co/6YgZyBdxgA pic.twitter.com/DMTzXIr258

The impact of this toxic environment goes beyond nasty words: as Pugh notes, it can impact the criminal justice process. “We used to talk about a canteen culture, where police officers want to get their stories straight and make sure that everything is synchronised,” he says. “But this canteen culture now spills out onto the internet, onto Twitter, and you see anonymous police officers discussing ongoing investigations on a regular basis, giving each other advice on what to say. ”

Pugh points to a video of a Met officer – PC Joshua Savage – angrily smashing a young Black man’s car windscreen in a case of ‘mistaken identity’ as an example of this behaviour spreading online. “I noticed a tonne of anonymous accounts tweeting that there’s always grounds to smash someone’s window and this is how you should justify it and this is the Act that you should use,” he says. “It was odd, as they were discussing an open, ongoing investigation – publicly– on the Internet for everyone to see [which is unlawful].”

I’ve reported the abuse directed towards me – including death threats – to Devon and Cornwall Police, but they refused to investigate unless I have evidence the culprits live in their geographic area. They even commented that “this wouldn’t be happening if you had followed our advice and blocked them”. (Devon and Cornwall Police did not respond to Huck’s request for comment).

Unfortunately, blocking these abusive accounts is ineffective. Twitter users can still tag an account that has blocked them, which means their thousands of followers continue to pile-on to the victim with outright lies, violent threats or contemptuous comments. The sheer volume of anonymous policing accounts – and the fact that new accounts are opened everyday – makes it impossible to block every single prospective abuser.

When officers direct abuse towards individuals using a social-media platform like Twitter, they’re simply reminding the watching public that this is a police culture rotten to its core. Each sexist, racist or discriminatory tweet only strengthens the characterisation of the police as institutionally corrupt, and undermines the argument that this is an organisation capable of reform.

Linkedin
RELATED ARTICLES
OTHER ARTICLES
Since 2007, Gideon Mendel has made 20 trips to document floods in 13 countries. The result is an alarming record of what has already been lost to the climate emergency.
Filmmaker Laura Poitras discusses her new documentary which traces the remarkable life of the artist-activist and the impact of her battle against the US opioid crisis.
After building his reputation covering the US civil rights movement in the 1960s, the photographer went on to produce some of the most enduring images of the past century.
Following the release of his debut single, Deyaz talks battling addiction, dealing with his struggles through music, and building a budding music career from his living room.
AI companies that develop image-generators using copyrighted artwork from the internet are coming under fire from artists who say that it amounts to theft.
A new exhibitions brings together the work of photographers who documented the deep unrest of these pivotal decades.