News & Politics / Carceral feminism is not the answer to gendered violence 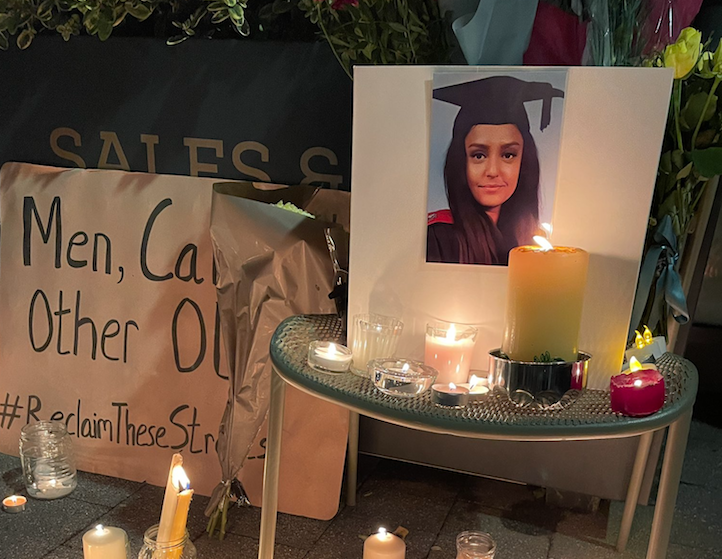 The expansion of state control and power will not solve gendered violence and ultimately ends up harming women, argues writer Shahed Ezaydi.

In the wake of the devastating killing of primary school teacher Sabina Nessa, we must respond to gendered violence critically and not revert to calling on the expansion of state control and power, which ultimately ends up harming women, argues writer Shahed Ezaydi.

On Friday 17 September, a young woman left home to meet a friend at a local pub five minutes from her house. She never made it. Sabina Nessa, a 28-year-old teacher, was attacked and killed, and her body found the next day in Cator Park in Kidbrooke, south east London. From CCTV footage, it’s believed that Sabina was attacked by a man on her walk to the pub, and the Metropolitan Police have now arrested a 36-year-old man on suspicion of murder.

The news of Sabina’s death reignited the conversation around gendered violence and misogyny, specifically when it comes to women’s safety in public spaces. It’s a conversation that we seem to be having again and again every time news of another woman being murdered hits the headlines. It’s exactly what happened when Sarah Everard was raped and killed by a serving Met police officer in March, or when Bibaa Henry and Nicole Smallman were murdered in June 2020. In fact, a woman is killed by a man every three days. There are so many women that we simply don’t hear about.

The common thread in many of these conversations around gendered violence is the call for greater punitive measures in laws and policing to help keep women and marginalised genders safe. The Mayor of London, Sadiq Khan, publicly called for misogyny to be made a hate crime and public harassment against women a criminal offence. There have also been calls for longer prison sentences for crimes involving violence against women, with Labour MP Jess Phillips, the Shadow Minister for Domestic Violence and Safeguarding, demanding that violence against women be treated with the force of terrorism laws.

When you have institutions such as Greenwich Council distributing more than 200 alarms to women in the Kidbrooke area where Sabina’s body was found or the Met Police advising women to not go out alone while they searched for Sarah Everard’s killer, it’s no wonder that many are turning to more punitive measures in an effort to tackle gendered violence.

Tonight, in anger and grief, I joined women at the vigil in Greenwich to remember a murdered sister.

Carceral feminism operates under the assumption that violence is caused by individuals in isolation and that the punishment of these individuals will lead to greater safety for women. It assumes that the systems in place treat everyone in society equally and fairly, so the best possible solution is achieved for all. It’s a feminism that pushes for increased policing, surveillance, and harsher laws and policies when dealing with gendered violence.

After the murder of Sarah Everard and facing pressure to act, the government announced an additional £25 million for better lighting and CCTV as well as a new scheme that would see plain-clothed police officers in bars and clubs. It is these solutions which ultimately fail to take into account that misogyny and violence against women is not due to a few individuals acting in isolation, and that the current systems do not treat people fairly. Gendered violence is structural and systemic, and the systems are geared to work in favour of a select few in society. There are many laws that already exist to tackle gendered violence, and yet the problem remains. Women are still harassed, attacked, and killed.

Increased policing and legal powers will not lead to women feeling safer, if anything, it will only make matters worse. We all saw how the Met Police treated women at Sarah Everard’s vigil on Clapham Common. Women were physically assaulted, kettled, and violently arrested for attending the vigil. And we can’t forget that the perpetrator in Sarah’s case was a police officer himself who had a history of harassing women. How can we call on stronger police powers when they are a part of the problem?

Reverting to the expansion of state control and power in order to tackle gendered violence ultimately ends up harming the same women you’re trying to protect. Research has found that the increased presence of police in the lives of women has meant it’s more likely they will be arrested through the ability of perpetrators to manipulate systems in their favour or police targeting women for unrelated matters.

Insecure immigration status is often used by perpetrators to control and exert power over migrant women, with the threat of deportation looming over them if they decide to come forward with their abuse to the police. Rape and sexual abuse survivors who come forward and report their experiences to the police end up being re-victimised through the police having them recount their abuse repeatedly, or asking questions based in victim-blaming. And that’s if a woman is even believed by the police in the first place.

This isn’t to say that we should police how people grieve gendered violence or criticise how some may want to pursue justice for their loved ones. Abolition will only be achieved if we can show that legitimate and normalised forms of alternative justice actually do work. This includes preventative measures based in education that tackle gendered violence at its roots, from dismantling rape culture to a thorough sex education that centres consent.

And, solutions that are built by and based in local communities, where members of a community come together to decide how perpetrators are held accountable for the harm they’ve caused, in a decisive shift away from the prison-industrial complex. A system based in abolition also means ensuring that all people in society can access properly funded public services as societal inequalities exasperate many of the conditions that violence tends to exist in.

Our current criminal justice system doesn’t work. It doesn’t protect women or keep us safe both in public spaces or at home. Gendered violence is so deeply embedded in our society that abolitionist systems of care are the only way forward out of this constant cycle of violence. It is abolitionist feminism that will help to create a better, and entirely possible, world where women actually feel safe walking the streets.

Linkedin
RELATED ARTICLES
OTHER ARTICLES
Birdy Chu reflects on documenting the historic moment in which the territory was formally passed back from the UK to China.
By turning a real-life crisis into daytime television fodder, TV bosses have once again shown themselves to be completely out of touch with audiences.
Rogue landlords are exploiting young and inexperienced renters and leaving them in mental and financial turmoil, reports Niall Hignett.
A new project is documenting formerly incarcerated people as they transition back into civilian life.
Cindy Campbell recounts how her brother ushered in a new era of musical culture at a party she held in the Bronx in ‘70s.
The two-day long event returned to London this year, showcasing a spectacular parade, steel bands and Caribbean food.