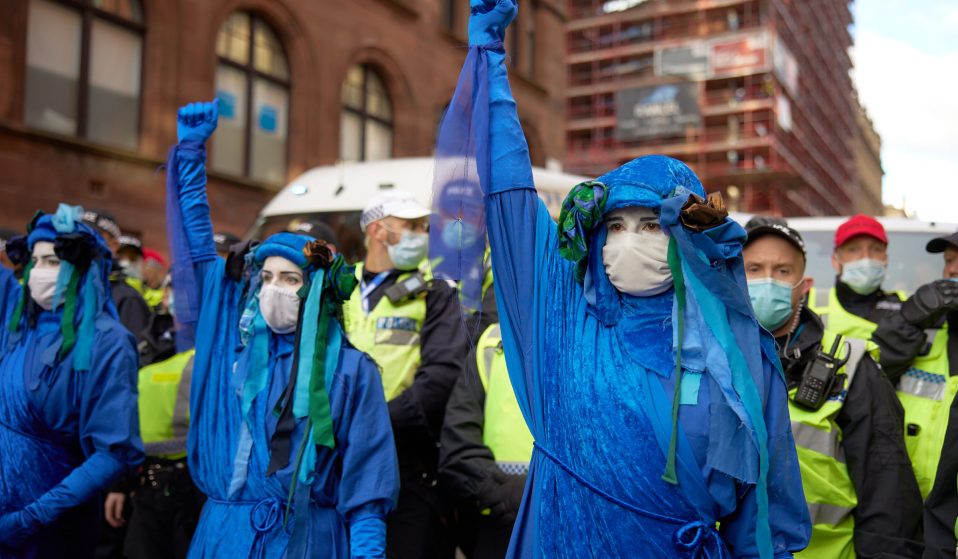 Just days into the conference, some climate protestors report being forced into a police kettle for hours without toilet access.

Just days into the conference, some climate protestors report being forced into a police kettle for hours in the cold without toilet access.

This month, the 26th Conference of Parties (COP26) is being held in Glasgow. The UN summit on climate change has seen delegations from almost 200 nations descend onto the city to try and hammer out deals, agreements and accords to prevent irreversible and catastrophic climate change.

In the run-up to COP26, as thousands prepared to gather in Glasgow, Scotland’s First Minister, Nicola Sturgeon, whose own constituency of Glasgow Southside lies just south of the centre, urged those attending to protest peacefully. Speaking just two days before the summit began Sturgeon said that the city had a “proud tradition” of peaceful protest, adding, “We want peoples’ voices to be heard”.

Now, just four days into the summit, activists are calling on Nicola Sturgeon to intervene to halt disproportionate policing of those protests. In a letter sent by COP26 Coalition, Stop Climate Chaos Scotland and the Climate Coalition, the first minister is urged to “ensure all police forces operating in Scotland for the duration of COP26 commit to, and be held to, a set of truly rights-based principles”.

The letter lays out a series of examples of disproportionate policing of activists in the city. It states that “numerous reports have reached us of police misusing their powers in individual interactions with protestors. For example, when the ‘Rail to the COP’ arrived in Glasgow, with young activists from all over the world, some campaigners holding a banner were threatened with arrest only for holding the banner.”

The letter goes on to allege that stop and search powers are being abused with protestors being given no explanation of why they are being targeted for search, nor provided with written receipts. It states: “In some instances, officers are unlawfully refusing to provide receipts for stop and search unless activists provide personal contact details. When one protester refused to give their personal details to the police, the officers accused them of stealing their own bank card after refusing to show ID and then confiscated their card.”

The activists have also called on Sturgeon to intervene on the excessive use of police kettling, which they state has been used to stifle protest. The ECHR ruling in Austin V Bailie [2012], they point out, states that police should not use a kettle to directly or indirectly stifle or discourage protest.

The letter refers explicitly to the kettling of activists who had attended a ‘No to Greenwashing’ march organised by Extinction Rebellion Scotland on 3 November. Reports from the ground differ but it is generally agreed that the kettle, which took place in central Glasgow after several hours of demonstrating in the area, lasted for at least four hours.

Police monitoring group Netpol collected testimonials from those within the kettle which paints a grim picture of conditions. On the lack of access to toilet facilities, one stated: “I witnessed people who desperately wanted to use the toilet or were freezing [it was around five degrees centigrade], but were denied exit by the police. They had to pee in buckets. Civil rights were violated this afternoon.”

Other testimonials spoke of police refusing to allow those in the crowd with medical needs, or those who were simply swept up in the protest, to leave. One stated: “I also witnessed a girl being prevented leaving the group while stating she had to go and take cancer medication. This girl was later allowed to leave after sustained pressure from myself and other members of the protest after initially being refused.” Another said: “A woman who was with us, who was a passer-by and nothing to do with the protest, also needed the toilet and they refused her to exit too, even though we confirmed she was nothing to do with the XR protest.”

Speaking to Huck, Barnaby, who was caught in the kettle, explains: “[It was] 6 hours with no toilet and hundreds of police penning you into this crowd and not letting you leave.” In the letter to Sturgeon, activists pointed out it was impossible to effectively socially distance whilst they were being contained.

On conditions within the kettle Barnaby added: “I didn’t see it, but apparently people were not let out even if they needed medication and yes, the bucket toilet was real.”

Another XR protestor who wished to remain anonymous told Huck: “We saw journalists try and leave and be told they had to speak to commanding officers who were outside the kettle to be able to leave. Inside the police were uncommunicative and at points out right aggressive.”

The march, which was peaceful, began at Buchanan Galleries. The XR protestor told us: “ As soon as we turned from the galleries up Sauchiehall street the police were ready for us. Right at the beginning there were police horses out blocking our path. It didn’t set a precedent for a nice, calm, peaceful protest.”

When the allegations of poor conditions were put to Police Scotland, a spokesperson told Huck: “Police Scotland is a rights-based organisation that puts our values of integrity, fairness, respect and a commitment to upholding human rights at the heart of everything we do. This means that we will protect the rights of people who wish to peacefully protest or counter-protest at COP26, balanced against the rights of the wider community.  Our approach during COP26 will continue to be proportionate and responsive to support the delivery of a safe and secure event.

“In order to maintain public safety and minimise disruption during an ongoing protest, Police Scotland officers may use a containment, which is a permitted policing tactic where a breach of the peace is taking place or reasonably thought to be imminent.”

Extinction Rebellion at the gates -literally – of #COP26. Chants of 'No more blah blah blah' pic.twitter.com/23RTURJtwz

Police Scotland declined to comment on any of the specific allegations contained within the Netpol testimonials. Kevin Blowe, campaigns coordinator for the group, told Huck: “At the outset of the COP26 conference, we were concerned that Police Scotland might start off emphasising its human rights obligations but grow increasingly impatient as the days wore on. Instead, senior officers are making the extraordinary claim that a repeatedly confrontational and oppressive policing operation, right from the very beginning, is somehow a ‘rights-based approach to protest’.”

Blowe continued: “The treatment of protesters who were kettled last night is just one reflection of this bizarre claim. Across the city, what we are seeing is rampant surveillance: officers repeatedly deciding to stop, search, photograph and follow people, not because of anything they are doing, but simply because they look like climate activists.”

Despite the heavy-handed policing, the thousands of climate activists in Glasgow, from individuals, to mass-action groups and organisations, are determined to carry on their fight. They are here to make their voices heard and to encourage leaders inside to take the big, ambitious steps needed to avert a disaster that is already playing out in many parts of the world.

Linkedin
RELATED ARTICLES
OTHER ARTICLES
Sean Maung’s photos are a love letter to the Black and brown communities that make up New York.
Rogue landlords are exploiting young and inexperienced renters and leaving them in mental and financial turmoil, reports Niall Hignett.
As the Scottish government announces a rent freeze, an activist with Living Rent who fought and won shares how they did it, and what must come next.
The two-day long event returned to London this year, showcasing a spectacular parade, steel bands and Caribbean food.
A 37-year-old woman shares how her abortion led her to become a clinic worker, and the abuse she’s received in that role.
Birdy Chu reflects on documenting the historic moment in which the territory was formally passed back from the UK to China.