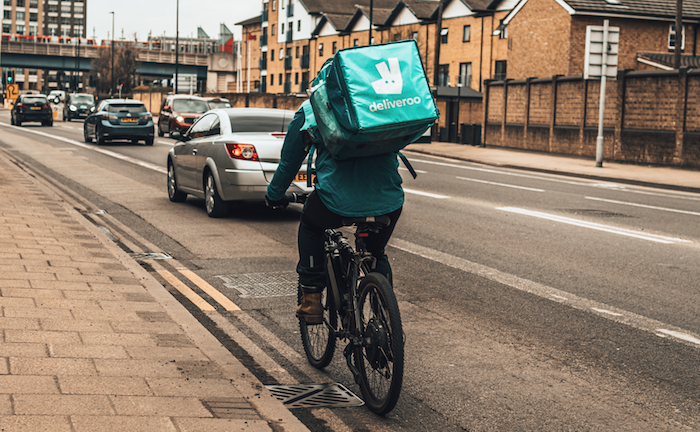 In the fight against bad bosses, workers are adopting the platform tactics used against them and adapting them for their own benefit.

In the fight against bad bosses, workers are adopting the platform tactics used against them and adapting them for their own benefit.

Pay rates for Deliveroo drivers in Edinburgh have gone up recently, but workers don’t know why. The variables determining how much they get paid are contained by an algorithmic ‘black box’, which no-one outside the company has access to. Workers are left in the dark about why their incomes rise and fall – an unpredictability which causes stress and insecurity, says Deliveroo rider Lena (who asked for her surname to be withheld to protect her anonymity).

“At the end of the week you’re anxious, because you don’t know how much money you will earn,” she tells Huck. “Rates are changing every day. We don’t know enough about why rates change.”

Although impossible to confirm, Deliveroo workers think the rate rises are partly due to a shortage of riders. One reason for upward pressure on wages at a national level is a lack of available labour: a million fewer people are in the labour market now compared to pre-pandemic. Employers are having to boost wages to attract and keep staff and some furloughed workers, given the choice, are not returning to low-paid or poor-quality work in sectors such as hospitality.

But relying solely on the market to boost incomes is risky, as riders could just as easily see their earnings fall again if more people join the platform, says Roz Foyer, general secretary of the Scottish TUC. If riders knew more about how their rates were determined, they might be able to achieve permanent increases.

It’s reasonable to assume some of the data feeding the algorithm is generated by riders themselves. As Deliveroo’s website states, the fee changes for each order delivered, and includes a variable amount based on the distance travelled. But with this data locked in the platform’s black box, riders are powerless to challenge the status quo. (Deliveroo did not respond for comment when asked what causes drivers’ pay rates to fluctuate.)

Beyond causing financial instability, it means that gig workers who want to see the algorithms that dictate how they work and how much they get paid can’t organise collectively to campaign for better terms and conditions. As Foyer puts it: “With the development of the gig economy, power and control has [been] more concentrated on the employer side, and increasingly difficult for workers to understand.” For rider Lena, asking Deliveroo why their rates change is fraught: “I want to get information, but I don’t want to push because I’m scared [of getting fired].”

In response to this data-driven power imbalance, platform workers, unions and academics are fighting back. Dr Christina Colclough, founder of the Why Not Lab, sums up the challenge: “How do we, without increasing the surveillance of workers, give them control?”

One approach gaining momentum is to adopt platform tools and techniques and adapt them for workers’ benefit. “Companies have an attitude of ‘We can watch you and not tell you’… Now workers are wanting to say, ‘We can watch you too’,” says Cailean Gallagher, coordinator of the Edinburgh Workers’ Observatory.

The Observatory was started by Edinburgh gig workers, including Lena and former rider Boyan (who asked for his surname to be withheld to protect his privacy), to monitor their working conditions, using a model of ‘reverse surveillance’. When they realised the information they needed to understand their pay was hidden from them, they started to work together to monitor the local gig economy in the hope of seeing behind the secrecy of the platforms. They are developing an app which allows delivery workers to record their hours and payslips, then collates users’ data to calculate average pay rates across the city. Ultimately, they hope to use this data to achieve better pay in the long term by, for example, sharing their insights with trade unions and collaborating on campaigns and bargaining.

Initiatives with similar goals are springing up across the world. Common to most is worker ownership of the data they produce. It means that in disputes between workers and platforms, a worker-owned tool could provide verifiable data to challenge the platform. By working together and pooling their data, workers gain strength in numbers and mitigate the risk of simply being kicked off the platform.

Among these emerging platforms is Driver’s Seat, an app in the US that allows drivers for Uber, Lyft and other similar apps, to see when and where they can earn the most. Data like this would normally only be available to the commercial platforms, but because Driver’s Seat is driver-owned and transparent about how data is used, it’s putting power back in workers’ hands. There’s also Uber Cheats, built by a part-time Uber Eats driver and computer scientist in the US to help his fellow delivery workers track deliveries and pay. He found over 20 per cent of trips he analysed were under-paid, as the Uber Eats app was under-recording how far workers travelled. Thanks to this data, he managed to get Uber to pay him properly for his own trips.

Dr Colclough, when serving as director at UNI Global Union, worked with partners at Guardian Project, MIT Media Lab and Cambridge University to develop WeClock. The app allows workers to track a wide range of data produced while they work, such as a record of time spent in the workplace, whether proper breaks are taken, and time between shifts. The data might show that workers are putting in more hours than they are paid for or not given the breaks they are entitled to, helping them to gather evidence and build a case for change or compensation.

These new tools are not just the preserve of well-funded startups. In many cases, they are built by gig workers themselves, using their existing coding or copywriting skills. Boyan, for example, uses data skills gained from his new job in tech and his degree. It’s early days for many of these initiatives, with teams only just getting to grips with what is technically and legally possible, and the best tools to achieve their goals.

On top of fighting for better working conditions in the short-term, this idea of workers taking control of their data could feed into bigger conversations. This includes the future of platform ownership, and whether worker-owned platforms could one day become the norm.

For Roz Foyer, it is critical that unions embrace these new tactics and help to build digital tools that provide new ways of empowering workers. But Dr Colclough sounds an important note of caution, emphasising the need to avoid replicating the problematic aspects of the platforms workers want to challenge: “We have to be very, very careful that we don’t jump into this new technology without thinking about protecting the privacy of members,” she says.

Cailean Gallagher from the Workers’ Observatory sees benefits from this first wave of initiatives spreading into sectors that are rapidly becoming datafied – including care, construction and retail. He is also hopeful for deeper impacts, reshaping how we think about and organise working time and pay in future.

As he puts it: “In time, workers will find ways to harness their power against corporations and to turn their tools against them.”

Linkedin
RELATED ARTICLES
OTHER ARTICLES
After building his reputation covering the US civil rights movement in the 1960s, the photographer went on to produce some of the most enduring images of the past century.
From snake handlers to mardi-gras revellers, Tom “TBow” Bowden’s photos provide a snapshot of the wonderful and weird people who make up America.
Jeffrey Henson Scales intimate portraits and protest images of the BPP and its leaders offer a rare insight into organisation at a time of societal upheaval.
Yohon Tatum, aka Legendary Father of the House of Tisci, reflects on nurturing a new generation of talent.
Taking us through one of the most dynamic years in recent history, Laylah Amatullah Barrayn new photo book contains tender yet confrontational portraits.
A new podcast is opening up the conversation between trans women and trans amorous men in the hope of building coalitions.