News & Politics / How a four-day week could transform society 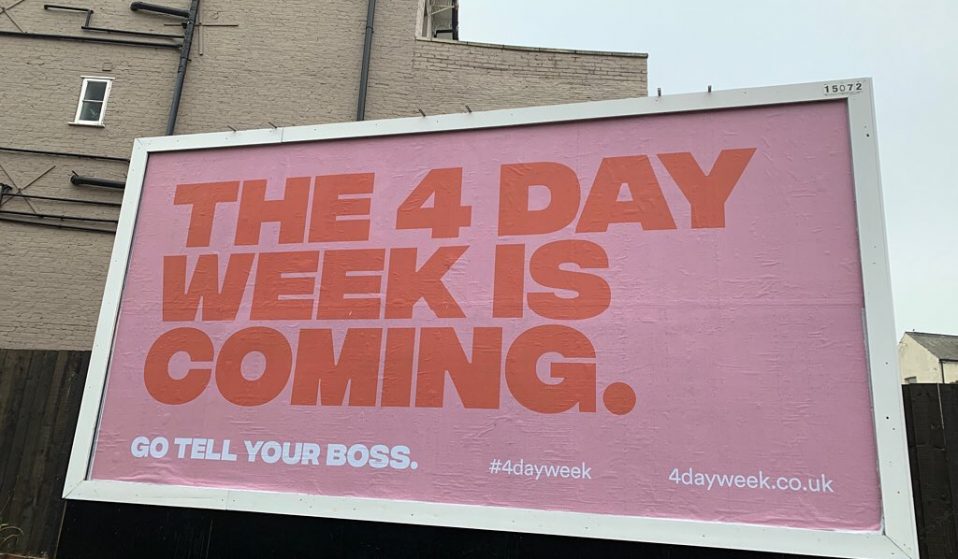 Ahead of the release of their new book, authors Will Stronge and Kyle Lewis tell us how reducing the working week could advance multiple social causes.

In a new book, authors Will Stronge and Kyle Lewis make the compelling case for reducing the working week. They tell us how this vital demand could advance multiple social causes.

The fight for freedom from work is one as old as capitalism itself, and it’s far from over. Time is a scarce resource in a capitalist society, and Overtime (Verso Books) – Will Stronge and Kyle Lewis’s manifesto on the four-day working week – is hoping to reignite the flame that has already won many workers the eight-hour day, the weekend, and the right to paid leave.

The authors, both researchers from think-tank Autonomy, put forward a compelling case for shortening the current work week, a policy that could see less overworking, more jobs, gender equality and a greener future. But it won’t come around by chance. Workers’ need for free time will forever be at odds with capitalism’s demand for it. Stronge and Lewis know this radical policy won’t be won without a battle, and trade unions, social movements and a rethinking of how we use (and who controls) technology will be core weapons in granting workers the freedom they need.

Huck caught up with Stronge and Lewis ahead of the release of Overtime to talk about the benefits of a four-day week and how we can get there.

You write that workers have been fighting for shorter working time for centuries. What does this say about our relationship with time, work and freedom?

Lewis: It reminds us that there is nothing natural about the amount of free time we have from work. The eight-hour day, the weekend, annual leave and maternity pay are all social and historical achievements that have been won by workers demanding an expansion of freedom away from the necessity of having to sell our labour for a wage. Although work for many people can be a hugely meaningful and fulfilling experience, we shouldn’t forget that workers’ struggles throughout history have not only been to expand benefits in work but also freedom from work.

We should realise both the precarious nature of these freedoms (many workers in the global south, for example, work seven days a week for poverty wages and very little time off) and that these freedoms can be expanded further through workplace and political action.

Stronge: There’s a tension that exists within a capitalist economy. On one hand, time is foundational for human freedom: it’s necessary to actualise our potential in whatever way we see fit. On the other, time is money – it’s a measure of production, salaries and profit. Through this tension, two competing demands run up against each other: those of the worker for more free time, and the business demand for longer hours, for squeezing more labour from workers. From this perspective, we can see that free time is rarely given to us. The fight has always been about normalising new standards for freedom so that, once established, people would have an interest in defending and expanding them.

You write that the standard five day, 40-hour work week wasn’t fought for and implemented with women in mind. How would the four-day work week benefit women?

Lewis: A major benefit of a universal shorter working week would be the lack of excuses men would have [for not] lifting their fingers and taking on an equal share of housework. Women tend to bear the brunt of work in our society: they are required to hold down and carry out a full-time career and are also burdened with the majority of essential, unpaid work that takes place in the home. Any reduction in working time must therefore be accompanied by a cultural change aiming to redistribute domestic labour across the genders.

Stronge: The other issue a four-day week would help in addressing would be gender inequality within employment itself. Despite the achievements of the women’s equality movement over the last century, women remain the primary carers, cleaners and emotional labourers of the formal labour market. Why are these forms of employment so undervalued? Care workers, nursery workers and pharmacy assistants all pay wages that on average are below the poverty line and the hours are often gruelling. While valuing these forms of work must involve higher wages, it must also mean fighting for a reduction in working time. The fight for control over time is at the same time the fight for gender equality.

Working from home was meant to emancipate us from the myth of the work-life balance, but it seems to have made it worse. If the workplace keeps us “unfree”, can a ‘work from home revolution’ be compatible with the fight for a shorter working week?

Lewis: I think we need to be cautious about the ways home-working is viewed as a ‘win for workers’. Of course, for some people, the experience of being able to work more flexibly during the pandemic has been a beneficial perk that has minimised some of the stresses and strains associated with the daily grind of commuting, for example. However, we must not forget that flexibility works both ways and a future predicated on home working could also be a future in which no matter where you are or what time it is, expectations from employers will dictate that you should be working.

If homeworking is to continue we need to make sure it genuinely benefits the lives of workers, by making sure legislation is in place for people’s right to disconnect from work after agreed-upon hours and that flexibility includes the demand to work less while retaining the same pay.

Stronge: Flexible working for vast sways of people in the UK simply means poverty wages, no sick or holiday pay and precarity. The sale and marketing of home working under the banner of flexibility can easily be translated as the pretext for reducing wages (some firms are already suggested lower wages for staff working from home) and increasing control via home surveillance. Again, instead of focusing too much on where employment takes place, we should instead demand greater control by reducing the overall time work occupies in our lives.

In the book, you say that working hours (and worker satisfaction) are often missing from green political and economic theories. Why is it important to have working time reduction as a central pillar of any post-carbon political economy?

Lewis: In the book, we try to emphasise that a shorter working week from an environmental perspective is both necessary and desirable. A range of studies have demonstrated the important and timely impact a four-day week would have on reducing carbon emissions on a global scale. And, reducing the amount of time we spend on the job whilst retaining pay has been an intrinsic aspiration of workers movements since the dawn of capitalism. If green political movements are going to cut through and gain traction with the electorate, they must offer new ways of living that can make a tangible improvement to peoples lives. Reducing the hours people work would help in communicating a green politics of aspiration and freedom rather than austerity or frugality.

Stronge: A small, but nonetheless important intervention we attempt to make in Overtime concerns a tendency in Green New Deal advocates to aggrandise labour and labouring. By creating a policy framework under the banner of a jobs guarantee or mass mobilisation, certain versions of a Green New Deal premised on creating a ‘labour intensive economy’ or a ‘carbon army’ lose sight of the failings of industrialism, with its arduous, repetitive and standardised work and moralising and damaging disposition towards the workforce.

We should instead utilise the opportunity afforded by the Green New Deal to be more imaginative and bold in what an environmentally just and sustainable future of work could be. Part of this vision should involve distributing work more equally (minimising underemployment and overwork) and creating new employment standards of working time.

You say that a shorter working week, despite being favoured by many, won’t come around without a fight. How important are trade unionism and collective action in the fight for the shorter working week and how can workers reclaim their bargaining power?

Lewis: I think it’s hugely important. Historically, the greatest reductions in working time have coincided with periods of trade union strength. This isn’t coincidental: it demonstrates the way organised pressure from below can create long-lasting improvements for both the workers they represent and society as a whole. While trade unions will play a significant role in winning a shorter working week, we shouldn’t forget its universal rollout will be won via the mobilisation of multiple forces in society. As we point to in the book, social movements can also play a significant role in demanding its implementation as well. From gender equality to climate justice, reducing the working week can be a progressive demand that is forwarded by multiple social causes.

Stronge: I think the pandemic has created a massive opportunity for workers to push for better working conditions. With labour shortages being experienced across nearly every low paid and highly exploited sector, now seems the ideal opportunity for workers to demand not only higher wages, but also contracts where precarity and overwork are no longer tolerated as ‘part of the job’. However, it is only that: an opportunity. It will thus require members of trade unions to push the issue of working time reduction up to the top of the agenda so that once again it becomes a staple demand in creating better working conditions for the members it represents. Thankfully, we’re seeing this happen more and more.

Linkedin
RELATED ARTICLES
OTHER ARTICLES
Following the release of his latest album God Don’t Make Mistakes, the rapper talks horror villains, police brutality and being unafraid to show his vulnerable side.
Photographer Phyllis Christopher recalls capturing sex and protest at a time when the city had become a haven for the queer community.
A group of Ukrainians living in Poland are helping Ukraine withstand Russia’s brutal invasion by buying supplies and shipping them directly to the war’s frontlines.
Writers Matt Foot and Morag Livingstone explore how four decades of collusion between the government and the police have slowly eroded our right to protest.
Shifting the focus from the cost of living crisis to tackling obesity while many starve or freeze is farcical and pointless, writes Fatzine founder Gina Tonic.
In the last of our dispatches from OFFF Barcelona, Rufus Deuchler and Vincent Gault discuss the future of creative process.