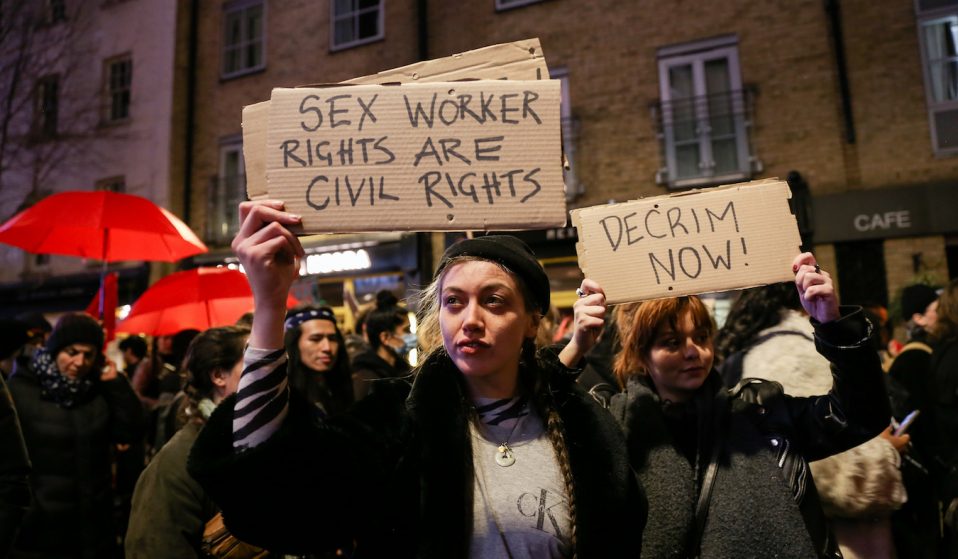 Financial turmoil is pushing people who work in the sex industry into more dangerous and desperate situations as a means of survival.

Financial turmoil is pushing people who work in the sex industry into more dangerous and desperate situations as a means of survival, reports Ella Glover.

“I’m afraid to set any boundaries now and just feel like I have to cater to a client’s every need,” says Emily*, a sex worker from the UK. “The stakes of missing out on work are so much higher now, and I think some clients are very aware of this.” Like many others, Emily is feeling the impact of the cost of living crisis. Looking for a place to privately rent has been a “nightmare”, she says, with landlords expecting “12 months of rent paid up front”.

“I’m currently house hunting but having to live out of Airbnbs because I need to be in the city I’m moving to to look at flats,” she says, “but it’s absolutely draining my savings.” The cost of living crisis, and the poverty it is steering millions into, is having a direct impact on the conditions of sex work, which is becoming more precarious and, in turn, more dangerous.

Sex work in the United Kingdom is, for the most part, completely criminalised. While the act of engaging in sex as part of an exchange of sexual services for money is legal, the law prohibits “solicitation” (meaning street-based sex workers just for being in their place of work) and two sex workers working together under the same roof, often for safety reasons, could be arrested under the country’s strict brothel-keeping laws. “We cannot even drive each other to bookings for safety lest we get done for human trafficking,” Audrey, of the United Sex Workers’ Union (USW), tells Huck. 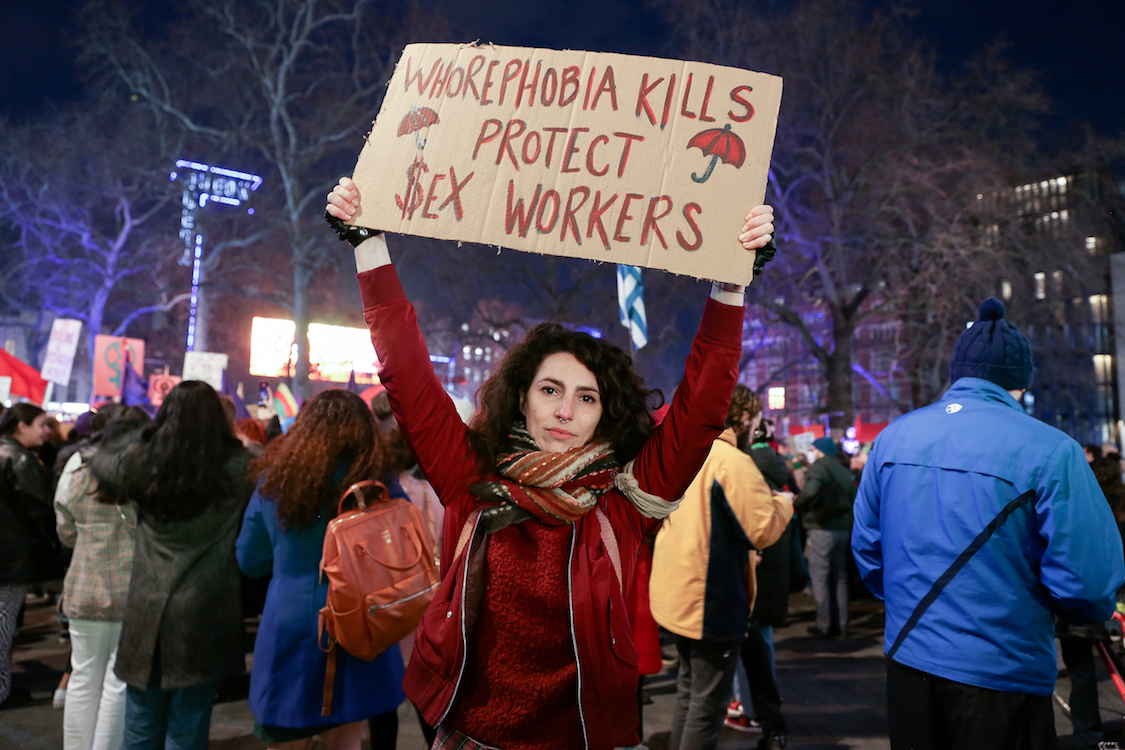 But this doesn’t stop people from getting into the industry – and the majority of sex workers, whether street-based workers, strippers or online sex workers and everything in between, do so for financial reasons. Other reasons, according to the USW, include flexibility – something that isn’t always afforded to those with disabilities or single parents.

“Poverty is the main driver for people to enter sex work,” says Audrey. “Whether it is a job market that is inaccessible to people with disabilities, gendered benefit cuts which disproportionately effect women, or workers turning to sex work as a second job because their wages do not cover their costs; the majority of those who enter sex work do so due to financial need.”

This is something Emily has experienced firsthand. She says that with the cost of rent and bills “always in the back of her mind,” she hasn’t always been able to turn down potentially dangerous clients or turn down sex acts she’s not comfortable with because she doesn’t want to risk losing a booking. Lauren*, another sex worker, has also noticed clients “asking for more for less money,” which is part of the reason she is attempting to leave the industry. This means that, while Lauren waits to start a new job outside of the sex work industry, she needs to rely on her partner to pay her rent. 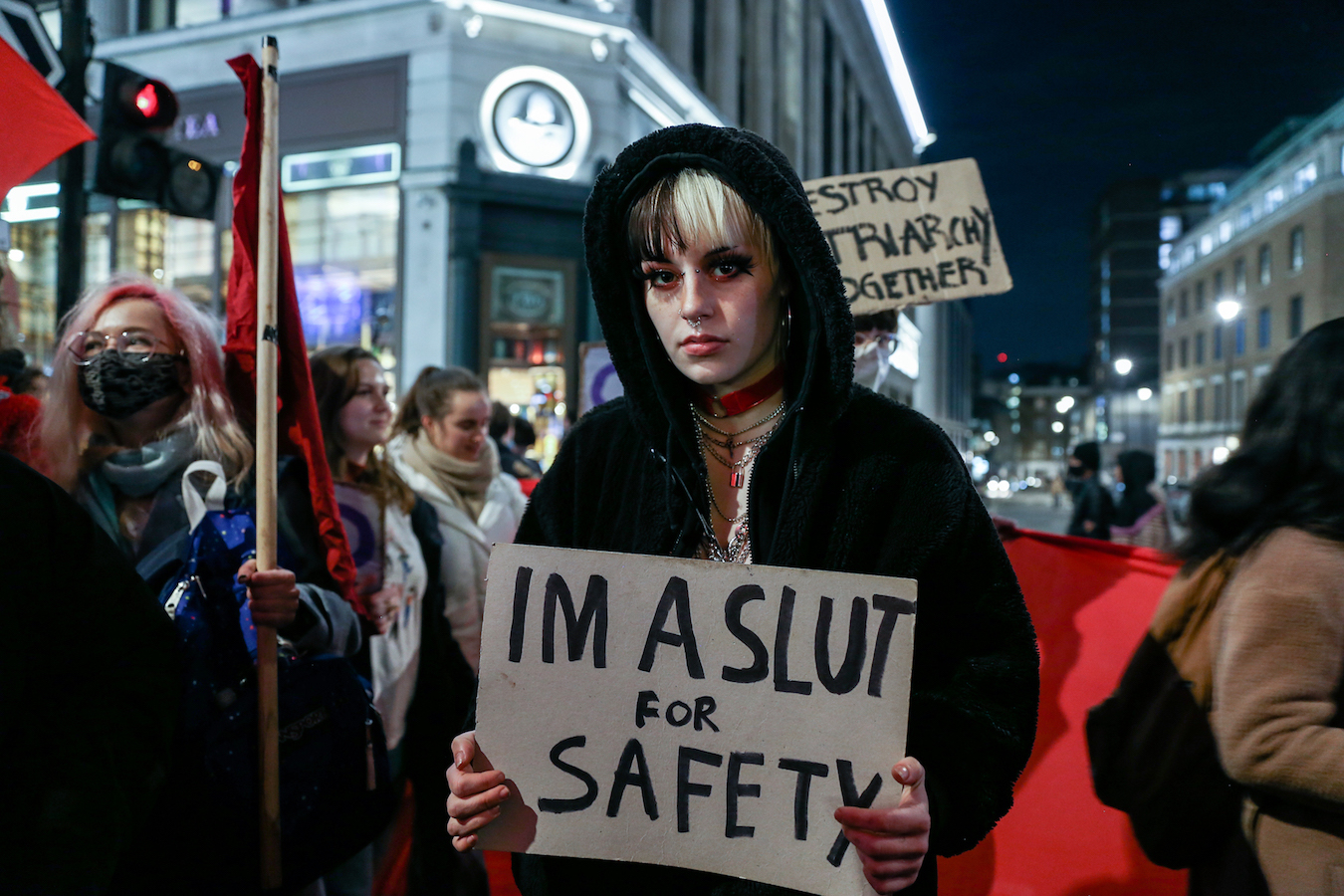 “They expect you to do additional stuff for the same price or ask you to reduce your price, using the excuse that prices are going up,” she tells Huck. “So now I’m getting a new job and I’ve started seeing fewer clients because I just don’t want to give them what they want for less – I’m sticking to my prices. In fact, I want to increase my prices. Because if prices are going up in general, why should mine go down?”

While Lauren is lucky to have an out, not all sex workers are. “As more people lose their homes, or as workers cannot afford to work in hotels or risk their landlord evicting them for being caught working at home, more workers will start in brothels or on the street, where they will face hostility from the police, such as arrests or brothel raids, and exploitative or dangerous working conditions,” says Audrey.

She adds that transgender, migrant and low-income sex workers are disproportionately at risk of finding themselves in this kind of work. “An urgent need for money, inaccessible job markets, bigoted hiring practices, and the disproportionate number of trans people who experience homelessness, will force these workers immediately into criminalised forms of sex work such as brothel or street based work.” Street and brothel workers are more at risk of poor conditions, such as having to work for unscrupulous bosses or, due to the UK’s anti-sex work laws, being forced to  work in isolated areas away from both police presence and any help in the face of dangerous clients. 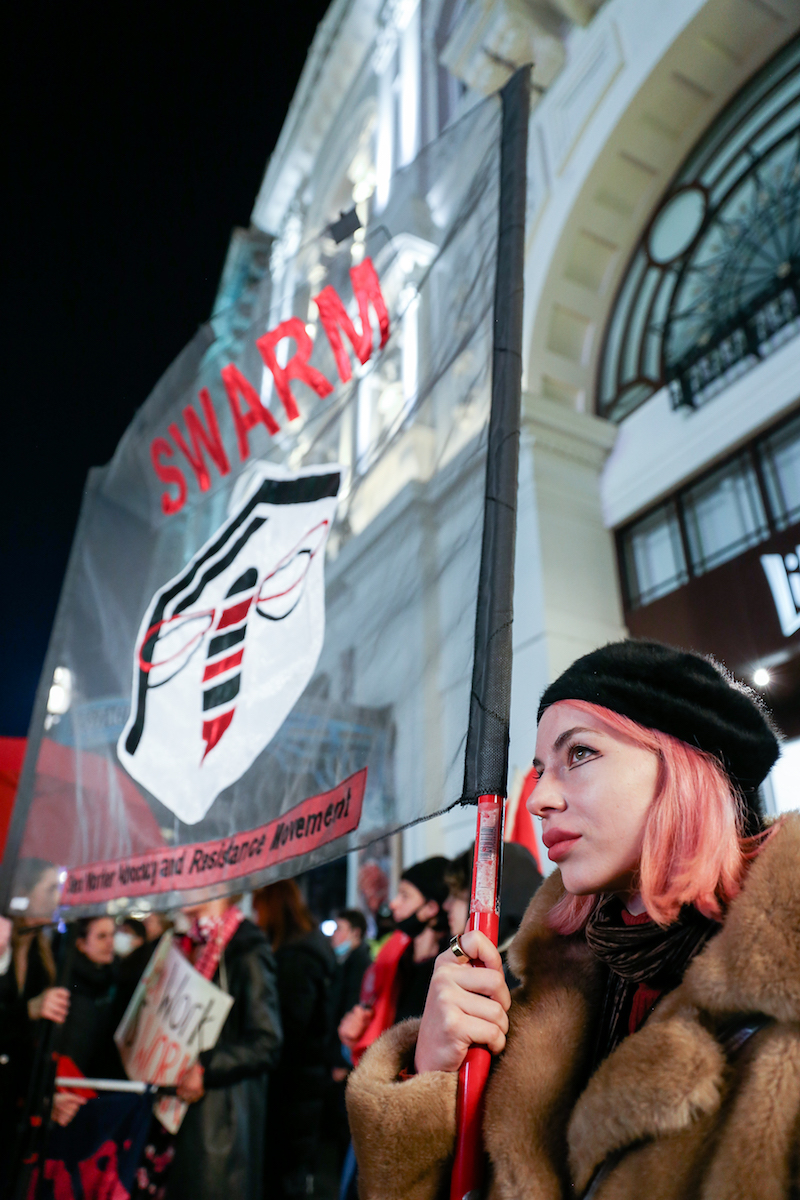 Emily says that less willing clients who are also “feeling the pinch”, coupled with more workers joining the industry in the face of the crisis, is adding to the problem. In June, The English Collective of Prostitutes said it had received an influx of calls from people looking for advice on how to start sex work, including those who had already left the industry deciding to return. For Emily, this means more competition: “I’m just so aware that opportunities are, and will continue to be, fewer and farther between.”

And all of this means that sex work is becoming less flexible as a job. Clara* tells Huck she got into sex work because it’s “one of the few jobs” she can access while having chronic fatigue syndrome. “Being able to not go to work when I had a flare up really helped me manage it,” she says. But, she adds, the anxiety of work drying up coupled with higher bills has caused her to work on days where she’s been in so much pain she “can hardly get out of bed, feed myself or manage chores”. This, of course, has worsened Clara’s chronic pain overall. “I haven’t been able to access any support from an overworked and underfunded NHS, I’ve been struggling with addiction and drug use to cope,” she adds. (Dealing with substance abuse is another key reason for people getting into sex work.)

Emily, who also suffers from an undiagnosed chronic illness that causes fatigue and pain, says that she can’t afford to take time off during flare ups. She was also unable to take time off after being assaulted by a client at work, who did things she did not consent to. “I’ve basically been crying before every booking that I have,” she says, “because I just need some time just to collect myself at the moment, and I can’t afford to take it.” 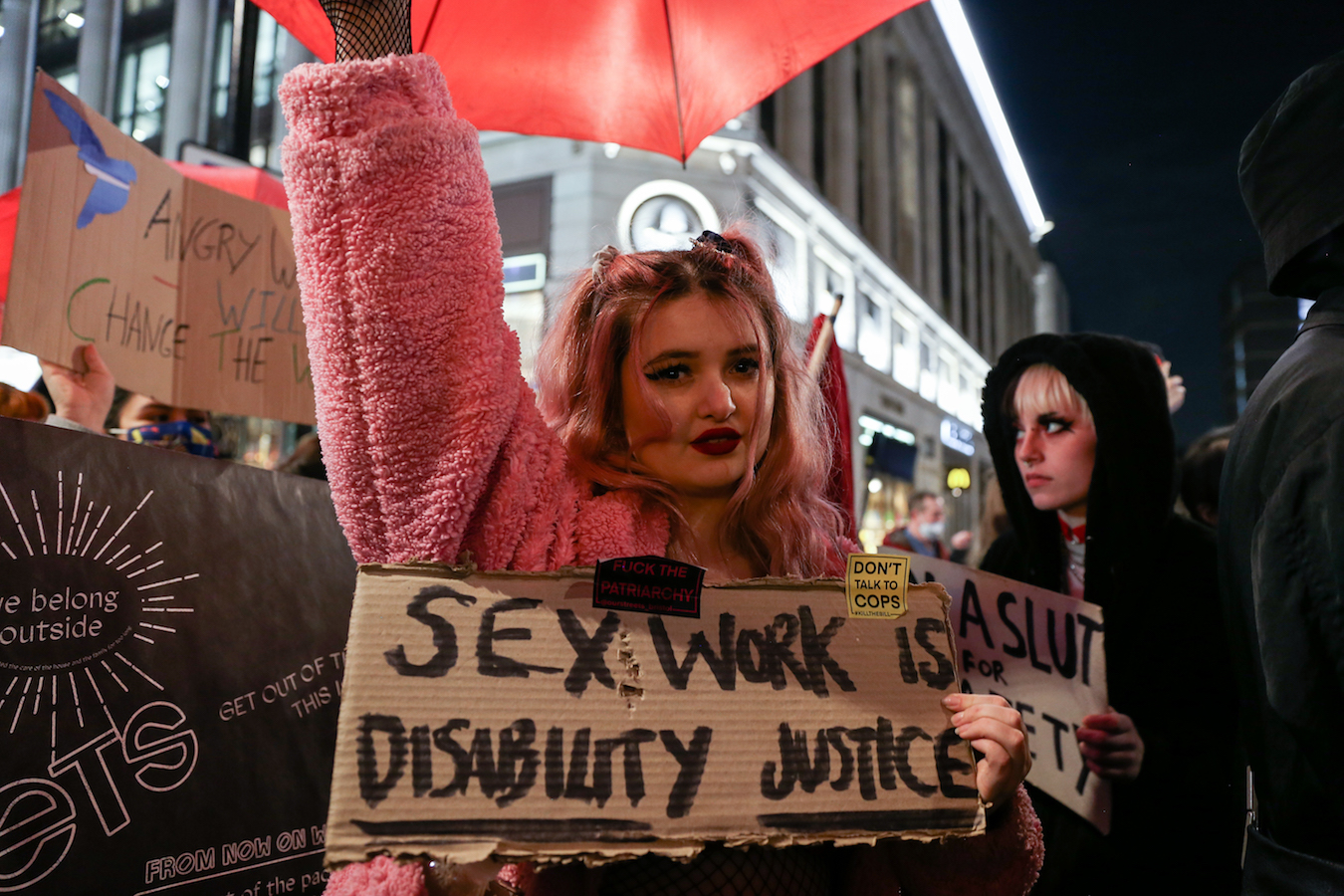 In a criminalised industry, these types of problems are to be expected. As Molly Smith and Juno Mac write in their book Revolting Prostitutes: The Fight For Sex Workers’ Rights: “Almost all sex workers are in the job because they need the money. When made to pick between their income and making bad bosses or rapists accountable, the sex worker has no choice but to tolerate bad conditions.”

Phoebe, a spokesperson for The English Collective of Prostitutes, which supports full decriminalisation of the sex work industry, tells Huck that people getting into sex work are in danger, as the organisation isn’t allowed to tell workers what they can and can’t do, because it’s breaking the law for incitement.

“We think the law should be removed and health and safety legislation instead put in for sex workers rather than these laws,” she says. Currently, she adds workers have to choose between their own safety and breaking the law. “You can’t work with others for safety without being arrested or, and you can report violence to the police without fear of arrest yourself.”

While thousands of workers in the UK strike for better pay and conditions, sex workers are left silently accepting theirs getting worse and worse – there has never been a clearer cut case than now to give sex workers what they deserve: real workers rights, which can be achieved through decriminalsation.

As Audrey says: “With decriminalisation, workers can access union representation, worker protections and legal representation to make our workplaces safer. We can organise to change our working conditions, we can hold clients to better standards of safety, without worrying that we will also be penalised under law.” As a union, she says, the USW has fought against the closures of strippers’ workplaces, represented workers in disputes against discrimination from banking providers and have even recovered money from a client who refused to pay for a full service worker’s labour. “Imagine what we could do for sex workers’ rights under decriminalisation.”

Linkedin
RELATED ARTICLES
OTHER ARTICLES
Financial turmoil is pushing people who work in the sex industry into more dangerous and desperate situations as a means of survival.
A 37-year-old woman shares how her abortion led her to become a clinic worker, and the abuse she’s received in that role.
With skyrocketing rents, packed out viewings, bidding wars and more, renting in London has never been harder.
By turning a real-life crisis into daytime television fodder, TV bosses have once again shown themselves to be completely out of touch with audiences.
In his 2008 series, the photographer pictured himself as Angela Davis, Martin Luther King Jr., Malcolm X, and other prominent figures.
Birdy Chu reflects on documenting the historic moment in which the territory was formally passed back from the UK to China.