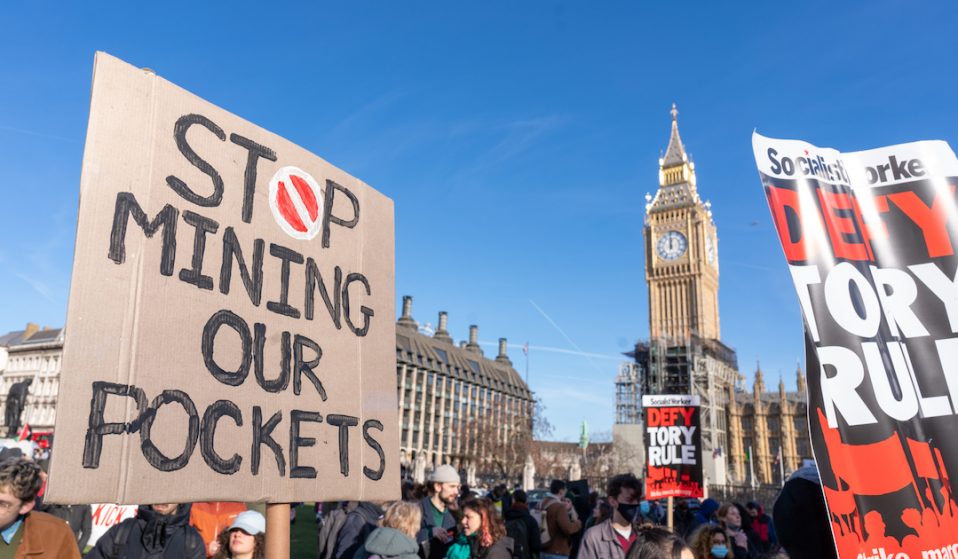 For asylum seekers, who are given a paltry sum to live off by the Home Office, rising prices are set to make a desperate financial situation even worse.

For asylum seekers, who are given a paltry sum to live off by the Home Office, rising prices are set to make a desperate financial situation even worse.

UK inflation is rising at its fastest rate in three decades, resulting in a disaster for living standards. Food prices have surged: compared to last February, the cost of fruit has risen by 6.2 per cent, vegetables by 4.2 per cent, meat by 5.2 per cent and bread and cereals by 4.9 per cent, while wheat shortages sparked by the war in Ukraine are expected to push prices even higher. It’s a similar story for other essentials, with clothing and footwear costs increasing by up to 8.8 per cent in the same period.

Price increases always hit the most vulnerable in society the hardest. And for asylum seekers like 26-year-old Jannat*, who are banned from working under the UK’s immigration rules and given just £5.84 a day to live on, it’s made what was already a desperately tough financial situation even worse. “Even if it’s a 20p increase, it makes a huge difference in our budget,” she says.

The UK’s economic picture is only expected to worsen, with the Bank of England predicting that inflation will soon reach eight per cent. Yet the Chancellor Rishi Sunak’s Spring Statement lacked any measures that will make a difference to people seeking asylum.

Already over the last few months, Jannat, who lives in Newcastle, has noticed the price of meat, bread and other items at her local halal shop creeping up. “Things that were available at £2.99 are now £3.99,” she says. The price of a bus ticket in the North East has also become more expensive. “Before, if you bought a ticket after six o’clock it was £1,” she says. “Now, if you buy a single, it’s £1.60.”

With more of her money now going towards food and travel, Jannat has had to stop buying clothes and topping up her phone as frequently. She increasingly relies on free public WiFi – something made harder by the fact she’s been housed far from the city centre.

Policy changes over the last 20 years – from scrapping the right to work to the outsourcing of housing contracts to private providers – have made life increasingly difficult for people seeking asylum in the UK. Meanwhile, “hostile environment” policies introduced when Theresa May served as Home Secretary fostered a climate of suspicion which has seen some asylum seekers denied their rights and legal aid for immigration slashed.

It stopped tracking mainstream benefits in 2008 and hasn't had the £20/week COVID19 increase that Universal Credit has. #StandUpForAsylum pic.twitter.com/GWYn8tE6tG

The government’s Nationality and Borders Bill, which is currently making its way through Parliament, will only make things worse. Under its reforms, asylum seekers who arrive in the UK via channel crossings or without prior permission could be criminalised and face four years in jail, while anyone seeking sanctuary could be sent to “offshore centres” while their asylum claims are processed.

Peace*, a 29-year-old Nigerian living in Glasgow, has been waiting two years for a decision on her asylum claim. Like Jannat, she’s felt the impact of the cost of living crisis recently: a £15 shop at Lidl doesn’t stretch to nearly as much as it used to. And while buying the lactose and gluten-free food she needs for health reasons has always been expensive, price rises mean that now it’s “almost impossible” for her to afford.

Surviving on asylum support means that Peace is constantly having to weigh up one essential need against another. “Sometimes I have to choose between buying data for my phone and food,” she says. “It’s really challenging and frustrating.” She wishes she could replace her malfunctioning phone, but the price of a new one is far beyond her means.

Wilhelmina Perry, Groups Coordinator at Praxis – a human rights charity supporting migrants and refugees – says people seeking asylum can barely afford to cover the bare essentials, let alone anything that might “make them feel like a human being”, such as a haircut or a pair of shoes.

The situation is even more desperate for people housed in hostels, rather than in temporary accommodation, she says. As meals are provided, they are given just £8 a week to live on – an “insane” sum considering that travel alone for those living in outer London costs £15 a day, Wilhelmina says.

It means that charities are left “picking up the slack” and covering travel expenses just so people can access vital advice sessions and English lessons. “The charity sector is struggling itself,” Wilhelmina says. “It’s concerning. We can’t cover everything that’s needed.”

Amy*, an asylum seeker from India who is in her 40s, says that if charities didn’t cover the cost of bus travel to her support group meetings, she wouldn’t end up leaving the house at all.  She knows all too well what it’s like to have no support. When she was first housed in Leeds back in 2016, she was “not aware of any organisations”. “I knew nobody,” she says. “I was just sitting in my room… I was going through bad mental health issues.”

Things are easier now that Amy is in touch with refugee services. But recently, the rising price of food – particularly chapatti flour, rice, lentils and mung beans – means she can’t afford to make the food she usually eats. “This amount of money is really hard for day-to-day life,” she says.

Charities have long argued that the asylum support rate – designed to cover essential living needs including food, medicines, toiletries, travel and communication (furnished accommodation and utilities are provided) – falls far below what’s needed to get by. Tim Naor Hilton, CEO of Refugee Action, says the £5.84 per day allowance had “always been miserly”. “However, in the context of the biggest cost of living crisis for decades, it represents state-sponsored cruelty,” he says.

A 2020 survey by Asylum Matters found food insecurity to be a serious issue for people living on asylum support. More than 80 per cent said they either sometimes or never had enough money to buy the food they needed.

Emma Birks, campaigns manager at Asylum Matters, says that since the survey was carried out, the cost of food and other necessities had risen “exponentially” – yet this year, the Home Office had increased the support rate by just £1.22 a week, to £40.85 per person.

A Home Office spokesperson said: “Asylum seekers needing long-term temporary accommodation are provided with fully furnished housing, where all utility bills are paid, in addition to receiving a cash allowance of £40.85 per person per week for essential living expenses. This amount is reviewed every year to reflect the changing costs of living.”

According to Emma, this is simply not sufficient. “We cannot see how people are possibly going to be able to afford to support themselves and their families on such a paltry amount of money,” she says. “At the same time, the UK government continues to refuse to allow people seeking asylum the right to work and a route out of enforced poverty – despite strong and growing cross-party calls for reform.”

Most asylum seekers in the UK are not permitted to work, despite years of campaigning by charities under the ‘Lift the Ban’ coalition. While people who’ve waited more than 12 months for their asylum claim decision can technically apply for a job, the fact they are restricted to roles on the Shortage Occupation List – which includes skilled ballet dancers and geophysicists – means that few are successful. (The government argues that the right to work would act as a ‘pull-factor’, attracting more people to apply for asylum in the UK instead of elsewhere, despite failing to provide any evidence to prove this.)

At the same time, the Home Office is taking ever longer to make decisions on granting people refugee status – and with it the right to work. The latest figures show the number of claimants waiting more than six months has soared to record levels.

Jannat has been waiting nine months for a decision. Like Amy and Peace, she keeps herself busy by volunteering at different organisations, where she has become a skilled and valued team member – but not being able to work takes its toll. “It’s a terrible feeling to be a young person with knowledge and skills and not having the opportunity to work,” she says. “It’s like mental torture for me, it’s like a punishment.”

She was hurt to hear the government announce that Ukrainians granted sanctuary in the UK will be permitted to work immediately. “We also have qualifications and skills, but the government doesn’t allow us to work,” she says. “If you set some rules, it should be equal for all – it should not be divided because of countries.”

But it appears MPs disagree. Last month, they rejected an amendment to the Nationality and Borders Bill which would have given all people seeking asylum the unrestricted right to work after six months. Peace is urging people to support the right to work campaign, as well as to oppose the Nationality and Borders Bill. “If people can come out and say ‘we don’t want this bill, we want it amended’, I think it would really go a long way and would really mean a lot to most asylum seekers,” she says.

Peace, who dreams of becoming a nurse, adds that the “rigid” and “dehumanising” restrictions needs to change. “They need to consider the fact that we are also human,” she says. “We’re just like every other person.”

Linkedin
RELATED ARTICLES
OTHER ARTICLES
After news broke last week around an expected reversal of the 1973 landmark law that made abortion legal in the US, protestors gathered in the UK in support of American women.
The failure to hold landlords to account is denying tenants their basic dignity, writes Bella Saltiel.
The government’s failure to take long Covid seriously has led to the formation of a group campaigning for the thousands of forgotten victims of the illness.
The revered showbiz chronicler recalls his journalistic beginnings, documenting subcultural scraps in the ’80s.
In our first OFFF Dispatch piece, the Arce Studio founder shares her tips on standing out from the crowd.
From the Yakuza to a biker gang, Bruce Gilden recounts capturing Tokyo and Osaka in the ‘90s.