News & Politics / How yoga teachers are exploited by the gig economy 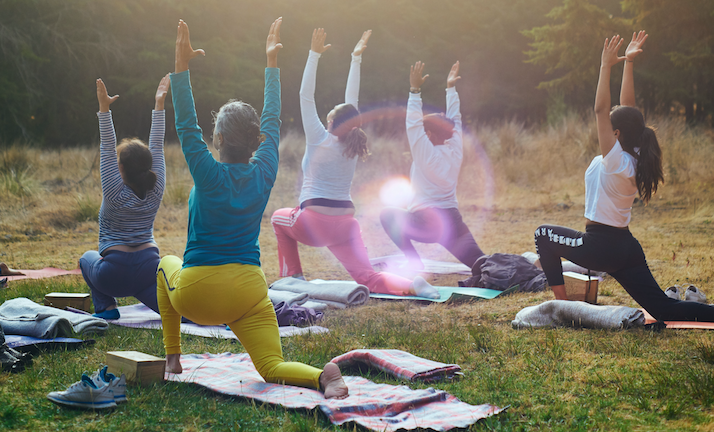 The wellness industry may be booming, but many yoga teachers are struggling to make ends meet as countless tech start-ups, apps and large gym chains monopolise the market and undercut pay.

The wellness industry may be booming, but many yoga teachers are struggling to make ends meet as countless tech start-ups, apps and large gym chains monopolise the market and undercut pay.

When MoveGB arrived in Bristol a few years ago, it seemed like a real victory for the city’s booming yoga community. The app allows users to pay a subscription fee to access pools, gyms and classes in studios across the UK, including yoga lessons. For yoga teachers, it meant better outreach to potential students, free advertising and a central platform for organising classes.

“At first we did really feel the benefit,” explains Ellie*, who has taught yoga in the city for years. “Everyone signed up and everyone loved it.” But then, once vast swathes of the city’s studios were signed up to the app, MoveGB changed the terms and conditions for teachers. The app now used a ‘shared revenue model’ that saw teachers earning 40 per cent less than they were normally, and facing Covid restrictions on classes, it left many unable to even make money. But the influence the app had in the city and the number of customers now using it exclusively to find lessons meant teachers struggled to leave it.

“It monopolised this whole city,” says Ellie. “And once it turned, we couldn’t get out of it.” In the end, the struggles with MoveGB, alongside other changes within the industry, drove Ellie to abandon yoga teaching in recent months.

A spokesperson for MoveGB told Huck they acted regularly on any constructive criticism from partners and stressed that teachers have complete control over their class pricing. They also highlighted the impact of the pandemic on the sector and how the company had shifted to online services during Covid to deliver £1m for their teaching community in Bristol.

It wasn’t the first time Ellie had faced a problem like this. She tells me that before MoveGB, her studio had experienced serious issues with another new app, ClassPass. Similar to MoveGB, the app offers space at participating studios for its users and cuts teachers in for a share of the profit. When one freelance teacher at Ellie’s studio signed up for ClassPass, however, the company then signed up every teacher and class listed on the studio’s website on the app without any consent or contract.

The studio’s teachers only realised the problem when students started arriving for classes that the teachers were neither aware they were attending or had paid for. For Ellie, there were added worries. She runs a variety of LGBTQ+ safe space classes that were at risk of being attended by random ‘unsafe’ people. While ClassPass told her it was an accident and resolved it soon after, Ellie tells me it undermined safety at the studio in an industry already dealing with some endemic issues around sexual violence and consent. When contacted by Huck for comment, Classpass did not respond to allegations made by interviewees.

While the problem may have worsened during Covid, the decreasing pay and lack of security Ellie faced was nothing new. “Precarity is the defining feature of the yoga industry in the UK,” explains Simran Uppal, who helped launch a trade union branch for yoga teachers with the Independent Workers Union of Great Britain (IWGB) trade union. “It’s normal now in the industry not to be making more than literal poverty pay with extreme insecurity.”

IWGB polling has suggested that around 60 per cent of teachers earned less than living wage before the pandemic. The union also estimates that just four per cent of yoga teachers have worker status and the statuary rights like sick pay and minimum wage that come with that, while only 19 per cent have any form of written contract.

But despite all the problems facing teachers, the yoga industry has never been more profitable. While lockdown has badly hit yoga, like so many other industries, before the pandemic, yoga was a £900m a year industry in the UK alone. What once was a niche job hosted in village halls and small studios has skyrocketed into a billion-dollar worldwide industry thanks to an increasing focus for people on wellness and self-care. Teachers say the industry has become dominated by countless tech start-ups, apps and large gym chains all looking to monopolise the market and undercut pay.

One of the biggest issues comes down to wages. Yoga teachers are frequently only paid on a per-class basis, not by the number of pupils attending – usually a flat fee of anywhere from £12 to £25. But that money only applies to the classes themselves, not the travel, preparation, set-up time, administrative work and so on, that has to go into making the class happen. The teachers Huck spoke to all said the average one hour class would take up an extra two or three hours of work at least, for which the teachers are rarely, if ever, paid. As an example, Simran tells me during their busiest times as a teacher, they would leave the house at 6:30 am and arrive home at 11 pm but only be able to teach a maximum of four, maybe five, lessons a day. As a result, it’s often normal for teachers to earn less than the minimum wage for their work.

That same struggle to secure the legal, minimum wage shows just how much yoga teachers have in common with employees at quintessential ‘gig economy’ companies like Uber. Despite Uber being forced by the Supreme Court to recognise drivers as workers and assure them protections like the minimum wage, many still aren’t earning that minimum wage because the company only supports their pay after drivers accept a trip, not while waiting to be assigned fares.

“Yoga is exactly the same as every other aspect of the gig economy,” explains Mali Bowers, a yoga teacher and IWGB activist. “These issues around hourly pay and who gets to decide what’s work and not… it’s just people not respecting the relationship between time and money and work. That’s all its ever been.” And Mali wasn’t alone – every teacher Huck spoke to said they felt the industry, with falling pay, protections and security, had become almost entirely ‘gigified’.

“It’s the exhaustion of doing that work with lack of security for any future work,” says Simran. The overwork often severely damages teacher’s health, but then, in turn, they are often too desperate to work to be able to stop when they do get ill.

Simran says that on one occasion, they were forced to teach classes and attend job interviews while dealing with a severe gastrointestinal illness. Once, they had finished the interview, they collapsed in a nearby cafe and had to have someone put them in a taxi home. He also tells me of one teacher who had to finish a class after their eardrum exploded and started badly bleeding because they couldn’t risk losing the income and damaging the relationship with the client.

The yoga branch at IWGB was born from that disparity between teacher’s pay and company profits  – the feeling that “our industry was not working for us”, as Simran put it. Launched earlier this year, the union wants to try and break the precarious gig economy model increasingly dominating the industry and give better pay and security to teachers working in the UK. While still in its early days, the branch is now working on growing its numbers, establishing demands for fair pay as well as heavily campaigning for this year’s ‘Kill The Bill’ protests. In fact, the union has been almost entirely set up and run online, and those protests were the first time all its leaders met in person.

But if the union strives to achieve one thing, it’s to break the misconception that yoga teachers are spiritual beings divorced from the material world, rather than underpaid, overworked employees in one of the UK’s newest gig economy sectors. “There’s this image of yoga teachers swanning through the world completely above any of these basic issues,” explains Simran. “But fundamentally, yoga teachers are workers like everyone else just trying to pay their rent and struggling to survive.”

*Some names have been changed to protect anonymity

Linkedin
RELATED ARTICLES
OTHER ARTICLES
Jeffrey Henson Scales intimate portraits and protest images of the BPP and its leaders offer a rare insight into organisation at a time of societal upheaval.
After a two-year hiatus and a new album, the Nigerian artist is riding high. Now, he wants to bring his alternative, genre-bending sound to the world.
A new film from Berghaus traces the story of Adam Raja, who left behind a turbulent upbringing to discover the healing power of climbing.
The first-generation graffiti artist reflects on the tagging’s emergence as an art form and the players who pushed the medium forward.
Mass crustacean die-offs in the North East have led a community of fishermen to take action to save their seas.
Photographer Sean Maung reflects on documenting a small town in Pennsylvania afflicted by high levels of unemployment, poverty, violence, crime, and addiction.