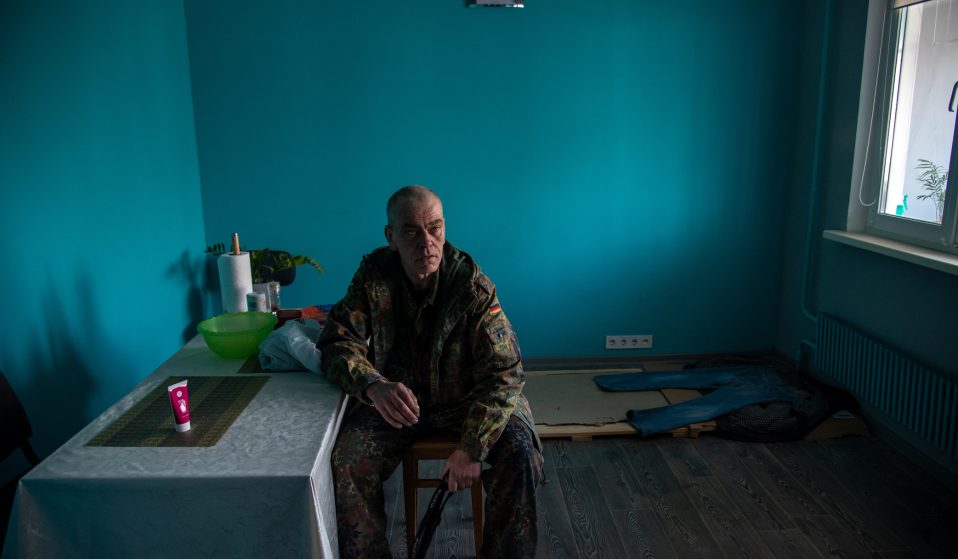 Photography © Seth Berry (Pictured: Alexander, 57, inside his neighbour's apartment where he now stays after his was destroyed.)

In the second most shelled city in Ukraine, residents determined to stay in their city have been forced to shelter in cramped metro stations or risk their lives staying in residential buildings.

In the second most shelled city in Ukraine, residents determined to stay in their city have been forced to shelter in cramped metro stations or risk their lives staying in residential buildings.

At the entrance of Heroiv Pratsi metro station in Kharkiv, Ukraine, many people are gathered; smoking, talking on the phone or simply waiting. It seems quite normal. But below the ground, down the long stairwell, it quickly becomes apparent that there is nothing normal about this situation. After passing through the turnstiles, humidity lingers in the air, and down another stairwell, hundreds of people are living on the main platform, on the stairs themselves, and even inside immobile train cars.

They sleep on makeshift beds splayed across the cold tile. Some create living cubicles made from cardboard. Others have the small luxury of sleeping on a bench inside the parked train car. They have been here for over a month, since the war began, seeking safety from the constant bombardment by the Russians.

“Sometimes, I confuse day and night being here in the metro,” says Illyana Titova, 62, who has lived in Heroiv Pratsi since 28 February 2022. “I hope the war ends soon. I have very troubling thoughts here. Some say it will end soon, but really nobody knows.” 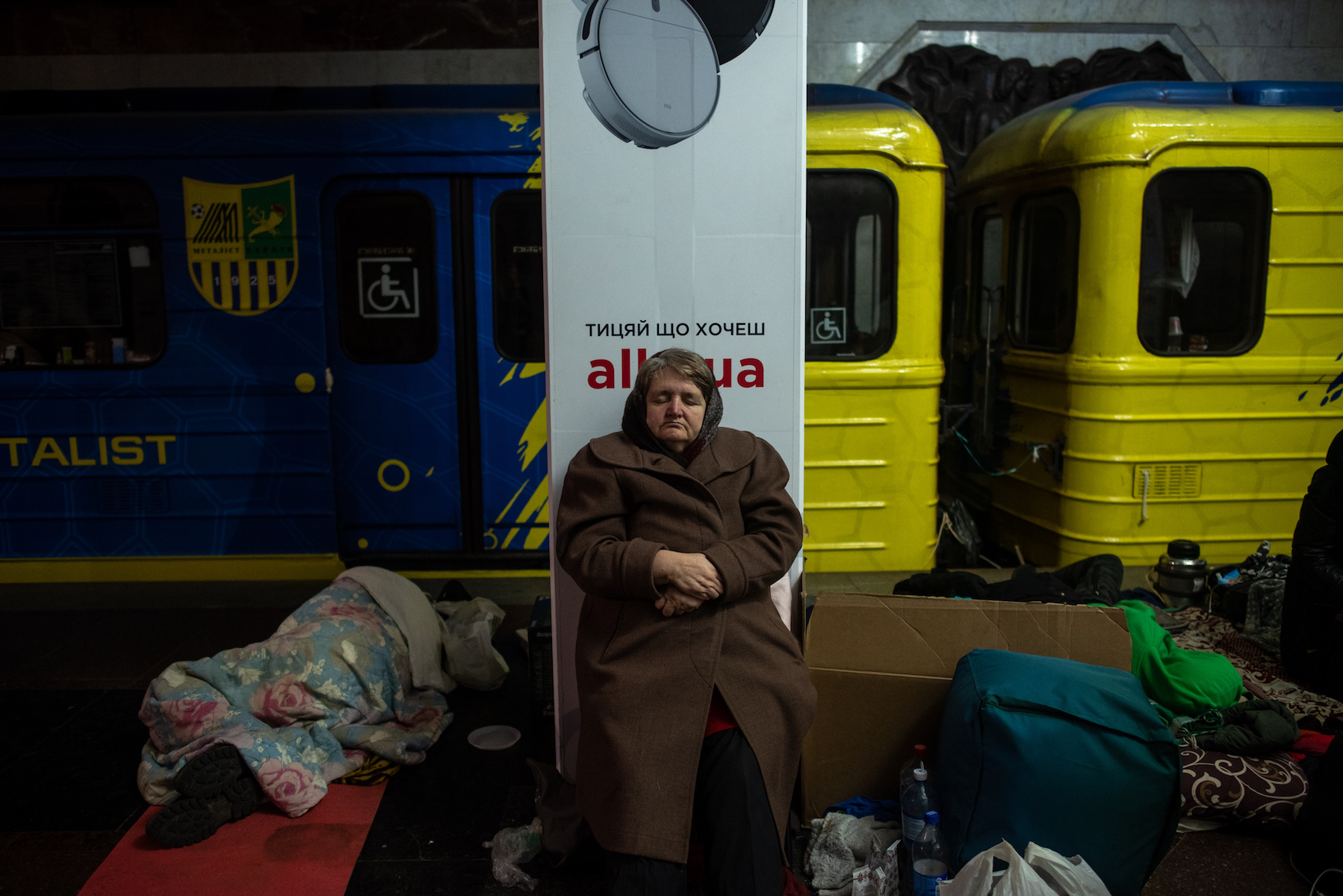 Illyana Titova, 62, sleeps in the Heroiv Pratsi metro station, where she has stayed since the war began.

At the start of the war, Kharkiv’s city centre was attacked ruthlessly, destroying apartment buildings and killing civilians while targeting the Ukrainian intelligence building and the Mayoral office. Since then, the Ukrainians have been able to hold a frontline northeast of the city limits.

As the Russian military begins to abandon hope in the Northern Region of Ukraine, publicly stating they will slow down aggression toward the capital of Kyiv, in the Eastern part of the country another attack looms as Russia reorganises. The Ukrainian ministry of Defense recently stated that an attack on Kharkiv is imminent.

Kharkiv, the second-largest city in Ukraine, just 25 miles from the Russian border, has strong Russian roots – everyone here speaks Russian rather than Ukrainian. Moscow assumed it as an easy target for occupation. That hasn’t been the case. Ukrainians fought back and now shells explode every day – night and day – mostly in the residential areas closest to frontlines. In fact, it is the second most bombed city after Mariupol, which has seen some 90 per cent of its building decimated. The same tactics are being deployed by the Russians: after stalling on in the combat zone, airstrikes are used to target schools, hospitals, and residential buildings, instilling fear into the civilians who decided to stay. The ones who stayed are now forced to shelter in cramped metro stations or risk their lives staying in residential buildings that have already been targeted by missiles. 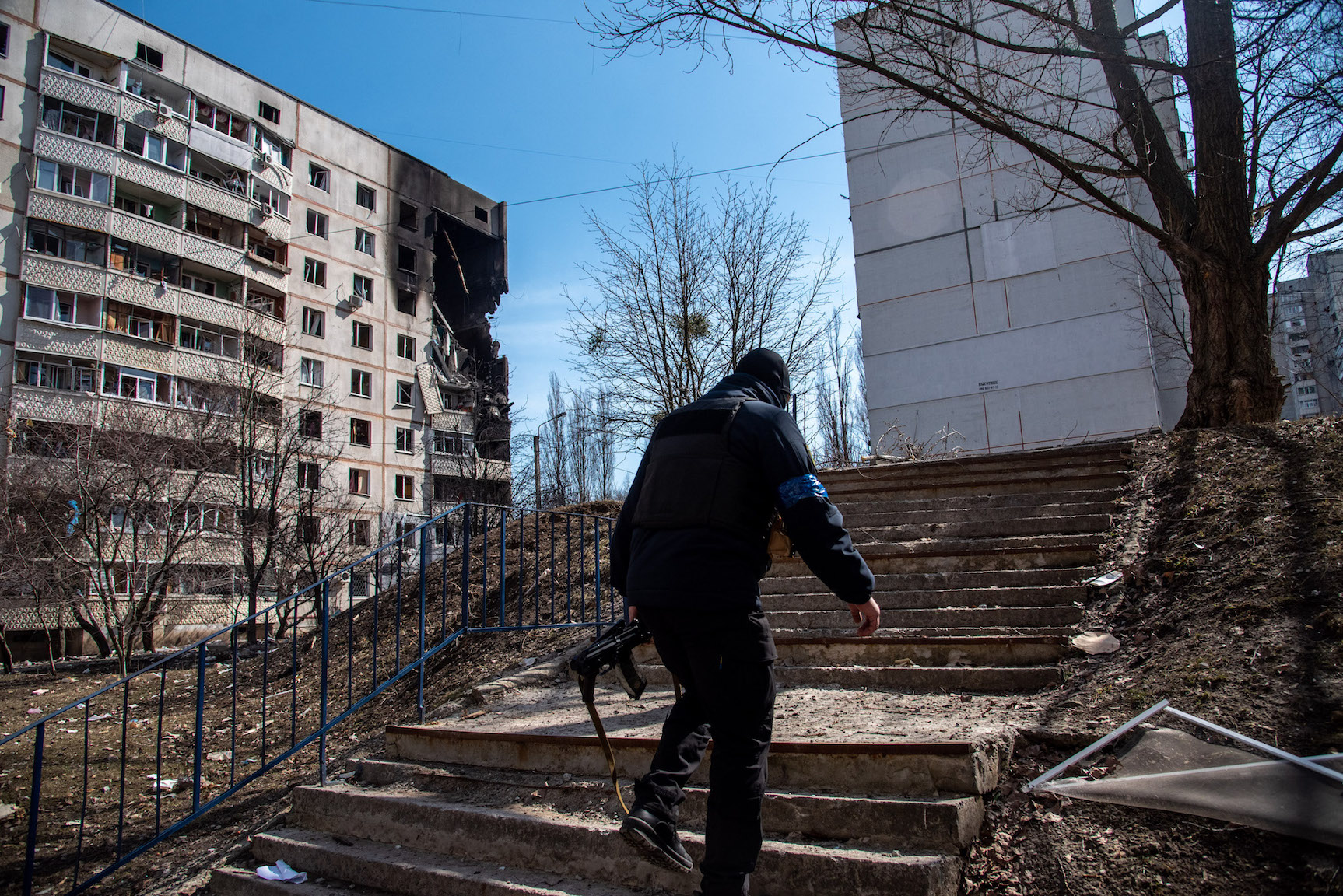 A Ukrainian police officer walks through the residential Saltivka district which has been heavily bombarded. 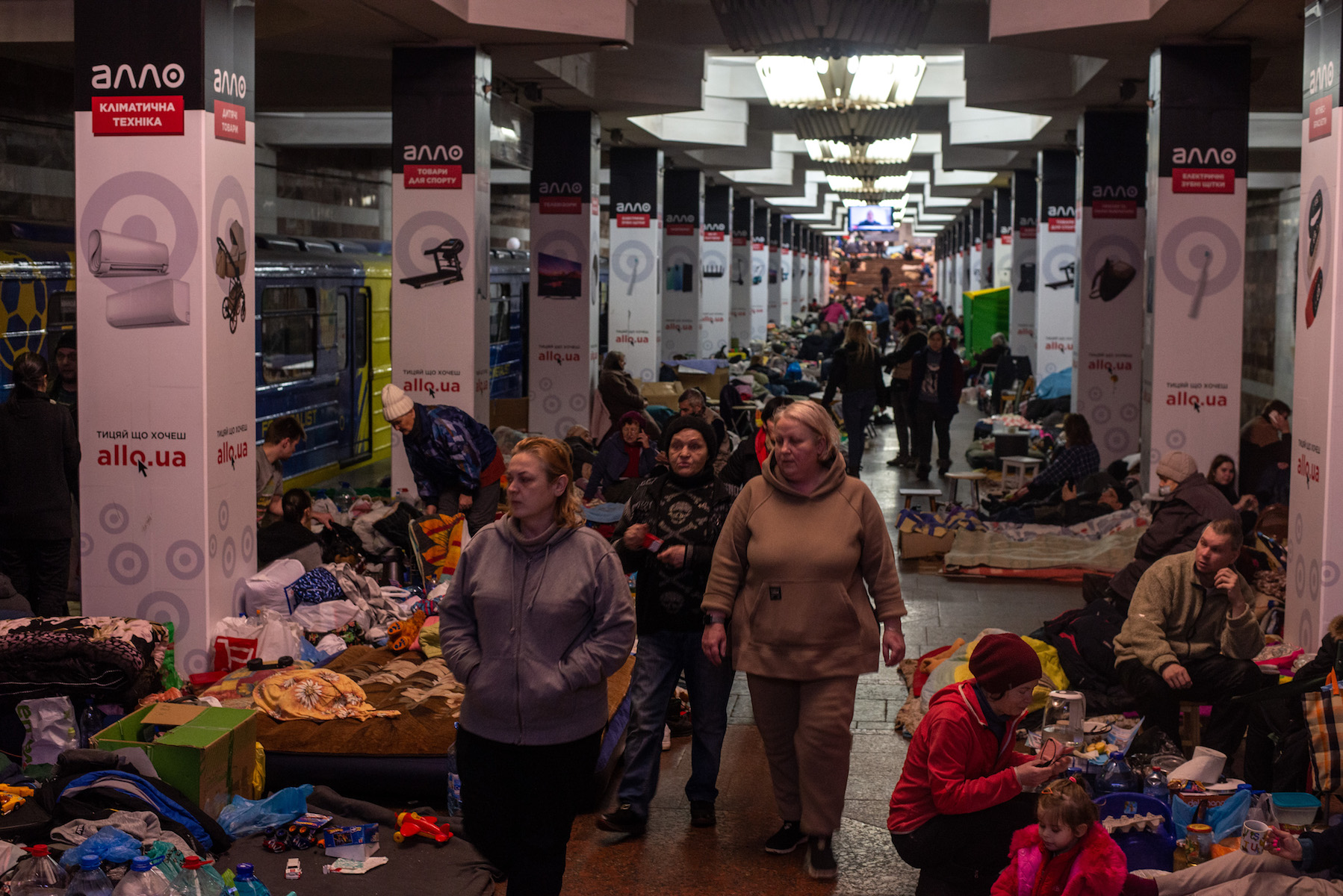 The Heroiv Pratsi metro station in Kharkiv, where people have been sheltering for over a month.

Despite the constant threat of bombardment – the echoes of rolling thunder from airstrikes can be heard every hour – some have decided to stay in their residential buildings, even some that have already been hit.

Alexander, 57, a resident of an apartment complex in the Saltivka district in northern Kharkiv, now stays in his neighbour’s apartment after it was destroyed by a Russian airstrike. Inside his now destroyed apartment lays rubble and burnt ashes. A thin layer of dust rises as we walk across the debris. There is nothing left but a smouldered oven in his kitchen and his bathtub, which is sheltering a house plant. He shows me photos of his daughter and granddaughter with a Christmas tree inside his apartment and points to where they once enjoyed their time here.

He leads me into the adjacent apartment which is a stark contrast to his, surprisingly clean and undamaged. He sleeps here now, but on a pallet covered with cardboard. Out of respect for his neighbour, he says he will not sleep in their bed. 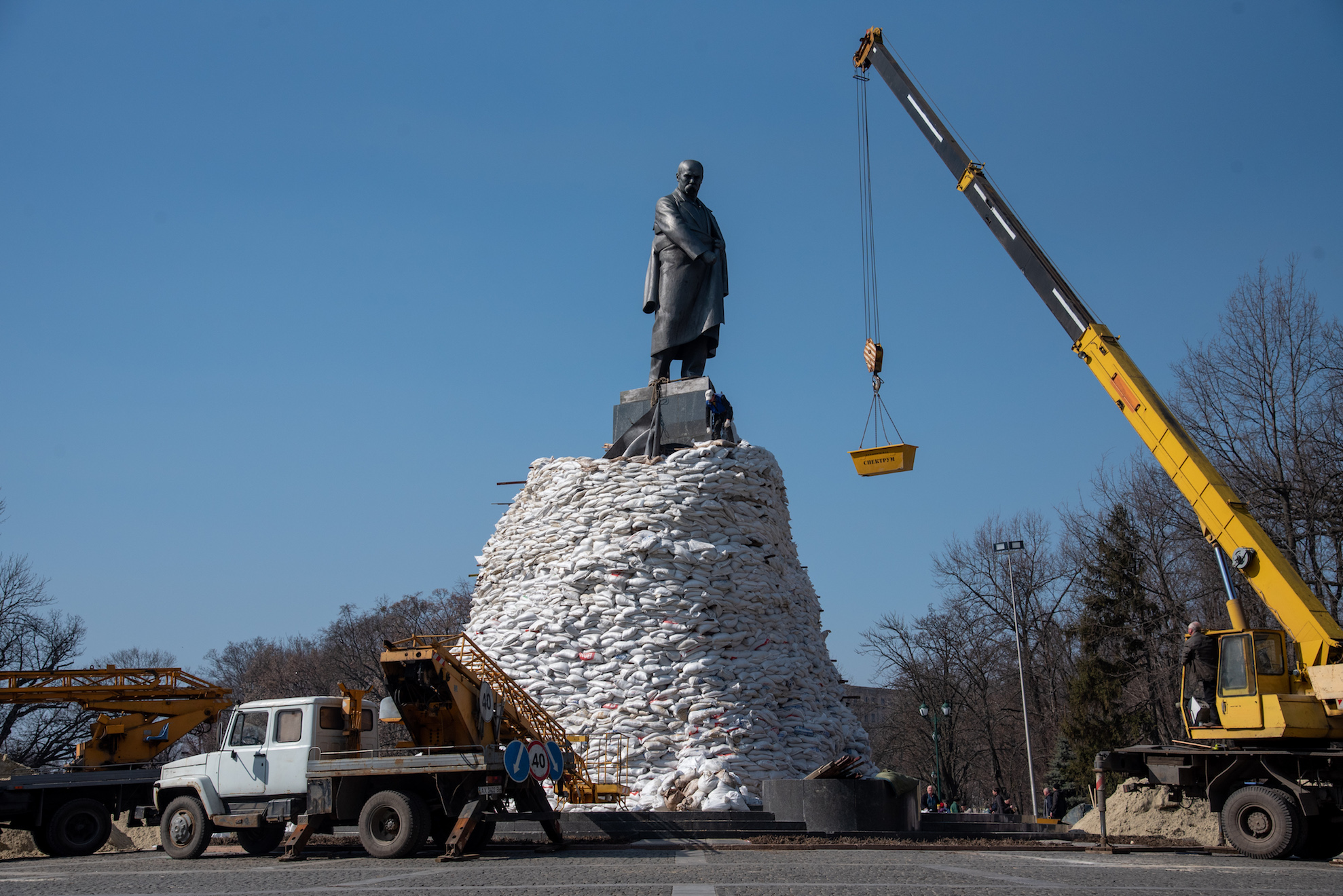 Residents work to protect a statue of Taras Shevchenko. 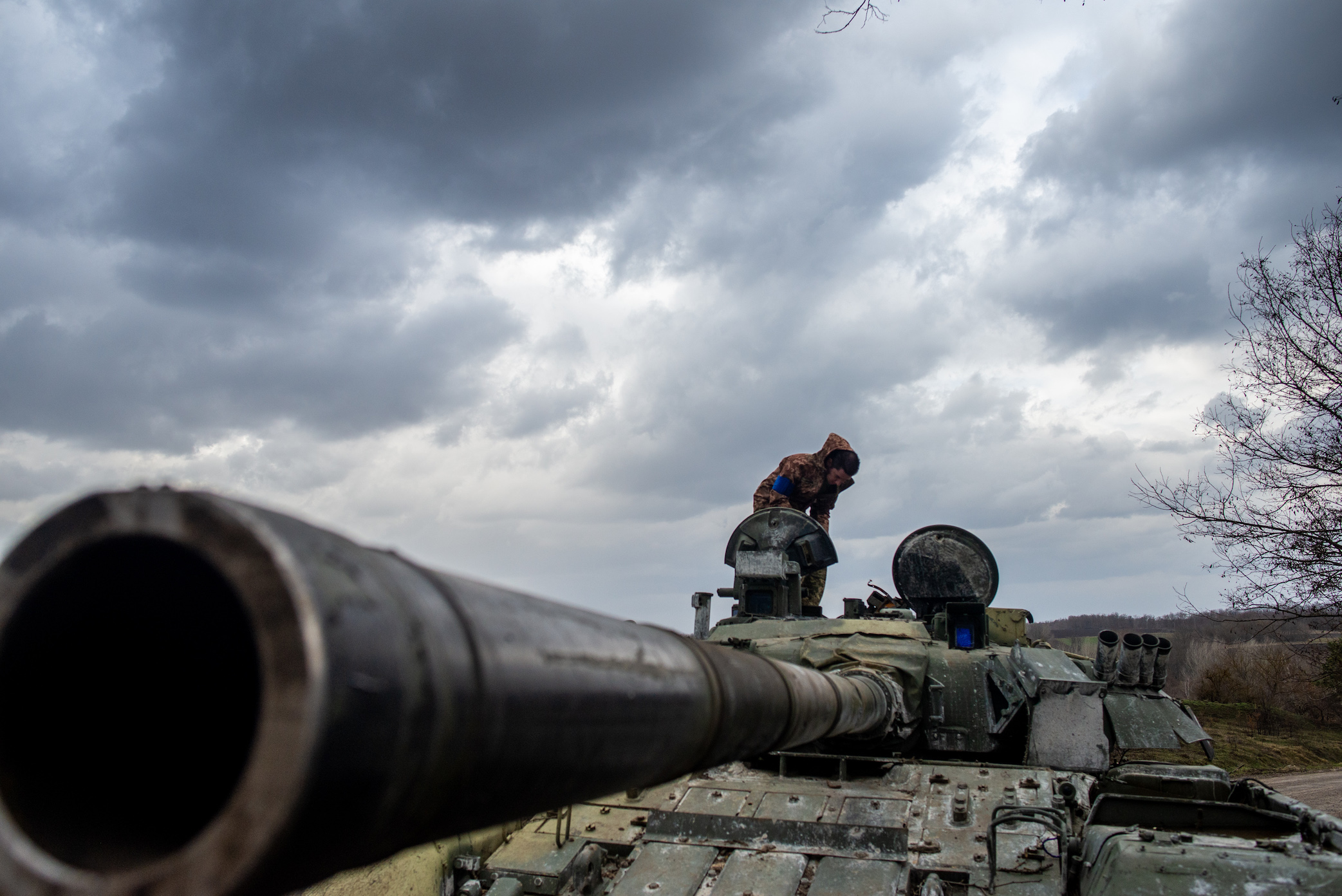 A member of the Ukrainian military examines an abandoned Russian tank in Trostyanets, Ukraine, which the Ukrainian Military just retook from Russian forces.

Throughout the district of Saltivka, many residential buildings have been struck by grad missiles and Howitzer shells. A walk through the spacious courtyards of the complexes exposes the damage done; almost every building has a corner collapsed or residue from a grad strike, all windows are smashed, glass carpeting the ground. Despite this, a few residents still walk around the area, fortifying themselves against occupiers attempting to steal their freedom and their beloved Ukraine.

Back in the city centre of Kharkiv, residents prepare for the Russian invasion. Although Ukrainian forces have been able to push the Russians from the west of the city, where the towns of Trostyanets and Okhtryka have been liberated, the assumption is that the newly prepared attack will come from the east. In the Shevchenko Gardens – the oldest green area in the city centre – workers pile sandbags around a statue of Taras Shevchenko, a Ukrainian poet, and national hero.

Shevchenko is known as the grandfather of Ukrainian literature and was a harsh critic of the Russian Empire and supporter of Ukrainian Independence. He was arrested in 1847 for using the Ukrainian language ( or “little-Russian”) to “slander” the Russian government. Shevchenko was able to return to Ukraine 12 years later in 1859. He wrote the poem ‘Testament’ while ill in 1845, which opens: “When I am dead, bury me / In my beloved Ukraine”.  Today, it resonates with Ukrainians as a proud love song to their country. 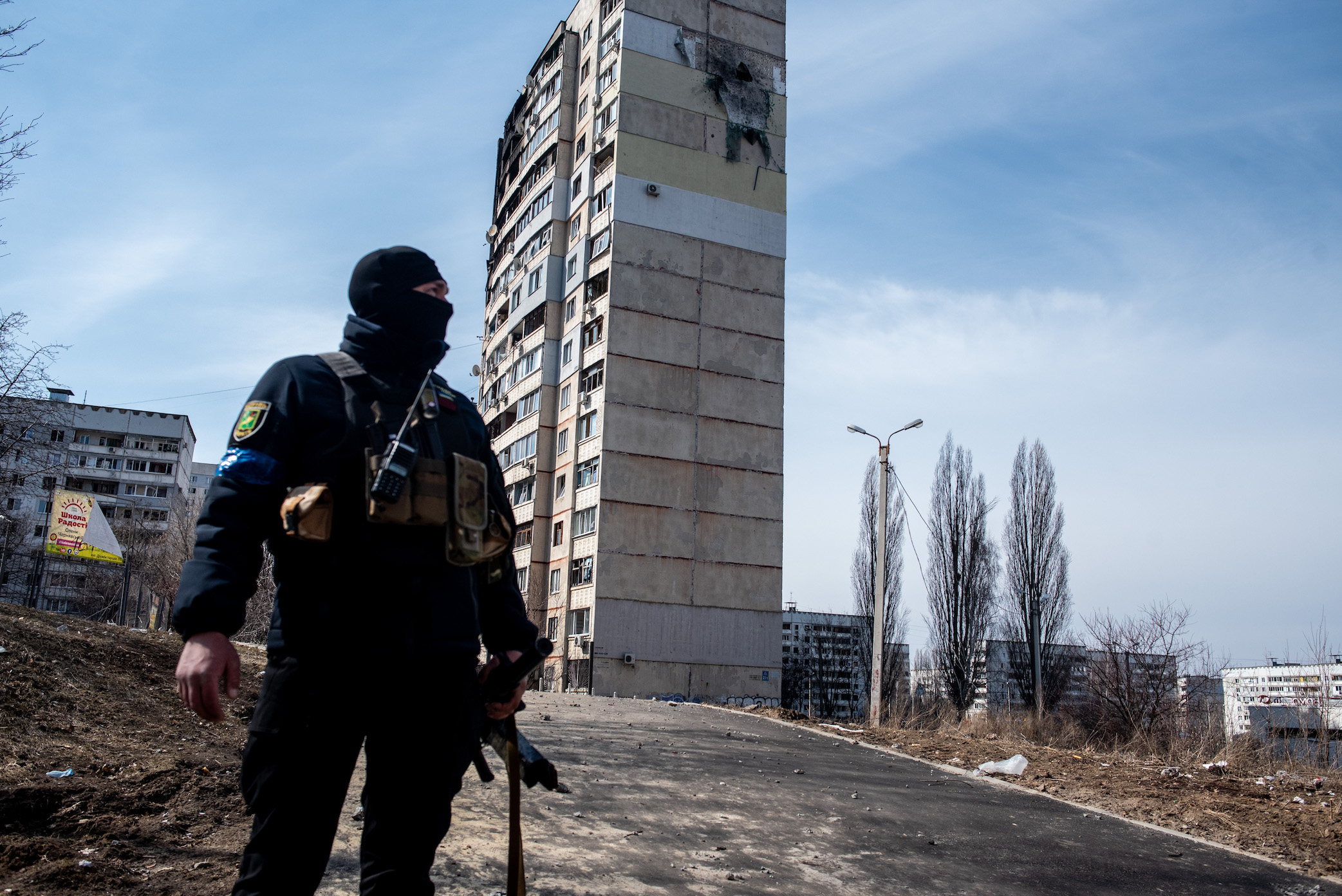 A Ukrainian police officer in front of an apartment in Saltivka district that was hit with a grad missile. 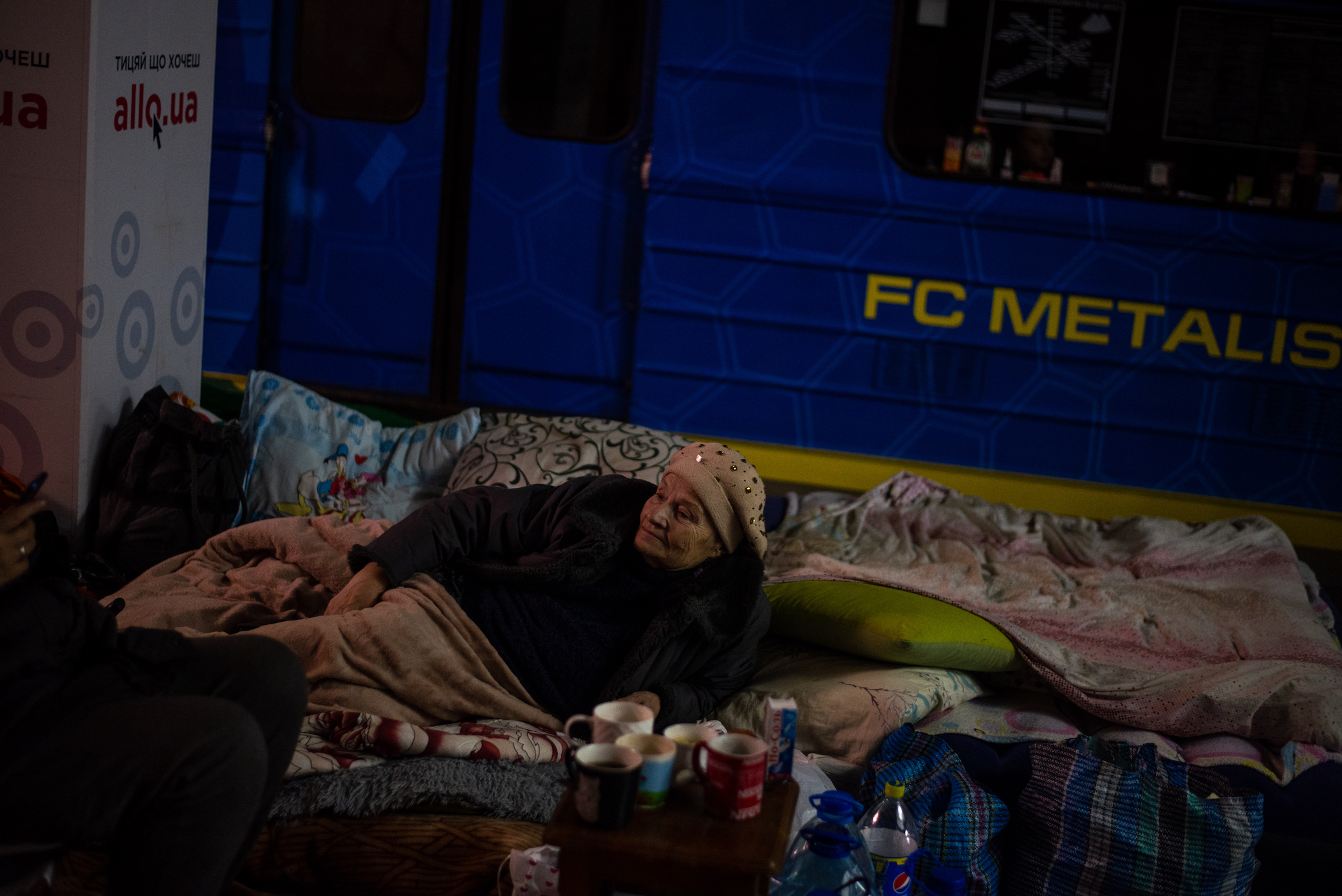 A woman on her makeshift bed inside the metro. 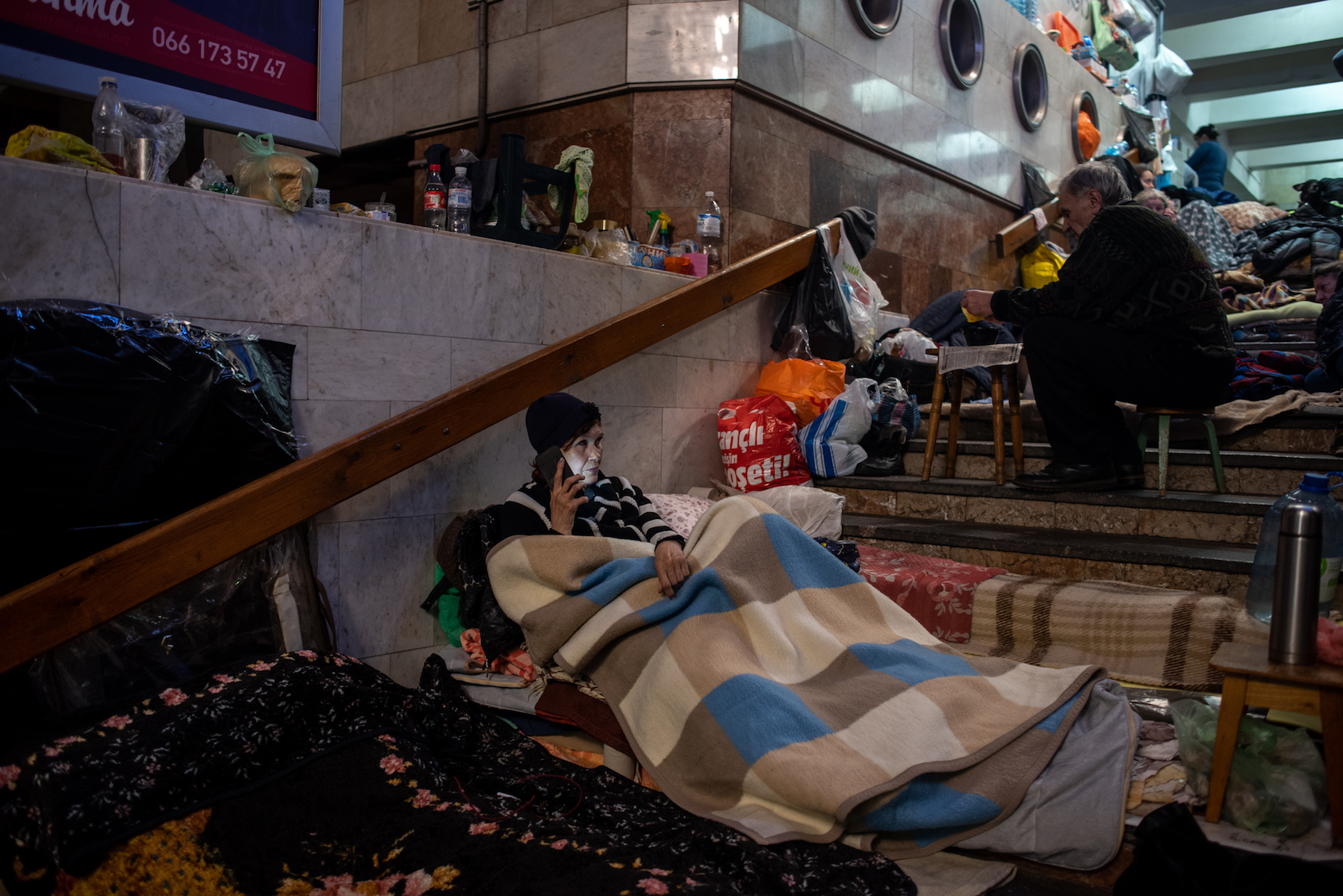 A woman talks on the phone. She sleeps on these steps in the metro. 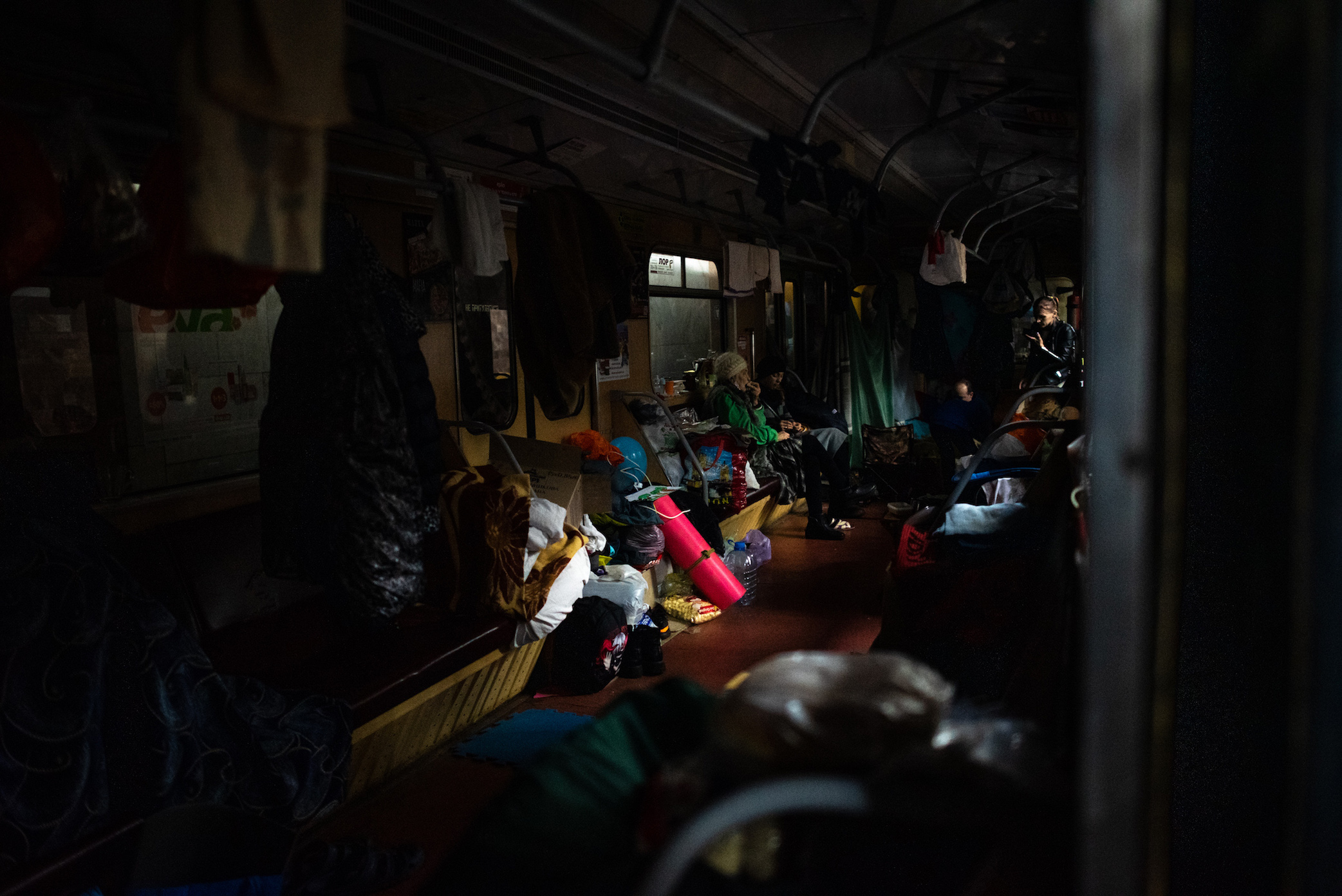 People living inside a parked train car at the Heroiv Pratsi metro. 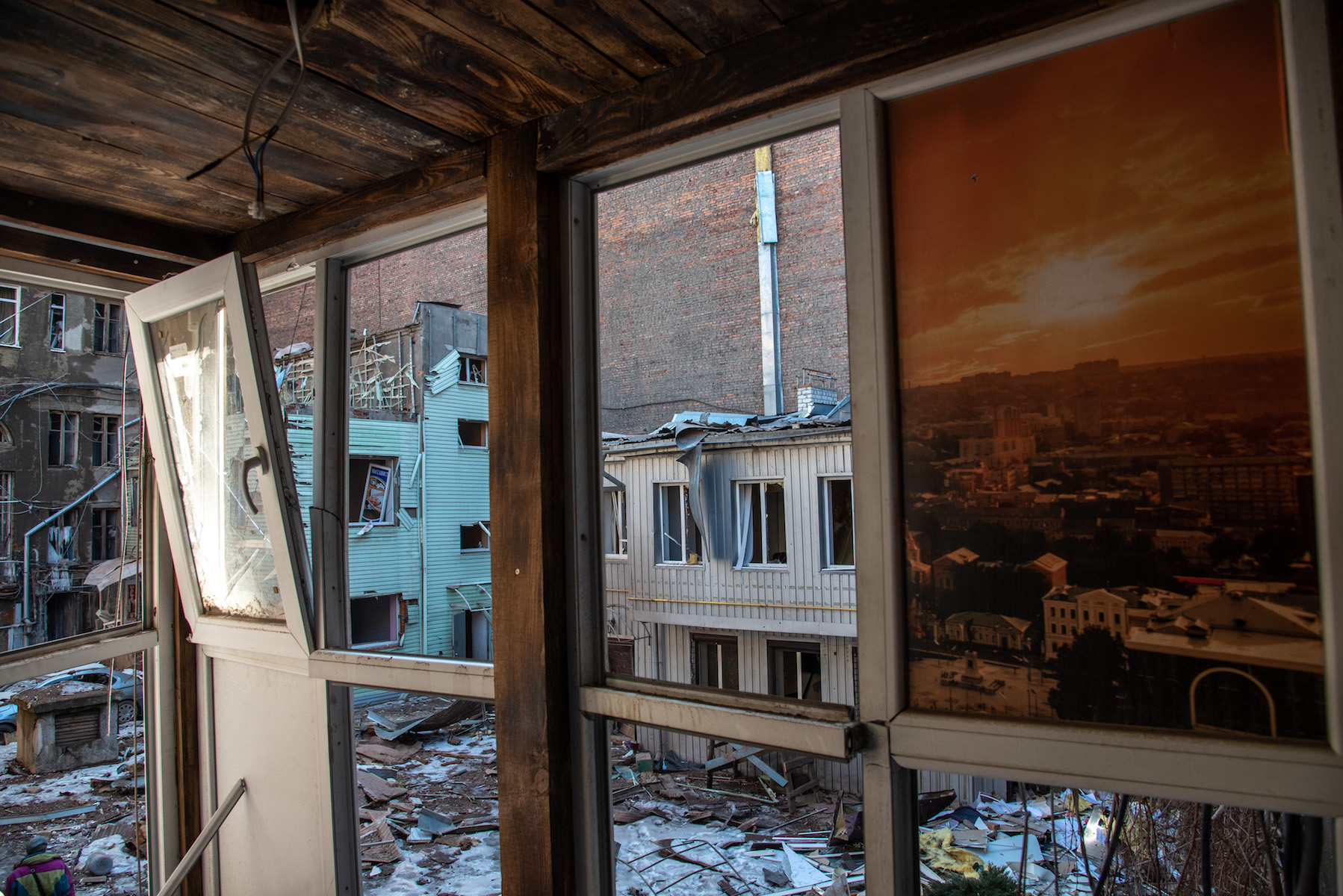 The remains of an apartment which was destroyed by a Russian airstrike in Kharkiv. 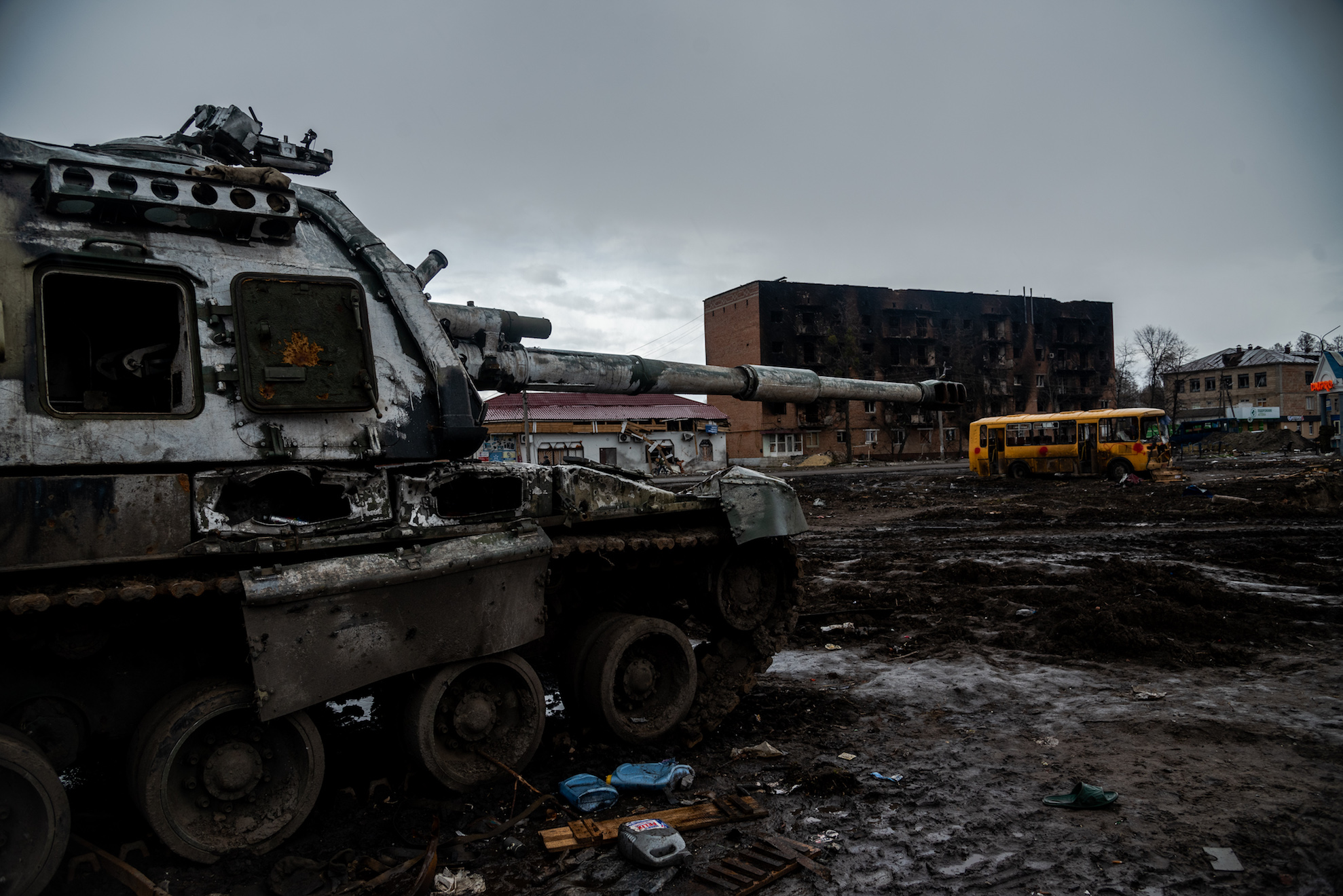 An abandoned Russian Howitzer in Trostyanets, Ukraine, which the Ukrainian Military just retook from Russian forces. 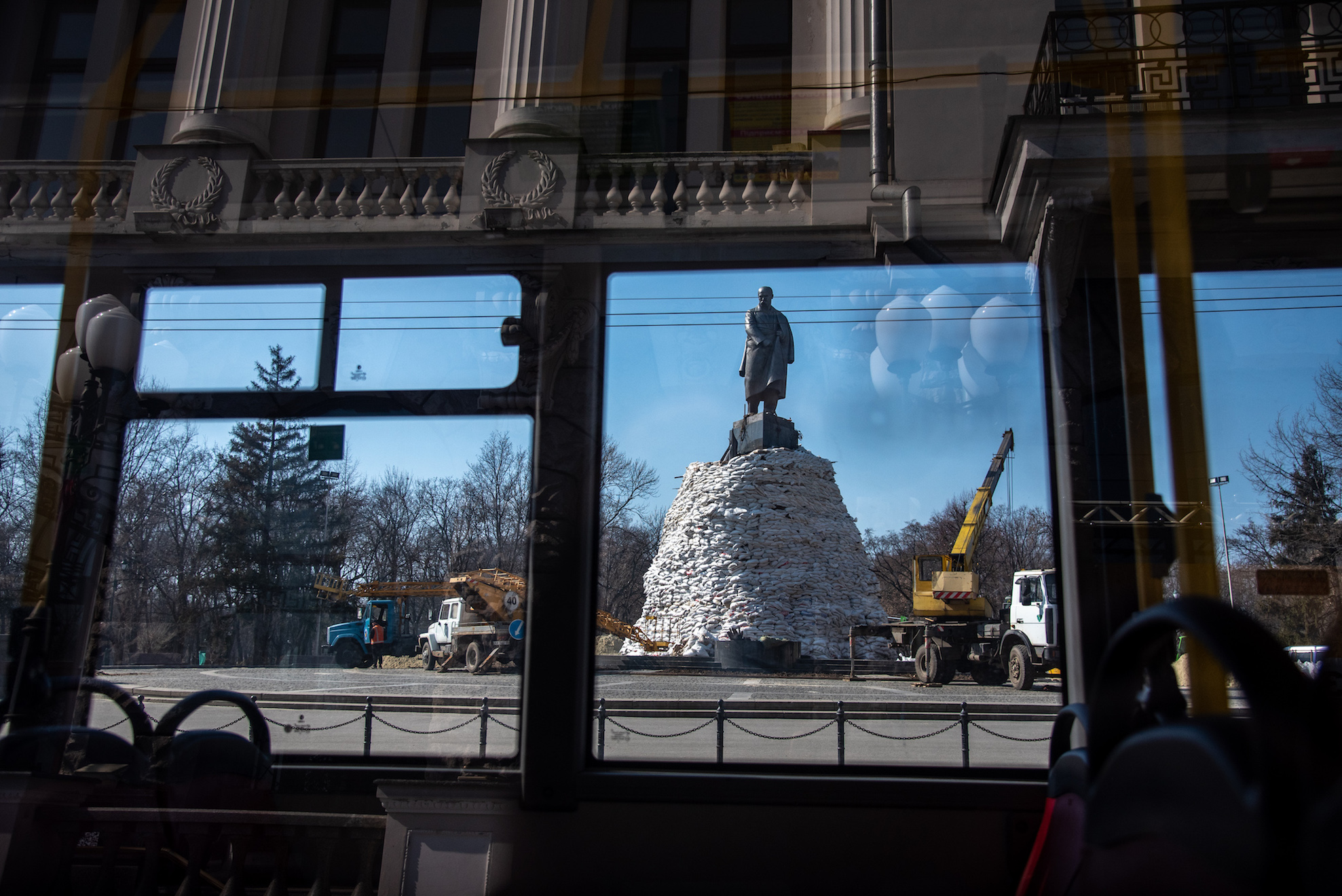 A statue of Taras Shevchenko, a poet and Ukrainian hero, is being protected by sandbags. 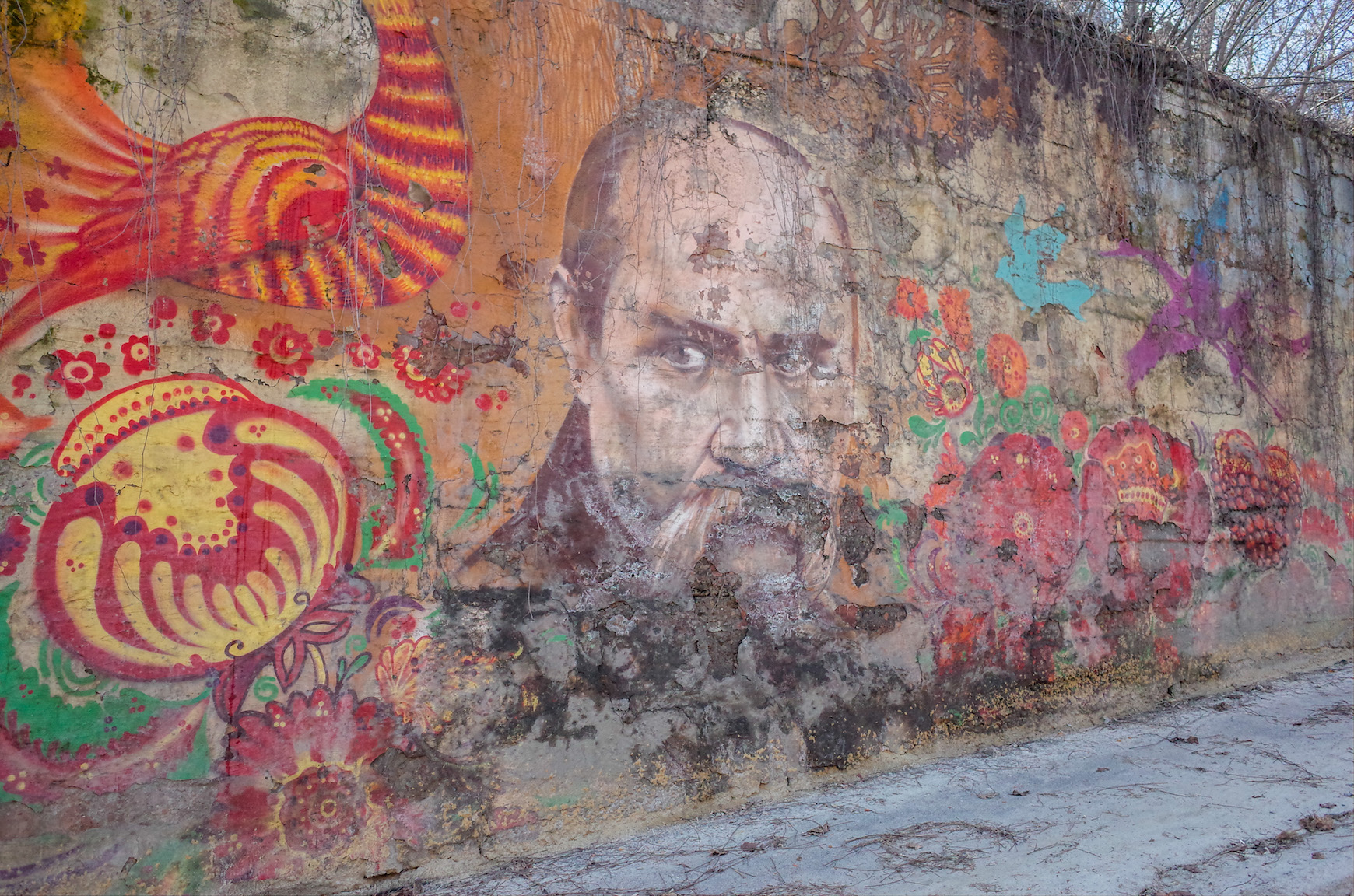 Posted Thursday 7th April, 2022
Text by Seth Berry
Photography © Seth Berry (Pictured: Alexander, 57, inside his neighbour's apartment where he now stays after his was destroyed.)

Linkedin
RELATED ARTICLES
OTHER ARTICLES
Ireland’s national sports are modernising. At the forefront of this movement is Na Gaeil Aeracha, the country’s first ever queer GAA club.
A new exhibition is marking the photographer’s 100th birthday with a look back at his extraordinary career.
Meg Handler’s photos capture diverse groups of New Yorkers coming together for the collective cause of civil rights.
Hackney Bumps is a DIY sanctuary in the heart of East London, home to a thriving diverse community of skateboarders – and beyond.
As the cost of living crisis bites, letting go of treats to keep us going is proving difficult – but we should’t just blame ourselves for our financial worries.
Alternating between colour and black-and-white, the photographer chronicled sexual liberation, economic crises and the repercussions of the war in Vietnam.