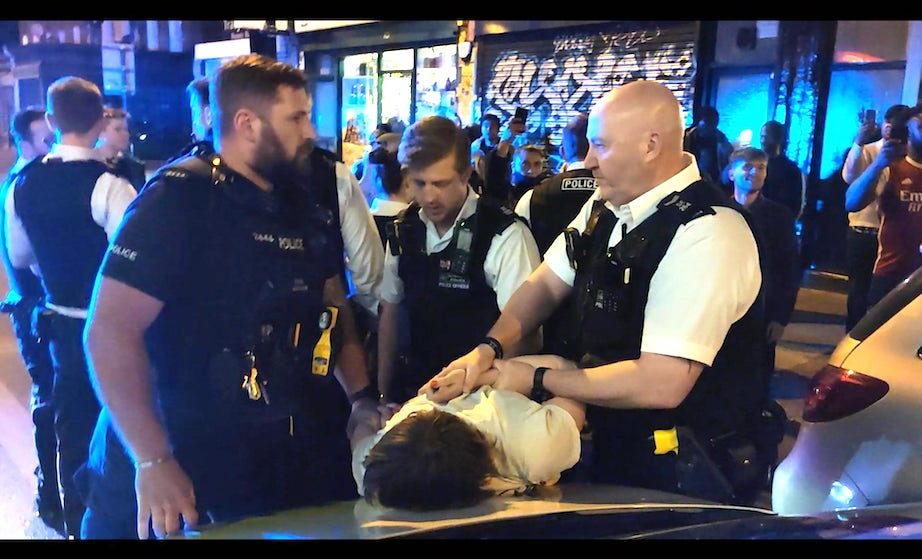 The police response to an attempted intervention in an immigration raid in South East London has been labelled ‘brutality’ by campaigners.

The police response to an attempted intervention in an immigration raid in South East London has been labelled ‘brutality’ by campaigners.

On Wednesday (20 April), at around 7.45 pm, a group of people gathered outside of the Happy Inn takeaway in New Cross, South East London. Inside, an unknown number of immigration officers undertook a raid. Heather David*, 23, was one of those who gathered. “When I initially got to the scene, I asked to see the immigration officer’s paperwork,” she told Huck. “They wouldn’t show me, and locked me out of the premises.”

According to documents seen by Huck, officers entered the Chinese takeaway at 7.25 pm on Wednesday evening to conduct a warrantless search under s28CA of the Immigration Act 1971 in an attempt to identify members of staff who may be working without the right to do so.

One of the people inside was spoken to by officers before being allowed to leave. Another, a young Chinese man of around 19 according to those on the ground, was led out in handcuffs and loaded into an immigration van.

“Once they’d taken the detainee into the van, we surrounded it so that it couldn’t leave,” David said. “We wrote the numbers for [legal support] on a piece of paper and I knocked on the driver’s window to ask if I could give the numbers to the detainee, the officer said no, ‘because he’s under arrest’; I started saying that as someone who’s under arrest he’s entitled to legal advice but the officer just rolled the window up and wouldn’t engage with me further.”

Footage seen by Huck shows a tense standoff between the crowd and a separate officer who asks, “Is there anything reasonable I can do to get you to move out of the road?”. Those seeking to block the movement of the van repeatedly ask the officer what the man has been arrested for and where he would be taken. The officer declined to answer the former question, and on the latter informed those gathered that the young man would be taken to a police station.

It later transpired the young man was being taken to Lunar House immigration centre in Croydon for fingerprinting, with the officer in question assuring the crowd he would be released after. At this point, more police officers moved in, detaining two young women. David was one of them, and can be seen being held against the side of a police car in footage released by Lewisham Anti Raids.

Last night when we tried to resist an immigration raid the cops turned against us, brutally manhandling us. This is NOT okay.

We will not stand for cops or border officers using aggression to intimidate us. We will continue to stand up for our community. @netpol @AntiRaids pic.twitter.com/JVUwR84drI

“I felt like the force that my face was being pushed against the car with was unnecessary,” David told Huck, also sharing images which clearly show fresh marks and bruises along her arm following the incident.

Another young woman was thrown against the bonnet of the car. She can be heard on the footage saying “get your hands off my neck”, “you’re hurting me please” and “my left arm really hurts”. The angle and force with which she was detained, according to someone with knowledge of the incident, “almost dislocated her shoulder”. There are audible screams from those being detained in the footage and outrage from the crowd. During the commotion, the van is seen hurtling away as angry confrontations between the crowd and officers continue.

A spokesperson for police monitoring organisation Netpol told Huck: “The video provides strong evidence of unlawful arrest and unjustifiable, excessive use of force, as well as an attempt to stop someone from legitimately filming police brutality without any powers to do so.”

The spokesperson continued: “There are numerous reasons why monitoring immigration raids is so important – from the need to pass on information about legal rights to migrant communities targeted, to documenting the misinformation and aggressive behaviour of immigration enforcement teams. Police officers treating human rights defenders as criminals should not deter others from joining anti-raids groups.”

The incident, which has been condemned by activist groups as police brutality, comes almost a year to the day after a similar action in Pollokshields in Glasgow secured the release of two men who were detained by immigration officers following a standoff between a crowd of thousands and police officers for many hours.

Commenting on Wednesday’s raid Mary Atkinson, campaigns officer at JCWI told Huck: “Raids like these have divided our communities for too long, but resistance is growing. Thanks to those who resisted this cruel raid, the person targeted has access to legal advice and can fight for their right to stay. Together, we can and must make a stand to resist the Hostile Environment and build a better future for everyone who calls the UK home.”

The young man who was at the centre of the incident was later released Huck understands.

The Metropolitan police were approached for comment and stated they were “aware of the video and are carrying out a review, which will include viewing body-worn video from officers who attended to establish the full circumstances”.

*names have been changed

Linkedin
RELATED ARTICLES
OTHER ARTICLES
A new exhibitions brings together the work of photographers who documented the deep unrest of these pivotal decades.
Photographer Sean Maung reflects on documenting a small town in Pennsylvania afflicted by high levels of unemployment, poverty, violence, crime, and addiction.
A new law change is enabling Britain’s donor-conceived children to know the truth about their origins – but campaigners say the fertility industry must do more to protect people.
A recent High Court ruling against the right to wild camp in Dartmoor National Park sparked the largest land protest in history – and campaigners say their fight is not over yet.
Activists and campaigners are fighting back against new laws that would seriously undermine the ability to take industrial action, calling it an attack on fundamental workers' rights.
Tristan O’Neill’s shots of dancers caught in moments of reverie at the height of rave’s golden age are a testament to the UK’s legendary club culture.