News & Politics / Activism / In the face of gentrification, Bristol residents are resisting 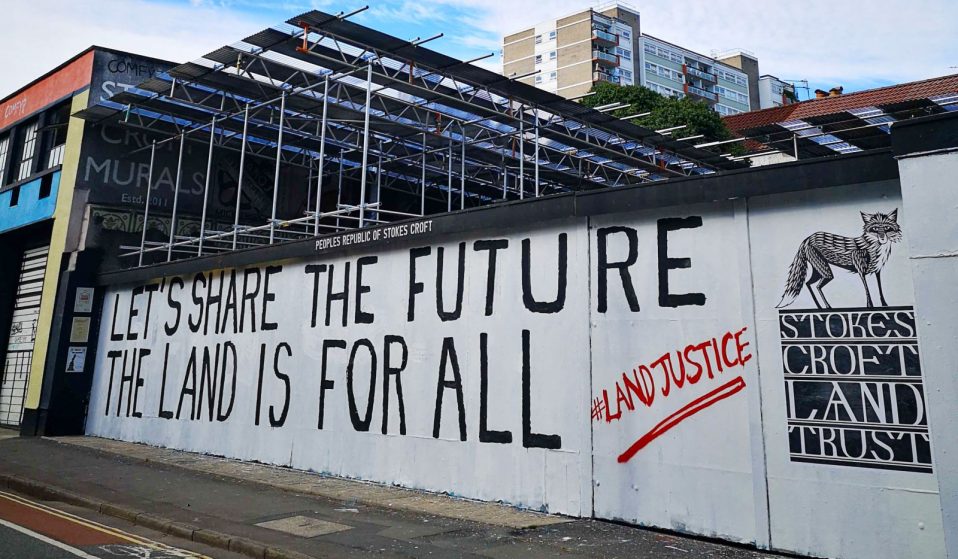 Bristolians are attempting to block developers by bringing a cultural hub in the city centre into community ownership.

Stokes Croft, a cultural hub in the city centre, is under threat from developers. Now, people are fighting back by attempting to bring the area into community ownership.

In the middle of the Stokes Croft area of Bristol lies a tiny triangle of land, long known by locals as ‘Turbo Island’. Sitting at a junction in the middle of the neighbourhood, it operates as a uniquely Bristolian crossroads: an anarchic meeting point for local street drinkers, people experiencing homelessness and ravers spilling out of the area’s many bars and clubs. Legend has it that ancient Roman drinking vessels were excavated here, while others will tell you that ley lines pass underneath, giving the spot its intensely feral energy. Depending on the time of day you pass by, you might witness a bunch of people having an impromptu dance, or a huge stack of pallets being set ablaze. It’s Bristol at its most raw and raucous.

This tiny piece of land, measuring just a few square metres, also happens to be worth about a quarter of a million pounds, according to campaigner Chris Chalkley, who has been engaged in the politics of the area for nearly three decades. This seemingly absurd price tag is down to one fact: the advertising hoarding sitting above Turbo Island.

“The corporates will pay £1000 a week to advertise on that board,” Chalkley says. “That tells you how much corporations are willing to pay to put their shit in front of you.” Turbo island sits just a few metres away from the offices of the People’s Republic of Stokes Croft (PRSC) – a community group Chalkley founded in the mid-2000s which fuses art and grassroots politics to create a dialogue about the use of urban space through its murals and public artworks. 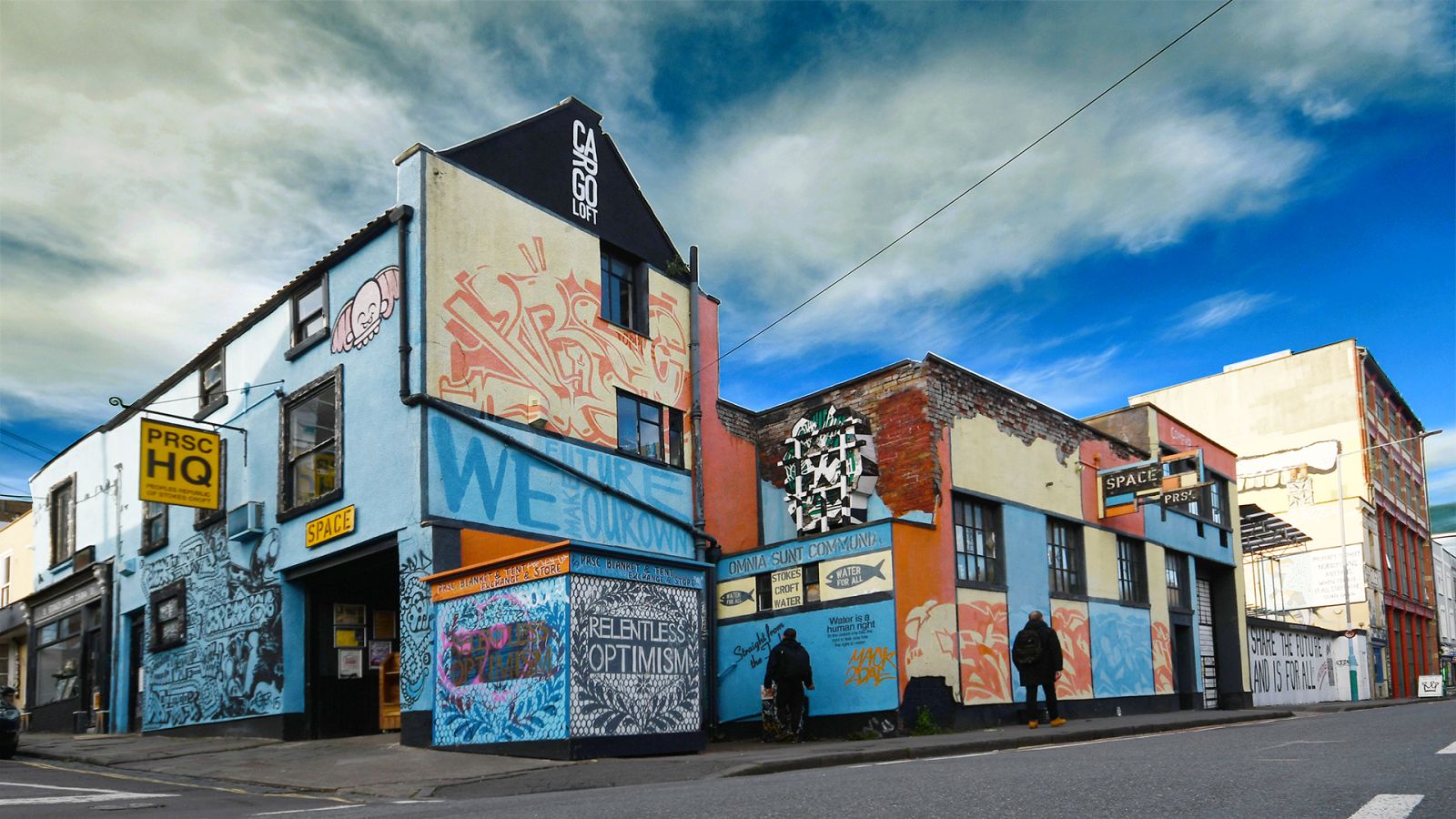 PRSC has been pivotal in the transformation of the neighbourhood, which has long been contested territory. Lying in the buffer zone between the city centre, the affluent neighbourhoods of Cotham and Redland to the north, and the historically working-class and multiracial neighbourhood of St Paul’s to the south and east, large parts of Stokes Croft had been left derelict for much of the 20th century, and it had an accompanying reputation as an area to avoid. In the ‘70s and ‘80s, squatters, artists and musicians took over many of the disused buildings. Skip forward a couple of decades, and the area was being touted as one of the trendiest in the UK.

Stokes Croft now faces the same threat of gentrification as so many equivalent inner-city neighbourhoods. Over the past few years, Bristol has seen astronomical rises in the cost of housing, fuelled in part by its popularity as an alternative to London, and accompanied by rampant development, as companies seek to cash in on the cultural value created by local communities over decades. A 2020 report by Artspace Lifespace – which transforms empty buildings into art spaces around the city – revealed that many of Bristol’s artistic and cultural spaces were under serious threat from rising rents.

Chalkley, a Bristol University economics graduate who was running a china and glass business before founding PRSC, saw many of the changes coming. “It starts with the recognition that neoclassical economics treats land as capital, and that’s a fundamental mistake,” he says. Chalkley has long been a proponent of alternative economic models: “The idea of local community groups having stewardship of the resources which they use and live in makes sense,” he says. “In a way, the whole debate is private property versus the commons”.

Nick Hayes, author of the Book of Trespass – an exploration of land ownership, enclosure and exclusion in England – and an artist who has worked closely with PRSC, has been exploring the idea of the commons for years. “The madness of private property has almost reached its pitch,” he says. “Everything is now an object that can be bought or sold, or can accrue in value and has got nothing to do with the actual use of it. We want to use land, but we don’t necessarily want to own it. But ownership has been the prevailing model of who gets all the rights in law.” His definition of the commons is straightforward: “You get rights to a resource if you put in the work for it. It’s that simple. You show it a bit of love and you get a bit of love back.” 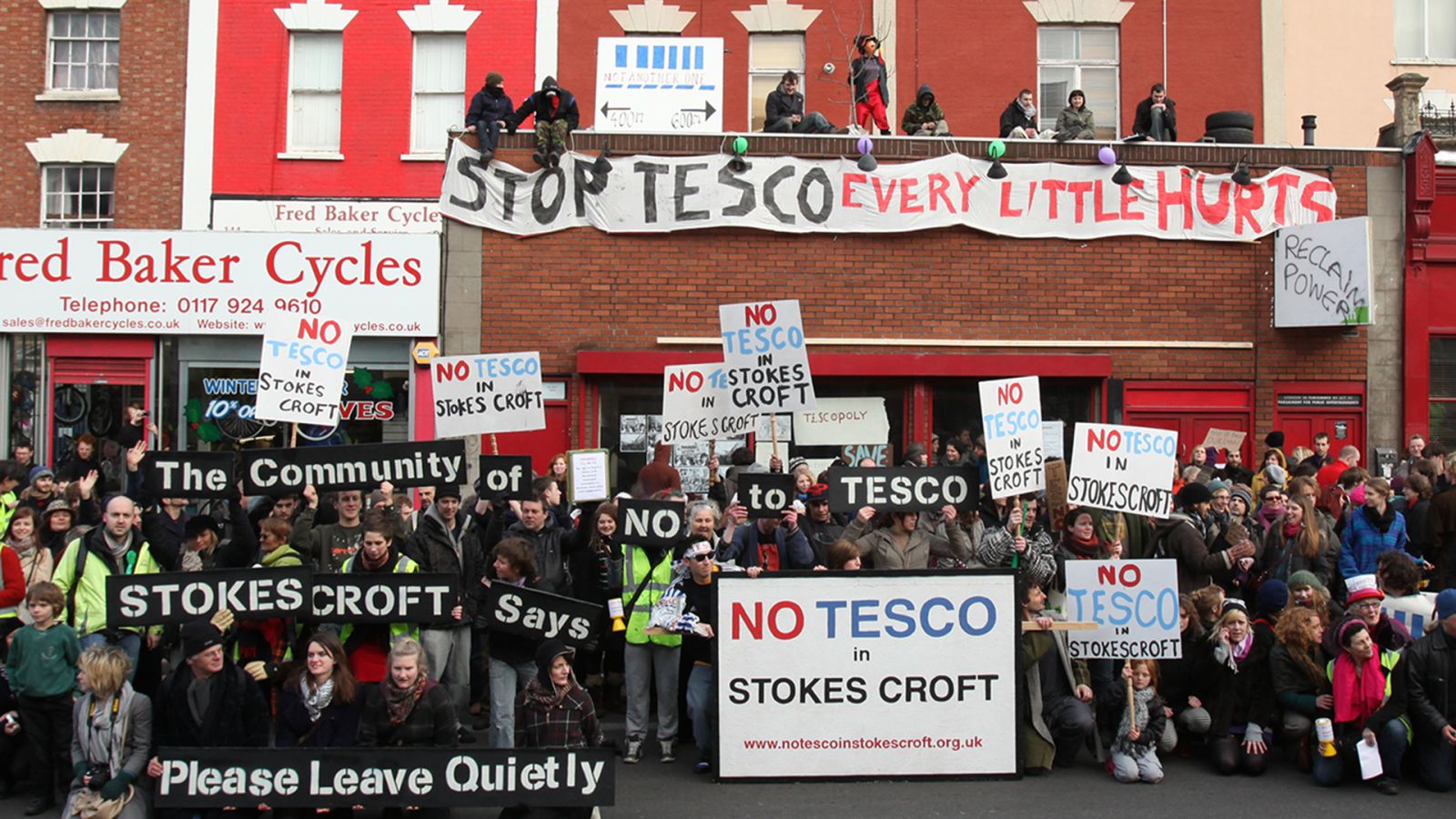 One way to attempt to halt gentrification (and thereby protect the commons) is to bring buildings into community ownership through a community land trust, or CLT. CLTs, according to the Community Land Trust Network, are “democratic non-profit organisations that own and develop land for the benefit of the community”. There are currently 548 land trust groups in England and Wales, taking various forms, from a community bakery in Liverpool to an affordable housing project in South London. It’s a concept that came out of a fervent political period. The first CLT, New Communities Inc., was founded in 1969 by a group of African-American sharecroppers, who wanted to create sustainable housing after being forced from their homes due to registering to vote in Albany, Georgia – a town which was a flashpoint for the civil rights movement.

“We’ve been trying to put something in place as a barrier to rampant gentrification and land speculation for a long time,” says Keith Cowling, a local architect who has spent much of his working life engaged in issues of community housing and land justice. Cowling is one of the directors of the Stokes Croft Land Trust, which is trying to buy the building that currently houses PRSC on Jamaica Street via what’s known as a community share offer.

Hilary Sudbury, who has worked with workers’ co-operatives and other democratic businesses around the West Country for several decades, has been co-opted on to the land trust’s board. She explains: “Community shares is a term that we’ve coined, which refers to withdrawable shares in a society. A ‘society’ is a legal form, similar to a company or a community interest company. Its purpose is social. You’re not buying shares for a financial return, you’re buying shares for the social return.”

The land trust hopes to secure £345,000, with a minimum target of £272,000, using Bristol-based crowdfunding and investment company Fundsurfer. “At the moment, we’ve got 270 people who’ve applied for shares, most of them local to Stokes Croft,” explains Sudbury. Residents of the three postcodes closest to Stokes Croft are able to become members with a minimum shareholding of £10, with each member having an equal vote, ensuring that the land trust is run democratically. At the time of writing, the land trust has raised almost £200,000 and has extended its campaign until 31 May 2022. 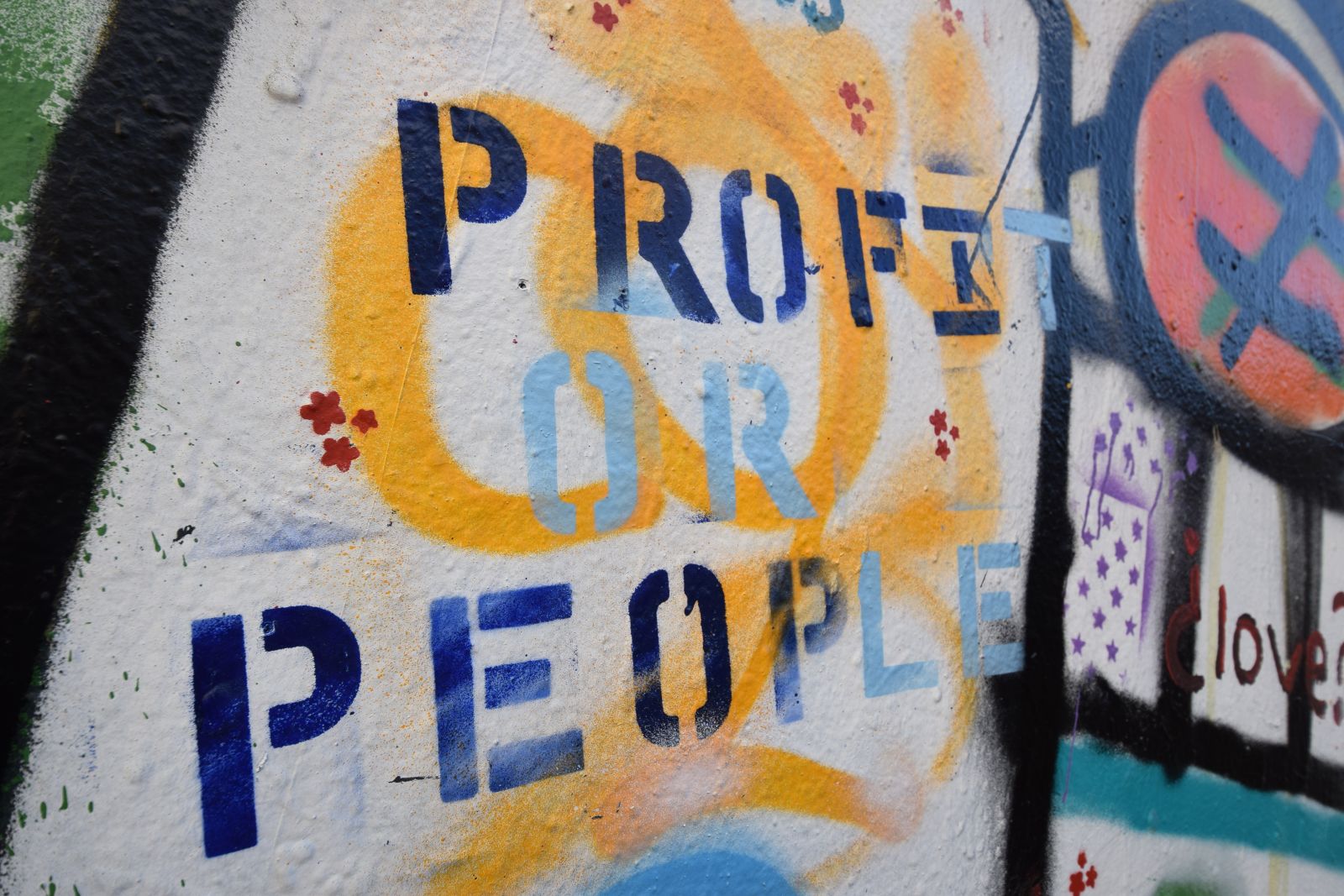 The members of Stokes Croft Land Trust are not the first to propose community ownership in the area. In addition to Stokes Croft’s long history of squatting, several other organisations have experimented with the idea. The Cube Microplex, a volunteer-run cinema and arts venue round the corner from PRSC, was bought through a mixture of donations and an Arts Council Grant in 2013 and is now run by Microplex Holdings, which is also a CLT. Community ownership was also attempted at Hamilton House, the other major community arts space in the area. A disused bank building, it was reclaimed in 2008 and turned into art studios, dance spaces, co-working spaces and a community kitchen by a collective called Coexist. Coexist put forward a proposal for the community to buy the building from landlords Connolly & Callaghan in 2017. In what turned out to be a bitterly fought dispute, the bid was rejected and Coexist eventually lost the management of the building in December 2018.

The fate of Hamilton House (which is now run by a private company), provides an example of the need for alternative ownership models. As Cowling puts it: “It’s a demonstration of what we can all do, in all of our respective communities, to actually keep money local and stop money being extracted by speculation.”

Yet Cowling, Sudbury and Chalkley acknowledge that it’s a hard sell, given the UK’s deep devotion to homeownership and private property. “There is a real issue of people not getting [community land trusts],” says Chalkley. “There has been such a relentless push towards individualism, to self-interest.”

While the architects, thinkers, and artists behind the Stokes Croft Land Trust know that they won’t be able to unravel the market domination of land and housing overnight, they hope that the trust will at least present a model that prioritises community wellbeing and artistic expression over private profit. As Sudbury puts it: “Part of what we’re doing is presenting an alternative. We don’t have a magic wand. We’re not going to solve the problems, but we want to be part of the answer.”

Linkedin
OTHER ARTICLES
A 37-year-old woman shares how her abortion led her to become a clinic worker, and the abuse she’s received in that role.
The idea that a younger generation is abandoning work has become a popular narrative online, but it doesn’t necessarily reflect reality.
By turning a real-life crisis into daytime television fodder, TV bosses have once again shown themselves to be completely out of touch with audiences.
For over a decade, gamblers have won big by employing people to place live bets from the court. But does this dubious method still work?
Financial turmoil is pushing people who work in the sex industry into more dangerous and desperate situations as a means of survival.
Sean Maung’s photos are a love letter to the Black and brown communities that make up New York.