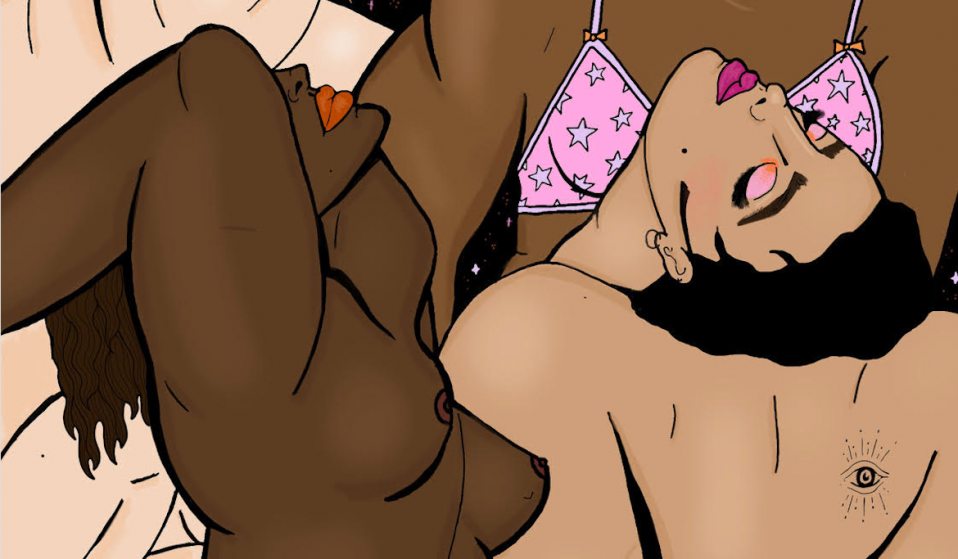 Despite strict laws in Nigeria forbidding homosexuality, queer adult performers are flocking to the adult platform and turning an impressive profit.

Despite strict laws in Nigeria forbidding homosexuality, the country’s queer adult performers are flocking to the popular adult platform, where they’re turning an impressive profit and carving out a space to express their sexuality.

Azi*, a queer 22-year-old student from Nigeria studying Computer Science, is used to receiving compliments about his appearance on social media. “I thought since people love my body, why don’t I make money from it?” he tells Huck. This prompted him to join OnlyFans six months ago, filming explicit content on his phone from his bedroom to earn some extra cash through University and to supplement his day-to-day life.

In Nigeria – where homosexuality is illegal – being a queer adult performer can come with serious consequences. Nigeria’s Same Sex Marriage (Prohibition) Act, signed by President Jonathan Goodluck in January 2014, punishes sex between men with up to 14 years’ imprisonment, and for married individuals, death by stoning occurs in up to 12 Northern states in Nigeria that have adopted Sharia Law.

“Nigeria is very conservative and religious. A site like OnlyFans can be screengrabbed or recorded,” says Edafe Okporo, a Nigerian LGBTQ+ activist and author, who was among the first publicly out queer people in Nigeria. “This spells trouble for the average Nigerian nude going viral.”

Creators like Azi charge subscription fees for exclusive content, put up pay-per-view posts, and generate income from tips and live streams. “I make up to ₦50,000 (£96) per month depending on how much I set my subscription rate and how many people subscribe,” Azi explains. While the app is just a “side hustle” for him, the amount Azi earns is hardly insignificant, considering the average monthly wage in Nigeria is ₦30,000 (£650) a month.

To mitigate the risks of being a queer adult performer, Azi avoids engaging in sexual activities with people of the same sex on camera. “There is really no difference between a straight and queer creator if they are both working alone,” he says.

“Being in the adult industry and creating content is fun, but very risky,” confirms Ezeudo*, a 24-year-old full-time OnlyFans creator, who chooses to show himself engaged in gay sex on the app. While the dangers don’t stop performers from making content, it does make it harder for them to do their job. As Ezeudo explains: “The people I want to work with are aware of the risks, so sometimes it is hard to get them to work with me because they are afraid of getting caught.”

When looking for partners to shoot with, adult performers like Ezeudo have to be extremely careful in weeding out potential homophobes masquerading as queer men – a dangerous phenomenon that is fairly common in the Nigerian queer community, referred to as being ‘‘kitoed’. According to Edafe, “gay men who are afraid to be themselves” blackmailing other gay men is also commonplace.

Given just how conservative Nigeria is, all adult performers, regardless of sexuality, are subject to stigma. Still, this hasn’t prevented the rise of the country’s adult industry. In an interview with Pulse NG, a Nigerian adult performer claimed that people in the industry could earn between $3,000 to $10,000 monthly (£2,219.72 to £7,3375). While there are no official records as to how much the adult industry in Nigeria generates yearly, it is estimated to be millions of dollars.

This is where OnlyFans is providing a much-needed cash injection for some people living in Nigeria. The country, which has been called the ‘poverty capital of the world,’ has an unemployment rate of 27.1 per cent, and the situation is even worse for LGBTQ+ citizens. Because LGBTQ+ people are not recognised in Nigeria, it is difficult to ascertain how much they earn exactly, however, qualitative data has shown that LGBTQ+ Nigerians find it difficult to secure meaningful employment in the private and government sectors. “There are a growing number of self-identified queer people in the fashion and entertainment industry, but aside from this, securing employment as a queer Nigerian is non-existent,” says Edafe.

Still, there are hurdles adult performers face when it comes to making money from OnlyFans, on top of the significant 20 per cent cut of performer’s earnings the app takes. “One huge problem about OnlyFans is the fact that we in Nigeria can’t earn unless we have the Cash App [a mobile payment service] or an international bank account,” Azi says. “That was a huge problem for me when I started out here. I had to get a friend abroad to create a Cash App for me before I was able to earn.”

Ezeudo faced the same problem when he was starting out on the app: “I was going to cry because there wasn’t an option for me to add a Nigerian bank account,” he recalls. “I had to text someone in the UK to help me out, and it wasn’t free. I had to pay a lot.” Some Twitter users have speculated that Nigerian payment companies don’t want to be seen to support pornography in a country where it is still so intensely stigmatised.

“There’s no law against creating adult content, but it is widely considered a moral offence,” explains Princess*, an LGBTQ+ adult performer on OnlyFans with over 50 monthly subscribers. Princess says she was arrested last September when someone called the police on her and the group she was working with on a shoot. “We were charged to court and had to pay a bail of millions of naira [Nigeran currency]. There’s no remedy to this, but the job must go on,” she says.

According to Edafe, people who use OnlyFans and similar websites will often tip off the police. This hasn’t prevented performers from working, but it has forced them even further underground. “In every hiding place you find yourself, the clock is just ticking, patiently waiting to explode,” Edafe says. “That’s why many queer Nigerians flee to safer countries to express themselves, because is almost impossible to be yourself in Nigeria.”

Conditions for queer people show little signs of improvement in Nigeria: in this past year, police officers have used the pandemic as an excuse to harass the LGBTQ+ community and horrific incidences of death and violence against queer people have occurred. But the country’s queer community is continuing to fight back, as shown by their role on the frontlines of the recent SARS protests. OnlyFans is just another way Nigerian LGBTQ+ people are resisting and finding ways to survive in a system designed to crush them.

*Names have been changed to protect identities.

Linkedin
RELATED ARTICLES
OTHER ARTICLES
A recent High Court ruling against the right to wild camp in Dartmoor National Park sparked the largest land protest in history – and campaigners say their fight is not over yet.
Social prescribing connects people with non-medical support to improve their health and wellbeing – but some experts worry it’s just a stick plaster solution.
At his West Bank restaurant, Fadi Kattan established himself as the voice of modern Palestinian cuisine. Now, he’s bringing his innovative, bold flavours to the UK’s capital.
A new law change is enabling Britain’s donor-conceived children to know the truth about their origins – but campaigners say the fertility industry must do more to protect people.
Since 2007, Gideon Mendel has made 20 trips to document floods in 13 countries. The result is an alarming record of what has already been lost to the climate emergency.
AI companies that develop image-generators using copyrighted artwork from the internet are coming under fire from artists who say that it amounts to theft.