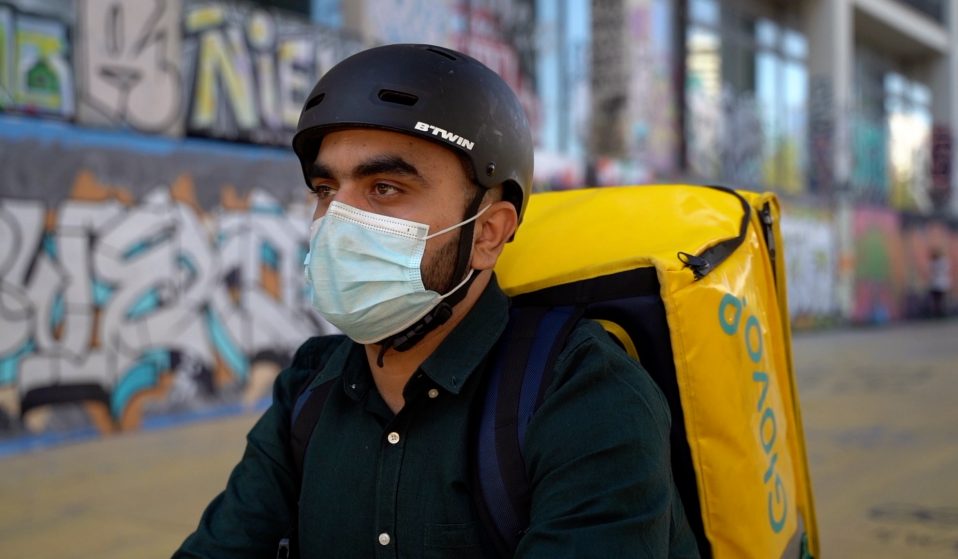 Text By Maria Alemany Ortiz and Will Hecker

Companies are determined to avoid implementing a law intended to improve the working conditions of gig workers.

A law brought in to improve the working conditions of gig workers in Spain has backfired, as companies go to great lengths to avoid implementing it.

Ana Rodríguez* has been working for Glovo, Spain’s leading food delivery app, for eight months. She arrived in Barcelona in December 2020 from Venezuela, where she worked for more than 40 years as a university administrator. Despite having had economic stability her whole life, the country’s severe inflation meant her salary was significantly reduced. After arriving in Barcelona, she looked for a job as an administrator, but after months of trying without success, in May 2021, she started working at Glovo, a food delivery site, feeling she had “no other option”.

On 12 August 2021, Spain became the first European country to significantly regulate the gig economy. The Supreme Court, ruling in favour of a former gig economy rider, declared that riders were not self-employed workers, as they had been categorised, but rather employees. As well as requiring the delivery companies to directly hire all their riders, the law forced them to be transparent about how the app’s algorithms affected working conditions and hiring and firing decisions.

However, a half year after the rider’s law came into force, Rodríguez continues to work as self-employed. In fact, most delivery companies in Spain, instead of implementing the law, have worked hard to subvert it, ignore it or, in the case of Deliveroo, leave Spain entirely. “The only change for me since the rider’s law came into force is that I get paid less and I have to work more hours to make ends meet,” says Rodríguez. When joining, the €32 (£26.60) delivery bag must be bought from Glovo, and riders are responsible for the purchase and maintenance of their own bikes. Once signed up, a Glovo rider who works as a freelancer has to work more than 10 hours a day to reach the Spanish monthly minimum wage. Rodríguez, who is in her 60s, says she cannot spend more than eight hours a day delivering orders. With this, she earns between €800 (£668.05) and €1,000 (£835.04) per month, from which she has to deduct the freelancer fee, VAT and income tax. In the end, her salary is between €500 (£417.56) and €700 (£584.58) per month.

This has put the riders in direct confrontation with their employers. Following the introduction of the law, Glovo announced that it would hire 2,000 riders from its own supermarkets, but initially through temporary-employment agencies. In response, supermarket workers across Barcelona went on strike: no orders came out of the supermarkets and after Comisiones Obreras, one of the largest unions in the country, filed complaints with the Labour Inspectorate, Glovo was forced to hire the supermarket workers directly with an indefinite contract.

However, to this date, they have still not yet directly hired any of the over 8,000 street riders, such as Rodríguez, who make up the bulk of the company. In order to claim that these riders are self-employed and therefore stay within the law, the Catalan startup made several changes to its algorithm. Glovo told Huck that they “launched a new independent contractor collaboration model” which, they say, “provides the flexibility, autonomy and independence that most of our fleet values”. The reality, though, is that the changes to the algorithm undermine the freedom for riders to work when they choose and for the rate they want.

The first change in its model, and the most controversial, was the activation of the “multiplier” – a rate set by the rider themselves that multiplies the base rate (i.e. the money received per order) by the amount they choose. The company reduced the base rate from €2.80 (£2.33) to €1.30 (£1.08) and allowed its riders to set the multiplier between €0.70 (£0.58) and €1.30. In practice, this meant workers were forced to underbid each other for orders.

“If you increase the multiplier on a normal day, you will not receive orders,” explains Alberto Sierra*, another Venezuelan rider who has been working for Glovo for more than a year and a half.  From one day to the next, salaries were reduced by more than half.  The innovation was so controversial that riders took to the streets and after several days of demonstrations, Glovo changed the multiplier to be set between €1.00 (£0.83) and €1.30. But still “many people come to the union with debts because they can’t pay the self-employment fee because Glovo has lowered the price they pay per order,” explains Carmen Juares. “Some people have to choose between paying the self-employment fee or buying food and paying rent.”

As riders are paid per order, rather than per hour, long hours are required to make a decent wage, much of which is unpaid waiting in the streets. Participating restaurants and take-aways are often reluctant to allow riders to use their facilities, meaning finding a place for a toilet break is difficult. “According to the company, riders can decide their time slot and connect whenever they want,” explains Carmen Juares, head of New Realities of Labor and Social Economy of Comisiones Obreras. “But there are workers who would like to work from Monday to Friday but can only work on the platform on a Saturday or Sunday.”

Other companies operating in Spain have pursued different strategies following the rider’s law. Deliveroo dramatically announced it would leave the country and soon after stopped operating in Spain. Meanwhile, on the day the rider’s law came into effect, UberEats fired 3,000 self-employed workers so they didn’t have to hire them. Since then, the company has hired riders through third-party companies: “All the riders who use the UberEats platform are employees of the delivery companies with which we collaborate,” a spokesperson for Uber told Huck. But unions have denounced this practice as illegal and filed a lawsuit for the dismissals. “What these companies should have done is hire workers directly,” explains Juares.

One company that decided to move from hiring through temporary employment agencies to direct hiring has been Just Eat, demonstrating that it is economically viable to hire all employees, paying them at least the minimum wage and offering them protections such as sick pay and holiday.

Still, some organisations have complained that the law does not go far enough. “The law applies a little more pressure, but the solution is to put more resources into labour inspection and apply the highest sanctions that can be applied, because if it’s cheaper to break the law than comply with it, these companies will continue to do so,” explains Núria Soto, from RidersXDerechos, a riders’ platform set up to fight the practice of false self-employment. “Justice is very slow, and when these companies receive a fine, they have already defrauded millions out of social security.”

Another problem that complicates the application of the law is the position of undocumented migrant workers, who have fuelled the growth of the companies, but now may be left without work. In Spain, there are approximately 18,000 active accounts, though many more riders. In Catalonia alone, the Comisiones Obreras union estimates that for each account there are five riders. As undocumented migrants are unable to create accounts themselves, it is common for them to ‘rent’ accounts from those with the right to work, sometimes through dubious businesses that facilitate these rentals. The account rental fee can be up to 40 per cent to 50 per cent of their earnings, putting their salary significantly below minimum wage.

While the platforms are not actively involved in this exploitation, they are aware of what happens and, despite arbitrary crackdowns, often choose to ignore it. “What will happen to all the people without papers if the law is applied?” asks Soto. “Will these people who have been generating a benefit for the company be taken into account? It seems that it is not in anyone’s plans.”

The Workers’ Commissions, RidersXDerechos, and riders who don’t want to be named out of fear of reprisals, say that the company has taken advantage of the fear of some migrant riders, encouraging rumours they will not be hired when the new law is implemented. (Glovo denies these claims to Huck). “Glovo tells its workers that hiring is unfeasible and that they will be out of a job if they cannot hire them as self-employed,” says Juares.

Half a year after the rider’s law came into force in Spain, the future for riders is uncertain. In their attempts to circumnavigate the law, delivery companies have deployed a variety of nefarious tactics: firing workers, subcontracting jobs, spreading rumours of job losses, and reprogramming their algorithms to reduce rates and make workers bid against each other for orders. As the rest of Europe contemplates similar laws to regulate the gig economy, it is vital that policy makers learn from the mistakes made in Spain.

Linkedin
RELATED ARTICLES
OTHER ARTICLES
Photographer David Hoffman recalls documenting the extreme wealth inequality around Tower Hamlets and Hackney int the 1980s.
Over a dozen Stop Deportation activists locked themselves to each other outside a detention centre to prevent coaches taking those due to be on the Rwanda deportation flight from leaving.
The past five years have seen a staggering increase in foodbank usage across the UK. Now, staff fear things are set to get much worse.
The curators of a new exhibition are hoping to shed light on Plymouth’s vibrant but often overlooked nightlife.
Writers Gracie Mae Bradley and Luke de Noronha take on the callousness of borders, arguing for a world beyond them.
The singer-songwriter discusses her intimate new project – and the advice she’s picked up across a career as one of rock’s leading voices.