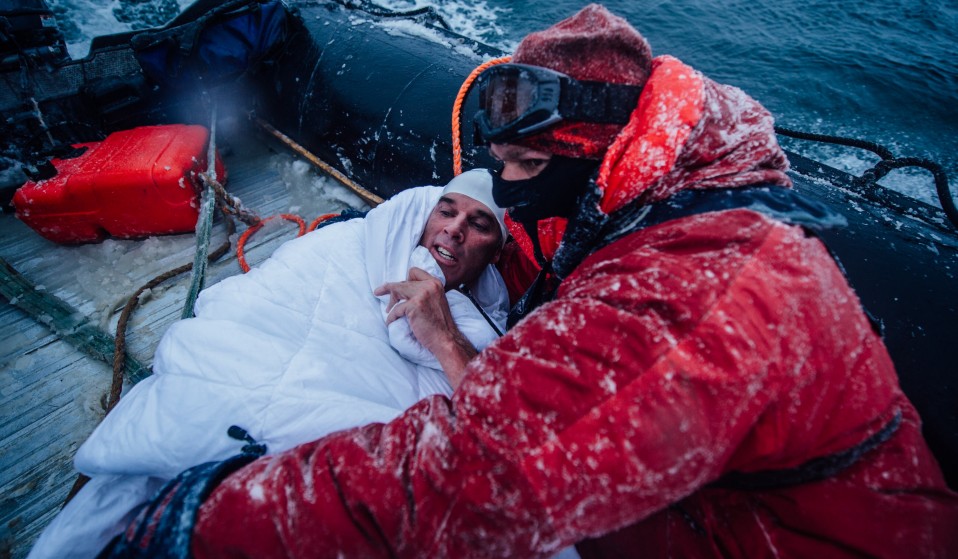 Whether he's walking the corridors of power or swimming in the most extreme environments known to man, campaigner Lewis Pugh is determined to save our oceans.

Whether he's walking the corridors of power or swimming in the most extreme environments known to man, campaigner Lewis Pugh is determined to save our oceans, one bit at a time.

In October 2016, 24 countries alongside the European Union agreed to make the Ross Sea a Marine Protected Area (MPA). Measuring some 1.1 million sq km in size, this area of the Southern Ocean around Antarctica is one of the best and most diverse natural marine environments on Earth, the importance of which should not be lost on anyone who truly cares about this planet’s future.

This wasn’t an easy victory, campaigners and activists have long been fighting to protect our oceans, and nobody knows this more so than UN Patron of the Oceans Lewis Pugh.

Pugh has long-campaigned for the protection of marine areas, taking to the waters to swim in extreme environments in the hope of highlighting humanity’s disastrous impact. In 2007 he swam in the North Pole to draw attention to the melting ice and glaciers; the impact of water shortages on regional peace was his campaign focus in 2010 as he swam across a glacial lake on Mount Everest. 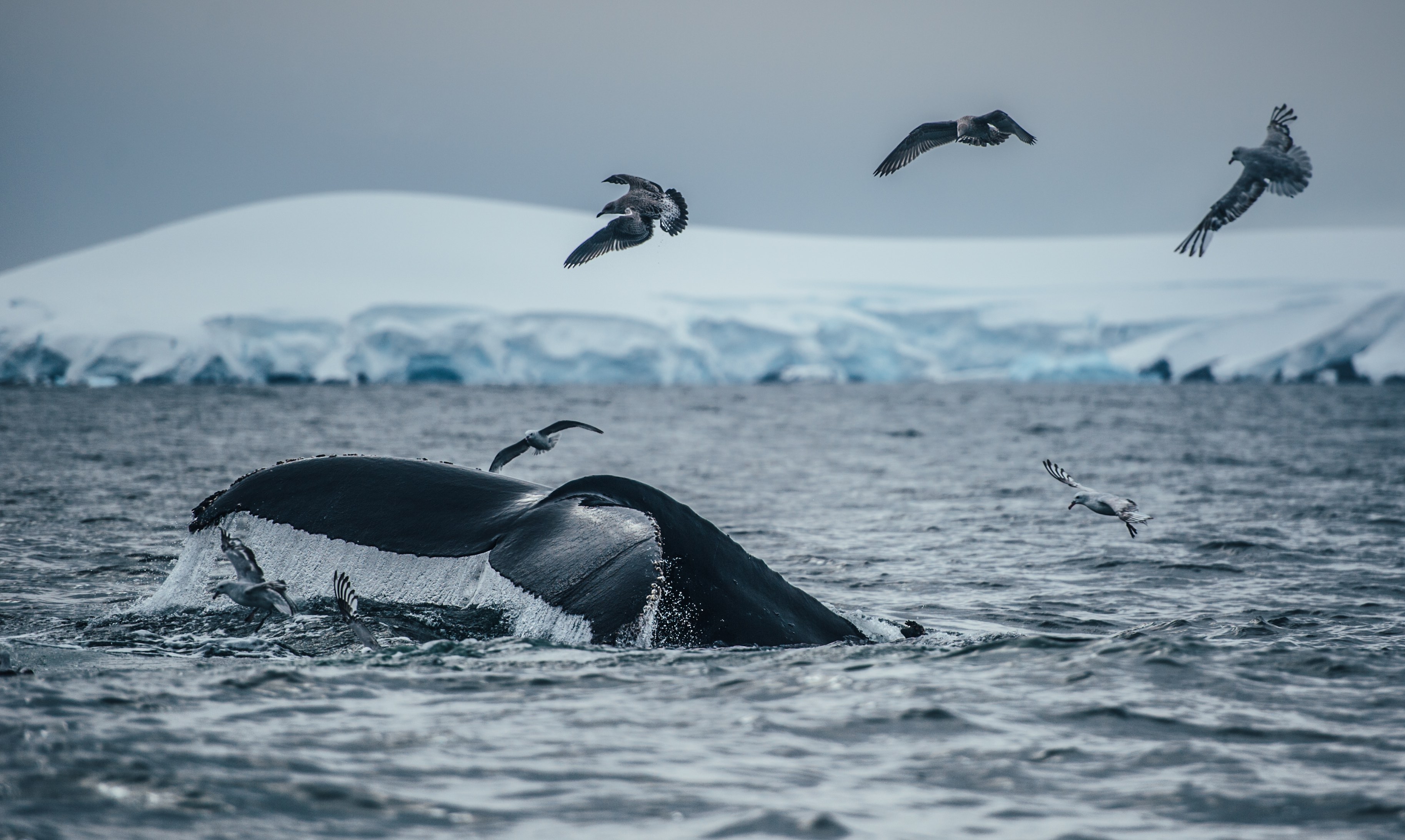 Pugh’s exploits as a swimmer have earned him with a place on the global speaker circuit and crucial access to world leaders, but the campaign to protect the Ross Sea has been funded out of his own pocket. He’s spent two solid years on countless missions trying persuade those in power to see the facts as he sees them, and the facts are the things that really count when time is running out. Emotive images of animals on the brink can only go so far.

“Had I not been a maritime lawyer I wouldn’t have been able to do this,” explains Pugh. “You need to be able to argue with real passion, but calmly. Not shrill. What are the points that you can make succinctly to a head of state or environment minister, which is going to change his or her view of the situation? They’re not scientists, and neither am I, but they need to understand why it’s important. Law is really good at advocacy.” 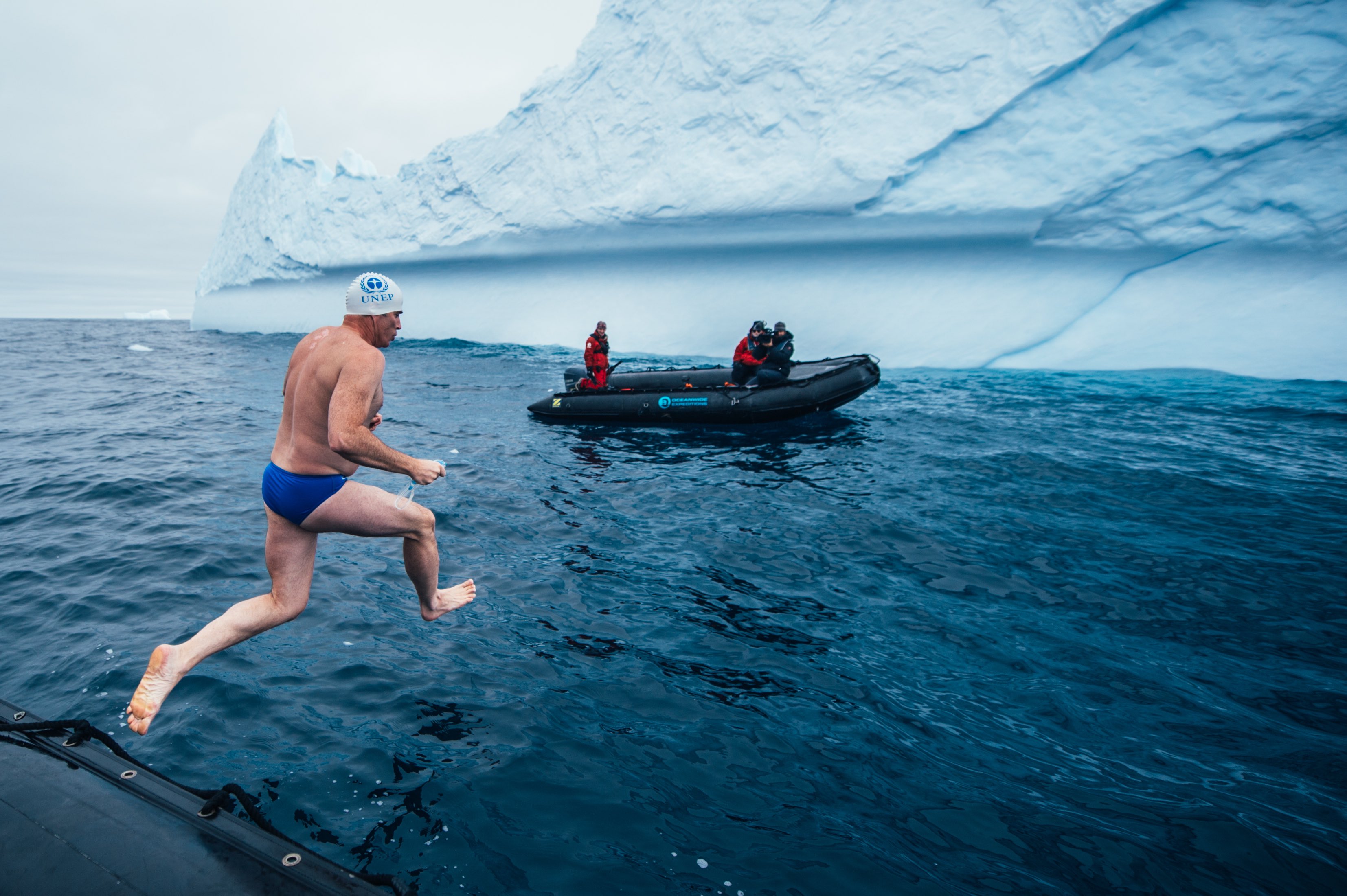 For the foundation that Pugh has set up, the Ross Sea is just the beginning: the organisation is committed to ring-fencing off other areas of Antarctica with the aim of creating an area the size of Australia – roughly 7 million sq km square kilometres – free from human intervention by 2020.

The challenge this represents is not lost on him; humanity and its quirks make it hard to get anything significant done in a reasonable amount of time.

“It’s not like the Serengeti or Yellowstone which are protected for as long as Earth is here,” Pugh continues, “the Ross Sea is not. I can assure you that if there is any discussion about re-opening the Ross Sea up for fishing in 35 years time, I’ll be back there swimming.”

Many of us fear open water, for obvious reasons, and not only because of the animals that live there. Deep water has an unknown, dark mystery, it contains secrets about which we cannot claim to know. 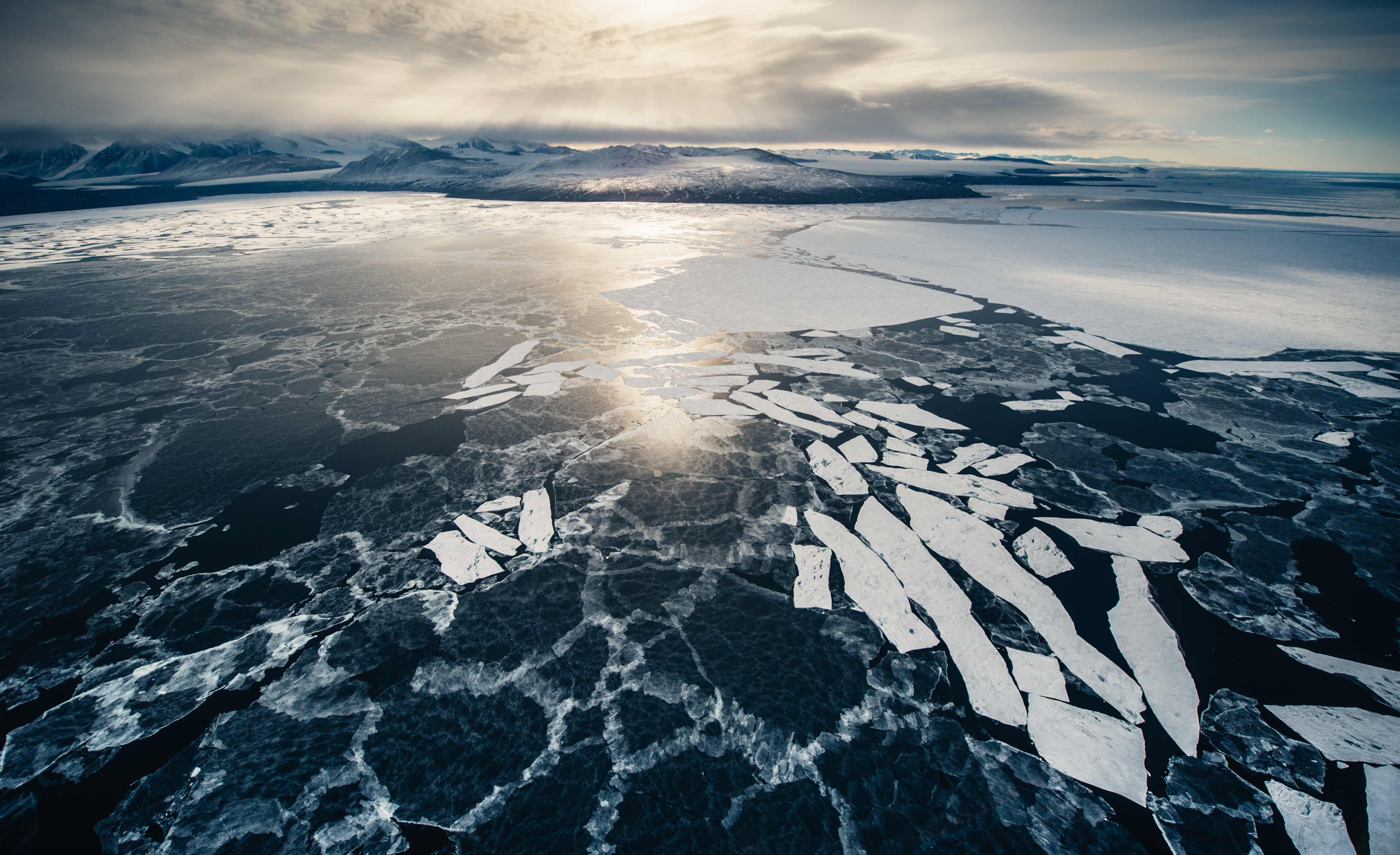 But Pugh has swum in the most extreme aquatic areas of the planet, not to mention the coldest, and the Bay of Whales in Antarctica is amongst the most foreboding he has experienced. 4,200m of water below you is a long way down when all you’ve got on is a pair of trunks. In -1.7℃ water temperature the line between life or death becomes thin, yet very clear.

“I would never swim in the Bay of Whales ever again. Ever,” Pugh tells me. “My wife was in the zodiac and small waves would hit up against it. The water would turn into slush mid-air and be whacking her. Deadly. Deadly.”

Pugh was educated at the University of Cape Town in the final days of apartheid, and this had a massive impact on the way he looks at the world around him. “It was impossible not to be inspired by men and women who put everything on the line for freedom, justice and equality,” says Pugh. “It took many, many years to affect that change. Once I committed to protecting [the Ross Sea] it was all or nothing. I staked my entire reputation on it.” 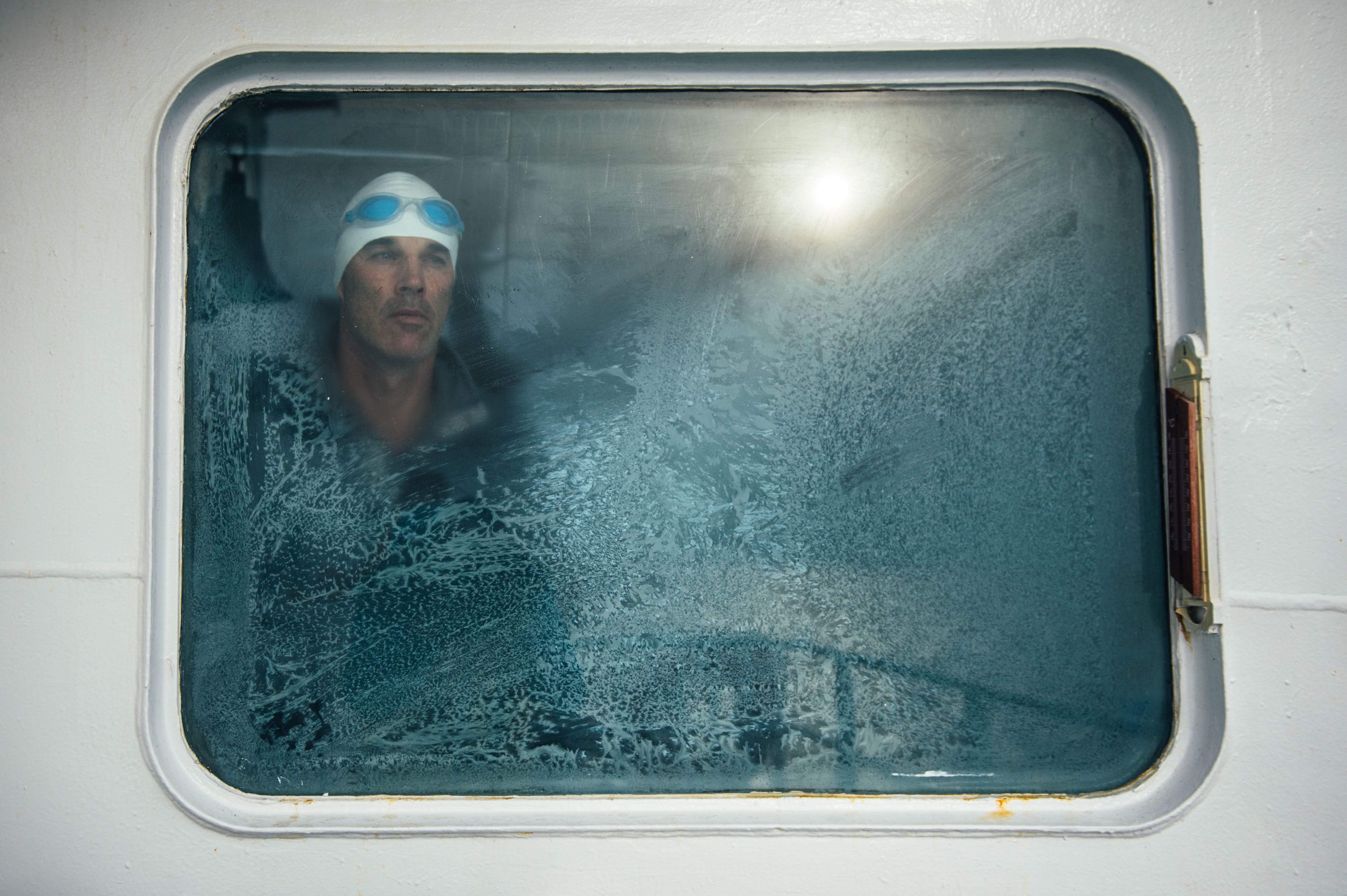 And it’s working. Pugh’s exploits have brought his passion for the oceans to some of the most influential minds in the field, his persistence, training and sheer bloody-mindedness causing those in positions of power to pause for thought.

There’s no long lasting physical damage from swimming in sub-zero temperatures but the immediate aftermath of such extreme exposure has left him with painful, unfeeling hands for months at a time, and a lifetime of sharp impressions on his psyche. You only have to view his TED Talks to see the resolve in his eyes.

Creating meaningful change on a global level is no mean feat, not least because of the cost involved. Pugh describes this process in three parts: drawing awareness, getting access, and having influence. We discuss Leonardo DiCaprio’s recent efforts in documentary Before The Flood which drew massive attention to his cause, for obvious reasons.

But even this kind of effort doesn’t guarantee access to world leaders, in fact Pugh gained access (and success) in Russia where Leo did not. Greenpeace activists were being held captive, international sanctions applied while the Ukraine face-off was in full swing. But Pugh’s resolve cut through. 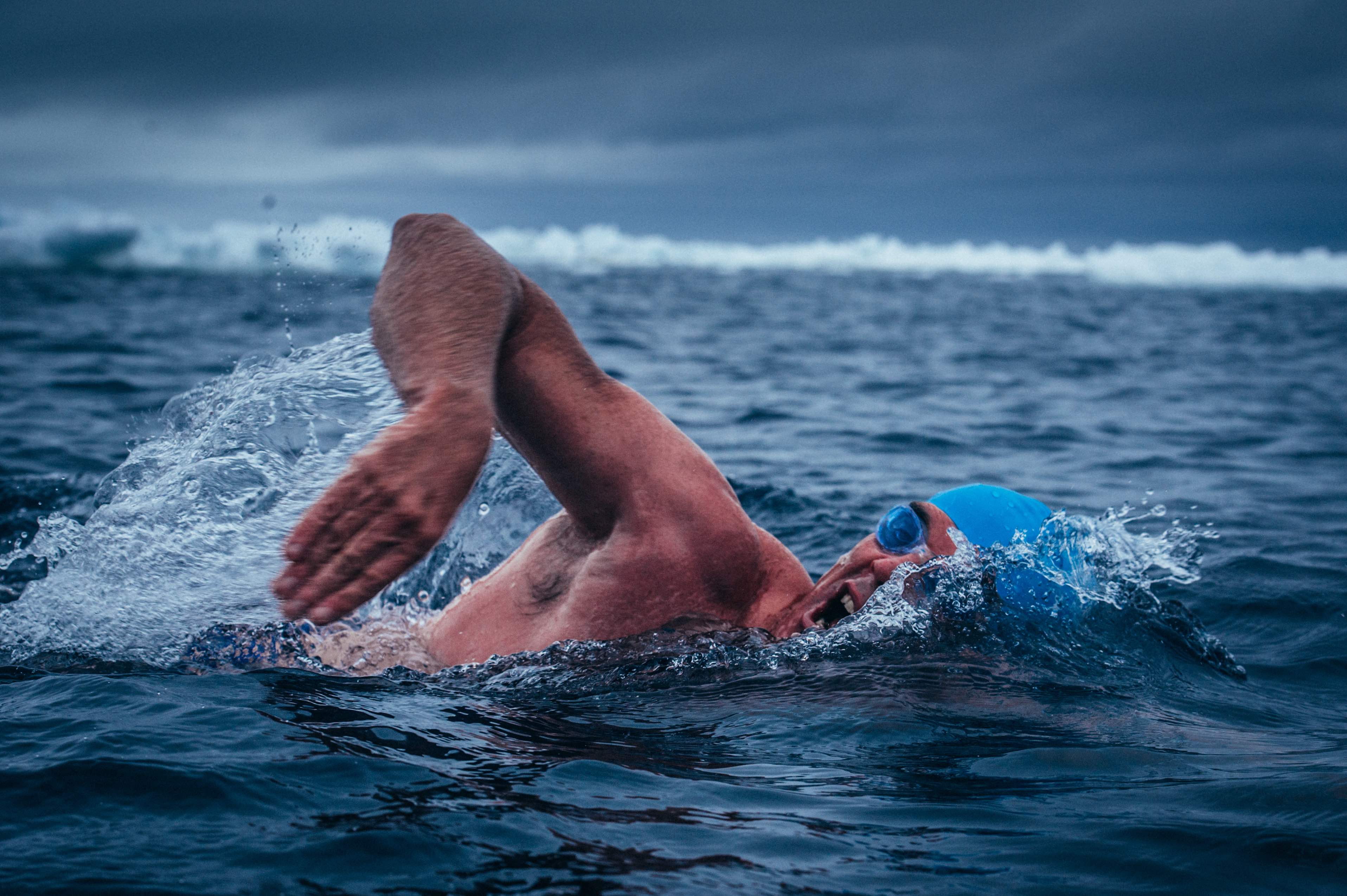 Our conversation covers an array of topics, from the “very, very painful to watch” killing and capture of dolphins in Taiji to the whale hunts at the The Faroe Islands’ grind. He cites northern Norway, Iceland and Greenland as examples to follow when it comes to developing ecotourism to provide income for local communities.

When I ask Pugh what’s next, he talks about his work at the foundation, searching for funds to help him meet the monumental challenges which the planet is set to face. He gives the impression he’s taken a big draw of breath since the Ross Sea success; the logistics, personnel and energy required were demanding on Pugh, and came at a cost. Pugh’s not a wealthy man, nor from a wealthy background, this campaign took his family “right to the edge”.

We come to the same conclusion though: the magnificent beauty of nature is worth protecting whatever the cost.

Find out more about Lewis Pugh by checking out his website.

Linkedin
RELATED ARTICLES
OTHER ARTICLES
Sean Maung’s photos are a love letter to the Black and brown communities that make up New York.
Following the announcement of an 80% hike in the energy price cap from 1st October, crowds gathered outside the offices of energy regulator Ofgem to protest and declare their intention to undertake a payment strike.
The two-day long event returned to London this year, showcasing a spectacular parade, steel bands and Caribbean food.
Ahead of the release of their first collaborative album, the producer and rapper talk psychedelics and the state of UK hip hop.
Rhiannon Adam spent three months capturing an ageing society wracked by division, isolation, and the aftermath of scandal.
A group of young Palestinians have found temporary freedom in the act of parkour, reimagining wreckage and ruins as a series of high-octane playgrounds.