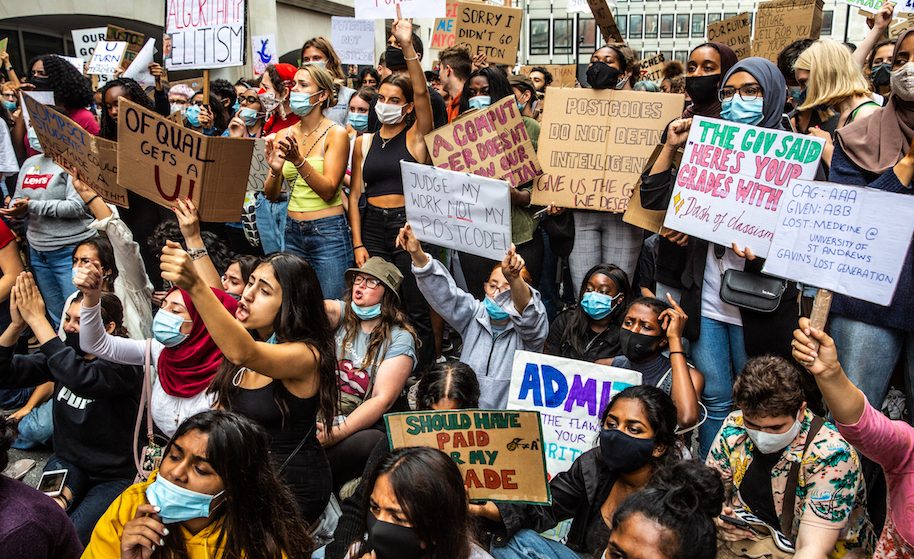 Proposals to introduce a minimum GCSE threshold for student loans will disproportionately affect those from marginalised backgrounds.

Proposals to introduce a minimum GCSE threshold for student loans will disproportionately affect those from marginalised backgrounds, reports Ella Glover.

Alex Birch says that there were a “lot of different factors” that contributed to her failing her Maths GCSE. “I was an undiagnosed autistic girl struggling in an under-resourced secondary school where truancy and low-academic attainment were the norm,” she explains. “Even in primary school, Maths was my least favourite academic subject, but classes became increasingly chaotic the further down the ‘set’ system I fell during secondary school.”

As a low-income pupil who couldn’t afford private tutoring, Alex would have been locked out of attending university under proposed reforms to the higher education system announced by the government last February. In response to the 2019 Auger review of post-18 education, the government unveiled a set of cost-cutting plans that would not only make university more difficult to get into by limiting places on courses that they believe don’t offer good routes into graduate jobs, but harder to pay for. This includes new – and harsher – minimum entry requirements for students looking to qualify for a student loan.

Under the reforms, students without a grade 4 (previously a grade C) in their Maths and English GCSEs would be denied student loans, as would students without two A-levels at grade E or above (students who fail their GCSEs but go on to achieve grade C or above at A-level would be exempt from this rule, as would mature and part-time students, and those with a Level 4 or 5 qualification).

Without the required GCSE grade, further education would be unaffordable Alex under proposed reforms. It was only a few years later, after she received an autism diagnosis, that Alex enrolled onto an Access to Higher Education course – a fast track route to university designed for “non-traditional” students – where she retook her Maths GCSE and eventually, brought her grade up from an E to a C. “When I opened my ‘C’ GCSE result I screamed with joy,” she recalls. “I got into my university of choice and ended up graduating with a First – I even got a First in one of my quantitative methods modules.”

Oh cool, so people like me with learning disabilities are just totally locked out of higher education now. Because disabled people don't have enough barriers in life.

The move will unequivocally impact the most disadvantaged students. This is because, while individual universities place entry-requirements on students looking to apply for certain courses, the government proposals would not block students from applying to university, but from funding it. In other words, students from wealthier backgrounds, who don’t rely on government loans to fund their education, will be unaffected by the reforms.

Analysis by The New Statesman found that in 2019, 55 per cent of disadvantaged students sitting GCSEs in England failed to obtain marks of grade 4 or above in both Maths and English. Two years later, in 2021, 70 percent of the same either failed to obtain a pass in more than one subject or did not sit their A-levels at all. The analysis found that Gypsy and Roma Traveller students, and students from a Black Caribbean background would be hit hardest (between 77 and 86 per cent and 20 and 52 per cent respectively). Analysis from the Institute for Fiscal Studies also showed that students entitled to free school meals as well as students from minority ethnic backgrounds would be most impacted.

“I have seen lots of people agreeing with [the policy proposals] since students who are unable to achieve those minimum requirements are almost always seen as lazy or incompetent,” Maira Rana, who sat her GCSEs at a Manchester state school in 2021, tells Huck. “But it’s unfair and out of touch to generalise and characterise pupils in this way. There can be, and there often are, such complex reasons as to why students may perform a certain way at GCSEs or A-levels. Having seen it first-hand in my peers, those reasons can be associated with financial struggles, mental health issues and difficult living conditions.”

The proposals, which would be introduced in 2023, have been called “regressive” by David Robinson, a researcher and the director of the post-16 education department at the Education Policy Institute (EPI), who says more thought should be given to ensure the most disadvantaged students aren’t disproportionately impacted. “At present, students who do not achieve a grade 4 in English and Maths at GCSE may have limited options in accessing Level 3 courses, including T Levels” he says. “This, in turn, means it is harder for them to secure two Es at A Level (or equivalent).”

He adds that, on top of the existing analysis which shows students from low-income families and minority ethnic backgrounds could be most affected, many of the students who will be applying for university in the next few years will also have experienced “considerable learning loss” as a result of the pandemic.

Maira is one of those pupils. “For my cohort, GCSEs were cancelled for the second year running due to lockdowns,” she says. “It certainly created a lot of uncertainty and panic: we had to do a lot more exams and tests compared to normal years because teachers had to provide evidence to justify our grades. The extra frenzy made me work very hard, and I felt like nothing was guaranteed.” She adds that she was fortunate enough to have the space and support to thoroughly revise, which isn’t the case for every student.

With this in mind, Robinson suggests that the government should consider whether “contextual factors, such as background or learning loss,” should also be taken into account when applying for student loans.

Again, it’s important to reiterate that, under these proposals, students who may have been given a place at a university – despite lacking certain qualifications – would be blocked from furthering their education if they couldn’t afford it. “Without a student loan, going to university becomes impossible for many students,” says Maira. “And the idea that pupils who don’t meet entry requirements in their GCSEs are incapable of going to university is misinformed.”

Alex agrees: “I’m glad that I got my GCSE in Maths in the end, but I have no doubt that even without it, I’d have been able to excel in a social science or humanities course,” she says. “Obviously, resources are finite, but it seems unfair that the children of the rich get to fail again and again without consequence, while the poor have their access to education gate kept by the government.”

Linkedin
RELATED ARTICLES
OTHER ARTICLES
Over the weekend, the United Families & Friends Campaign organised a protest calling for an end to deaths at the hands of the police.
A centuries-old tradition is offering families a way to honour the deceased, reports Arbab Ali.
Planet Ardbeg is a 40-page sci-fi anthology created by three cutting-edge artists.
We catch up with the singer in her London studio to connect the dots between music, painting and her relationship with the city.
A new photo series documents tribes preserving the environment through simple, sustainable practices in central Asia.
The hate Just Stop Oil faced after throwing soup over a Van Gough painting has been immense. Here, they explain why it won’t deter them.