News & Politics / On the brink of war, Ukrainians share their hopes and fears 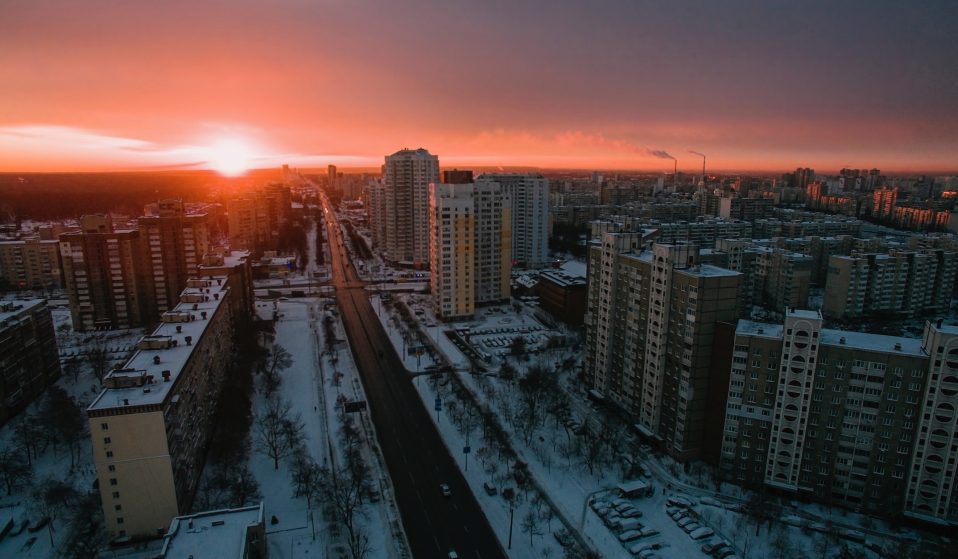 Ahead of Russia’s invasion, Kyiv residents spoke about the mood in the Ukrainian capital.

Earlier this week, ahead of Russia’s invasion, Kyiv residents spoke about the mood in the Ukrainian capital.

Seven years ago, we spoke to poets musicians, journalists and filmmakers heavily involved in the cultural and DIY scenes in Kyiv as part of our Change Issue. Now, in 2022, with tensions between Russia, Ukraine and the West mounting, we caught up with three of those individuals earlier this week, just before Russia’s invasion, to learn what the feeling was like on the ground in the Ukrainian capital.

Bichkraft were an industrial rock band from Kyiv whose unapologetic sound came at you in wave after sonic wave. When I last spoke to them in 2015, they sat hunched together in a dark flat, a dog asleep on the sofa next to them and talked about their desire to remain apolitical. It was 2am, and Serzh Kupriychuk, the band’s bassist, didn’t say a word.

Much has changed. Bichkraft is no more and now Serzh talks at length from a bright room, mid-afternoon, the dog replaced with a sleeping cat. His new band Pree Tone recorded their latest album in Iceland in pre-pandemic times. A reviewer has described the band’s sound as “Sonic Youth at their best time… and also somehow Television’s eponymous debut album from 1977.” More accessible, you might say.

But in other respects, a lot has stayed the same. In 2015, Russia had annexed Crimea and war was raging in the Donbas in eastern Ukraine. Now, as I write this, more Russian troops are piling into the Donbas. Despite blisteringly high tensions and much talk about an imminent invasion, Serzh says he’s preparing for a Pree Tone gig the next day. It’s a sign of how normal Serzh feels life in Kyiv is right now.

“If you’re on the street in Kyiv there is nothing that symbolises the prospect of war,” he says. “The streets and public transport are full. The traffic jams are still here – nothing has changed.”

He says that he reads much more about a coming war in western media. “When I read the UK media coverage, I see that we’re stuck in some political play in which Ukraine is not a player. We are just a pliable figure that Putin and western politicians are using to try to solve problems inside their own countries.”

He says that he’d read somewhere in the news that an attack was going to happen at 3am on the 16 February. “I was awake,” he says. “I went outside for a smoke. I looked up for planes in the sky, but all was quiet.”

Serzh says that he still understands the potential for war, and for what might happen. And yet still, his desire is for his music to remain apolitical. “I’m proud of a lot of Ukrainians, artists and musicians. And it’s very beautiful – sea, mountains, lakes, rivers, good soil where you can grow anything. But as a political organisation? I’m not proud of Ukraine.

“Here, 80 per cent of life is politicised,” he says. “We live on an atomic bomb. So I think music should be a place to relax and escape. We are against fascism, we are for peace – but that’s more of a humanistic expression, a fight for humanity, not just for Ukraine.”

Does he feel apathetic about the current situation? “Well, I feel nothing,” he says. “This is just the situation. For making Ukraine a better country, what can I do? I make my music… that’s all I can do. This is not our war. This is not our game.”

Annie Gryshchenko, a graphic designer and one of three founders of Laska – one of Kyiv’s first thrift shops – feels much the same. “Friends from abroad are asking me if I’m OK. In your news, we are fucked,” she says. “But in our news? Not so much.”

“I feel a bit scared, of course. But life is normal in Kyiv and I’ve decided to stay. I have my friends here. I have my family. Nice surroundings. Why should I move? This is my place, my house.”

In 2015, Annie was positive, hopeful: “We want to make the world a better place,” she said then. “Our society is oversaturated with things, some people have everything and others nothing. Our shop is a wonderful opportunity for people who have something to share.”

Nowadays, though, she’s taken a step back from Laska. She spends more time alone, working from home and painting, or snowboarding in the Carpathian Mountains in the west of the country.

One of Annie’s paintings sits on an easel next to her. It portrays a roaring tiger on a red background. “This is more about me,” she says. “I have aggression in me – I feel it! The tiger is that aggression.” But she says that she feels tired. She used to be involved in protests, or “involved in the revolution” as she put it.  Now, she’s more isolated.

“I was very into community [in 2015]. I was surrounded by people all the time. Now we have the pandemic and of course we talk about the current situation and what we will do if something happens. But we’re all tired, we don’t have the energy.

“And this isn’t our game,” she says. “It’s better to do things for myself. I’m upset by this feeling because it was my energy before, community was my belief. I was very active. But now I feel like a piece of meat and I don’t want to participate.

“It’s strange to live in a country where war is so close. And yet I don’t see it, I don’t feel it. Prices go up. We see stories in the news. Life goes on.”

Some are more daunted than others. Lyuba Yakimchuk is the most obviously concerned. She says she’s been stockpiling food and fuel, and bought a generator in case the power goes. She’s attended training with her husband in the past week. “I know how to use a walkie talkie,” she says. “I know how to stem bleeding.”

Are the others being are naïve? “We need to be prepared,” she says. “This is not normal. We are looking at invasion – in Kyiv. I don’t feel like this is an ordinary situation.”

Lyuba has a son, and she lost her family home in 2014 when the Luhansk region was occupied by Russian-backed militants. It’s closer to her, more real – the stakes higher, perhaps.

“These Russian troops on the border have surrounded us and the missiles are aimed at us from Belarus,” she says. “They are interfering in my life and in my work. It’s difficult to work like this.

“I don’t write about the situation as it’s so hard. I’m anxious one day, the next day I’m much more optimistic. Today I feel fine. I trust the Ukraine military. In general, I feel more confident than I felt in 2014.”

Seven years ago, Lyuba said she didn’t “feel hatred against anybody. I don’t know who to hate. That’s why I’m doing what I can do best, I’m writing.”

And now? “To feel hatred for someone, you must first feel love. I have never felt love for Russia or Putin, so I do not feel hatred. He is disgusting.

“This is a war. It is impossible to be neutral. A whole generation of people has grown up and taken up the function of the state to defend Ukraine. It’s very dangerous for us to have a neighbour who without any reason wants to extend their territories. It is unfair.”

A collection of Lyuba’s poetry called Apricots of Donbas was published last year. It explored the full range of emotional experiences brought on by the upheaval in Ukraine. Does she still believe that “artistic narration can create a nation”?

“Politics has an impact on all our lives,” she says. “But culture is what makes us who we are. The Russian government is only interested in a fiction that supports their narrative. If we don’t tell our stories then our enemies tell them for us.”

How to navigate these stories? Who to believe, who to distrust? Apathy or action? Hope or despair? In Kyiv, there’s no straight answer.

Linkedin
RELATED ARTICLES
OTHER ARTICLES
As she gears up for the release of her first book, the 24-year-old climate activist talks standing up to authority and building a more inclusive movement.
Activists and campaigners are fighting back against new laws that would seriously undermine the ability to take industrial action, calling it an attack on fundamental workers' rights.
Following the release of his debut single, Deyaz talks battling addiction, dealing with his struggles through music, and building a budding music career from his living room.
Social prescribing connects people with non-medical support to improve their health and wellbeing – but some experts worry it’s just a stick plaster solution.
A new law change is enabling Britain’s donor-conceived children to know the truth about their origins – but campaigners say the fertility industry must do more to protect people.
Filmmaker Laura Poitras discusses her new documentary which traces the remarkable life of the artist-activist and the impact of her battle against the US opioid crisis.