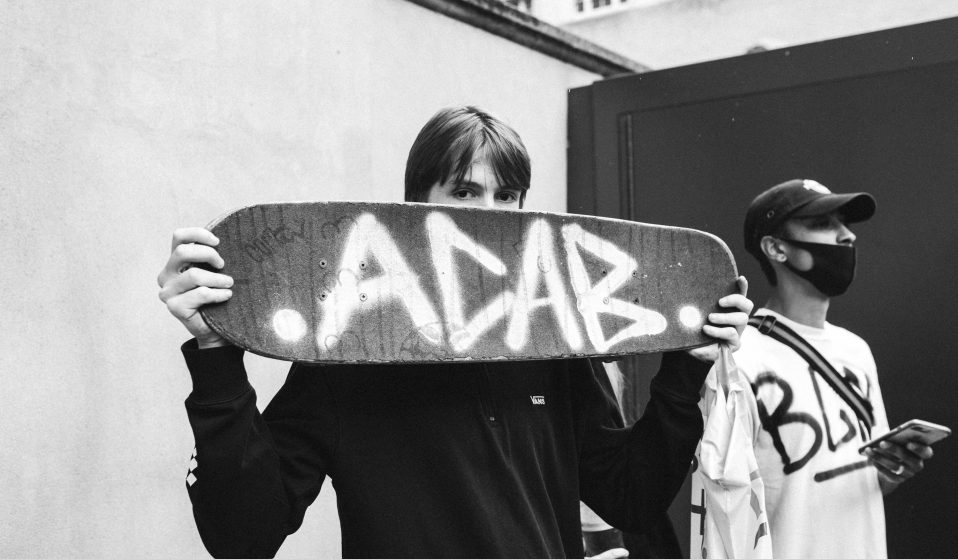 Over 20 years since the Stephen Lawrence Inquiry, the report’s findings remain true: the UK police are institutionally racist. Here, writer Micha Frazer-Carroll explains why the fight for justice is nowhere near over.

Over 20 years since the Stephen Lawrence Inquiry, the report’s findings remain true: the UK police are institutionally racist. Here, writer Micha Frazer-Carroll explains why the fight for justice is nowhere near over.

In the wake of the murder of George Floyd, our feeds have been swarmed with images of police violence. There was the video itself – shaky candid footage of white officer Derek Chauvin’s knee on Floyd’s neck for almost nine minutes, suffocating him in broad daylight. But violence has also characterised the fallout: we are repeatedly being exposed to images of peaceful protestors pinned down, shot at and tear-gassed by a militarized police force. Demonstrations have not only unfurled across each and every state in the US, but also across the world. This hasn’t been welcomed by all, particularly those who see international protestors as fighting a battle that is not theirs.

I vividly remember being confronted in 2016 – when I went out to protest the murder of Philando Castile, a 32-year-old American who was shot by the police after being pulled over in his car. An elderly white man watched the crowd pour between the cracks of central London traffic, and addressed me and my sister: “why are you causing that fuss here? This is an American issue.” It frustrated me, but his ignorance wasn’t necessarily unique – in fact, these comments were echoed by BBC Newsnight presenter Emily Maitlis just last week. “Our police aren’t armed, they don’t have guns… it’s not the same is it?” Maitlis asked George The Poet, who had just described how British police had left a friend of his in a vegetative state. But a brief look at UK police violence in the last decade alone will tell us that in many ways, it is in fact the same.

UK police use restraint on black people four times as often as with their white counterparts, and whilst black people only make up 3.3. per cent of our population, we account for 12 per cent of police altercations in which officers use force. That includes cases like that of Sarah Reed – who became the centre of a police brutality case in 2012, when Met Police constable James Kiddie yanked her by the hair, dragged her across the floor, pressed her neck and repeatedly punched her in the head. It also includes George The Poet’s friend, Julian Cole, who was accosted by six police officers outside a nightclub in 2013, and had his neck broken. Julian didn’t die, but due to police violence, the course of his life was radically altered.

When it comes to direct killings at the hands of the police, black people are also more than twice as likely to die in police custody than white people. Across demographics, there have been 402 deaths in Met police custody since 1990, and no convictions. In 2011, mass protest and unrest were seen across London after the shooting of Mark Duggan – a death in police custody for which the true story may never be fully known. The media falsely reported that Duggan fired the first shot, and leaned into portraying him as a gangster. Stafford Scott, originally appointed as an advisor on Operation Trident, resigned from the Independent Police Complaints Commission, writing in the Guardian: [The IPCC’s] investigation is flawed and in all probability tainted – so much so that we can never have faith in its final report.” Two other members of the public resigned from the investigation, one calling the body’s work “shoddy” – and only one remained.

Maitlis pointed out that our police are not armed – which is actually only a half-truth. Our police may carry tasers, which the Met are more than four times as likely to use on black people – and have been involved in deaths like that of Dalian Atkinson in 2016.

Then, there are the cases that take place behind the closed doors of the prison system – for which we may never receive clarity or justice. In prisons, misconduct can be less accountable, and negligence surrounding prisoners’ health problems operates as a form of indirect violence. Sarah Reed’s eventual death in prison in 2016 illustrates the violent outcomes of neglecting the mental health needs of prisoners. Reed had serious, long-standing mental health problems, and was found dead in her cell – and it is reported that she wasn’t receiving the medication she needed. In 2017, Anabella Landsberg was found dead in her prison cell in HMP Peterborough. Force had been used. In the hours after she died, a nurse had thrown a cup of cold water over her body, which still lay on the floor, and recorded that Landsberg was “seeking attention and faking medical issues”. Landsberg was diabetic.

Over 20 years since the Stephen Lawrence Inquiry, the report’s findings remain true: the UK police are institutionally racist. The examples provided above are not exhaustive – they never could be – but illustrate the ways in which, without the widespread use of firearms, the structure of the police is nonetheless inherently violent towards black people.

Linkedin
RELATED ARTICLES
OTHER ARTICLES
The pro skateboarder withdrew from the 2020 Olympic Games so he could come out as trans. Now, he’s hoping to encourage others to live as their authentic selves – within the sport and beyond.
Activists and campaigners are fighting back against new laws that would seriously undermine the ability to take industrial action, calling it an attack on fundamental workers' rights.
Jeffrey Henson Scales intimate portraits and protest images of the BPP and its leaders offer a rare insight into organisation at a time of societal upheaval.
Yohon Tatum, aka Legendary Father of the House of Tisci, reflects on nurturing a new generation of talent.
Campaigners reflect on what the supreme court’s decision to allow buffer zones in NI means for the future of reproductive rights in the UK.
David 'Dee' Delgado’s photo project is about honouring and uplifting the city of his youth, and a world rapidly disappearing under the relentless onslaught of gentrification.