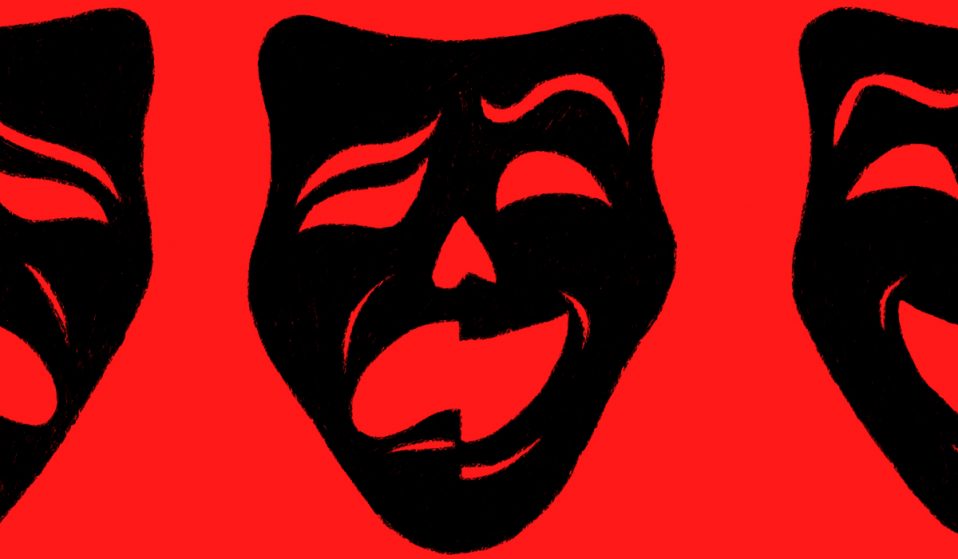 Satirical culture in the UK routinely protects the powerful and punches down. It’s time people stopped laughing along and took its threats seriously, writes Elia Cugini.

Nobody does satire like the British. From Yes, Minister to The Thick of It to Private Eye and Black Mirror, we have a reputation for political lampoons and razor-sharp satires that skewer societal issues, hold the government to account, and speak truth to power.

But in the 2020s, various luminaries of British satire have been focusing less on speaking truth to power and more on complaining about ‘wokeness’. Ricky Gervais has just released a Netflix special seemingly dedicated to railing about cancel culture in between anti-trans jokes. John Cleese has been making allegedly racist comments since 2011 about how London is “no longer an English city”, and is set to head up a series called Cancel Me about how the ‘woke brigade’ is restricting free speech. Perhaps most infamous for the satirist-to-reactionary trajectory is Father Ted creator Graham Linehan, who now spends most of his time harassing trans people on Substack.

It’s a strange time for satire in Britain, given that the Prime Minister has, if anything, benefited from it: his bumbling persona and talent for self-caricature have sheltered him and made him look harmless. Given that Boris Johnson has been invited onto Have I Got News For You, and used those appearances to launder his public image, it’s very difficult to land any punches on him via those same platforms. Indeed, Britain’s satirical culture can protect the powerful as easily as it can criticise them.

British satire has never been consistently good at ‘punching up’. Author and critic Huw Lemmey has documented Private Eye’s long history of homophobia: “Much of its coverage of the AIDS crisis […] was marked by an almost gleeful cruelty that, in all honesty, would not have been out of place in a National Front newspaper.” Lemney claims Private Eye’s well-connected in-group of writers were animated by a shared public-school disdain for homosexuality, where gay people were consistently presented as weak, perverted and predatory. Gay satire of straight society was never going to be platformed within that culture. (Private Eye is also consistently transphobic, which is hardly a cutting-edge countercultural stance in a country where every major newspaper is transphobic.)

Satire can be used well or badly; shows like Little Britain, which used blackface and relied on racist and classist stereotypes, came in for plenty of criticism both in their time and after. But there’s a deeper problem with satirical culture in the UK and the way it’s run by small groups of primarily rich, white Englishmen, who all know each other, are deeply tied to Oxbridge and other exclusive institutions, and cultivate an image of superior intelligence and sense.

Ricky Gervais has a new stand up show out on Netflix today.

5 minutes in and he’s making jokes about trans women attacking & raping people in public bathrooms. To him we exist only as a punchline, a threat, something less than human.

British satire can reveal and criticise our cultural foibles and failures: think of Brass Eye’s attack on British media sensationalism in its episodes on drugs and sex, or the treatment of class anxiety in Keeping Up Appearances and Fawlty Towers. But when comics who have come through the Oxbridge-to-satire pipeline – through the Cambridge Footlights, for instance – are the ones designing, funding and producing the shows, their class commitments and cultural biases are replicated in those very shows. Even when British satirists are nominally anti-Tory, they’re far more likely to scratch at their class-based irritation at progressives than to effectively target someone like Boris Johnson – a rich Oxford man who’s built his career on being a walking Spitting Image character.

I grew up watching shows like Mock the Week and Have I Got News For You, which always felt wedded to a very British idea of good, old-fashioned common sense: the idea that we’re all sitting around a table shaking our heads at how ridiculous everything is. But who does this common sense serve when it fails to recognise the absurdity of the ruling party’s ongoing political scandals and open corruption? It’s a shallow approach to satire that keeps anyone sidelined whose perspective isn’t seen as universal or apolitical, such as women, people of colour and queer and trans people.

A couple of months ago, I stumbled on a 2021 transphobic novel, Simon Edge’s The End of the World is Flat, that satirises the movement for trans rights. In it, a Stonewall allegory – a harmless mapmaking charity called the Orange Peel Foundation – is hijacked by an evil billionaire, who wishes to brainwash everyone, via Twitter, into believing the earth is flat. It is very badly written – trust me, it’s not even fun to hate-read – and while it’s available in large bookstores, it almost certainly won’t top any bestseller lists.

But it does worry me, because it shows how effectively satire can be weaponised to normalise conspiracy theories. The author of this book is so enamoured of the idea that trans people are false flag actors that he propagates terrifying fantasies to explain pro-trans activism, including the historically antisemitic idea that progressive movements are secretly the work of shadowy billionaires. (According to the book, he also appears to think Stonewall invented trans rights activism to stop itself being put out of business after gay marriage was legalised, because obviously, gay marriage ended all homophobia and anti-gay discrimination.)

The criminal thing about all this is that the book isn’t even funny, just like how Ricky Gervais’s riffs on how he “identifies as a chimp” aren’t funny. It’s not about wanting a neutered, ‘politically correct’ style of comedy, either: British conservatives seem to have conveniently forgotten that the most prominent leftist satire on UK television is run by Frankie Boyle. But centrist and conservative comedians are prioritising class affinity with the Tories, bigotry, and an aesthetic dislike of earnest progressivism over any desire to understand why they’re getting backlash, which leads to snide, toothless comedy that drives exhausting culture wars.

A good satirist cannot be wedded to the idea that they’re the unchanging voice of reason, free of serious biases and areas of ignorance. Contempt for a vague, emotive idea of ‘wokery’ might sell TV specials, but it cultivates a kind of laughter that doesn’t offer joy, or relief, but crowing: a spiteful announcement that you’re in the in-group, you get the joke, and anyone who doesn’t had better leave the room.

If we’re going to challenge the Tories’ use of culture war rhetoric at the next election, it’s not enough to stop laughing along. Jokes are a test of what the public will find acceptable, whether they’ll allow bigotry to be used as a glue to hold them together against an enemy. We have to challenge this humourless kind of laughter, or the violence behind it will only get stronger.

Linkedin
OTHER ARTICLES
Jamel Shabazz’s photos honour those who were lost and those who survived one of the most brutal eras in recent history.
After voting to strike across England, prison teachers explain why they’ve been pushed to a breaking point.
After being subject to racism growing up, Kavi Pujara’s photo series allowed him to reconnect with and reimagine his hometown.
SOAS Detainee Support detail the appalling conditions they witnessed at the dangerously overcrowded immigration centre in Kent.
A centuries-old tradition is offering families a way to honour the deceased, reports Arbab Ali.
Shaunak Sen discusses his documentary chronicling an ad hoc hospital’s efforts to protect the city’s birds of prey.