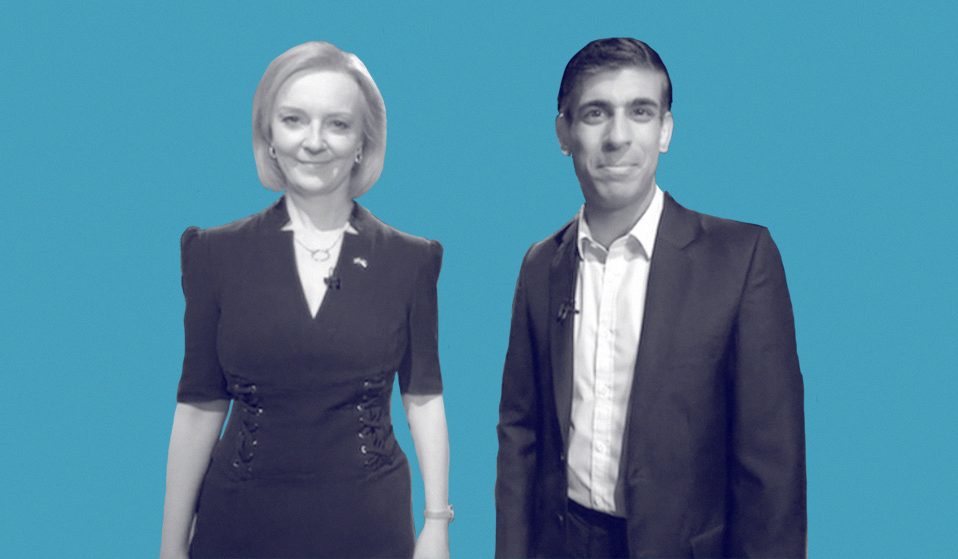 The Conservative leadership contest has exposed an obvious truth: whether our next prime minister is a woman, or a British-Asian man, they will continue to fan the flames of division.

The Conservative leadership contest has further exposed an obvious truth: whether our next prime minister is a woman, or a British-Asian man, they will continue to fan the flames of division.

As the dust settled, no clear winner emerged. Before the debate Truss was polling ahead among Conservative party members, with Sunak proving significantly more popular with Tory voters. He has been praised by Tory supporters as the “only choice”, with many also applauding the ‘diversity’ of those vying for Prime Minister.

Commentators from all parts of the political spectrum are rejoicing at the prospect of a British Asian Prime Minister, declaring it to be ‘the progress we need’. But the prospect of a Brown Prime Minister is no cause for celebration, when Rishi Sunak has shown time and again, that he’ll support the interests of the billionaire class, over and above the interests of Black, brown and white working people.

Last night once again Sunak shamelessly exploited his own family’s migration story, about how they came to the UK to build a ‘better future’. His grandparents were originally Punjabi Indian, his father, a GP, born in Kenya and his mother, a pharmacist, born in Tanzania. His campaign sells migrant communities a story we all know too well, and sells us all a ‘humble beginnings’ narrative that seeks to make him relatable to working people across the country.

But Sunak’s leveraging of his family’s migrant background to win votes is disingenuous, offensive and dangerous for the multiracial working class in the UK. If representation is about representing the interests of our own communities, the only community Rishi Sunak represents is the elite and wealthy.

The richest man in the House of Commons, he owns four homes worth an estimated £15 million with his wife, Akshata Murty, whose joint wealth stands at £730 million. A multi-millionaire by his mid-twenties, Sunak is certainly no ‘man of the people’. It is no surprise that as Chancellor he gave banks a tax cut, whilst crushing working people and cutting vital income support for millions of the UK’s poorest families.

He has consistently propped up the most hateful and violent immigration policies the UK has seen in decades and is now vowing to continue this campaign of cruelty as Prime Minister. Just this weekend, both Sunak and Truss announced even more brutal anti-refugee policies, including plans to introduce more Rwanda-style deals to deport refugees from the UK to countries where they have no connection to. Sunak has said he wants to cap the number of refugees in the UK, tighten the definition of who can claim asylum, and withhold aid from countries that do not receive deportations from the UK.

Rishi Sunak has even suggested he would ‘house’ refugees in cruise ships rather than in hotels to save money, which even Truss’s campaign has criticised for leading to arbitrary detention and breach international law. He has insisted “no option should be off the table” when it comes to immigration policy, which essentially means there would be no limit to the immorality and brutality he could inflict on people’s lives.

Sunak voted through the abhorrent Nationality and Borders Act and previously voted in favour of several hostile environment policies, including criminalising those who rent a home, drive or work with precarious status, as well as introducing immigration checks for those seeking to open a bank account.

Any suggestion that Rishi Sunak’s leadership would be “profoundly significant” by simple virtue of his South Asian heritage, is deeply misguided. In fact, it only renders his campaign all the more sinister and sadistic, to see him leverage his own family’s experience of migration to push through more and more draconian and immoral plans.

Rishi Sunak has always heartlessly disregarded the lives of migrants and refugees in the UK. He has always been fiercely committed to violent anti-migrant policies. He is ready and willing to continue to throw migrant communities under the bus, to shore up his own position as the UK’s next Prime Minister. And worse still, he is using his identity as a second-generation South Asian migrant to accomplish this.

But the colour of his skin, or where his parents were born, means nothing to working class communities in the UK, when his bid for leadership will only harm us more. The British ruling classes have historically used ‘divide and rule’ tactics, often drawn along racial lines, to maintain social control. So we know that any form of representation in the upper echelons of the Tory party has nothing to do with progress, and everything to do with power. It symbolises a sinister shift to the right, where Black and Brown Ministers become a mask for some of this Government’s most racist laws and policies.

Now that we see Rishi Sunak fanning the flames of division against migrant communities to rise to the top, we must come together to douse the fire. We must demand that politicians and leaders start to dismantle an increasingly hostile immigration system, and instead centre care and compassion, as well as safety and support for people who move to the UK. And where Parliament fails us, we must take to collective resistance against immigration raids, detention and deportation flights, to stop our friends, family and neighbours being ripped from our communities.

Rishi Sunak can spin all his propaganda about the UK being a place of ‘opportunity’. He can talk all he likes about his family coming to the UK for a ‘better future’. But his words are hollow and empty when his policies will destroy the futures of thousands more migrants and refugees across the UK, who also came here to be reunited with their loved ones or to rebuild their lives.

Whether we have a female Prime Minister, or a British Asian Prime Minister is irrelevant – both will always put profit and power above people. If this Tory leadership race has taught us anything, it is that we must leave representation behind, and start talking seriously about liberation instead.

Linkedin
RELATED ARTICLES
OTHER ARTICLES
Yesterday, rail workers came together to protest poor pay, working conditions and job cuts in their latest round of strikes.
Following the release of his latest album, the rapper talks about finding a new approach to songwriting, attitudes to poverty, and why his music is more than a political statement.
Steel City is often overlooked when it comes to the country's cultural radar despite its role in shaping electronic music.
After rewriting the indie rulebook with her devastating songs about romantic longing, the singer-songwriter is now imagining a future in which the artist is no longer a product.
To mark the premiere of his new documentary on surfing giant Gerry Lopez, the filmmaker and former pro skateboarder sits down to share his unique brand of wisdom.
Protestors gathered outside Downing Street following the latest atrocities committed by Israel against Palestinians living in the besieged strip.