News & Politics / Opinion / Oi Zizek, stop saying there is no difference between the fascist Le Pen and Macron 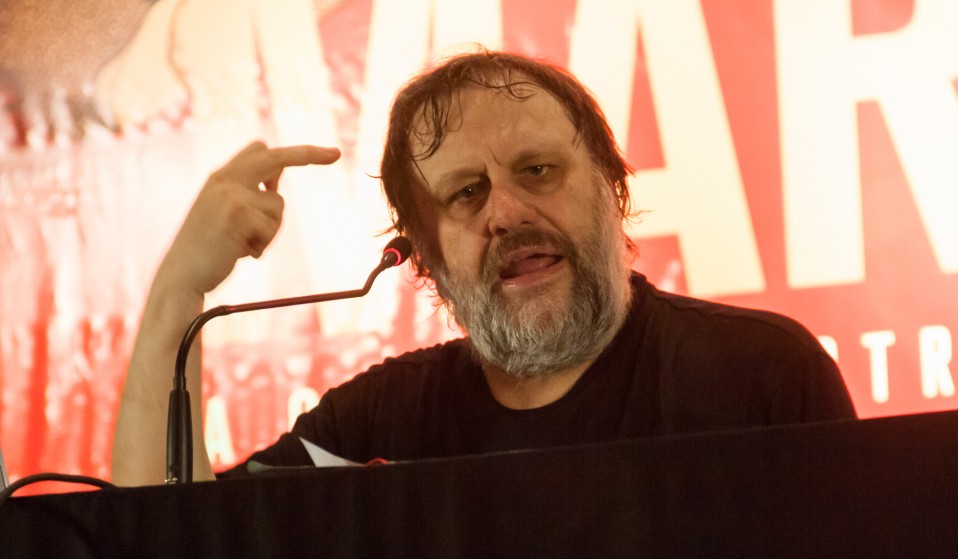 The French Presidential race has just two contenders. One of them is a fascist, the other is not. There should be no confusion about which is worse. Right?

The French Presidential race now has just two contenders. One of them is a fascist, the other is not. There should be no confusion about which is worse. Right? Left-wing intellectual Slavoj Žižek reckons both are as bad as each other, but he's wrong.

For a man who sees intractable political differences carved into the toilet designs of various European nations, academic, author and philosopher Slavoj Žižek displays a surprising level of shortsightedness when it comes to spotting differences between actual politicians.

In a recent article, he argued that the choice between Le Pen and Macron in the upcoming French presidential election is no real choice at all. He calls on the french electorate to reject the rigged terms of the vote: to abstain.

“The commonplace “enough talking, let’s act” is deeply deceiving – now, we should say precisely the opposite: enough of the pressure to do something, let’s begin to talk seriously, i.e., to think!”

The face off between Macron and Le Pen rings sickeningly familiar: a fight between a fascist, and an arch-defender of the system in which fascism is allowed to flourish. There’s little to argue with in this diagnosis: fascism takes flight when capitalist power recruits racism and nationalism to scapegoat migrants, queers and people of colour for the misery it causes.

Žižek characterises this battle between a hardline, anti-immigration right and a “party which stands for global capitalism as such, usually with relative tolerance towards abortion, gay rights, religious and ethnic minorities.”

Le Pen is openly Islamophobic, denies France’s role in the holocaust, rejoices in a family and party with active links to actual card carrying Nazis, and threatens to deport all migrants who “want to transform France into a giant squat”. Macron, whilst still complicit in Europe’s violent border policing, has come out against Islamophobia, and said that national security would “not be better served by closing national borders”.

For Žižek, this is a purely ornamental difference. That one political settlement openly declares its murderous intent towards some of its populace and the other does not is a light show that only serves to distract from realpolitik.

He does acknowledge that there are certain dangers promised by a Le Pen presidency: “But what [he] fear[s] no less is the assuagement that will follow Macron’s triumphant victory: sighs of relief from everywhere, thank god the danger was kept at bay”.

Echoing the terms of his tentative endorsement of Trump, he implies that, where a Macron victory allows those with progressive views to collapse into complacency, a Le Pen victory could ‘shock’ it into action. Le Pen’s victory would sharpen political differences, shaking us out of decades of pessimism and infighting.

Once again, Žižek happily coronates himself as latest champion in an illustrious line of white male accelerationists who glibly gamble on the lives of people of colour for the possibility of their pure revolution, while they kick back in comfort and wait for utopia.

Of course, for him the sigh of relief is exactly as dangerous as are the the vengeful howls of your average street fascist; neither pose the slightest threat to him. In his equivocation, Žižek appeals to the fact that the candidacies of both Le Pen and Macron are fuelled by fear. It seems to escape his notice that, for those people banding together to stop Le Pen, that fear might be entirely justified.

The difference between candidates actually matters if Le Pen’s brand of state fascism means you’re going to be deported, imprisoned, stripped of your rights, or attacked in the street.

No one is under the illusion that Macron provides salvation from the miseries of neoliberalism. If he wins, his ‘business-friendly’ economic settlement will still be tearing lives apart. People will still be dying at the gates of fortress Europe. LGBT folk will still be victimised by hate crime. Yes, it’s pretty galling for any leftwinger to have to hold their nose and vote Macron. In the fight against barbarism, a toadying ex-banker is no real, lasting ally.

But his victory does (temporarily) prevent the situation from turning even nastier. It’s disheartening that the electoral system offers us the choice between the dystopian and the merely dismal. But that choice matters. It matters because people’s lives are at stake. Macron represents a system in which fascism can flourish. Le Pen represents fascism that has already flourished, that is straining at the leash for the electoral go-ahead to wreak merry havoc.

Perhaps this havoc is a price that some are are willing to pay, in order to help chivvy along the revolution. But this view of liberation is grounded on a profoundly bizarre vision of how social change actually happens. The most marginalised people in society – migrants, people of colour, women, LGBT folk – have always been at the forefront of social movements. At Stonewall, in the early garment factories, in precarious workplaces across the country, those with their lives at stake and the world to gain have always been on the frontline of social change.

If he wants a revolution, the key is to ensure that marginalised folk are able to organise, to build collective strength. This vital work of movement-building is pretty hard to do if you’re being summarily deported, or if (as many french hijabis report) you’re afraid to leave your house for fear of racial violence. Jewish Bundists were not inspired to insurrection by a Nazi victory. Many were wiped out by it. ’Sharpening differences’ is not conducive to social change when those sharp differences are so readily slipped between the ribs of those most likely to achieve it.

For armchair abstentionists, all it would take to reinvigorate a “renewed radical left” would be for everyone to take a time out, ignore the gathering fascist insurgency, and just, really think about things, you know?

This frames the fight against fascism seems to be a purely theoretical affair: a bloodless, discursive struggle with little materially at stake other than one’s own sense of philosophical purity. In this battle, to vote for either candidate would be to tarnish the shining beacon of your radicalism. But when people’s lives hang in the balance, we can’t afford to treat the fight against fascism as a rhetorical game.

Linkedin
RELATED ARTICLES
OTHER ARTICLES
From the early originators to the female writers at the forefront of today’s scene, we talk to the artists redefining graffiti’s consciously macho origins.
Last week, Tower Hamlets council removed its nudity-restricting licensing conditions in a huge win for London’s kink community.
Photojournalist Fiora Garenzi spoke with people still living in Eastern Ukraine, an area which seen some of the heaviest fighting since the war began.
Students are being left to languish in unsafe housing, in some cases leading to serious health complications.
With the virus now a global health emergency, we must take steps to fight misinformation and demand a swift UK-wide vaccine roll out, writes Phil Samba.
After rewriting the indie rulebook with her devastating songs about romantic longing, the singer-songwriter is now imagining a future in which the artist is no longer a product.