News & Politics / Opinion / Soviet spy Corbyn? Tabloids have given up on journalism 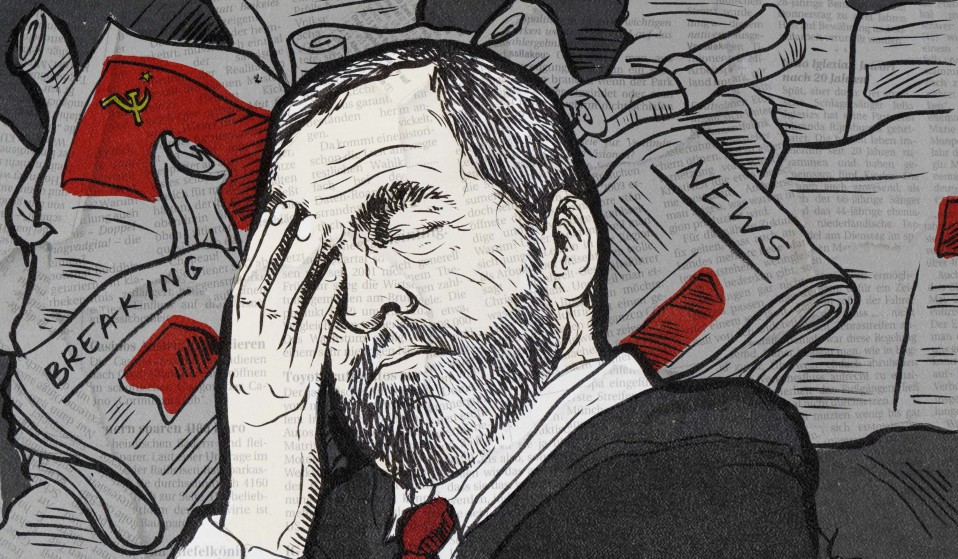 Terrified of a clampdown on tax avoidance, the right-wing press are now publishing lies and the nonsense claims of fantasists, writes Matt Zarb-Cousin.

The single source for the latest nonsense attempt to discredit Jeremy Corbyn is a fantasist, but that won't stop the right-wing press - terrified of a Labour clamp down on tax avoidance - from spreading lies, writes Matt Zarb-Cousin.

It has been almost two and a half years now since Jeremy Corbyn was first elected leader of the Labour Party, and throughout that time the right-wing and tabloid press have tried, and failed, to discredit the movement he represents. The attacks have ranged from Corbyn apparently dancing on the Cenotaph on Remembrance Sunday, to the ludicrous claim he threatened to call a Labour MP’s dad. The absurdity reached its peak last week when The Sun claimed Corbyn was a “collaborator” who was “recruited” by Czech intelligence services during the Cold War, with The Daily Mail accusing Corbyn of being paid by Czech secret police.

Despite what The Telegraph reported, Corbyn is adamant that he never knowingly met a spy, which seems believable given that official Czech records actually back this up. Jeremy Corbyn did meet Jan Sarkocy in London, and Sarkocy was indeed a Soviet spook, but they met when Corbyn believed Sarkocy (who was using a fake name) was a diplomat. It’s as simple as that.

What is frankly astonishing is that the right-wing press has based such serious allegations on the testimony of Sarkocy, who – with a little research – has made other claims which sound like the ramblings of a coked up bloke at a bar who keeps telling you he would’ve played for West Ham if he hadn’t injured his knee back in the day, mate.

Asked about what information Corbyn provided, Sarkocy told Slovakian publication Nový čas: “I’ll tell you this. I knew what Thatcher would have for breakfast, lunch and dinner, and what she would wear the next day.” Quite astonishingly, this claim – suggesting Corbyn was in fact secretly living with Margaret Thatcher – never made it onto the front page of The Sun. Perhaps because it’s clearly absolute nonsense and highlighting this “revelation” would discredit their source.

What he says next is even more bonkers. Sarkocy then goes on, in the same interview, to claim he was actually behind Live Aid. “I did that. We finally made a concert at Wembley. It was funded by Czechoslovakia.” Bob Geldof’s cover has finally been blown, it’s over. Take back the knighthood.

Sarkocy is such a laughable source, it would be funny if it wasn’t so serious. And yet it has been just a matter of weeks since Darren Osborne admitted he wanted to kill Jeremy Corbyn for being a “terrorist sympathiser”, a vulgar attack line The Sun, The Daily Mail and the Daily Express print with regularity.

Even now, the tabloid press are shirking their responsibilities to try and actually stand a story up before shouting their mouths off about something with potential to incite violence against a politician. This isn’t ignorance or an oversight, these editors and journalists know what they’re doing.

This whole debacle illustrates precisely the problem with Westminster lobby journalism. One source is enough, and it doesn’t matter if that source has got an agenda, or if they’re clearly a complete fantasist. If someone says something and it suits the narrative of the press, it’s reported as fact. It’s on the front page of the newspapers, it’s talked about on the bloody Today Programme, and it influences the news agenda of broadcasters – and by default the conversations we go on to have.

Even if it’s total bollocks. Even if the source is a man who has also accused the Czech Prime Minister Andrej Babis of being a Soviet informer in the 80s, recruited by Julius Suman, who later stood up in court and said he never recruited Babis. But Sarkocy totally discrediting himself isn’t important to the press, because he’s made up some nonsense about Corbyn that they think people will actually care about.

When this unravels, and it will, the right-wing tabloids, whose owners are terrified of not being able to avoid tax when Corbyn’s PM, will look even more stupid and agenda-driven than they already are. People in the Czech Republic are already laughing at how ridiculous the London press is for swallowing all this nonsense.

Is it any wonder the circulation of newspapers is in terminal decline when we can’t trust what we read in them. Instead of calling for a review into the sustainability of the printed press, Theresa May should revive her idea for a “fake news unit”  – and get them to focus on the right-wing tabloids.

Linkedin
RELATED ARTICLES
OTHER ARTICLES
As she gears up for the release of her first book, the 24-year-old climate activist talks standing up to authority and building a more inclusive movement.
Activists and campaigners are fighting back against new laws that would seriously undermine the ability to take industrial action, calling it an attack on fundamental workers' rights.
Filmmaker Laura Poitras discusses her new documentary which traces the remarkable life of the artist-activist and the impact of her battle against the US opioid crisis.
After fleeing the war in Ukraine, people are finding it impossible to secure affordable and decent housing in the UK.
A new film from Berghaus traces the story of Adam Raja, who left behind a turbulent upbringing to discover the healing power of climbing.
Theo McInnes’s photos of the annual event provide an intriguing snapshot of contemporary Britain.