News & Politics / Liberals are wrong: the fight against Trumpism isn’t over 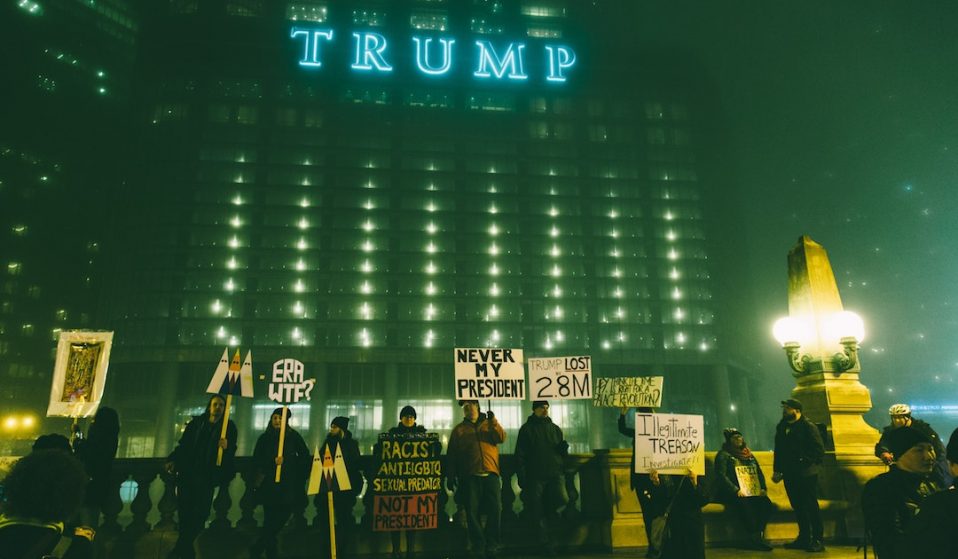 The inauguration of president Joe Biden marked a moment of shared relief. But the threats posed under Trump's presidency are still as urgent as ever, writes Huck's politics editor, Ben Smoke.

The inauguration of president Joe Biden marked a moment of shared relief. But the threats posed under Trump's presidency are still as urgent as ever, writes Huck's politics editor, Ben Smoke.

It was impossible not to feel relief on Wednesday. As a motorcade carrying newly inaugurated president Joe Biden rolled through deserted Washington streets, empty but for the thousands of National Guard deployed to the city the world let out a collective breath, the next inhale being a little easier.

After four very long years the volatile, infantile and often dangerous presidency of Donald J. Trump was over. Characterised by chaos, the spreading of hate and fear and, at points, deadly violence, it had been a tumultuous and fractious administration that came very close to ripping America apart. As the nuclear codes were moved out of reach of Trump’s hands, Twitter was alight with self-aggrandising and triumphalist tweets.

“The inmates are no longer in control of the asylum,” tweeted horror novelist Stephen King. Late-night host and comedian Jimmy Kimmel tweeted a video of the statue of Liberty dancing in celebration with the caption, “And that’s that”. Elsewhere, author Amy Siskind tweeted: “Can’t be said enough: We toppled a dictator”.

Leaving aside this heady summary of events, the celebratory, almost arrogant tone of so much of the content being pumped out by liberals both in the states and here betrayed the limit of liberal analysis and thought around the events of the last 4 years. There are those who believe that they have vanquished Trump and what he stands for. That the threat has now passed. That the far-right will simply slink back into relative obscurity now that they no longer have one of their own in the White House. That the last few years were but a fever dream; an aberration, an anomaly. But this couldn’t be further from the truth.

Despite the now widely regaled golden escalator origin story, Trump, and more importantly, Trumpism didn’t arise from nowhere. It wasn’t born the minute he announced his candidacy for the Presidency. It was, and is, a political and social crisis that has been decades in the making.

For some time now, the far-right has been on the move. Here in the UK, the 2010s were dominated by street movements of fascists like the English Defence League descending onto towns and cities across the country, spreading their message of hate and contempt. The TV-friendly faces of the far-right, Farage et al, spent the early part of the decade whipping up hate and hysteria as the poorest parts of the country were ravaged by austerity. In the US, the tea party steadily coiled it’s way around the Republican party, wreaking havoc and laying the groundwork for Trump’s meteoric rise.

These groups and movements found success because the people they targeted had long since been forgotten or ignored by the mainstream political establishment. Decades of neoliberal economic policy have driven poverty rates up, while tearing up the welfare state on this side of the Atlantic. Lacklustre interventions by the Obama administration in the shape of Obamacare simply stuck a plaster over the wounds inflicted by decades of rampant economic mismanagement that led to stark inequality across the 50 states. Whole swathes of the country forgotten, abandoned and left to fend for themselves as the rich continued to get richer.

2016 was a rough year. The seeds laid by inequality, by a burgeoning culture war, by passing the blame and by a staggering lack of ambition by centre-left parties in the shape of Miliband’s Labour and Clinton’s Democrats came into bloom with Trump and Brexit. ‘How could it come to this?’ many asked, taken by surprise by that which, in hindsight at least, is more than self-evident.

As Biden takes office, the heady mixture of poverty and hate that fuelled political success for the far-right hasn’t simply dissipated. The anger and the terror of the forgotten remains and it’s more dangerous than ever.

Biden’s first actions in office – the rejoining of the Paris Climate accords, the undoing of the Muslim ban, a moratorium on deportations – are important, necessary actions but huge question marks remain over his plans to radically reshape America and provide hope, opportunity and security to those who desperately need it. With the attack on the Capitol by Trump supporters laying heavy on the minds of many in the political establishment, the overwhelming message from the incoming administration has been unity. But a country as unequal and disparate as the US can never be brought together until the fundamental issues of economic inequality that run like an open wound through society are tackled and confronted head-on.

The threat from the far-right hasn’t evaporated. If anything, they are more powerful, more equipped, more organised and readier than ever to wreak havoc and spread hate and division. As Trump slinks off to lick his wounds in Mar-a-Lago, we shouldn’t underestimate the threat that he and his supporters still pose.

This week isn’t a week for celebration. It’s a week for action. A week for understanding the huge challenges that lay ahead, for putting forward a plan to tackle it that goes beyond mere words. If they don’t, the attack on the Capitol will prove to be just a precursor of what’s to come.

Linkedin
RELATED ARTICLES
OTHER ARTICLES
A new podcast is opening up the conversation between trans women and trans amorous men in the hope of building coalitions.
The action took place in response to the 200 asylum-seeking children who were placed in hotels run by the Home Office who have gone missing.
A new exhibitions brings together the work of photographers who documented the deep unrest of these pivotal decades.
Social prescribing connects people with non-medical support to improve their health and wellbeing – but some experts worry it’s just a stick plaster solution.
Activists and campaigners are fighting back against new laws that would seriously undermine the ability to take industrial action, calling it an attack on fundamental workers' rights.
Theo McInnes’s photos of the annual event provide an intriguing snapshot of contemporary Britain.