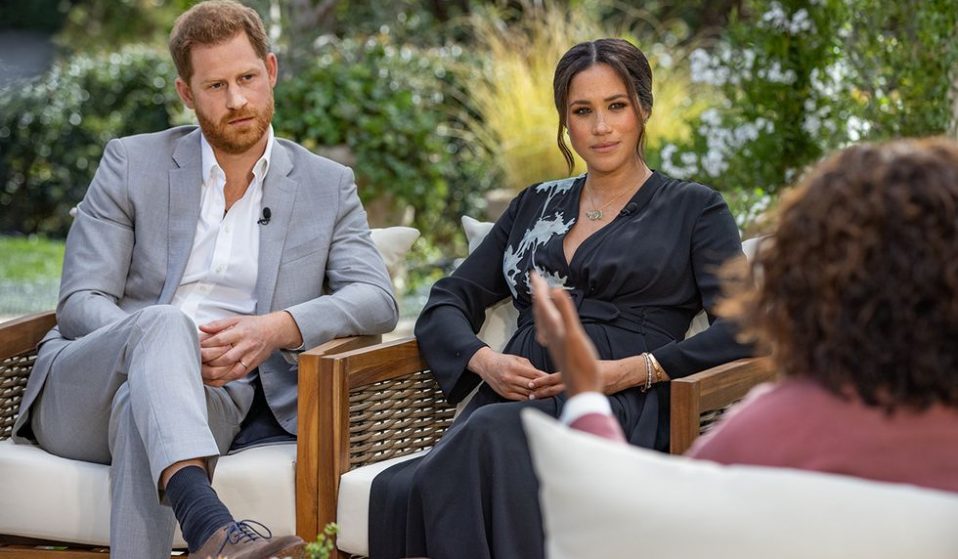 Photography © courtesy of Harpo Productions/CBS. The full interview aired on ITV on Monday March 8 and is on ITV Hub.

In the wake of the Oprah interview, defending Meghan – a figure with undeniable privilege – has felt uncomfortable for many. It is, however, possible and necessary to fight against these institutions while also condemning the racism those within it have faced, writes Chanté Joseph.

In the wake of the Oprah interview, defending Meghan – a figure with undeniable privilege – has felt uncomfortable for many. It is, however, possible and necessary to fight against these institutions while also condemning the racism those within it have faced, writes Chanté Joseph.

Oprah sat mouth open in disbelief when Meghan Markle told her that members of the royal family were discussing with great concern what colour her child would be. You don’t have to be a republican to think this is disgusting; you simply have to be human. In the interview, which aired first in America and then in the UK last night, Meghan tearfully retold the story of being treated like a prisoner in the palace and the absence of care she received while battling suicidal thoughts.

What dominated the interview was the brutal treatment of Meghan in the media, which has been fuelled by the royal family. These two institutions worked together to incite racism with headlines that clearly exhibited, as Harry describes it, “colonial undertones”. We learnt about the lack of protection given to their family and “The Firm’s” eagerness to alter hundreds of years old convention so as not to pollute the royal bloodline with a drop of Blackness.

Meghan’s interview and the subsequent media backlash further exposed something that we already knew: racism is an undeniable force in this country, and the monarchy is no exception to this. If anything, the Monarchy works to uphold and enforce a racist status quo. The hope of Meghan’s modernising the monarchy and providing some form of representation has proven entirely hollow. She could do little to revolutionise the monarchy; they will always represent Britain’s violent and cruel history, and having a non-white face in the family doesn’t do anything to erase this.

There is a considerable disconnect between modern royals and Black British people. Though our parents and grandparents were charmed by Diana, this generation is far from impressed by the bland, rich family. With the exception of The Crown on Netflix, for me, the mistreatment of Meghan was the first time I’d taken an interest in the modern royal family. The truth is that I didn’t suddenly care about the monarchy, but I could identify with the mistreatment and disrespect she experienced within the institution and by the press.

The British media has routinely launched aggressive attacks on Black women for merely “breathing”, which Meghan spoke about explicitly in the interview. Alexandra Burke, for example, had been bullied mercilessly by tabloid journalists like Dan Wootton; she had articles written about using the angry Black woman trope just days after her mother had passed. British media used the same tactics on Misha B, an X Factor contestant bullied on the show; this eventually spilt into the press, and she even considered suicide. Time and time again, Black women are used as a punching bag for the white British public to experience a long-lost colonial powertrip.

After the Meghan and Harry interview, the Society of Editors put out a statement refuting any idea that the British press was bigoted. In the statement, Ian Murray, the executive director, said: “The UK media has a proud record of calling out racism and also being at the forefront of campaigns to support mental health awareness.” The Society of Editors’ statement, read in conjunction with the slew of negative press the ex-Royals have received around the interview, looks more and more like a coordinated attempt at gaslighting black Britons en masse. It’s about making people feel as if they’re losing their mind and can no longer trust their reality.

Though there are scarce instances of the UK press calling out racism and drawing attention to mental health campaigns, there are far more examples of their complicity in fuelling and executing vicious racist attacks and character assassinations. They have driven celebrities and reality stars – overwhelmingly women – to mental lows, and in some cases, to suicide.

Elsewhere in the statement, Murray states: “It is a pity the couple did not mention in their interview the huge support the UK media has shown to the charitable works carried out by the Duke and Duchess.” The implication that a few instances where there weren’t racist or colonial undertones to the reporting somehow meant none of it was is clearly absurd.

Black British people are frequently gaslit about their experiences of racism, and the media plays an undeniably huge part in this. We are continually asked to explain, defend or debate claims of racism against a backdrop of doubt. We are made to feel like we’re lying, even when we know we’re not. There is a routine denial of the existence of racism in this country, which is what has made the last few days so difficult. Like so many other women, Meghan has experienced the painful extent to which the confluence of British racism and sexism tears women of colour apart.

In Meghan, we have someone who is unmistakably part of the establishment, with wealth, platform and security of powerful friends. Defending her has felt uncomfortable for many, as she represents many of the structures and institutions that uphold and perpetuate a racist status quo. It is, however, possible and necessary to fight against the institutions whilst also highlighting and exposing the racism one of those within it has faced. They are, as Oprah said, ‘symbiotic’.

The interview with Meghan and Harry was about taking power back. It provided a platform for an alternative narrative where normally there is none. Women of colour are rarely able to control their stories; we are simply subject to abuse and told to be grateful it wasn’t worse. Meghan’s stand, albeit from a point of privilege, should be a watershed moment. Her bravery in taking on the press should set the standard for those of us who no longer wish to be viciously bullied by the media and say once and for all that we as women of colour are no longer willing to stand for it.

Linkedin
RELATED ARTICLES
OTHER ARTICLES
For over a decade, gamblers have won big by employing people to place live bets from the court. But does this dubious method still work?
Financial turmoil is pushing people who work in the sex industry into more dangerous and desperate situations as a means of survival.
Thousands attended the annual event this year to wheelie through the city and call for ‘knives down, bikes up’.
Cindy Campbell recounts how her brother ushered in a new era of musical culture at a party she held in the Bronx in ‘70s.
Birdy Chu reflects on documenting the historic moment in which the territory was formally passed back from the UK to China.
Yesterday thousands gathered outside Buckingham Palace after news of the Queen’s death broke.