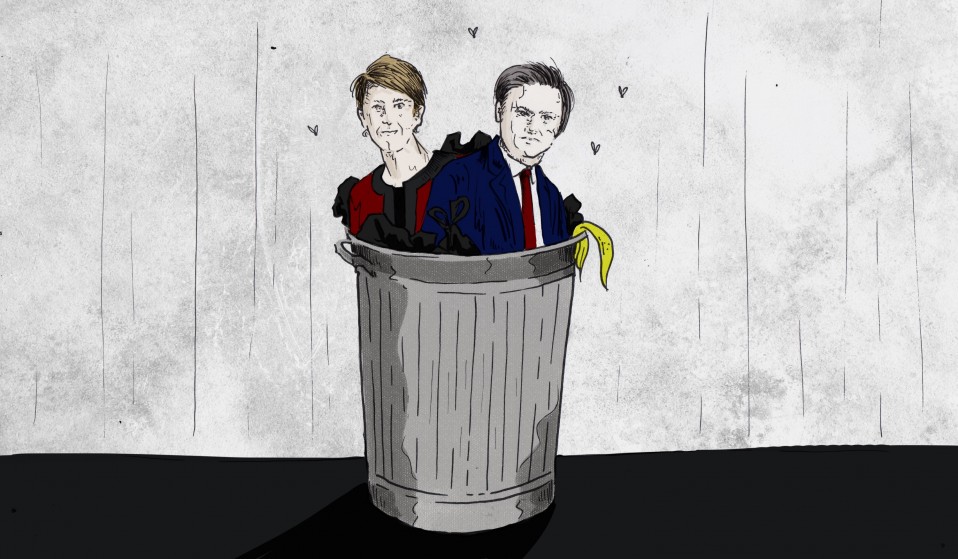 Last week it felt like we were making progress with tackling anti-Semitism in Labour, writes Rhea Wolfson. And then certain people had to go and ruin it.

Last week it felt like we were making progress with tackling anti-Semitism in Labour, writes Rhea Wolfson. And then certain people had to go and ruin it.

A turn for the worse would, perhaps, be an understatement of what has happened to the debate on anti-Semitism within the UK Labour Party. Tensions came to a head last week when two Jewish communal bodies, the Jewish Leadership Council (JLC) and the Board of Deputies of British Jews (BoD), called a public demonstration outside Parliament in response to Jeremy Corbyn commenting on, and being seen to endorse the preservation of, an anti-Semitic mural on Facebook some five years ago.

Following the protest, a debate ensued over the depth and extent of the problem of anti-Semitism in the Labour Party. It almost felt as if we were making progress.

And then on Monday, The Times published a story which claimed there had been an apparent mass exodus of members from the Labour Party on the back of the anti-Semitism stories. With very little effort, I discovered that when members lapse, they stay on the system for a further six months before they become leavers. The numbers published were old, and certainly didn’t equate to the picture being painted.

Why does this all matter? Well, there are some who are rightly furious about another Murdoch driven non-news story hitting out at the Labour Party. But that’s to be expected. For me, it goes beyond that. This story marked the turning point from serious debate about repugnant anti-Semitism into fabrication, political point-scoring and and abuse.

And then it got worse. On Monday night, Jeremy Corbyn attended a Passover meal with Jewish left-wing group Jewdas in his constituency, an engagement that had been made well in advance. Jewdas is a collective of radical Jews that focuses on diaspora Jewry, anti-Zionism and giving UK Jews a space outside of the self-appointed ‘mainstream’ to meet, pray, learn and party. Jewdas is famed for its satirical takes on UK Jewish communal life, and its thoughtful and humorous political and religious resources.

Jeremy Corbyn breaking matzah with Jews? Seems like a good move, given the ongoing controversy, right?

WRONG, READER! YOU ARE WRONG.

Wrong seder and wrong Jews, to be precise. Before the event was finished, Guido Fawkes (a trash, hard right wing blog) had posted about Corbyn’s night (I won’t link to it). And then we welcome back the self-appointed leadership. Before I’d had my morning coffee, Labour MPs of the ‘moderate’ variety had condemned Jeremy’s Passover. Joined by the JLC, BoD and the Jewish Labour Movement.

If there was confirmation needed that important conversations were being turned into a shitshow, this morning the Daily Mail ran a front page which, well, have a look for yourself.

Mama, we made it ? pic.twitter.com/MyGrnNnv1G

For those of us who are involved in the Jewish community, it has been a bizarre few days. We’ve watched fights that for so long had been fought within our own community being aired out in public. With, of course, the added bonus of a live commentary from non-Jews such as John Woodcock MP.

This is deliberately baiting the mainstream Jewish community days after they pleaded with him to tackle antisemitism. And he must know that meeting them now will give his members the message that the group’s extreme views are ok. Irresponsible and dangerous https://t.co/NORQQiFq8J

Corbyn’s attendance at the Jewdas seber reads as a blatant dismissal of the case made for tackling anti-Semitism in Labour. #EnoughisEnough

Back to the important question though: why does this all matter? Like the article in The Times, this is a distraction from the core issue of the genuine anti-Semitism that has made itself comfortable in the Labour Party. We have a mountain to climb on the left to eradicate anti-Semitism in all its forms. The climb is made harder, perhaps impossible, as long as the issue continues to framed as a factional fight between Corbyn supporters and sceptics.

This week has also shown a very ugly face of Jewish communal politics. Anyone active in the UK Jewish community knows that the old ‘two Jews, three synagogues’ joke, certainly rings true. And for a long time, many young left wing Jews haven’t felt comfortable or even welcome in a lot ‘mainstream’ spaces. Jewdas provides an important corner in the community that gives engaged Jews a space that fits politically.

Yesterday, communal leaders appear to have made the decision that Jewdas, and therefore those of us who identify with Jewdas, aren’t part of their narrative. Apparently we aren’t the right type of Jewish. Jonathan Arkush, Chair of the Board of Deputies, bizarrely called Jewdas ‘anti-Semitic’ live on national television.

It was galling to see Labour MPs use this communal fight to erase left wing Jews from our own community. They’re saying we aren’t valid and we don’t have legitimacy, just because we don’t fit with their narrative.

A guaranteed way to ensure that we fail to deal with anti-Semitism on the left, never mind in wider society, is to give those who deny its existence any excuses. There are groups who have argued that there is no problem, and this whole situation has been a fantasy built by those who don’t share Corbyn’s vision. Now, with the right-wing press and some of our own number attacking Jewdas and other parts of the Jewish community, the cranks in our party will no dount claim they were right all along. The communal effort to tackle bigotry is undermined.

We need to be clear: anti-Semitism is a problem on the left, and whilst there continues to be those who will cynically exploit this fact, that does not lessen our duty as socialists to weed out discrimination in all its forms. We must hold ourselves to the highest standards. The Labour Party is in the business of changing the world. Nothing more, nothing less. We can’t do that if we’re built on hypocrisy.

I feel hurt by today; I feel incredibly disappointed by those who have chosen to score the cheapest of political points at the expense of those who suffer from anti-Semitism and the knock on effects anti-Semitism has on society.

Those Labour MPs who have undermined our efforts. They, John Woodcock and Angela Smith included, must apologise.

But we are still building a movement, and I am bolstered by the commitment of Jewish socialists around me to be uncompromising in our fight against anti-Semitism. Uncompromising in calling out those who make fight harder for their own political means. And uncompromisingly committed to building a new politics in Britain.

Linkedin
RELATED ARTICLES
OTHER ARTICLES
A new film from Berghaus traces the story of Adam Raja, who left behind a turbulent upbringing to discover the healing power of climbing.
Photographer Sean Maung reflects on documenting a small town in Pennsylvania afflicted by high levels of unemployment, poverty, violence, crime, and addiction.
The pro skateboarder withdrew from the 2020 Olympic Games so he could come out as trans. Now, he’s hoping to encourage others to live as their authentic selves – within the sport and beyond.
A new podcast is opening up the conversation between trans women and trans amorous men in the hope of building coalitions.
After blocking the Scottish government’s gender recognition reform bill, Westminster is now devising further changes to the law to make it harder for trans people to self-identify.
After fleeing the war in Ukraine, people are finding it impossible to secure affordable and decent housing in the UK.