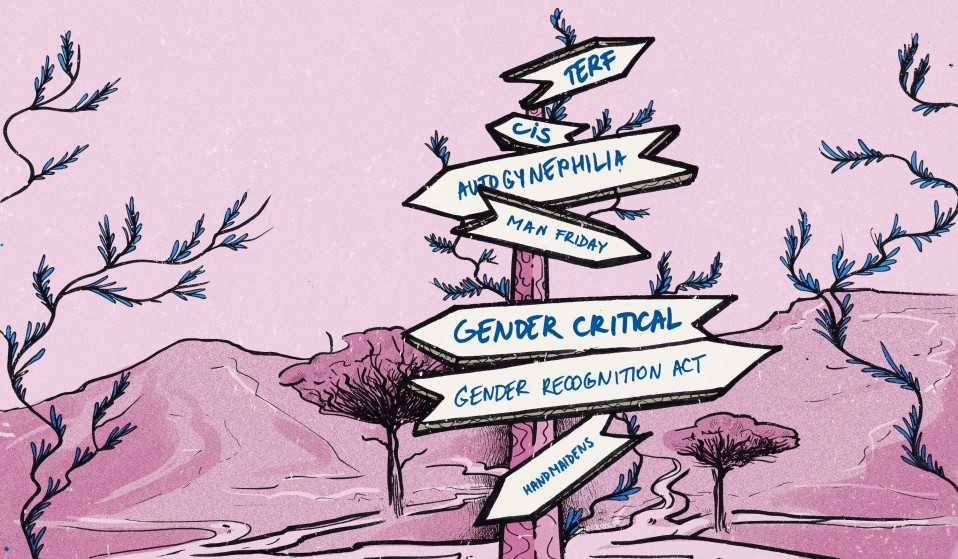 Parenting site Mumsnet, founded as a place of support, has become abundant with threads about trans people’s rights - as if they are up for debate.

Parenting site Mumsnet, founded as a place of support, has become abundant with threads about trans people’s rights - as if they are up for debate. The website, says former employee Hannah Woodhead, has a responsibility to step in and call this what it is: transphobia.

The internet is a godless country – just try spending five minutes on 4Chan, or in the comments section of the Daily Mail. Election tampering, hate speech, public pillorying – all the things you once had to leave the house for are now available at the prod of a finger. Of course, the internet is also a vehicle for change, a place to meet the love of your life, or find much-needed support.

When Mumsnet was founded in 2000, this was very much its raison d’etre. Its mission statement was simple: “Make parents’ lives easier by pooling knowledge, advice and support.” You truly see it all on the site’s forums, from those seeking advice about leaving their abusive partners, to parents struggling to cope with postnatal depression.

The website rose to prominence in the media following two notable incidents: Gordon Brown’s biscuit blunder (now a Mumsnet tradition) in 2009, and Penis Beakergate in 2013. Ever since, Mumsnet has occupied a very particular niche in the UK public consciousness. Their ‘Am I Being Unreasonable?’ forum – colloquially known as AIBU – is the source of much hilarity for members and ‘lurkers’ alike, with many of the national papers regularly lifting stories to generate their own clicks. In October 2017, Vice even ran a series where they asked Grime MCs to answer questions posed on the forums.

Building communities is Mumsnet’s bread and butter – scroll through the ‘Relationships’ and ‘Parenting’ forums to see that it really is a place of invaluable respite for many exhausted people around the world. Such a vibrant community has attracted considerable investment in the form of advertising and partnership deals, with corporate giants such as Lidl, Cadbury, Disney and Netflix all lining up to work with Mumsnet. With a reported 12 million unique monthly users, and I recall around a 100-strong staff, Mumsnet has considerable clout even beyond the billion-pound parenting market.

It makes sense, then, that a community built on the notion “it takes a village to raise a child” would be dedicated to supporting women. At least, it was, before it became a home to something darker – a space in which transphobia has found a virtual home.

The first threads about trans people date from 2012, but looking at the board today, almost every conversation started is about trans people and trans rights. And, away from the site, people are starting to take notice. Last week, Mumsnet referred itself to the data commissioner after a whistleblower exposed information relating to transphobic posters on the site. The website has seemingly found itself at the heart of an unfolding culture war: one where trans people’s lives, safety and security are up for debate.

The anti-trans community on Mumsnet is something of an open secret. It has been present for years, and it appears that there has, for a while, been a lax approach to tackling this particular form of hate speech.

Back in 2014, Mumsnet clarified their position on moderating transphobic posts, saying “transphobia is not welcome on Mumsnet”, while also stating “it seems to us that folk might very reasonably ask questions around transgenderism that are purely in the spirit of enquiry and in no way intended to give offence but which might, under specific guidelines on wording, be construed as transphobic.”

But in that time, Mumsnet has become a breeding ground for transphobic voices; a space where they can laugh about sabotaging an NHS survey aimed at LGBTQ+ users and scorn trans participation in sport, or ponder that trans rights are a millennial issue. On Twitter, where transphobia has less of a platform, ‘Gender Critical’ users began to recommend Mumsnet as a safe space for cis women to openly attack the trans community. There is particular contempt from this contingent of Mumsnet users towards activists who are vocal about trans rights, particularly Lily Madigan and Shon Faye (as well as gender-nonconforming individuals such as Jack Monroe).

One recurring theme is a suspicion among Mumsnet’s ‘Gender Critical’ contingent that there is an organised, funded effort to encourage children to be trans. Other conspiracy theories abound. A cursory search on Mumsnet reveals countless threads which link trans women to autogynephilia, a theory originally purported by sexologist Ray Blanchard in the 1980s that suggests being trans is a fetish related to “a man’s paraphilic tendency to be sexually aroused by the thought or image of himself as a woman.”

A few weeks back, several (since deleted) threads appeared on the site speculating that Nasim Najafi Aghdam, who shot three people at Youtube’s Silicon Valley campus, was a trans woman, and linked this to her violence.

The anti-trans feeling on Mumsnet has reached new heights in recent weeks. At the end of February, Mumsnet users led by Amy Desir came up with ‘Man Friday’. The purpose of the campaign – in which women attend male-only swimming sessions claiming to be men – is to highlight their grievances with trans women being able to self-identify as such.

Mumsnet is yet to comment on the campaign, which has become unofficially linked with the website, but the stunt at a London leisure centre received coverage in the national press, as well as the recognition of other “gender-critical feminists” including Guardian columnist Hadley Freeman.

Bolstered by this, campaigners on the site began recruiting. While these individuals believe that there is some organised legion of trans activists working against them to eradicate women’s rights and spaces, the opposite seems increasingly true – Mumsnet is now, in my view, home to the anti-trans lobby.

“Transphobia is against our Talk Guidelines,” Justine Roberts, Mumsnet CEO, tells Huck in a statement. “We delete transphobic posts when they’re reported and we ban repeat offenders. We’re an open-access site – anyone can join Mumsnet and be posting within seconds – and we are post-moderated, which means we only see posts that are reported to us. This means that at any given moment there could be posts on Mumsnet that we would not endorse.”

“We’ve also had open conversations with our users over recent months in which we’ve emphasised that we need the tone of the debate to be consistently civilised and respectful,” Roberts continues. “It’s a difficult topic and we’re feeling our way through it, but after many years of hosting debate on difficult topics we’ve learned that you either put in the hard work to enable a debate, or you censor and close everything down. We’d rather do the former.”

Roberts also tells Huck that Mumsnet has “engaged with a number of leading trans activists, such as activist and journalist Paris Lees, who appeared at one of our flagship events.” If you search ‘Paris Lees Mumsnet event you’ll land firstly on a thread titled ‘Why is Paris Lees speaking at Mumsnet’?

“You are fucking shitting me! Come on, MNHQ, how is this not a fuck you to us?” writes one poster.  “Something about validating the fact that Paris likes to present as female. That doesn’t seem to be very in line with MN values.” Many of the posts are similar, and if you search ‘Paris Lees’ on the site itself there is page after page of unpleasantness.

In a follow up email, Huck asked Roberts exactly which other activists had been engaged with. No further information was offered. Paris did speak at a single Mumsnet event back in 2016, but Paris wasn’t available for comment.

Mumsnet has always claimed impartiality in politics, but this principle seems to be in danger of justifying the often transphobic ‘debates’ hosted on its site. “Our apolitical stance isn’t because we don’t want to alienate users (although alienating users isn’t something we would do lightly); it’s because we want to be inclusive.”

Except Mumsnet does take political stances: from working with Public Health England, to rallying against Page 3, and they recently launched a campaign for better NHS postnatal care. There’s a whole page dedicated to Mumsnet campaigns. It seems that it would be within Mumsnet’s remit, if it so wished, to take a stand against transphobia. That would be truly inclusive.

“It’s important that the discussion is allowed to occur if a solution acceptable to all sides is to be found and simply labelling that discussion as bigoted or transphobic gets us nowhere,” explains Roberts. One might wonder how the “I Am Spartacus” thread –  in which posters wilfully misgender prominent trans activists – gets us anywhere.

“We’ve also had open conversations with our users over recent months in which we’ve emphasised that we need the tone of the debate to be consistently civilised and respectful,” Roberts continues.

It’s possible, of course, that this is Mumsnet’s intention – to facilitate open and honest discussion, even if they often turn sour.

Regardless of intention, it seems to me that Mumsnet has allowed transphobia to become associated with their brand through their inaction. These boards have now become nothing short of echo chambers, spaces in which anti-trans rhetoric is continually employed with little objection.

As a site on which, for all its avowed impartiality, political debates occur on a daily basis, I believe Mumsnet has failed to recognise a very basic principle: if your feminism doesn’t include trans women, it’s not feminism at all. It’s not right for Mumsnet, which has the ear of the government and gives a voice to parents across the UK, to have become hijacked by blatant transphobia.

Trans rights shouldn’t be up for debate – it wouldn’t be acceptable to speak about any other marginalised group the way trans people are spoken about on Mumsnet boards. They can, and should, do better.

Linkedin
RELATED ARTICLES
OTHER ARTICLES
A group of young Palestinians have found temporary freedom in the act of parkour, reimagining wreckage and ruins as a series of high-octane playgrounds.
Thousands attended the annual event this year to wheelie through the city and call for ‘knives down, bikes up’.
Birdy Chu reflects on documenting the historic moment in which the territory was formally passed back from the UK to China.
Financial turmoil is pushing people who work in the sex industry into more dangerous and desperate situations as a means of survival.
Sean Maung’s photos are a love letter to the Black and brown communities that make up New York.
Cindy Campbell recounts how her brother ushered in a new era of musical culture at a party she held in the Bronx in ‘70s.