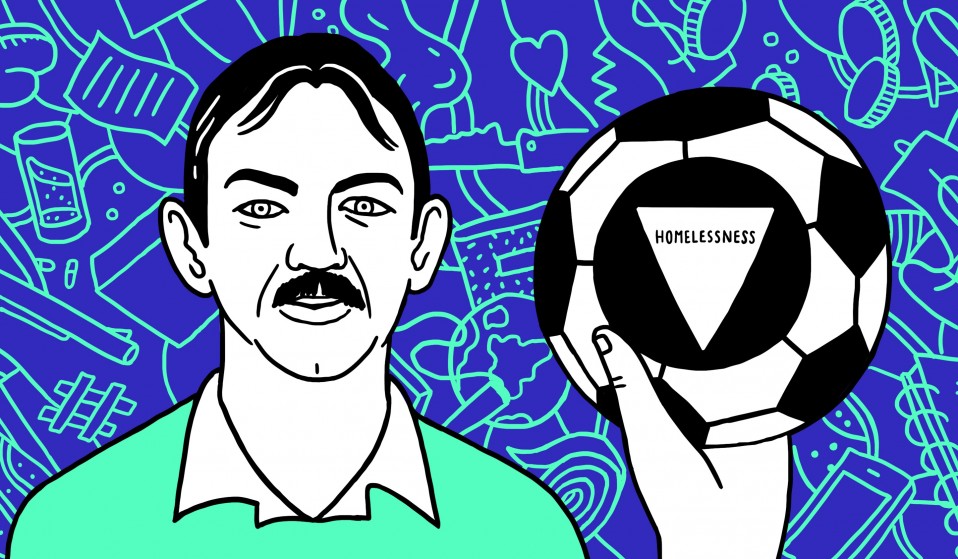 In his new column, footballing legend turned Twitter sensation Neville Southall takes on the biggest issues of our time, kicking off with homelessness.

In his new regular column, footballing legend turned Twitter sensation Neville Southall takes on the biggest issues of our time. For his debut, the unlikely activist takes on the homelessness crisis in Britain, accompanied by an original poem.

“Hi, can you spare some change?”

Sometimes these are the words none of us want to hear. We have seen what we believe to be either a beggar or a homeless person, and now we have to ask ourselves some serious questions. Is it really a beggar or a homeless person? How can we be sure? The answer is we probably cannot be sure, ok, so the next question we ask is what will they do with the money? If we feel they are ok then how much money is enough?

If we believe it is a homeless person we never ask how they have ended up in this position, but we question what he may spend the money on: food, drink, alcohol, drugs, shelter or clothing. Many of us would prefer to give a homeless person food or a hot drink, but the indecision of doing the right thing haunts us. As a human being it is human nature to want to help and nurture, but we do not want to encourage alcohol or drug abuse by giving money.

Who are we to judge them and what they spend money on? But we do.

It’s funny how sometimes we find ourselves looking for clues to tell us about that person and how we think they will spend the money they get. It may be their location or how they present themselves. We look at how they are dressed: dirty, smelly, unshaven, smoking or drinking beer. Without realising it we have taken all this in, and have made a judgement call before we decide to give them any money. The truth is, we know nothing about them or their lives.

Should we feel guilty if we do not give anything, or such a small amount that it will not buy them anything? I think the answer is so complicated. If you answer yes, I do feel guilty, then maybe that spare change you do give that will not affect your life may well add up with other peoples’ spare change and actually provide that person with some sustenance. You may already give to a charity on a regular basis.

If your answer is no, you do not feel guilty, then your view may be that they have brought on their demise themselves. Whatever you feel, would it be different if you knew their circumstances that led to homelessness?

How would you feel if they were an armed forces veteran who had suffered PTSD (Post Traumatic Stress Disorder) losing their job, house and family in a very short space of time? Would this mean you would give more to that person than the one you know developed a drug problem, was offered all the help and support available but turned it down and took to stealing to support their habit? As fellow human beings, we do not have the right to judge the person in front of us.

So what can we do in the short term to help the homeless find shelter, food, drink and mental and physical support? One thing we could do is use the old railway carriages for accommodation and open them up near the main train stations in the country, allotting rows of seats by number to each individual as a bed. Food could be provided in the old catering carriages, the guard’s vans could be used as storage for clean bedding, blankets and clothes. Social workers, nurses, doctors, mental health workers, counsellors, drug and alcohol rehabilitation workers would be available – anyone who could provide a service and support system in a one stop shop.

Apart from the obvious day to day benefits of a system like this to the homeless population, it would also allow a more sustainable bridge for them to get back into society. The running cost should be much cheaper than running shelters in city centres where rent and rates play a big part of costs. Companies would sponsor carriages to increase funds.

We somehow need to buy time to make a difference. People are dying on the streets because the government is not taking this problem as seriously as it should. Universal credit means we may now see an increase homelessness. There are currently thousands of homeless veterans – people who have risked life and limb for us. This is not the way to repay these brave individuals.

We need a plan where every new housing scheme includes a number of one bedroom flats to help and support homeless people so they do not face any difficulty on their own. We need every new football ground to have a number of supported flats which can be utilised by members of that local community. New office blocks must have flats attached where a homeless person can live and be sponsored and mentored by businesses to get back into work. New prisons need to provide flats as halfway houses for those finishing long-term sentences when it is known they will struggle with the drastic transition to freedom.

We need to start thinking outside of the box to solve this problem. It is disgusting that there are homeless people in Britain in 2018. Our homeless people are needlessly dying because of our inability as a nation and a government to act. It is a solvable crisis. I am not that clever but there are people out there who are and they can come up with real solutions, we need them now.

Every death is our shame.

This is a poem.

I’m dissolving into the urban setting.
The milk of human kindness is souring now.
My heart and soul wretched, torn.
No more human am I.
Sleeping on stony ground, waking to chaotic dawn.
Sodden. Filthy. Empty.

Linkedin
RELATED ARTICLES
OTHER ARTICLES
A new exhibitions brings together the work of photographers who documented the deep unrest of these pivotal decades.
Photographer Becky Tyrell went down to the fading banger and stock raceway to meet a community desperate to keep it alive.
Theo McInnes’s photos of the annual event provide an intriguing snapshot of contemporary Britain.
As she gears up for the release of her first book, the 24-year-old climate activist talks standing up to authority and building a more inclusive movement.
Filmmaker Laura Poitras discusses her new documentary which traces the remarkable life of the artist-activist and the impact of her battle against the US opioid crisis.
AI companies that develop image-generators using copyrighted artwork from the internet are coming under fire from artists who say that it amounts to theft.