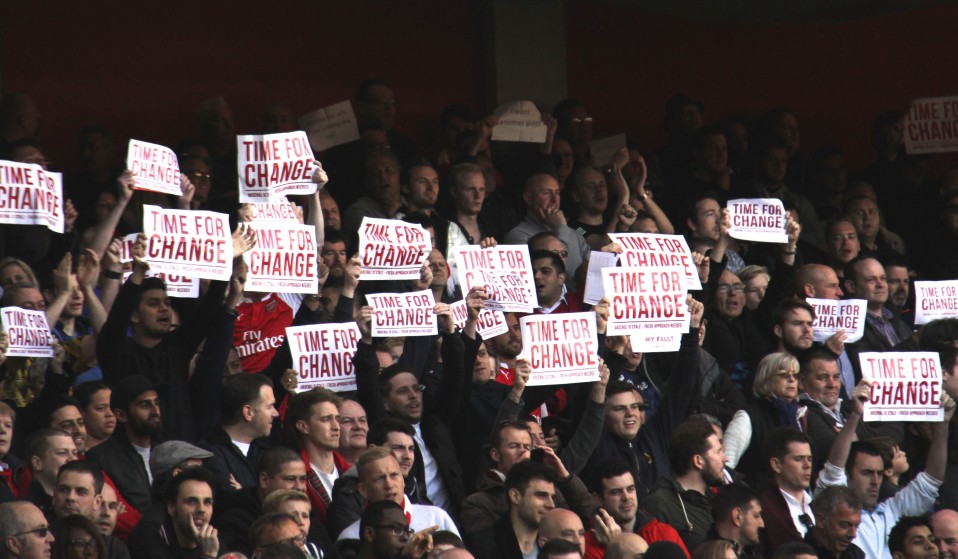 Football fans are revolting across the country, writes Matt Zarb-Cousin, and they're determined to put people not profit at the heart of the beautiful game.

Football fans are revolting across the country, writes Matt Zarb-Cousin, and they're determined to put people and not profit at the heart of the beautiful game.

When people make their pilgrimage to football on Saturday, they’ll arrive for a 3pm kick off unless the match is on TV. This sacrosanct time is a hangover from when teams weren’t professional, but made up of ordinary workers. The factories closed at 3 o’clock, at which point staff would burst out the doors to watch or play football against other industrial teams in an escape from the monotony and alienation of their labour.

The history of some Premier League clubs straddles three centuries. In 1886, the Dial Square workshop – a munitions factory at the Royal Arsenal – started life on the pitch as Dial Square, but later became Arsenal.

In 1878, the Carriage and Wagon department of the Lancashire and Yorkshire Railway depot at Newton Heath formed the Newton Heath LYR FC, which later became Manchester United. In 1895, the Thames Ironworks formed a football team, which a few years later became West Ham United.

The vast majority of professional football teams today can be traced back to working people, coming together in what little leisure time they had to set up teams and build communities around them. The teams became established clubs, but remained rooted in their communities, run – and often owned by – working people.

Iterations of these communities still exist today. People are often born into supporting a particular team, through a family link to an area or otherwise, or they might grow up as a fan of their local side. There’s a reassurance in knowing that whatever happens during the week at work, you can escape into the stadium on a Saturday to feel a part of something much bigger than yourself. An antidote to any feeling of alienation and isolation.

But fans are no longer considered a community by clubs. They’re treated as customers, whose loyalty to their team is exploited by the extractive corporations and billionaires who own Premier League football teams – the very capitalist class football was initially a form of rebellion against. Rather than offering an escape from the lingering monotony of daily life, Premier League football clubs now simply “sell an experience” at a rip off price.

Many fans remain in denial about the fact that the team they have invested so much emotion into is just a business, and they’re nothing more than its customers. It was perhaps easier for London’s West Ham United fans to delude themselves otherwise when they played home matches at their historic Boleyn Ground – the club’s home since 1904 – known as Upton Park.

But that stadium has since been sold by the owners, David Gold and David Sullivan, for a measly £38m – a drop in the ocean in London real estate terms – as they favoured a move to the Olympic Stadium in Stratford, which wasn’t designed for football, but has greater capacity and is costing them £2.5m a year to rent. Fans had no say in the move but were promised more investment in the team. They say this hasn’t happened; certainly, performances on the pitch have deteriorated.

Despairing West Ham supporters having no influence over the businessmen running their club attempted to take control back last week when they flooded the pitch and the area beneath the director’s box during a game as a act of protest. But what else can they do? Most of us feel powerless at work during the week, and rampant profit-making has eviscerated any meaningful stake fans once had in their club, or any influence in how it’s run.

It’s not just West Ham. This is a pattern across Premier League football, as match-day attendances dwindle. Manchester United was bought by the late US billionaire Malcolm Glazer, whose family now run the club. Borrowing against Manchester United, the Glazers leveraged the buyout, which plunged the club into debt. Adding this to what they’ve taken out as dividends, the Manchester United Supporters’ Club estimate their team has been drained of more than £1 billion since 2005.

Similarly, Arsenal was bought by “Silent” Stan Kroenke. Kroenke is a US billionaire who, it seems, hasn’t got the first idea about football. After winning a power struggle with Uzbeki billionaire Alisher Usmanov, Silent Stan owns 67% of Arsenal, and his company, KSE Holdings, describe themselves as “investors” in the club, rather than custodians. To this end, they’ve ramped up prices, making Arsenal the most expensive team to watch in Europe, charging £5 for a pint of beer, which – if you enjoy irony – you can buy from a bar named after Dial Square.

The board is totally unaccountable to its fans, and if Silent Stan buys all the shares in Arsenal as looks increasingly likely, he can make it a private company that won’t even be accountable to shareholders. He could, in theory, even register Arsenal in the US and not pay any tax on the club’s profits in the UK, if he so wished.

Manchester United’s relative success on the pitch acted as an opiate for substandard custodianship, but they’re now struggling to compete. Relative to their revenue, Arsenal have been underachieving for years, which is why fans are staging regular protests against the board and manager Arsene Wenger – a symptom of a sweeping feeling of powerlessness.

But the sustainability of football depends on the fans feeling the sense of control that ordinary working people feel they aren’t given during the week. It depends on respecting sacred institutions by not subordinating them, and the fans, to capital. If the government can’t follow through on its promise to ensure workers are represented on the boards of companies, at the very least it should enact Labour’s policy and legislate so fans are represented on  football club baords. This is an absolute necessity if the sport is to fulfil its historic purpose, and for clubs to retain their souls.

Linkedin
RELATED ARTICLES
OTHER ARTICLES
Whether it's partygate, the climate crisis or the spiralling cost of living, the fightback begins on the picket lines writes Tommy Vickerstaff
The past five years have seen a staggering increase in foodbank usage across the UK. Now, staff fear things are set to get much worse.
Finland-born photographer Sirkka-Liisa Konttinen looks back on her decades-long documentation of life in Northern England.
50 years since its inception, and the campaign calling for recognition that capitalism depends on domestic labour is as pertinent as ever.
Proposals to introduce a minimum GCSE threshold for student loans will disproportionately affect those from marginalised backgrounds.
A new edition of a seminal book brings together iconic images of the band onstage in their full glory and backstage in moments of unguarded camaraderie.