News & Politics / Opinion / Pride is a protest, and don’t let anyone tell you otherwise 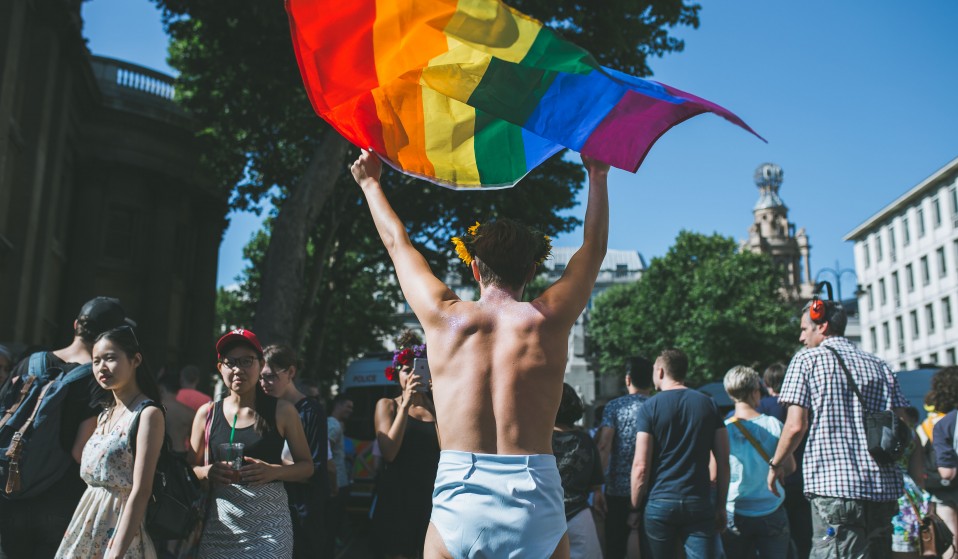 After the arrest of five protesters in Glasgow Pride, it is important to remember that the fight for LGBTQ rights must not be commodified and repackaged.

After the arrest of five protesters in Glasgow Pride this weekend, it is important to remember that the fight for LGBTQ rights must not be commodified and repackaged for the sake of mainstream comfort.

Last Saturday, three Free Pride activists and two members of AntiFa were arrested during the Glasgow Pride parade. The reason? Protesting the strong presence of police at pride, who, at this particular event, were there not only taking part in the walk while uniformed, but also leading the march.

The three protesters, all of whom are part of the NUS, attempted to unfold a banner in front of officers before the march set off, in a bid to put LGBTQ activism back at the forefront of the parade. They were quickly tackled to the ground and detained, later to be charged with breaching of the peace.

The other two arrests happened in a separate part of the parade, as the police took issue with a member of AntiFa who held a sign saying “These faggots fight fascists” – a  possible reference to the slogan of anti-ISIS LGBTQ+ group The Queer Insurrection and Liberation Army, who have been fighting in Raqqa to protect LGBTQ individuals and end the authoritarian regime that continues to operate in the area. They are now facing hate speech charges due to the usage of the word ‘Faggots’ on the sign.

Two arrested at #GlasgowPride because of a placard in #IWW bloc reading "These Faggots Fight Fascists". pic.twitter.com/S66mOQYcB2

Now – no one is saying all LGBTQ people have to feel comfortable with reclaiming slurs. But calling a statement like that ‘hate speech’ seems like a pretty bold stretch, and shows a basic lack of understanding over the appropriate use of language by LGBTQ people towards themselves.

It’s not the first time that LGBTQ protestors who delve into issues such as antifascism and police violence have been arrested during this year’s Pride celebrations. Four people were detained and maced while protesting the death of yet another black man at the hands of the police in Columbus, US back in June.

Still, every single year as Pride time comes around, the think pieces pour in. They remind readers that Pride started as a protest, and that it should not become a marketing opportunity. Yet every year, the parade becomes more corporate (case in point, this year’s London pride had no bisexual block, but it sure did have a Bank of America one).

At the risk of sounding repetitive, I will say it again: Pride began as a protest. It started specifically against targeted police violence. It was started by, amongst others, a black, trans woman called Marsha P. Johnson. Black and trans people still unjustly die and face violence by the hands of the police every day, all over the world. It is paramount that we do not forget this.

Considering its origins, the idea that it’s even possible to remove politics from pride is absolutely ridiculous. The Pride parade may be a celebration of our lives, but it is not there for entertainment purposes. It’s meant to challenge the status quo that still, to this day, consistently others LGBTQ people.

i know you're all bored of the photos but i look so good? they try so hard to scare us but i was just loving myself so much pic.twitter.com/hEqTWMFsnf

In many places – for example, Uganda, whose march was impeded of going forward yesterday after threats of arrest were made against the organisers – Pride celebrations are still something worth fighting for. You don’t even have to look that far – the DUP, with its staunch views against same-sex marriage, is now propping up the UK government.

There have been many supportive responses to the groups’ actions, including a statement by the NUS and a tweet by Chelsea Manning. But the amount of online comments and responses that justify the use of force against the activists by saying that the LGBTQ community already have “enough rights” is absolutely staggering.

The only reason the LGBTQ community got anything was through protest. Continuous protest. Refusal to remain quiet. Any LGBTQ person alive since the 1960s will remind you that nothing was given to us without a fight. Sodomy laws were not lifted because our predecessors asked nicely and were compliant.

Yes, things are much better than they were before (in England and the United States, at least), but how is it possible to believe the fight to be even slightly over when trans people in the UK still have to jump through so many hoops to access adequate healthcare? When LGBTQ people are still being killed by the hundreds all over the world because of their identities? When small acts of violence and bullying are still an everyday reality?

Intersectionality is a fundamental necessity. Bringing Black Lives Matter, as well as discussions of xenophobia, police violence and homophobia (which, as well as a historical fact, is recognised by those within the force) to Pride celebrations should not be seen as anything other than an absolute given. The LGBTQ community includes many, and during times of hardship, we must all stand together – if not for ourselves, for others who are still enduring abuse.

The organisers of Glasgow Pride have sided with the police in their actions against the protesters, declaring themselves “saddened that this shameful attempt to sabotage the parade has come from within the LGBTI community.”

Considering the historical role the police have played in the oppression of LGBTQ people over the years, it seems strange that these activists have been called “saboteurs” for daring to affirm that the parade should not be represented by a uniform-clad institution. The police have not only caused a great deal of pain to the community, but they’ve also never wholly apologised for their perpetuation of state-sanctioned prejudice. At times like these there are bigger issues at stake. The past should never be ignored for the sake of comfort.

Linkedin
RELATED ARTICLES
OTHER ARTICLES
Photographer Becky Tyrell went down to the fading banger and stock raceway to meet a community desperate to keep it alive.
Theo McInnes’s photos of the annual event provide an intriguing snapshot of contemporary Britain.
Since 2007, Gideon Mendel has made 20 trips to document floods in 13 countries. The result is an alarming record of what has already been lost to the climate emergency.
A new film from Berghaus traces the story of Adam Raja, who left behind a turbulent upbringing to discover the healing power of climbing.
Activists and campaigners are fighting back against new laws that would seriously undermine the ability to take industrial action, calling it an attack on fundamental workers' rights.
After blocking the Scottish government’s gender recognition reform bill, Westminster is now devising further changes to the law to make it harder for trans people to self-identify.