News & Politics / Opinion / ‘Death here and promises of more’: On police brutality and the fight we must win 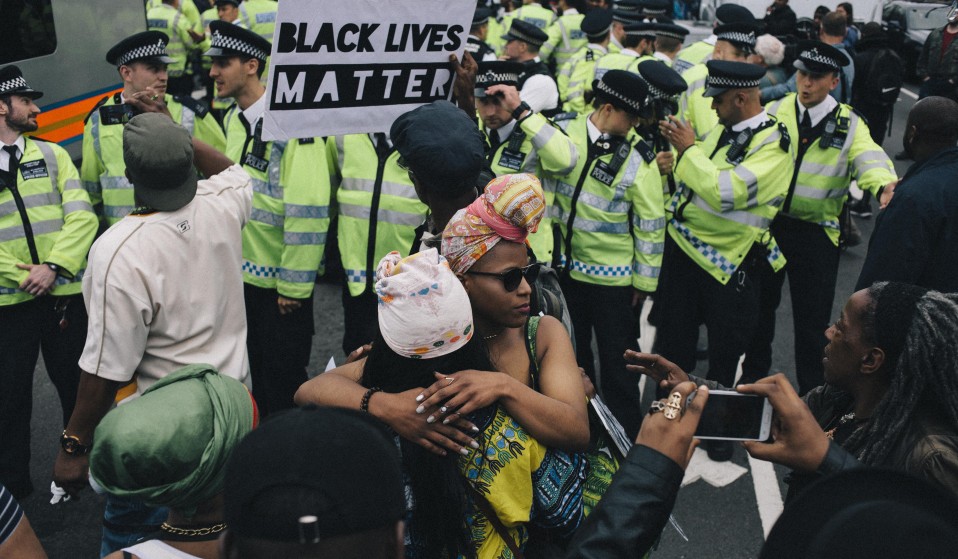 This weekend 20-year-old Rashan Charles was killed by police in Hackney. It's hard to swallow the idea that Britain is a 'post-racial' utopia when black bodies meet their end on our streets.

This weekend 20-year-old Rashan Charles was killed by police in Hackney. It's hard to swallow the idea that Britain is a 'post-racial' utopia when black bodies meet their end on our streets.

“There is death here, and there are promises of more”

Every time a video emerges of another black person being murdered by the police on camera I watch the video studiously, against all common sense and against all instinct for the preservation of my mind and body. It’s not in search of explanation or mitigation or to satisfy any voyeuristic desire, but because I want to remember these casualties in the war on the black body. It never leaves you after watching that our safety and continued aliveness teeters on the knife’s edge, on minutiae— the flicker of a hand gesture at the wrong moment, instructions ignored or followed, mistaken identity, the pursuit of livelihood. Any one of these could be the reason we do not come home one day.

Two and a half years ago 12-year-old Tamir Rice was shot. Two and half years later the landscape is as bleak as ever. The police evade accountability,  justice evades us, and most of all the question of how to keep young black men and women alive still evades an answer in the collective consciousness.

Frequent arguments on on my Twitter timeline— wars waged across all sides of the diaspora remind me how the discourse around police brutality is dominated by African-American narratives. Activists and bigots alike paint Europe, and in particular our own British context as a post-racial wonderland, where police brutality is a rarity. But the truth is our communities are being ripped apart by this state violence just the same. I want to shake them, and tell them that if utopia came it never told anyone that looked like me.

Two days ago, a young black man died after contact with the police. His name was Rashan Charles, he was twenty and he appeared to have been put in a headlock by a police officer who wrestled him to the floor after a chase. I have since then marveled at just how similar meanings ‘choked to death’ and ‘taken ill’ might as well have in official police statements. Before him Edson Da Costa also ‘took ill’ a few weeks ago while in police custody. Before him Sheku Bayoh, and before him Sarah Reed, and before her countless others whose names we shall never know. There have been no arrests, no indictments, and no one held culpable. Rashan leaves behind a young daughter.

Rashan Charles – Murdered in Dalston yesterday by the Metropolitan Police.

How far can a community stretch before its body politic is irreparable? Before trust and faith in this great joint social enterprise of nationhood is so diminished by the blood of their skinfolk flooding their streets? Who watches the watchmen when even the everyman defends his right to shoot us over our still warm bodies?

Rashan’s story, and indeed all of these stories have failed to dominate news cycles the way a single Boris Johnson gaffe would. The media’s willful failure to hold to account the authorities responsible for these deaths and indeed their failure to shed any light on the circumstances of these killings is tantamount to collusion with a public that would rather reimagine Britain as a “post-racial” dreamland than a nation almost backwards in its absence of racial equality.

A young indigenous Australian teenager, Elijah Doughty, was run over during a vigilante chase in August 2016. Scrolling through an article about the not-guilty verdict returned on charges of Manslaughter against his killer, a woman branded the young victim, Elijah as ‘a kid who did a naughty thing’ and his murderer as an ‘adult who was sick of many naughty things happening.’

Such is the contemporary contempt for black and brown children, we can see the denial of their youth and personhood visible in these arguments about the deservedness of these young victims. But there should be no arguments about deservedness. We should not lose focus arguing against straw-men, and arguments about black-on-black crime—the direct result of government policy that has stagnated the inner city, crippled low-income families, withdrawn opportunity from them because of the colour of their skin. No. These were real people— complex people containing multitudes— and they were loved and cherished. In fact, even if they were not loved or cherished, even if they were the most dishonorable men and women and children, they should still be here, standing trial if need be, being rehabilitated. Their execution should not have been a foregone conclusion.

We have witnessed the death of community policing; repeated failures to de-escalate; the steady militarisation of our police forces, and all the interconnectedness of a callous judiciary system and brutal police force. These, the violent arms of a state that would have us dead if not complicit, and a media that fails to hold them to account while our bodies pile up. The resurgence of the kind of wicked, stomach turning respectability politics, that claims the dead are dead because they couldn’t behave. The increased use of dehumanising spit hoods reminiscent of medieval torture devices— a first round of humiliation, increasingly rolled out across trials in London. If this state sanctioned thuggery is the status quo then scrutiny and resistance must remain the words of the hour, and they must be screamed from every pulpit and every rooftop until a change comes.

Continued life for young black people must not feel like a stay of execution. These conversations are undeniably urgent. Consistent and unwavering pressure, and unrelenting press coverage is necessary to force the hand of a state that fails to prioritise racial justice, and a public consciousness convinced of its own innocence from racial bias.

Since 1990, there have been over 1,500 deaths during, or in the immediate aftermath of police contact, a disproportionate number of those deaths have been BAME. 1500 lives lost and counting. There are of course those praying and fighting for recourse, devoting their time, energy and resources to uncovering the truth about this brutality. They are uncovering all the many people with histories and loved ones and lovers, who suddenly became ‘unwell’ in police custody; the bodies that form the centre piece of the longest burning funeral pyre in human history. We have been kindling too long.Thankfully Siana Bangura and Troy James Aidoo are already doing the necessary and vital work of exhuming these stories; of investigating and revealing the violent truths that we and these bodies have known and attempting to explore police brutality, and all its racialised dimensions in our own uniquely British context.

As hundreds marched through Hackney yesterday evening, it would feel empowering to look forward both here and on the streets in some hopeful, cliched way – by calling for us to remember them not as they died, but as they lived. But how they died is just as important as how they lived; in remorseless hands, on the wrong side of a police bullet, in the back of police cars, in cells— their deaths sometimes filmed, oft commodified and retweeted until there is little dignity left.

There is no recourse here, no victory in this martyrdom, only death, and promises of more to come. We must scream, and march, and watch vigilantly, and turn over tables until there is justice or something resembling it for Rashan, and Sheku, and Edson, and Sarah, and Mzee Mohammed, and all those who have fallen at the hands of the police in this green and pleasant land.

We must scream until it stops. Until sirens do not mark hearses, and bodies are tried not by street-corners or on shop floors but in courts of law. We must scream till these communities can begin to heal, and that may well mean a great deal of screaming for a long time to come.

Linkedin
RELATED ARTICLES
OTHER ARTICLES
After rewriting the indie rulebook with her devastating songs about romantic longing, the singer-songwriter is now imagining a future in which the artist is no longer a product.
With the virus now a global health emergency, we must take steps to fight misinformation and demand a swift UK-wide vaccine roll out, writes Phil Samba.
Steel City is often overlooked when it comes to the country's cultural radar despite its role in shaping electronic music.
One year on from the fall of Afghanistan to the Taliban, Tiara Ataii speaks to those who have been forced to make the treacherous journey to Europe for safety, and the barriers and horrors they have faced.
With the UK now set to run out of vaccines, people working in the sex industry – particularly outside of major cities – have been left especially vulnerable, reports Brit Dawson.
A new series of photos by Johny Pitts shines a light on communities and subcultures that have all too often been overlooked.