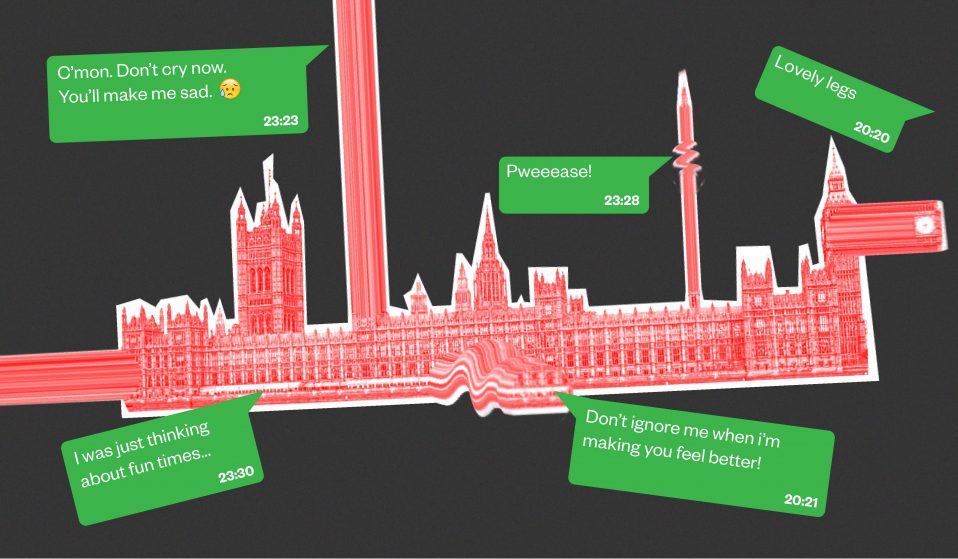 For those who work in Westminster every day, the sexual harassment allegations against Conservative MP Rob Roberts come as no surprise.

For those who work in Westminster every day, the sexual harassment allegations against Conservative MP Rob Roberts come as no surprise.

This week, Conservative MP Rob Roberts was accused of sending inappropriate messages to his intern. The alleged texts, which have been circulating online, show the MP doggedly asking for “no strings” “fun times” with his 21-year-old employee, even after she complains about her mental health struggles.

When I saw the messages, I was filled with a familiar sense of dread. Sexual harassment isn’t new to current or former Westminster staffers: it is well and truly entrenched within the culture of British politics.

I started working in Westminster when I was 21, and the sexism was palpable as soon as I stepped through the doors. It’s as obvious as being groped in the queue for your lunch, or being ogled in the lift by MPs old enough to be your grandparents. Whispers are shared amongst female colleagues about MPs and their staff who have reputations for sexual harassment or assault. It isn’t because these people have convictions or are under investigation, they’re just notorious. Some staffers have first-hand stories about incidents they’ve had with over-familiar bosses, or predatory staffers using their power and status to prey on impressionable young staffers who are desperate to make connections.

Conservative MP @RobDelyn invited an intern to ‘fool around with him’ and suggested ‘fun times, no strings attached’https://t.co/ZA9vfMLLnI pic.twitter.com/Vm2QiJyKYr

This abuse is an open secret. One particularly damning report, published last year, found that parliamentary staffers faced an “unacceptable risk” of being mistreated by MPs, with many reporting unwanted and forceful “sexual advances”, and “attempts of kissing.”

The investigation, led by QC Gemma White, found that a number of complaints “involved some form of unwanted touching: for example breasts being grabbed, buttocks being slapped, thighs being stroked and crotches being pressed/rubbed against bodies.” There were also reports of MPs shouting, swearing, and throwing office furniture at staff during bouts of “uncontrollable rage”.

For years, Parliament staffers who raised concerns of this kind of harassment had no independent HR or complaints body to turn to. And if they went public with allegations, they would often realise the only career they’d be damaging was their own. For example, in 2018, a sexual harassment complaint against Lord Lester was debated in the House of Lords, only to be overturned by the Lord’s peers. This kind of dismissal is not uncommon in Westminster, and serves as a constant reminder to young women that the institution will fail you. Powerful figures in Westminster will go to the ends of the earth to protect each other and continue to legitimise the most horrendous abuse of some of the most vulnerable people.

Parliament is a cesspit for this. When I interned in 2011 I witnessed a Tory MP tell a young female aide who made a comment about how soft the sofa we were sitting on was that he had "something hard she could sit on." He was notorious for this. Surprise surprise, he's still an MP https://t.co/yKrAdiJdjA

There are, thankfully, some signs of progress. Two years ago, Dame Laura Cox headed up an inquiry into bullying, harassment and sexual harassment in Parliament, which found that abuse was often “tolerated or covered up”. One of her recommendations was that complaints of such behaviour must be dealt with entirely independently of MPs. This independent panel, agreed in the house a few months ago, does now at least provide a robust procedure to deal with sexual harassment. But it will only work if MPs and political parties fully engage with the process.

What happens with the Rob Roberts case remains to be seen. A spokeswoman for the Parliamentary Commissioner for Standards said that, following the rules of the new independent process, they couldn’t confirm that he was now under investigation. And so far, there has been no suspension, or statement from the government that the staffer in question was receiving the necessary support for such an incident. But I am hopeful that this will be a wake up call, to MPs and staffers alike, that there is an endemic culture of abuse in Westminster that must be rooted out.

Linkedin
RELATED ARTICLES
OTHER ARTICLES
The demonstration took place this week over plans to slash £50m from arts bodies in London.
Layna, Maysa and Amaya are three siblings looking to disrupt narratives around the sport. In doing so, they’re hoping to inspire a new generation of skateboarders.
Jack Lueders-Booth reflects on capturing the community that lived and worked along the city’s busiest railway route during the 1980s.
Recent research is highlighting the drug’s enormous potential for treating substance abuse.
Photographer Jeffrey Silverthorne always treated his subjects – often those living on the margins of society – with empathy and respect.
A new exhibition is marking the photographer’s 100th birthday with a look back at his extraordinary career.