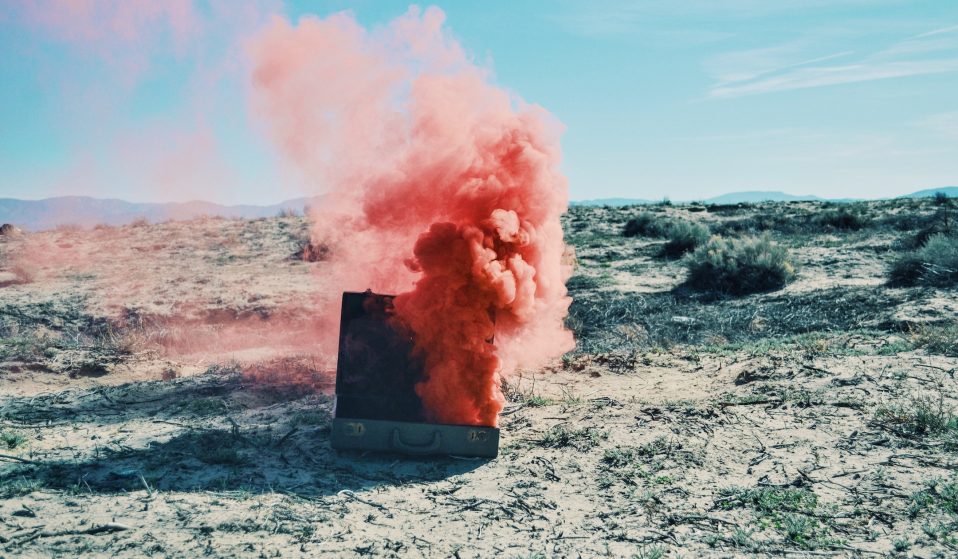 As the pandemic sees people spending more time on social media, parents-to-be are going to even greater lengths to announce the sex of their child. But could recent tragedies ever put an end to this lethal trend?

Last month, residents living in a quiet, small town in New Hampshire were left fearing for their safety after an earthquake occurred so loud, it could be heard across state lines. This fear soon turned to anger, when it was revealed that the earthquake was entirely the result of man-made causes – specifically, a gender reveal party.

The family responsible for the earthquake had used industrial quantities of explosives to announce their child’s gender to the world. “It knocked pictures off our walls,” a local resident was reported as saying. “I’m all up for silliness and whatnot, but that was extreme.”

While such an event might seem out of the ordinary, gender reveal parties regularly make headlines. Americans have used everything from planes to pipe bombs, and even an alligator, in pursuit of the most impressive gender reveal stunt for their future child. In at least two incidents already this year, they’ve ended up killing someone.

Gender, the socially constructed differences between women, men, and nonbinary people, is often ascribed to children at birth based on their sex presentation. Sometimes, this aligns with their identity, as they grow and develop their own outlook, whereas other times, it does not. Carly Gieseler, an assistant professor at The City University of New York who studies gender reveal parties, says that these parties can cause damage in two ways. “We have to think about the ramifications not only in terms of  the safety of those involved,” she explains, “but also from the idea that you are largely excluding a population who do not fit into that pink-and-blue binary.”

Google queries about “gender reveal parties” have grown steadily since 2010, with Gieseler noting that the industry around them has boomed in that time, now taking up whole sections of party stores with various pink and blue items. This coincides with the creation of Instagram in 2010, and with it a generation that has come of age with the pressure of posting novel and attention-grabbing photos or videos as a way of courting the likes and retweets of their friends, family, and followers.

According to Gieseler, these events are, at their heart, “about community”. Gender reveals might be likened in this way to Quinceañeras in Latine culture, or to circumcision in Turkish culture. But they have become increasingly commodified and, for some reason, increasingly dangerous, in a trend that Gieseler describes as “particularly strange”.

Gieseler notes that during lockdown, parents-to-be have been going to even more extreme – and potentially dangerous – lengths to announce the sex of their child. “It has been amplified because people are increasingly taking to social media as their means to share during the pandemic,” she explains.

In February earlier this year, Christopher Pekny – a 28-year-old father-to-be – died, while his brother was injured, when their attempt to create a trial version of their gender reveal pipe bomb went horribly wrong. Pekny, who was from New York, was assembling a device that police say consisted of some kind of pipe when it exploded without warning in what his brother called “the freakiest of freak accidents”.

Sadly, these events aren’t total freak accidents. In 2019, an Iowa grandmother-to-be died at a gender reveal party when another pipe bomb caused shrapnel to fly into the air fast enough to end her life and then travel 144 yards further, ending up in a nearby field. In this case, local police were able to investigate the device which they say consisted of a metal tube welded to a base. “Tape was then wrapped over the top of the metal tubing, inadvertently creating a pipe bomb,” the police statement said. A month later, two people died in a plane that was streaming pink smoke to reveal the sex of a baby in Mexico.

Even when gender reveals don’t cost lives, they can have serious consequences on the people involved. In April 2017, off-duty border control agent Dennis Dickey set up a target full of the explosive tannerite in the arid shrubland south of Tucson. Dickey had made the target with the words “boy” and “girl” written on it as part of a gender reveal stunt. He took aim and hit it the first time while someone else filmed. The target blew up in a cloud of blue smoke, and then the shrubland around the explosion burst into flames.

Just like that, Dickey had started the Sawmill Fire, which went on to burn 47,000 acres and cost $8.2 million to extinguish. After pleading guilty, Dickey was forced to pay $100,000 upfront and made to pay an additional $120,000 more in $500 monthly instalments to cover some of the costs. What should have been a moment of celebration ended up being, as Dickey described it, “probably one of the worst days of my life”.

Not all the victims of these parties are those who chose to attend. In September 2020, a couple in Yucaipa, about 70 miles east of Los Angeles, set off a smoke generating device to reveal the sex of their child. The fire, in addition to burning 22,744 acres, also cost the life of one firefighter, Charles Morton, who had spent the previous 14 years risking his life to protect people living in fire-prone Southern California.

A California fire sparked by a gender reveal party has grown to nearly 10,000 acres https://t.co/p6ZUW9ym9G pic.twitter.com/nBJalZGie9

Even Jenna Karvunidis, the woman who “invented” the gender reveal trend, believes that things have gone too far. When Karvundis and her partner cut into a cake revealing a pink interior in 2008, they never thought that it would lead to them being frequently asked to comment on deaths from improvised explosive devices and huge wildfires. “Stop having these stupid parties,” she wrote on her Facebook page. “For the love of God, stop burning things down to tell everyone about your kid’s penis. No one cares but you.”

Karvunidis, whose first child is now gender-nonconforming, elected to skip parties for her second and third children after seeing the trend she inadvertently created take-off. She also believes that there is no way to know a child’s gender before the child is old enough to say themselves.

Even when gender reveal parties don’t cost the lives of attendees, innocent first responders, act as a Covid super spreader event, or damage thousands of acres of irreplaceable forest, placing so much emphasis on gender norms could be where the deep harm lies. According to one study, transgender people who experience family rejection based on their gender identities are three times more likely to attempt suicide.

Fortunately, Gieseler says she has seen some more positive developments in the trend. Last year, a family in Ohio held a gender reveal for their non-binary teen, opening a box to reveal balloons in a range of colours, followed by their 17-year-old non-binary trans masculine child, Grey, who popped out waving a pride flag.

“We wanted to announce that we got it wrong 17 years ago when we told the world we were having a little girl,” Grey’s mother wrote in a viral Facebook post. “We’d like to introduce you to our SON, Grey.” Grey’s ‘reveal’ signals a more hopeful future for events that explode the gender binary – without the need for an explosive target.

Linkedin
RELATED ARTICLES
OTHER ARTICLES
With abuse of call-centre staff on the rise, many are now speaking out about the hostility they’ve faced.
Photographer Yan Morvan revisits a radical moment in history, which saw the emergence of a fiercely-rebellious spirit among the UK‘s youth.
While police claim that body cams increase accountability, the proliferation of the tech raises questions over who it really serves.
Ahead of the policing bill reaching its final stages in the Lords, protestors came together to rally against the legislation.
Hundreds gathered together to protest the policing bill by making as much of a racket as possible.
The photographer reflects on building trust with his subjects and using the street as his studio.