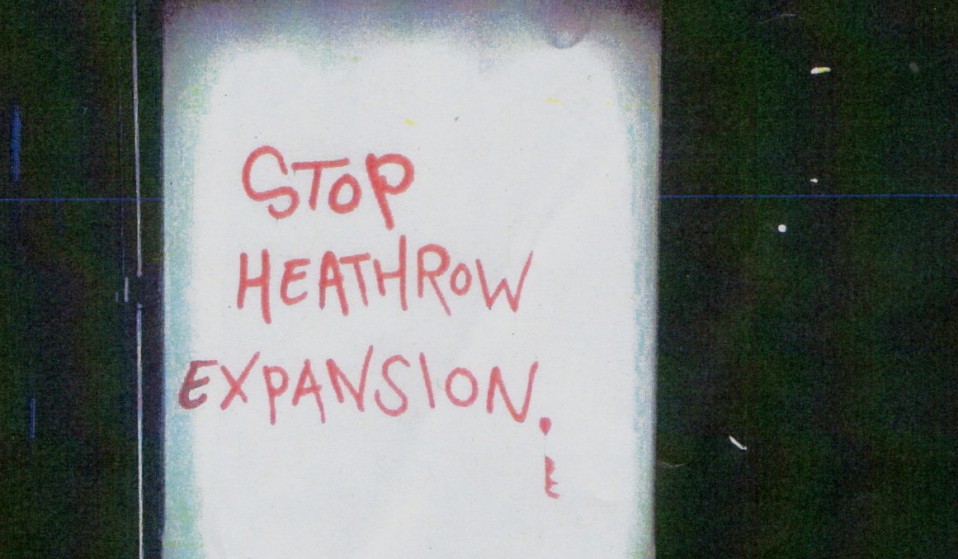 The vote for a third runway at Heathrow puts both the planet and the progressive left at risk, writes Ellie Mae O'Hagan. You can't build socialism on a dead planet.

The vote for a third runway at Heathrow puts both the planet and the progressive left at risk, writes Ellie Mae O'Hagan. You can't build socialism on a dead planet.

A week ago, British parliament voted in favour of building a third runway at Heathrow airport, just outside London. Heathrow is already the second busiest airport in the world in terms of international passenger traffic; the new runway will cost £14bn.

Make no mistake, the vote was an unmitigated disaster. If the runway is built it will see Heathrow emit as much carbon as the whole of Portugal. It means that the UK will not meet the targets set out in the Paris climate agreement, which in turn will de-incentivise other countries to do the same. And, if the world fails to stay within 2C of warming, we’re looking at more extreme weather, a refugee crisis that makes the current one look like a children’s tea party, entire countries becoming uninhabitable, food shortages and an increase in global conflict. The Heathrow vote was no small event; it has the potential to impact the climate on a global scale.

The vote was also a political disaster. It has fractured the fragile trust being built between the climate movement and the labour movement in the United Kingdom. If the conversations I’ve had over the week are anything to go by, it has led to disillusionment amongst politically active people under 30 with the trade unions (some of whom lobbied in favour of the runway). This is a tragedy: unions desperately need more young members, and young people need unions.

Ultimately, the runway was pushed through by both the right and the left. So how, at a time of climate emergency, did one of the world’s most developed nations end up going backwards?

The Heathrow vote is the culmination of the failure of successive governments to prioritise climate change as an issue. Previous Labour governments have had an obsession with conceding to the free market, and the Tories who are up to their necks in the fossil fuel industry, have both got us to this place. The current government has abolished the Department of Energy and Climate Change, slashed jobs in renewable energy, and cut funding for adaptive measures like flood defences. The fact is: no mainstream political party has treated climate change with the seriousness it warrants.

The upshot of this is that there was no alternative policy to the third runway, which is ultimately why it was supported by a number of trade unions. It’s fanciful to expect a movement that has suffered the closures of coal mines, the decline of the manufacturing industry, the collapse of British steel, the blacklisting and imprisonment of its members, and a million other humiliations to oppose thousands of jobs being created and simply trust that everything will be okay. The unions can’t transition away from fossil fuels themselves, and they have no evidence that the government will do it for them. They have nowhere to go on this. They need a credible plan to transition to renewable energy that won’t leave their members behind.

Today I spoke against the expansion of Heathrow and about the human cost it would have on my local community. pic.twitter.com/WDTNzE8r45

So really it comes down to the current Labour Party. The current leadership may not have been one of the key actors to get us to this position (indeed Shadow Chancellor John McDonnell has been one of the third runway’s key opponents), but it is the only body that can end the climate verses jobs deadlock by making climate policy a priority. The Labour Party is the only progressive political party that has a shot at winning power; and crucially it is the only party that commands the trust of the unions.

There are several interventions that the Labour Party can make immediately. It can establish a Shadow Department of Energy and Climate Change, so it has a dedicated body to respond to politics from a purely climate angle. This would also highlight the fact that the department no longer exists. It could institute policies to develop publicly-owned, community-led renewable energy programmes – which would form part of its intention to build a country that works “for the many, not the few.”

Now we know that extreme weather can be directly attributed to climate change, it could start holding fossil fuel companies to account by forcing them to pay for the damage caused by wildfires, flooding and so on. And finally – and perhaps most importantly – it could develop a revolutionary and just transition policy to centre the interests of workers in the winding down of the fossil fuel industry.

It’s up to the people who voted Jeremy Corbyn as leader to pressure the Labour Party to prioritise climate policy. Labour members rejoiced when the party’s manifesto for the 2017 general election outlined policies to redress the balance of wealth and power in Britain. Now Labour needs to develop those policies through the lens of climate change. You can’t build socialism on a dead planet.

Linkedin
RELATED ARTICLES
OTHER ARTICLES
In Glasgow, life expectancy is reduced by 15 per cent. In a new project, photographer Kirsty Mackay reflects on the lives cut short.
The Philadelphia local has made a name for himself capturing the hardcore scene – and over more recent years, he’s been ramping up his coverage of the fight for social justice.
From Brooklyn gang members, to Welsh miners and the residents of East Harlem, Bruce Davidson used his camera to shine a light on the most marginalised.
While the popular news aggregation service has been kicked off Twitter, its demise does not spell the end of digestible misinformation.
In 1984, Martin Shakeshaft set out to document the miner’s strike as it really happened, using his photography as a tool for activism.
Riding from street to street on his trusty bike, Scottish photographer Sandy Carson documents his adopted home at a unique point in its history.