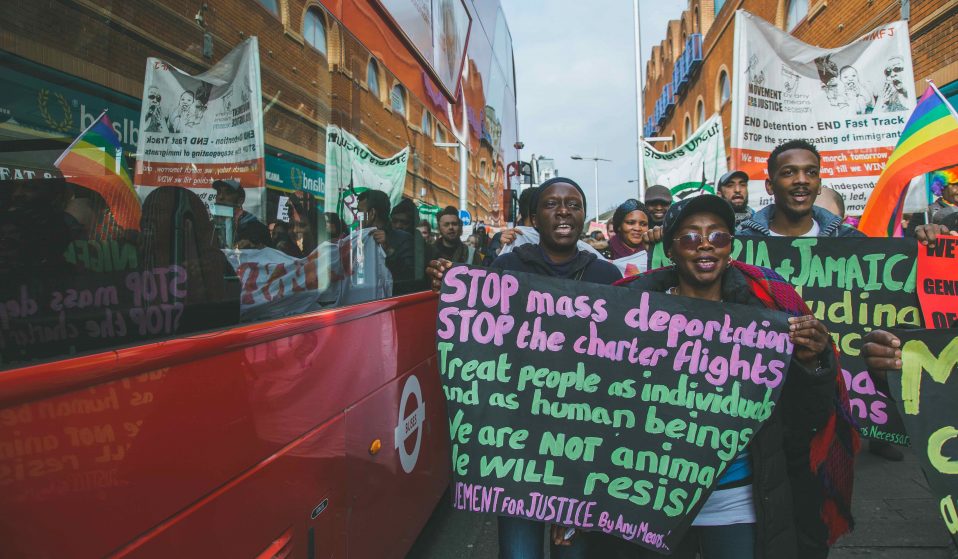 Anyone associated with the denigration, torture and deaths of LGBTQ+ people should not be welcome at Pride – regardless of how they identify.

Anyone associated with the denigration, torture and deaths of LGBTQ+ people should not be welcome at Pride – regardless of how they identify.

An ad hack is, in some ways, quite an easy form of direct action. The premise is simple: you create a poster or billboard with a design focusing on a certain issue, and then replace existing commercial adverts with it. The result is that commuters, who are usually bombarded with adverts for luxury flats or food delivery services, get confronted with the injustices that are being executed in their name.

This morning, activists from Lesbians and Gays Support the Migrants (LGSM) and The Outside Project “hacked” bus stops along the route for tomorrow’s Pride parade in London, putting up posters asking: “Who is welcome at Pride?”.

The ads challenge how institutions such as the Home Office and the MET police, as well as corporations like Barclays, are able to march on Pride, but marginalised groups are left watching on the sidelines because they are unable to afford it.

“You have to ask who Pride in London is really for,” said LGSM’s Sam Bjorn in a statement. “50 years since Stonewall, Pride should be standing up for the people in our community facing the brunt of oppression, not promoting the very companies and institutions that attack us.”

This morning we joined forces with @LGBTIQoutside and hacked adverts at bus stop along the route of @PrideinLondon to highlight the people excluded from the march by excessive costs. #PrideIsAProtest #NoPrideInDeportations pic.twitter.com/ZEoPx2VChP

Bjorn’s thoughts were echoed by Harry Gay, a support worker at The Outside Project: “Aside from the fact that we, a small grassroots homelessness project, have to pay to be a part of Pride in London, they repeatedly ignore our requests for it to be more accessible for our guests. We are fighting for our voices to be heard in solidarity with other marginalised groups who are equally being pushed to the back in what corporate pride has become.”

The commercialisation of Pride is well documented and has been vehemently argued against by activists for years. But these posters – which will be seen by the hundreds of thousands of revellers tomorrow – pose a new question. Who exactly are we welcoming at Pride? When bloc after bloc sails past in the parade, emblazoned with the names of companies and institutions more commonly found embedded in headlines about injustice and homophobia, one starts to wonder what – and specifically who – it’s all for?

Yesterday, after criticism online, UK Black Pride were forced to pull a stall manned by the Home Office, calling the department’s inclusion in the event as an “error in judgement.” The Home Office has been the arbiter of the Tory Government’s Hostile Environment policy, which has been consistently criticised for its callousness and disregard for human rights. Last year it was revealed that the Home Office refused 78 per cent of asylum in LGBTQ applications, and the department has been heavily criticised for attempting to deport Kenneth Macharia – a gay Kenyan national – to Kenya despite homosexuality being punishable by 21 years in prison.

While the removal of the Home Office from UK Black Pride is positive, their initial inclusion – on the basis that the stall would be staffed by LGBTQ+ Home Office staff – remains deeply concerning. Regardless of their sexuality, it is from within the home office that those who enact the hostile environment can be found. That same body of staff who have been exposed to or engaged in a culture of shaming anyone who approves asylum claims. Those who send LGBT people to countries where they face violence, torture, imprisonment and death by virtue of their sexual or gender identity.

But it seems like the errors in judgement don’t stop there. On Saturday, at Pride in London, in amongst the giant corporate floats, there will be staff marching from Sodexo and Serco.

Sodexo is a multinational company which has been involved in controversy in the UK for their running of privatised prisons. A panorama investigation of the Sodexo-run Northumberland prison painted a picture of an institution in “chaos”, with “widespread drug use, and a lack of control”. Sodexo has also recently been criticised for the illegal stripping of prisoners, including a trans prisoner.

Serco is a private security company who have run the Yarls Wood Detention Centre in Bedfordshire since 2007. One of the most well known in the country, the centre has been plagued by accusations of sexual, physical and emotional abuse towards detainees by Serco guards. In 2014, then Home Secretary Theresa May refused access to the centre UN Special Rapporteur on Violence against Women who had hoped to investigate claims and conditions for the 400 women indefinitely detained there – many of them LGBTQ.

The inclusion of these companies in the London Pride parade, and the intended inclusion of the Home Office at UK Black Pride, sends a very clear message about priorities. It states that the LGBTQ+ community do not stand with, nor value the plight of those most vulnerable or at risk within it. It spells out a commitment to pinkwashing; to forgetting and forgiving the horrendous crimes and injustices perpetrated by these institutions and companies, while those who have been targeted are shut out.

This Pride, and every pride after, it is imperative on all of us to fight back. To say loud and clear that those who enact violence against our community, those who are complicit in the denigration, oppression, torture and deaths of LGBTQ+ people here and across the world have no place at pride – regardless of how they identify. At tomorrow’s parade, an unofficial bloc has been called by Lesbians and Gays Support the Migrants, The Outside Project, All African Rainbow Family and others. Instead of marching in the parade with perpetrators of the kind of homophobia we are fighting, I’ll be there – at the back – standing shoulder to shoulder with those forgotten by the pride machine, adding my voice and my energy where it’s needed most. I hope to see you there.

Linkedin
RELATED ARTICLES
OTHER ARTICLES
Yesterday thousands gathered outside Buckingham Palace after news of the Queen’s death broke.
A group of young Palestinians have found temporary freedom in the act of parkour, reimagining wreckage and ruins as a series of high-octane playgrounds.
Ahead of the release of their first collaborative album, the producer and rapper talk psychedelics and the state of UK hip hop.
In his 2008 series, the photographer pictured himself as Angela Davis, Martin Luther King Jr., Malcolm X, and other prominent figures.
The idea that a younger generation is abandoning work has become a popular narrative online, but it doesn’t necessarily reflect reality.
With skyrocketing rents, packed out viewings, bidding wars and more, renting in London has never been harder.