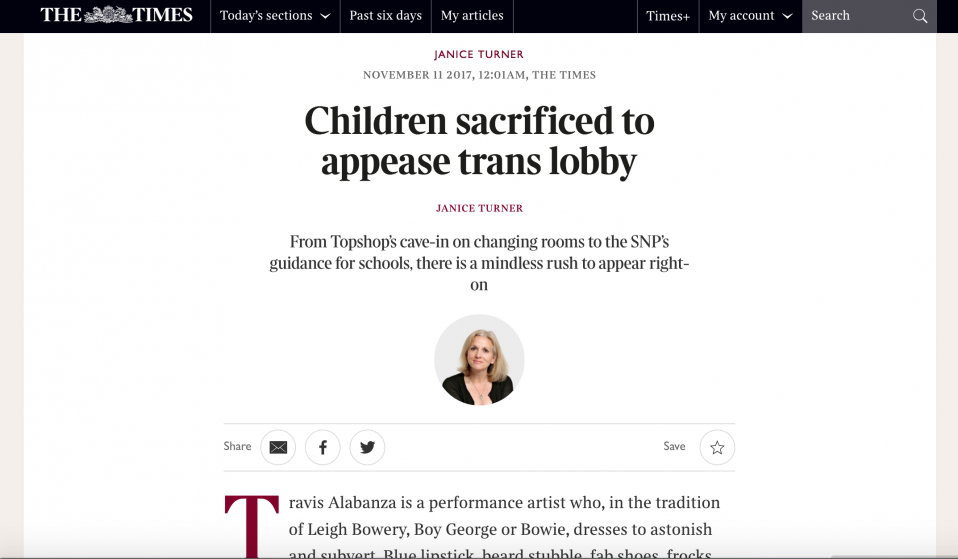 In todays Times Janice Turner penned a transphobic column, painting transgender people as predators and a threat to our children. Some journalists are obsessed with attacking the trans community, placing vulnerable people in danger while turning our media toxic, writes Dawn Foster.

In its idealised form, journalism is a courageous means by which to topple the powerful and expose injustice. In the past few decades, numerous scandals have been exposed through tireless work by investigative journalists: the exact circumstances of the clunky case for the Iraq war; the Snowden files exposing mass surveillance of US civilians; the UK parliamentary expenses scandal; the institutional racism of the Metropolitan police; the wide-ranging child abuse perpetrated by Jimmy Savile and many other entertainers; the Panama and Paradise papers detailing the endemic tax avoidance of the ultra-rich.

But the platform afforded to journalists is also capable of abuse of very vulnerable people. The treatment by The Sun of Hillsborough survivors and those who died in the disaster was deplorable and proven untrue. More recently, The Telegraph’s decision to splash a photo of student Lola Olufemi on the front page accompanying an incorrect story claiming she had spearheaded a campaign demanding white authors be removed from the Cambridge University syllabus led to a hail of racist abuse for the young woman. The Times’ coverage of a court battle around a very young child who had been fostered by a Muslim family turned out to be demonstrably false, yet whipped up hatred and fear amongst readers. And for a long period, many newspapers have carried scaremongering stories and disinformation about the lives of trans people in the UK, now centring on the treatment of children identifying as trans.

A column today by Janice Turner in The Times uses inflammatory language to suggest an epidemic of children falsely diagnosed as trans and suffering invasive and irreversible medical interventions to adhere to a ‘trend’ in modern society. Turner warns children are being ‘sacrificed’ as a ‘liberal totem’, implying the motivation is political correctness, and that the medical profession are motivated by financial interest, and that many of these children may simply be gay.

The idea that being trans is easier in society than being gay is a total canard; neither is a walk in the park, homophobic violence is still common and largely unpunished by police forces that dismiss homophobic and racist violence, and any form of sexual assault. Being trans is far harder: it’s far more acceptable to be transphobic in modern Britain, the risk of physical violence is far higher, and even the most self-avowedly polite members of society will happily question and dismiss your life choices, gender presentation and right to self define, whether in the work place or in newspaper columns.

The focus on children is a new tactic. For decades, the medical establishment was hopeless when it came to dealing with children who complained they were not the sex they had been born into, they felt their gender was not that which had been assigned. My trans friends are all clear, they were aware something was amiss from a very young age: for them, going through puberty was particularly traumatic, as their dysphoria, the psychological mismatch between their biological sex and gender identity, reached fever pitch.

To imply that people ‘choose’ to be trans to deny they are gay is offensive. Being a teenager is difficult for anyone, but while some gay teens come to terms inwardly with their own desires and how they will be accepted by people they know, it’s more complex for trans people. Not every trans person even if they remained in their biological sex is gay. Attraction to others simply isn’t part of the equation: it’s a clear mismatch between the brain and the body they’re born into. There are no circumstances under which it can be claimed identifying as trans and choosing to transition can be considered an easy option.

But most trans people are aware they are trans when they are very young. The medical options open to trans children are limited and extremely controlled. Much disinformation has flown around through newspaper columns and poor reporting about what medical interventions for trans children entail. No children are offered surgery before they are old enough to consent. Puberty blockers are sometimes offered when doctors accept the mental strain of puberty is not in the child’s interests. Once the legal age has been reached, individuals decide how they wish to precede. Blockers are reversible, so if a patient decides not to proceed with hormones and transitioning, the pituitary gland kicks in as normal and puberty continues where it left off.

If someone does decide to continue with transitioning, the process is still arduous, drawn out and takes years of medical box-ticking, therapy and consultations. Contrary to media narratives, it isn’t an easy option for anyone. What makes it more difficult is the recent press invective against both those transitioning and the parents of children identifying as trans. Very little care or even thought appears to be present for the wellbeing of those in a very tough situation that is misunderstood by society, and further muddled by press misinformation.

In the US, and now in the UK, a bizarre preoccupation with bathrooms has persisted. The tacit message underneath this fear-mongering about bathrooms and changing rooms implies a predatorial perversion amongst trans people, despite the fact trans people are far more likely to be the victims of violence and abuse.

The gatekeeping around womanhood seems to run counter to the outward messages from a certain strand of trans-opposed feminists. On the one hand, we are told gender is oppressive and should be broken down. On the other, trans women are seen as an aggressive enemy, and the ludicrous assumption that there is a vast well-funded trans lobby seeking to switch the sex of children, with parents taken in by machiavellian, financially motivated doctors is expressed without any consideration for how ludicrous that is.

Funding for trans medical care is limited in the UK, and waiting lists traumatically long for those in need. Several people I know, desperate and unhappy with their bodies and situations, have taken the dangers decision to self-medicate with prescription drugs bought through the dark web.

The trans people I know and have met simply want to get through the day without hassle, and live a normal life. Instead, they are attacked and instrumentalised in a niche and obsessive media culture war, when even coming out as trans to people they know and work with is hard enough.

That children are now being offered a very limited and cautious treatment to delay puberty and minimise possible psychological trauma has been whipped up into a Mary Whitehouse style cultural panic. What’s missing throughout is kindness and empathy. Being trans is not easy, coming out as trans is not easy, nobody undertakes this on a whim. But many more people attempt suicide and self-harm because the stress is too much for anyone to bear.

Puberty blockers are a form of harm reduction that can give trans children the space to breathe and think: some will not continue with transition, some will. But they have been given the time and space to do so rather than being faced with puberty in a body they are uneasy in. It’s all well and good for Janice Turner to wildly yell ‘think of the children’, but listening to the experiences of children entails responding to their individual experiences. To not do so is cruel and brutal.

Linkedin
RELATED ARTICLES
OTHER ARTICLES
As the role of the nuclear family is increasingly called into question, people are finding new ways to exist outside heterosexist norms.
The photographer reflects on building trust with his subjects and using the street as his studio.
Photographer Alice Mann reflects on capturing the camaraderie and discipline it takes to succeed in a highly-competitive sport.
The novelist discusses his electrifying debut, which offers a deft examination of masculinity under late capitalism.
In the UK, Hongkongers are continuing to stand in solidarity with the pro-democracy movement.
The internet furore surrounding a certain NY-based furniture designer should make us question whether condemning people in the harshest possible terms harms more than it helps.