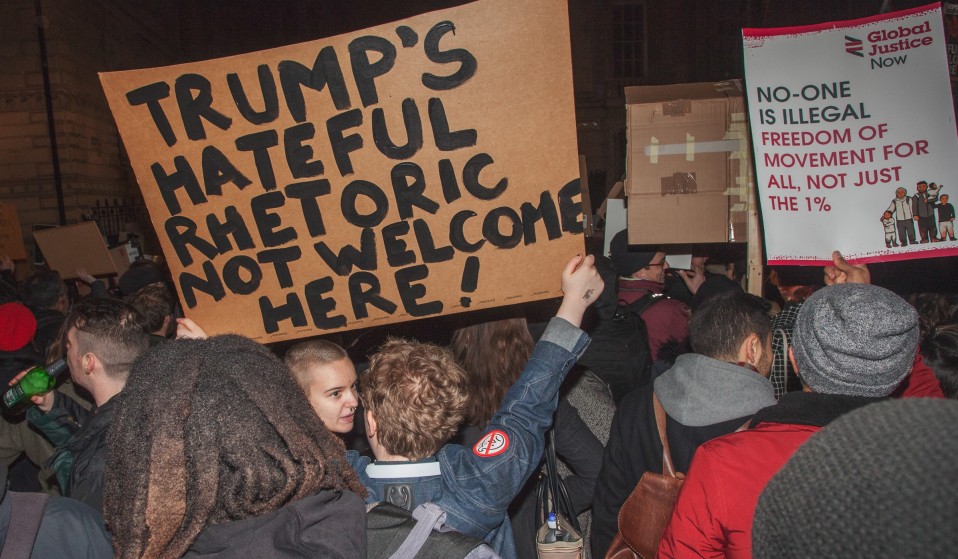 The British government plans to welcome Bigot-in-Chief Trump to Britain with open arms, but a grass-roots movement to oppose his administration in the UK is growing. Owen Jones explains why.

As the British government steamrolls ahead with plans to welcome Bigot-in-Chief Trump to Britain with open arms on a state visit, a grass-roots movement to oppose his administration in the UK is growing. Owen Jones explains why.

Imagine what future generations will think. They’ll flick through the history books – if the world hasn’t been consumed by nuclear armageddon by then, of course – and ask: at a time when a racist, sexist, war-mongering megalomaniac became the most powerful man on earth, what did people do? Did they organise, protest, confront Trump and the lethal proto-fascism that he represents? Or did they simply tut at the television set occasionally at some of Donald Trump’s more egregious policies and leave it at that?

This is a historic moment, and not in a good way. Right-wing xenophobic populism is on the rampage across the West. Its core message is? Blame foreigners and minorities for all of your problems. We’ve gone down that particular path before in Europe. And to put it bluntly, it didn’t end very well.

In Britain, the Leave side in the EU referendum ran an immigrant-bashing campaign based on outright lies, stirring up a cauldron of hatred in the process. We can’t separate this racism and xenophobia from the French National Front, the Austrian far-right, or other not-very-pleasant right-wing movements across the continent. The big daddy, of course, is Donald Trump.

Theresa May has positioned her government as Trump’s closest ally: or, rather, puppet. She refused to condemn his ban on Muslims from seven Muslim-majority countries, even when it was clear her own citizens were set to be targeted. She held hands with this bigoted authoritarian, praised him, and helped legitimise and normalise him. While other European governments – far from being raging lefties – found it within themselves to condemn what he had done, Theresa May humiliated Britain in the eyes of the world by her shameful kowtowing to his bigotry.

We looked once again like the United States’ lapdog – bringing back shameful memories of Blair’s poodle-like relationship with George W Bush. And as horrendous as Bush was – plunging the Middle East into violent chaos being among his many crimes – Trump almost makes him look like a rational pinko liberal in comparison.

Trump’s election has emboldened bigots everywhere. We can see Trumpism on the march in our back yards here in Britain. Look at the government’s contemptible reversal of the pledge to resettle unaccompanied refugee children, having taken a pitiful number so far. These children – who fled unspeakable violence and persecution – are prey for traffickers and abusers. And we are now leaving them to fend for themselves. 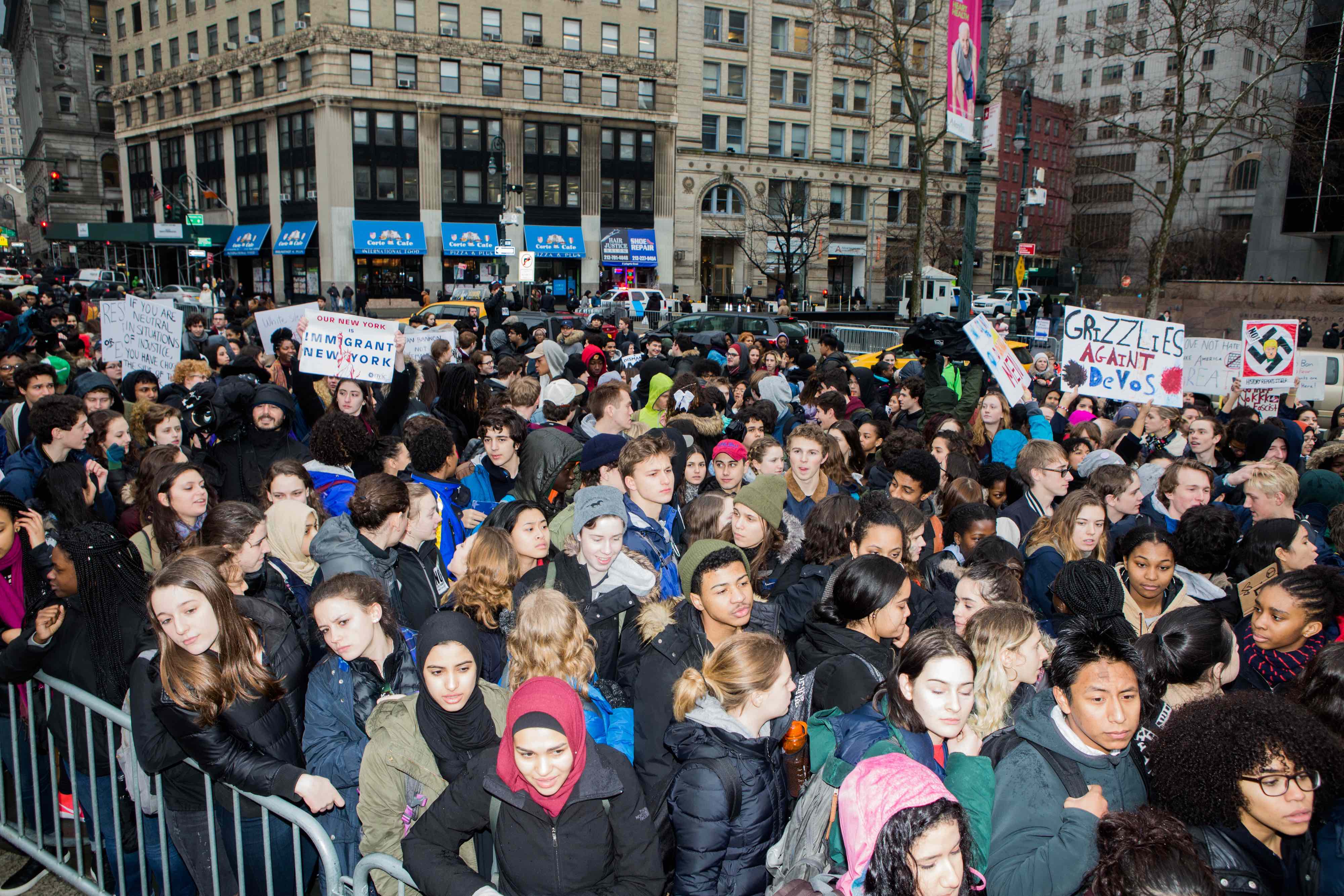 We need a movement that joins the dots: that stands in solidarity with those organising on the other side of the Atlantic; that challenges our government’s attempt to turn Britain into the puppet of Trump’s America, and their assistance in normalising his regime; and which confronts the racism and xenophobia of Trumpism, whether it’s in the United States or in Britain.

That’s why we’ve launched Stop Trump, an inclusive, welcoming non-sectarian movement. Sometimes movements are really fronts for sects with their own agendas: not this one. Last week – with just 36 hours notice – we got tens of thousands of people on the streets in dozens of towns and cities. It was the main news story of the day. Now dozens of local groups have been set up across the country. Thousands of pound have been raised. The country’s biggest public sector union, Unison, backed us. A letter committing to building for the biggest protest Britain has seen when Donald Trump arrives on his state visit was signed by a huge range of campaigners, prominent musicians and artists, MPs and trade unions.

But above all else we want you to be involved. This is a movement that will built by the dynamism and imagination and creativity of people who want to stand up for a politics of hope, rather than hatred. You don’t need to have even turned up to a protest before. Tonight (Thursday 9 February 2017) we’ll be holding an open organising meeting to plan our actions – including when Parliament debates Trump’s state visit on 20 February 2017, and when he actually arrives.

We want a campaign that is diverse, giving particular prominence to those most directly affected by the hatred of Trumpism. So come tonight, alone or with a friend, and make sure the future doesn’t belong the Donald Trumps and Nigel Farages and Marine Le Pens. History will judge what we did. Let’s make sure we have a good answer.

Sign up to the Stop Trump organising meeting on 9 February 2017.

Owen Jones is a Guardian columnist and the author of Chavs: The Demonisation of the Working Class and The Establishment – And How They Get Away With It. Follow him on Twitter.

Linkedin
RELATED ARTICLES
OTHER ARTICLES
In the latest instalment of Photographers in Conversation, the creator talks portraiture, platforms and taking inspiration from Little Simz.
To mark the premiere of his new documentary on surfing giant Gerry Lopez, the filmmaker and former pro skateboarder sits down to share his unique brand of wisdom.
A new series of photos by Johny Pitts shines a light on communities and subcultures that have all too often been overlooked.
The government’s brutal crackdown on NGOs has left victims of rape without anywhere to seek help. And now, as the country plays a key role is Russia’s war, things are only getting worse.
Photographer Bud Glick recounts documenting everyday life in the area, and what it taught him about the Chinese immigrant experience.
Steel City is often overlooked when it comes to the country's cultural radar despite its role in shaping electronic music.