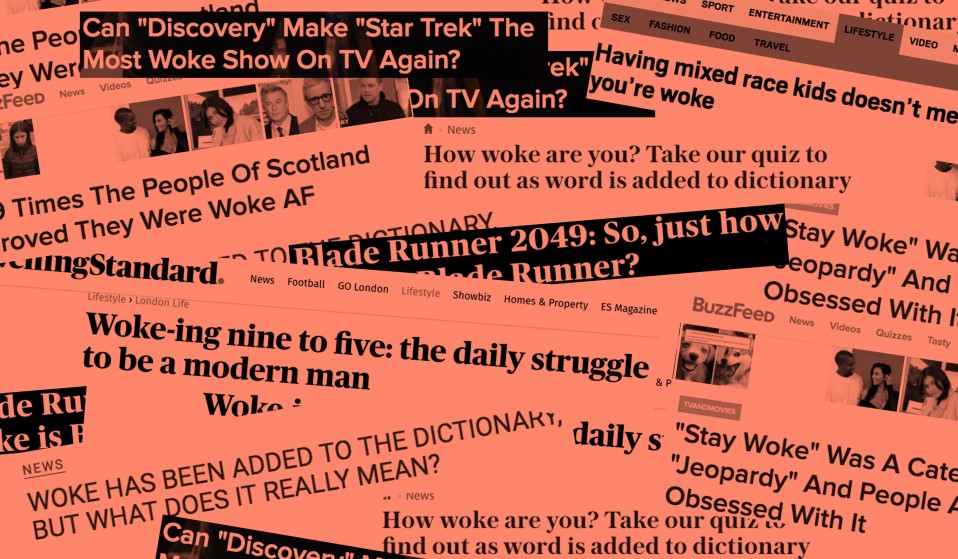 You know that co-opting black slang is not 'woke', right?

It’s suffice to say that 'Woke' has become the phrase of the moment. But like so much black slang before it this is a phrase now diluted of meaning, writes Otamere Guobadia - stolen, consumed and spat out by those who commodify and co-opt before leaving language to die. That's not 'woke'.

From billboards and Buzzfeed listicles, to your centrist dad’s broadsheet column and major brand campaigns, ‘wokeness’ is a movement that seems to have captured the imagination, or rather the lack thereof, of every corner of mainstream media.

As Holliday writes, ‘wokeness’ started life as African American slang (recorded as early as 1952 in a glossary of such phrases) for ‘well informed’ and ‘up-to-date’, and has half a century of recorded ‘pro-black political meaning’ under its belt.

Even in its most borderline silly or nearly parodical iterations, where its use posited an unhealthily conspiratorial “them”, and the ‘refused-to-be-hoodwinked-by-the-man’ us”, the word ‘woke’ carried some modicum of self-awareness. A desire for both addressee and addresser to maintain some knowledge and foresight of the ways in which institutions, governments, and corporate structures might seek to do harm to, and trample on, the rights of the little man.

At first, this idea of ‘wokeness’ was about staying aware and protected from the forces of injustice that capitalist enterprises and orwellian governments embody –  the very antithesis of what it now represents. Now, ‘wokeness’ is a lifestyle to be bought and sold, that companies make gains and centre marketing campaigns around rather than something that stands deliberately outside of the brave new world of capitalist enterprise and consumption.

The voyeurism of white wokeness when it concerns racial issues is clear. ‘Wokeness’ has effectively become a movement for people who won’t call out their racist grandma at the Christmas dinner table, but will tweet about how ‘unwoke’ she is instead. People for whom there is no fiercely protected dog in the fight other than the need to be seen to do the right thing by way of social justice.

This watered down ‘Wokeness’ represents a struggle being diluted to an aesthetic, as something to be sloganified to be worn on a sweatshirt. It’s not a movement but a hollow gesture: a safety pin on a T-shirt, a diamante poppy.

This is what the trendification of protest looks like – the reduction of the work of resistance to its most visible and most easily performed elements.

But more broadly, the word ‘woke’ is exemplary of how slang, and in particular black slang, is dislocated from its cultural labourers. I can see critics of the heavily debated doctrine of cultural appropriation already rolling their eyes, but the issue here is far more (no pun intended) black and white.

Yes, language evolves, it’s fluid. Words tumble in and out of common parlance, but the phenomenon when it comes to the slang borrowed from people of colour is much harsher, and leaves far more to be desired than the ordinary movements of language.

It ends up raising the question: Whose language, culture and customs get the necessary space to function, be valued and remembered beyond the hot ephemerality of pop culture and ‘the moment’ with any degree of respect? And whose is treated as a disposable fad?

The rise and fall of the word ‘woke’ represents the many stages of the life cycle of appropriated words. These words are ripped from black lexicon, formulaically rinsed and repeated non-stop ad infinitum, treated as trendy slogans, adorned on cute Etsy tat and high street campaigns until the whole torturous process inevitably ends after a year, followed by a cultural purge of the aforementioned black slang.

Words like ‘bae’, ‘fleek’ and ‘yas’ are all consigned to list, after list, after list of ‘words that should be retired‘ after they have served their trendy usefulness to a white audience. This conversation, in a nutshell, repeatedly tells minorities that their cultural value is ephemeral, that their place in the pop culture, language and political thought is only assured by the continued entertainment of the white majorities.

This is a process repeated wholesale on everything from box braids and baby-hairs to ‘ghetto’ acrylic nails, to traditional cultural dress, and sacred rites and passages so divorced in pop-culture consciousness from their origins as to border on meaninglessness. This is not only how cultures are stolen, but this is how cultures die.

And this is how ‘Wokeness’ died. It exists now as a commodified, empty concept dislocated from its cultural origins, used to sell t-shirts and mugs, and bumper stickers, and sweaters. The culture of wokeness, or rather the product we are being sold, implies passivity, a checklist of things to do to perform goodness. To refer to ‘being woke’ is to no longer make any differentiation between the soulless institutions that seek to exploit the individual and an essential wariness of them, but rather the collapse of all distinction.

In an ideal world, all language would be up for grabs, but in the world we live in – one in which the resources for conservation of lexicon and pop-cultural artefacts are skewed against minorities – a respect for ownership, and a considered avoidance of opportunism is key. Wokeness has been turned into profitability, a rather sad but bitter example of how the substance of resistance has been corrupted by the very structures it once told us to be cautious of. I’m pretty sure that’s not woke.

Linkedin
RELATED ARTICLES
OTHER ARTICLES
Following the announcement of an 80% hike in the energy price cap from 1st October, crowds gathered outside the offices of energy regulator Ofgem to protest and declare their intention to undertake a payment strike.
The two-day long event returned to London this year, showcasing a spectacular parade, steel bands and Caribbean food.
Birdy Chu reflects on documenting the historic moment in which the territory was formally passed back from the UK to China.
By turning a real-life crisis into daytime television fodder, TV bosses have once again shown themselves to be completely out of touch with audiences.
A 37-year-old woman shares how her abortion led her to become a clinic worker, and the abuse she’s received in that role.
Photographer David Corio’s archive offers a glimpse inside a revolutionary era of music and nightlife.