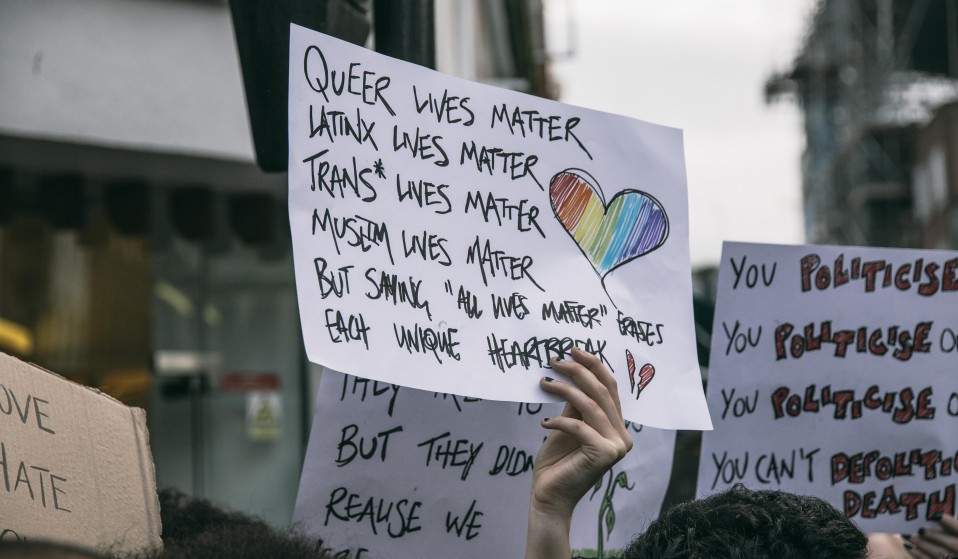 The Orlando massacre has thrown a community into mourning, but the reality is LGBT people face violence and oppression everyday.

The Orlando massacre has thrown a community into mourning, but the reality is LGBT people face violence and oppression everyday.

It’s Sunday morning, and it’s just hit 8am. I’m stumbling home from a party. I’ve been at a club, lost in the pumping haze of the nighttime. We danced for hours: drinking, talking, laughing, touching. Now I’m walking through the streets of London trying to find my door. I know where my house is, but as I soldier on through the morning sunlight I can’t help but feel that home, in many ways, is where I’ve just been. Tears of happiness roll down my warm cheeks.

I make it in the door. I jump into bed. I dream.

Waking up at 4pm, maybe later, I lie under my covers, piecing together the hours spent lost in a glistening blur the night before. The music, the people, the touching – bodies lost on the dance floor.

It’s a party, we all love to party, but for us this means something more. It’s safety.

Outside I hear the young lads heckling, the cab driver muttering under his breath. I saw the stares, the shaking heads, the subtle disapproving looks towards the queens and the queers queuing outside the doors. We see you and we feel you, when you look, when you tut, when you hit.

Back in line I look to those around me, the lines snaking down the pavement with beautiful creatures from all walks of life. I see the all too visible scars that we carry with us. The anxiety, the shame, constantly looking over our shoulder to see who’s there. The physical scars that mark our bodies.

We step inside, the music blaring, the people dancing, the lights flashing bright up above. A weight lifts, our fears subside, for a few short hours we have nothing to be afraid of. We get lost, a heavenly utopia.

If you’re not like me, like us, then you probably won’t understand. For you a night spent under the cover of darkness in clubs is a hedonistic joy, and so it should be. You shouldn’t have to know how it feels to take note of your surroundings when simply expressing who you are. When you walk the streets, when you sit on the bus, when you go to the pub. When you’re talking to strangers, to your family, to your colleagues at work. No, you shouldn’t need to worry about holding hands, embracing, showing affection and love through a simple kiss.

But we do, everyday.

I’m in my bed. I look at my phone, and I read the news. 50 dead, more wounded, a community bleeds. A song plays, and I cry real tears.

For us the club is a place for freedom, but now that too has been taken away, at a time when they’re needed more than ever.

In the United Kingdom at least, those spaces are closing. As with all pubs, bars and clubs, LGBT venues are shutting at an alarming rate. Outside major cities money is just too tight, while in the capital and elsewhere soaring rents mean these safe havens are seeing their doors forced shut. It’s a similar picture in the United States too.

Without these places of comfort and refuge, the magic of the night time becomes ever more precious.

Don’t tell me the Orlando shooting was just an affront on people having fun, don’t tell me the queer identity of those we’ve lost is nothing more than coincidence. When was the last person beaten up, attacked viciously on the street, shot dead simply for being straight? When trans people of colour are being murdered day by day.

Don’t tell me that homophobia and transphobia are something of the past, that this was a lone wolf acting against the grain. Stonewall’s 2014 research into homophobia in schools found 86% of secondary school teachers knew pupils in their school suffering homophobic bullying. 34% of young LGB people and 48% of young trans people attempt suicide, that 24% of homeless youth are LGBT, and 80% of trans people will experience domestic violence at some point during their lives.

Don’t tell me the fight is over, when laws are being passed in the United States that stop trans people using the bathrooms that their gender identity requires.

Don’t tell me it’s different in Britain, when I tune into national radio, wounds still fresh, and I hear transphobic guests given a platform to deny the very right of those we stand with to exist. When lifesaving drugs like PrEP are denied to those who need them, and as a result we die everyday.

Don’t tell me that you care, when you’ve sat silently by for generations. Don’t call yourself an ally when it suits you for personal or political gain. Don’t pat yourself on the back for supporting same-sex marriage simply because no longer were your long-held views palatable thanks to years of struggle. Don’t tell me it’s not erasure.

Linkedin
RELATED ARTICLES
OTHER ARTICLES
In our first OFFF Dispatch piece, the Arce Studio founder shares her tips on standing out from the crowd.
New legislation is set to make it more difficult to hold Israel accountable for its human rights abuses.
Over the weekend, London locals came together to resist a pre-planned police raid targeting delivery drivers.
Photographer Robin Graubard’s debut book offers an unflinching record of turbulence and change across the Balkans.
The author discusses her blistering new novel about history, revolution and queer love.
While protests over abortion rights rage in the US, access to abortion services is still almost nonexistent in parts of the UK.