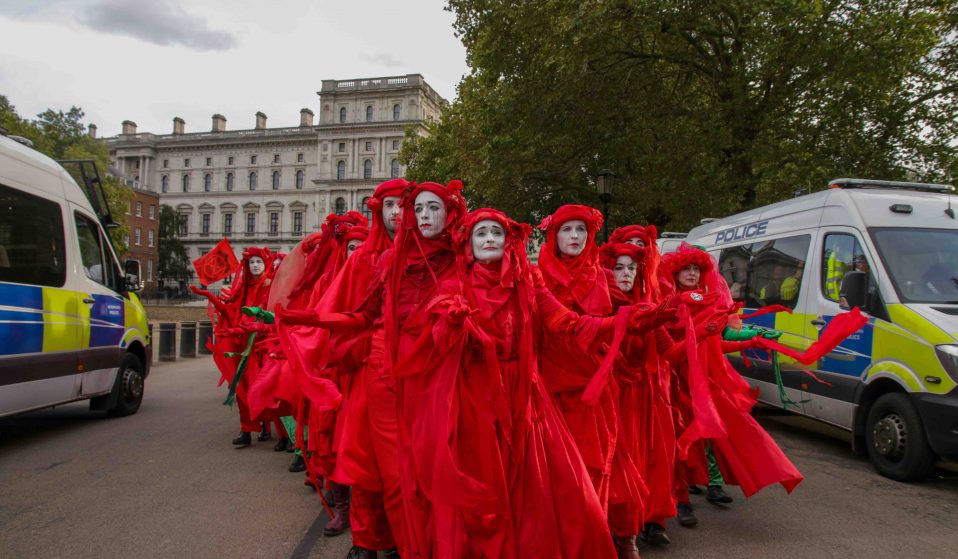 Writer and photographer Peter Brooks braves the heckles with the most enigmatic faction of the Extinction Rebellion uprisings.

Writer and photographer Peter Brooks braves the heckles with the most enigmatic faction of the Extinction Rebellion uprisings.

“The Reds are here!” comes a shout from the crowd. It rings past our rippling procession as we weave our way through protestors. I place one foot forward, and then after lingering at a funereal pace, the other follows.

It’s the second day of Extinction Rebellion’s Autumn Uprising, and activists cover the London streets, stretching from one memorial to the next. Some are glued to Whitehall pavement, others are locked to each other. Police officers – fluorescent figures punctuating the masses – encircle protestors facing imminent arrest.

I am joining the protest by walking with the Red Rebel Brigade. The group, who are perhaps the most enigmatic part of Extinction Rebellion’s global demonstrations, have been met by intense public and media interest since their conception in April 2019. Starting as a group of 24, their ranks have swelled to over one hundred participants in the London actions of October 2019, and up to a thousand globally.

Their founder Doug Francisco describes them as a “performance protest”. Their red robes and slow, theatrical manner are intended to be in “juxtaposition” to the urban environment. Seeing the reactions of tourists, shoppers and London commuters – smiling, swearing and taking photographs – seems to attest to this.

The vivid colour of the costumes is meant to symbolise the blood shared by all species. But their performance is more concerned with emanating emotion through specific poses (they co-ordinate together to perform love, hope and sadness, to name just a few). The group also change plan without warning, surprising protestors, police and the public. So far, they‘ve been seen on the tube, blocking roads or appearing in Oxford Street department stores. 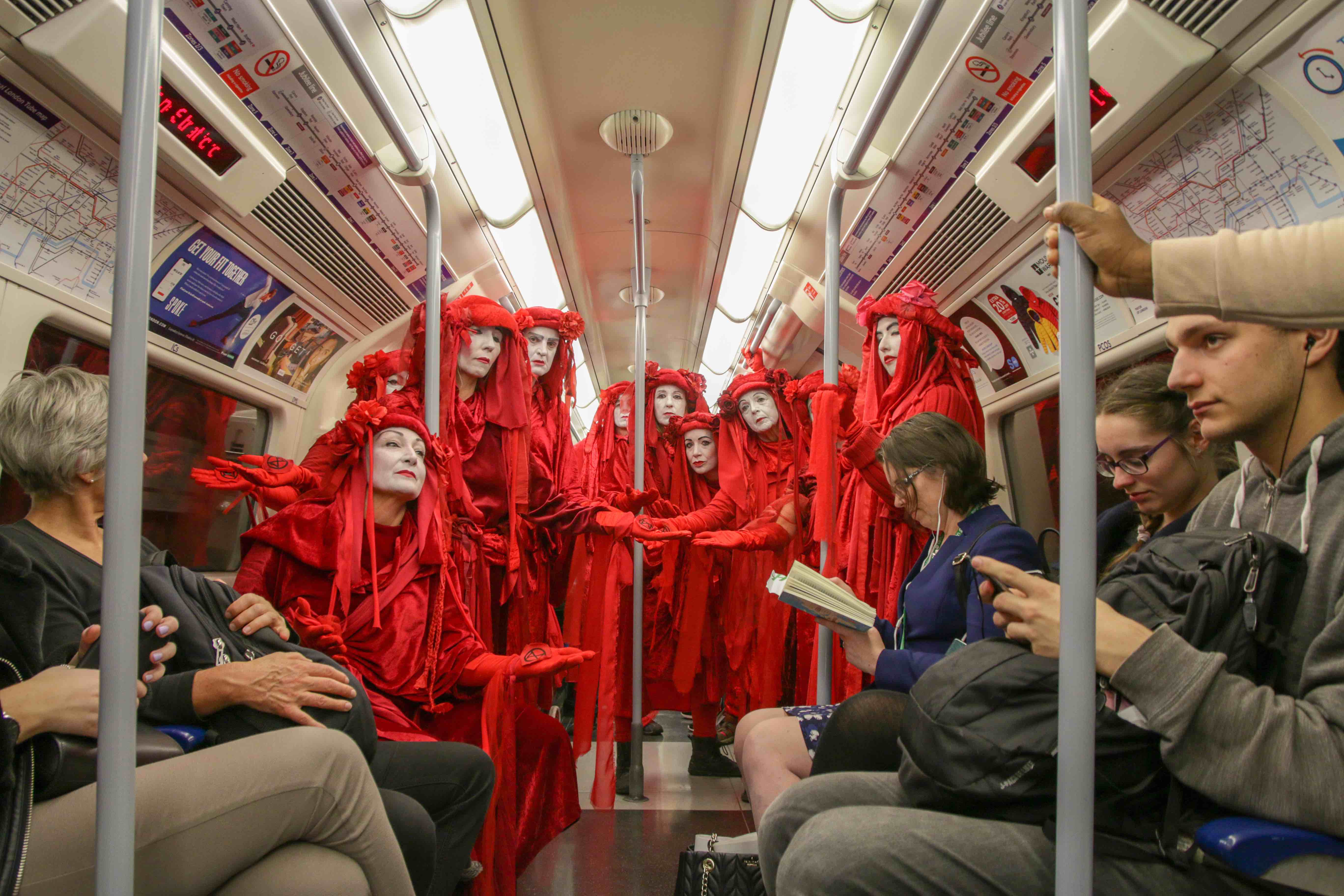 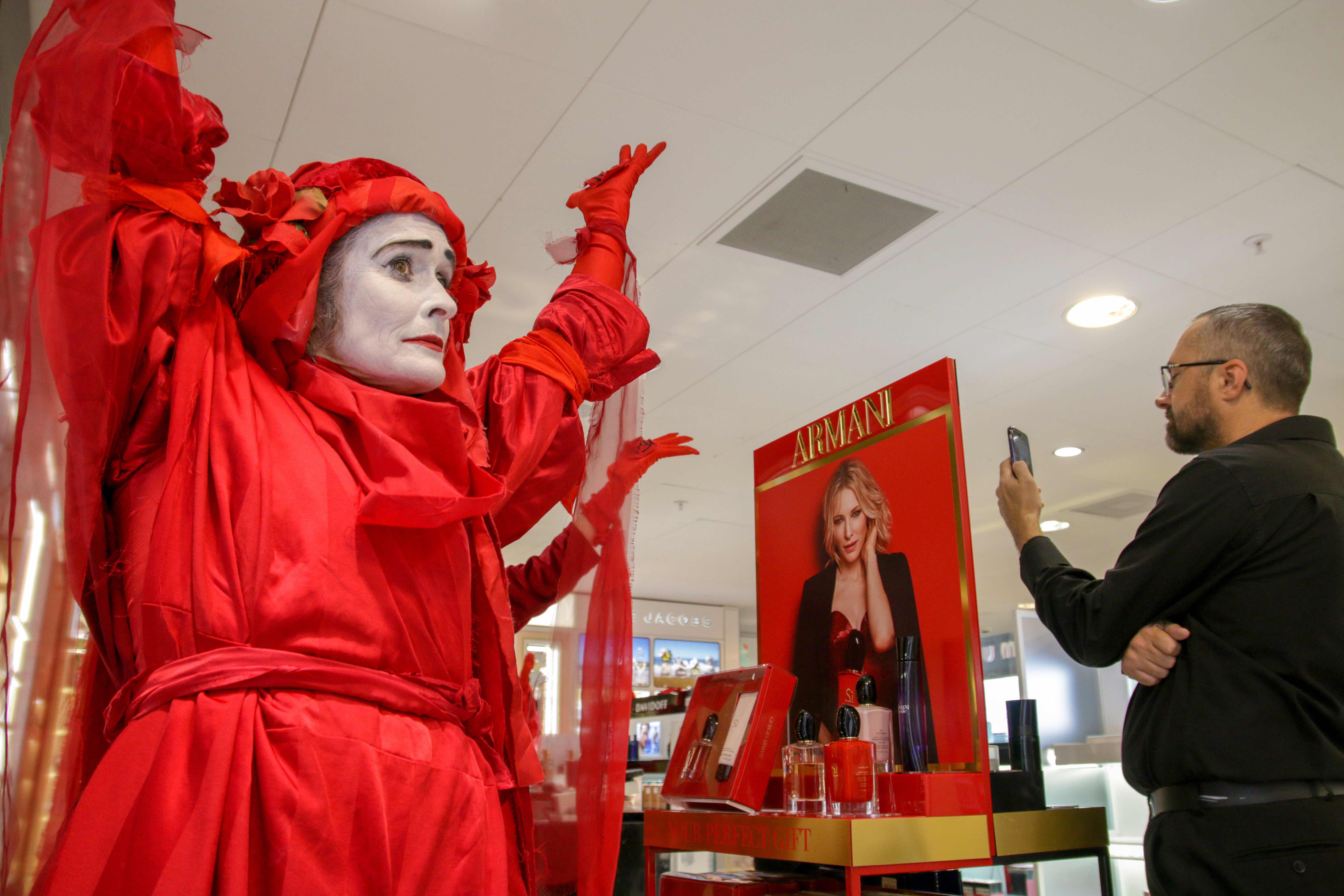 The Reds operate at the intersection of activism and art, and in doing so seem to calm each space they enter. As Francisco points out, even the most non-violent of protests is tense, so the role that the Reds have found is to humanise and de-escalate uprisings. This is not universally successful, however; police officers will argue with the Reds’ plainclothes chaperones and heckles are often heard from the public. But to date, no Reds have been arrested, compared to over 1500 activists detained. When lining up to face officers it is never for long, and they move between Extinction Rebellion sites to spread support and solidarity.

At the end of the first day of the Autumn Uprising, the Reds were gathered in the crypt of a London church, peeling off sodden ribbons and veils. As thick white masks were removed, they broke character and the pent-up emotion of the day became clear.

One Red Rebel claimed to have been “channelling love” all day. The focus was on loving “every single protestor, every single person”, she said, before welling up and apologising. “Everything calms down when you arrive,” she continued, “the police are put on the back foot”. 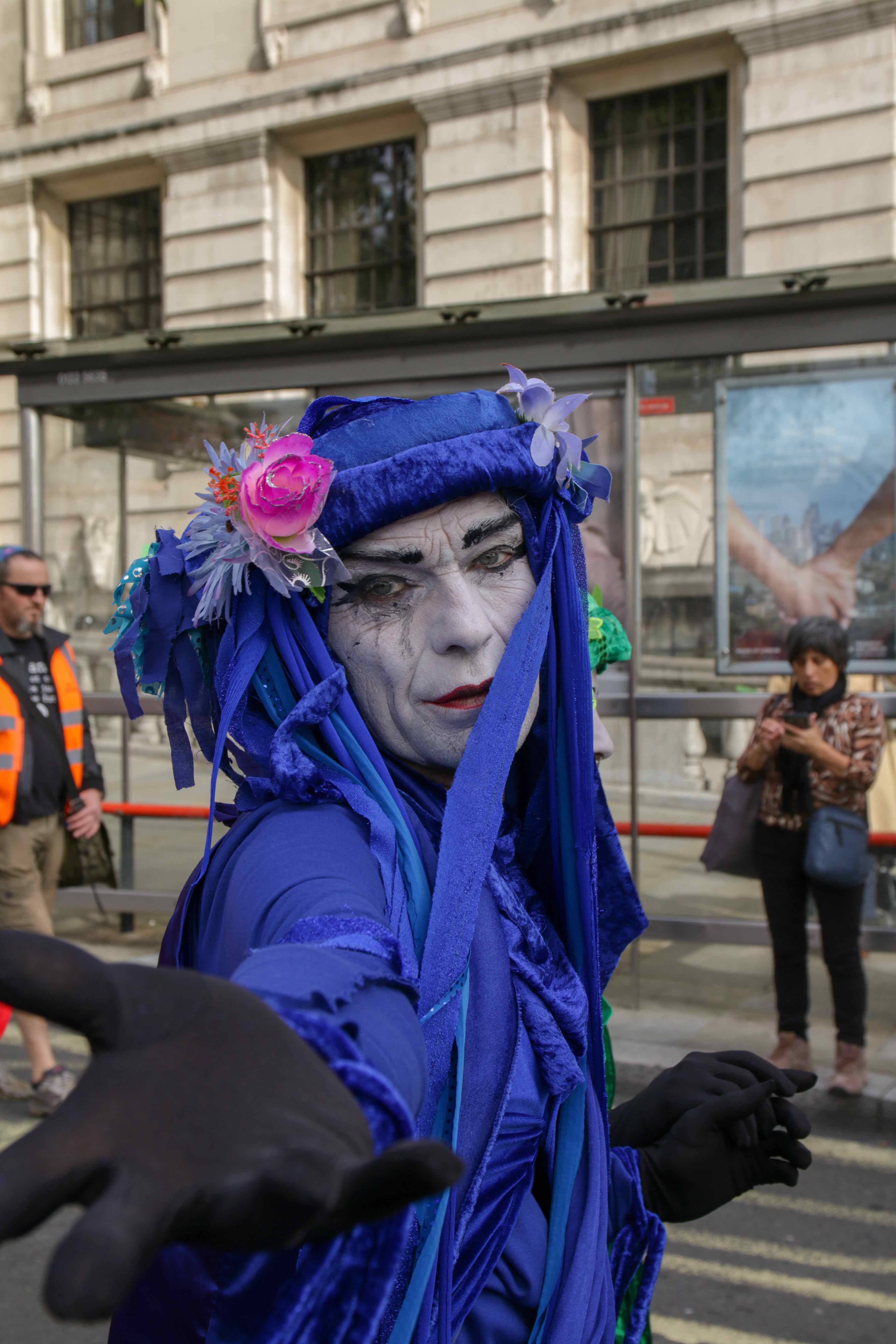 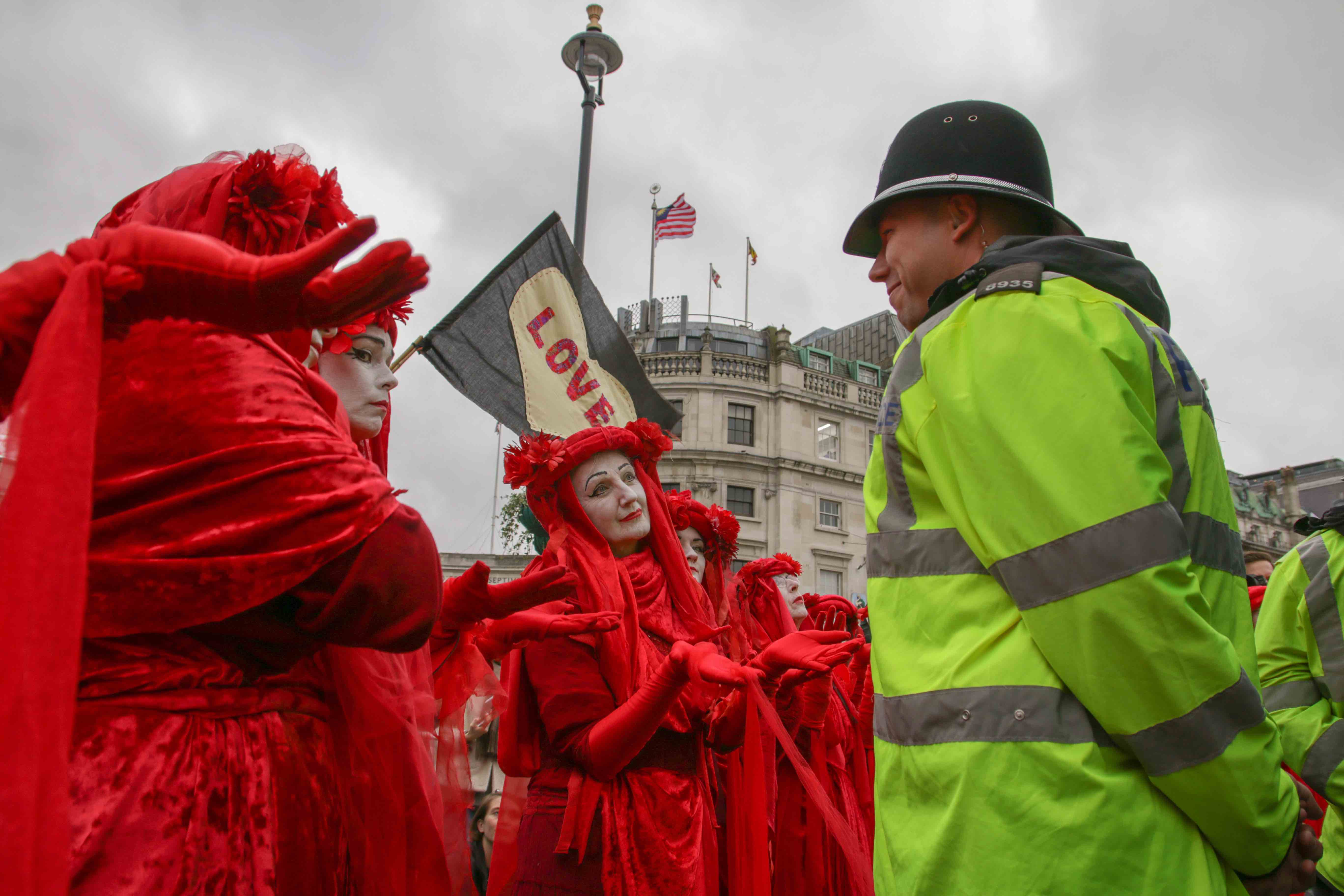 Early in the week, the police seemed bemused by the presence of the Reds, trying to make them laugh and break character. As time went on, they became visibly more uncomfortable – and even moved – by their presence. The first April performances “felt like playing, it felt like having fun”, another Red explained. Yet a few days into the October Uprising it became “more solemn, and more mature”.

The Red’s share Extinction Rebellion’s horizontal and decentralised structure. Francisco quickly relinquished control of the group’s direction, “humbled” by its expansion and the creative interpretation of its members. There are Greens now among the Red, even a blue. It’s impossible to predict the future of the group, but Francisco is convinced they must keep evolving to stay emotive and effective. The Red’s are confident in their legitimacy as an art form. There’s even talk, and action, towards trying for a Turner Prize nomination. Could they convince the jury? If, as one a heckler shouted during the week, the group are “just fucking performance art”, then why not?

Communicating solely through emotion rather than logic or analysis is a unique position that the Red Rebel Brigade hold. They hope to resonate through a shared humanity as another way to spur action addressing the climate crisis. Speaking to Reds individually, they all remain optimistic: “It makes you think that change is possible from the reaction it creates”.

Until change is seen, they will continue to grace the streets, front pages and your social media feeds. The Reds will “keep doing this, showing up until people listen”. 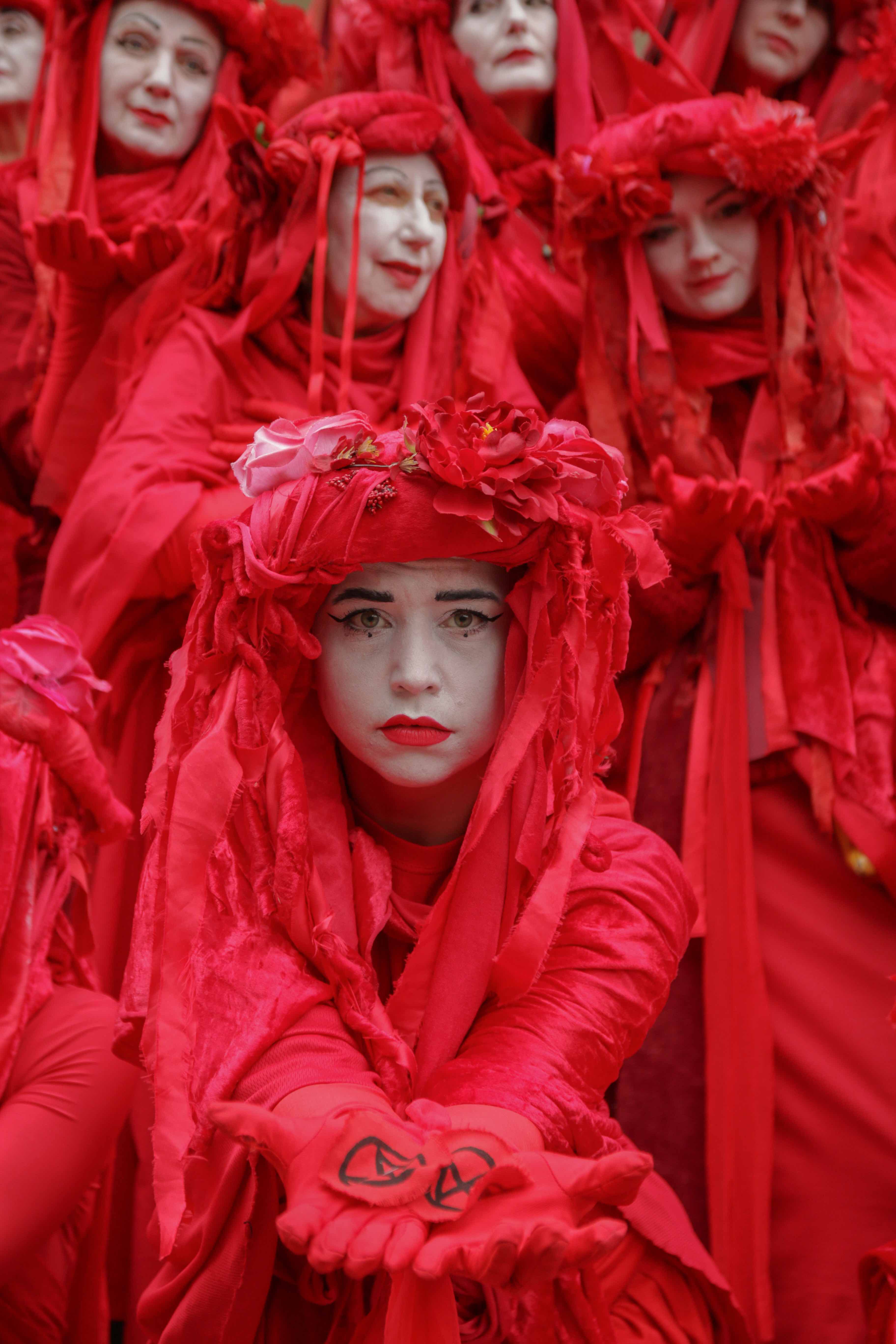 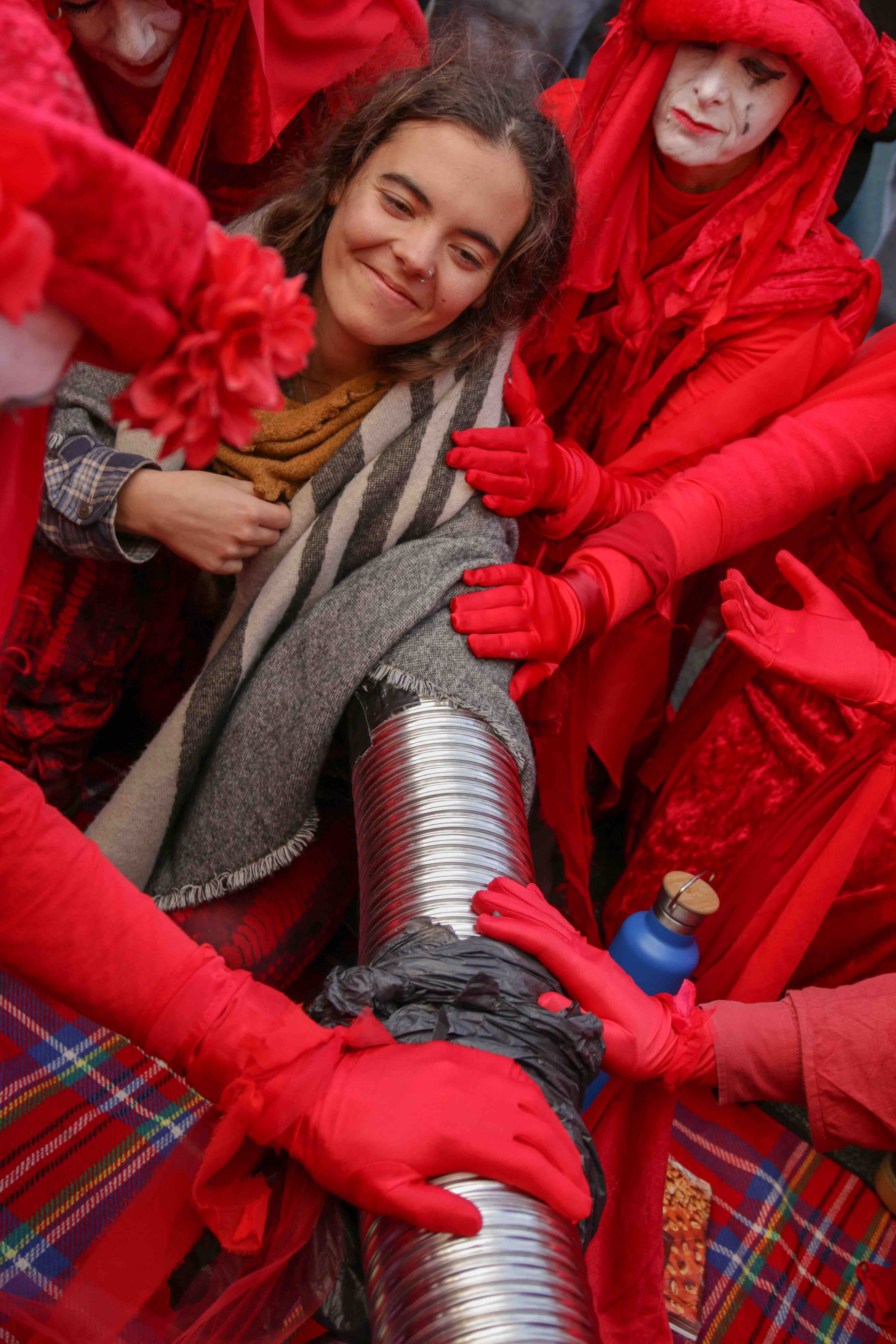 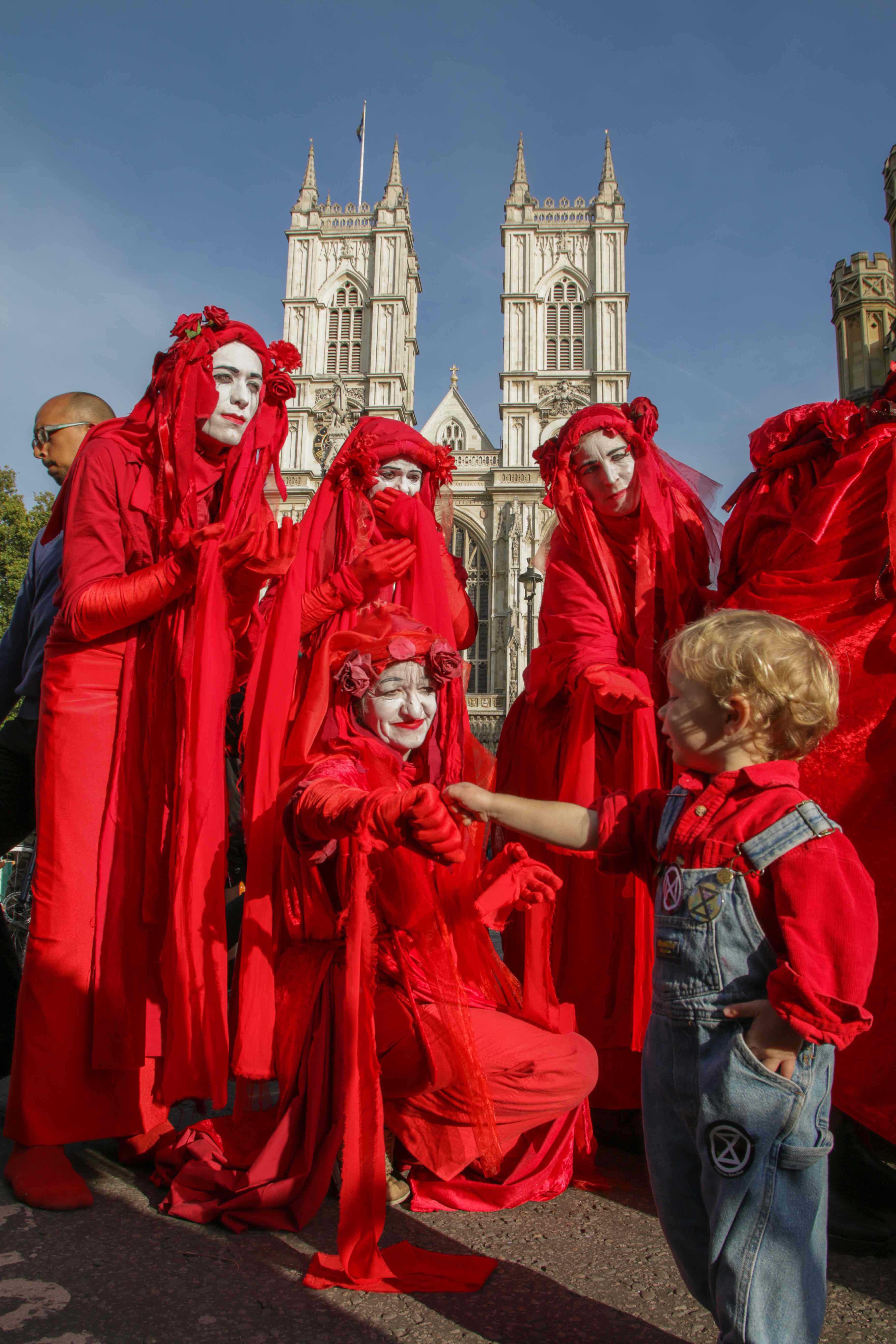 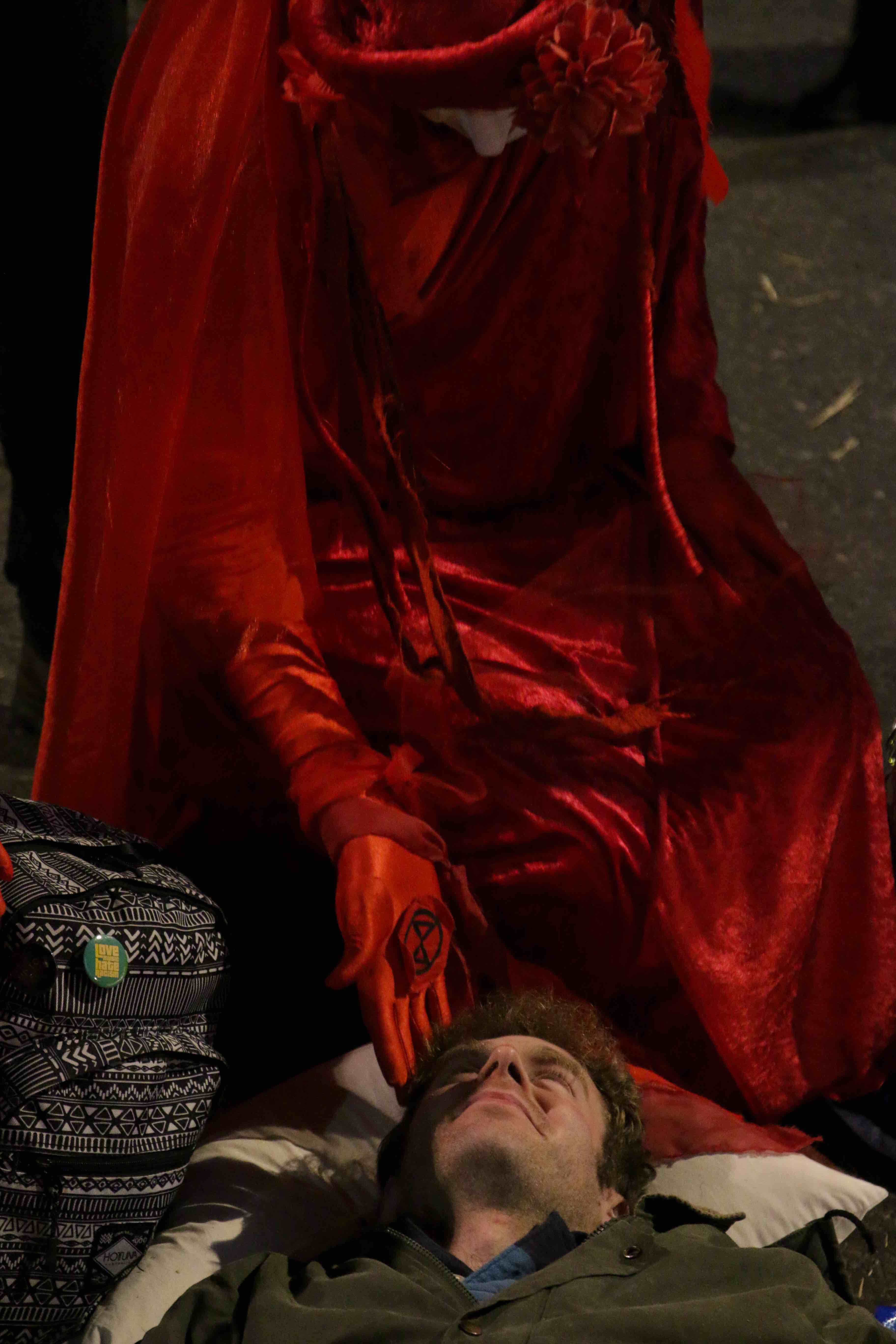 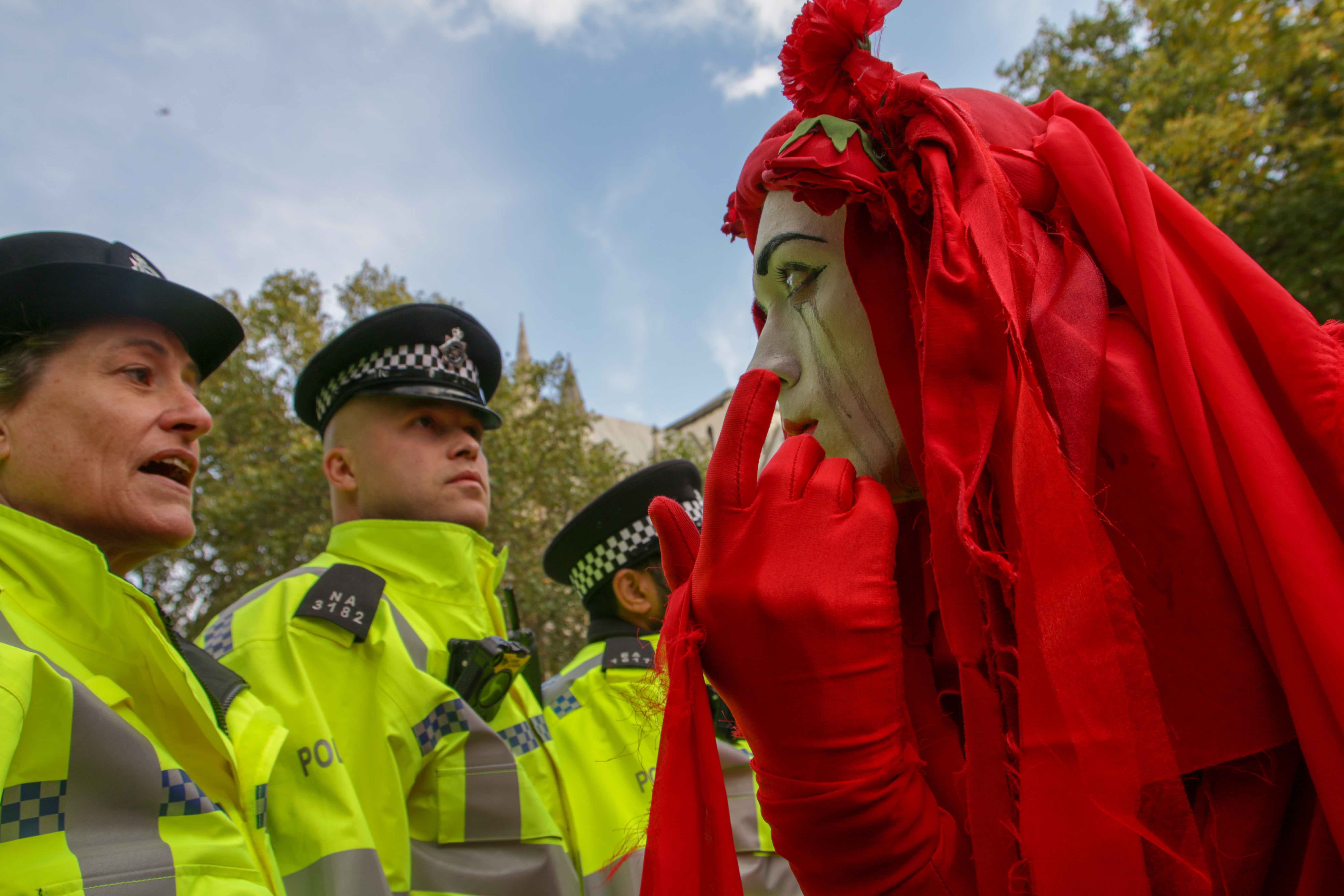 Linkedin
RELATED ARTICLES
OTHER ARTICLES
Photographer Robin Graubard’s debut book offers an unflinching record of turbulence and change across the Balkans.
The author discusses her blistering new novel about history, revolution and queer love.
The government’s failure to take long Covid seriously has led to the formation of a group campaigning for the thousands of forgotten victims of the illness.
New legislation is set to make it more difficult to hold Israel accountable for its human rights abuses.
After news broke last week around an expected reversal of the 1973 landmark law that made abortion legal in the US, protestors gathered in the UK in support of American women.
Following the release of his latest album God Don’t Make Mistakes, the rapper talks horror villains, police brutality and being unafraid to show his vulnerable side.