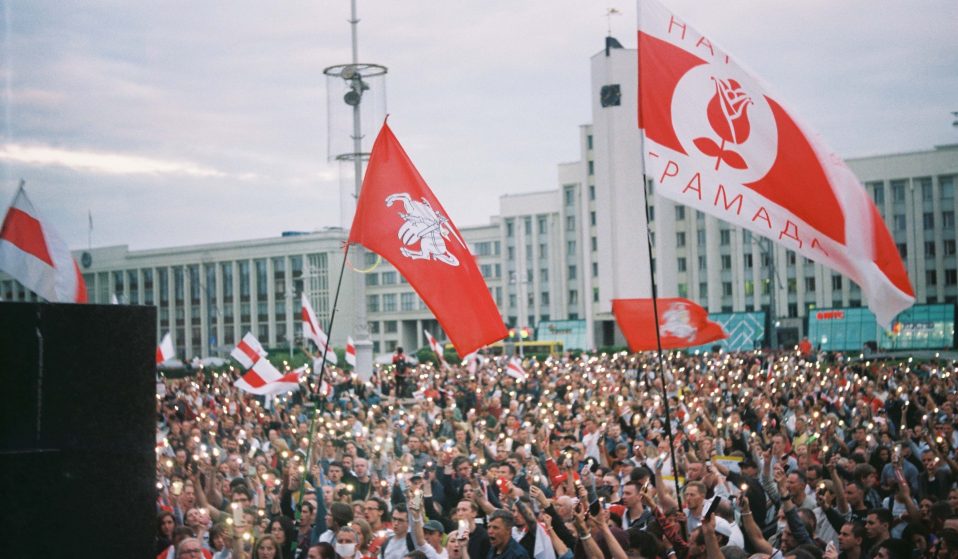 As protests continue to erupt across the country, a new generation of photographers are at the forefront of action, documenting demonstrations in real time.

As protests continue to erupt across the country, a new generation of self-taught photographers find themselves at the forefront of direct action, documenting demonstrations in real time.

A sea of people fill the streets in the European sunlight. There are flags, banners, chants and songs. They dominate the wide boulevards, walking past grand facades, monumental architecture and litters of history. A couple of confident young men climb a statue of Lenin and hang a flag around the concrete body.

This is Minsk, the capital of Belarus. To those accustomed to the imagery that best defines protests, this kind of scene probably sounds familiar. But to those in Belarus, the landlocked Eastern European state with a population of just under nine and a half million, this is uncharted territory.

For the past two and a half decades, Belarus has existed in a way that did not fall on the radar of many outside of the region. This all changed when Alexander Lukashenko, Belarus’ strongman president since the establishment of the office in 1994, secured a sixth re-election on 9 August of this year. He cruised through with an apparent 80 per cent of the vote, marking his 26th year in power. Immediate uproar followed, with widespread accusations of voter repression and ballot burning. 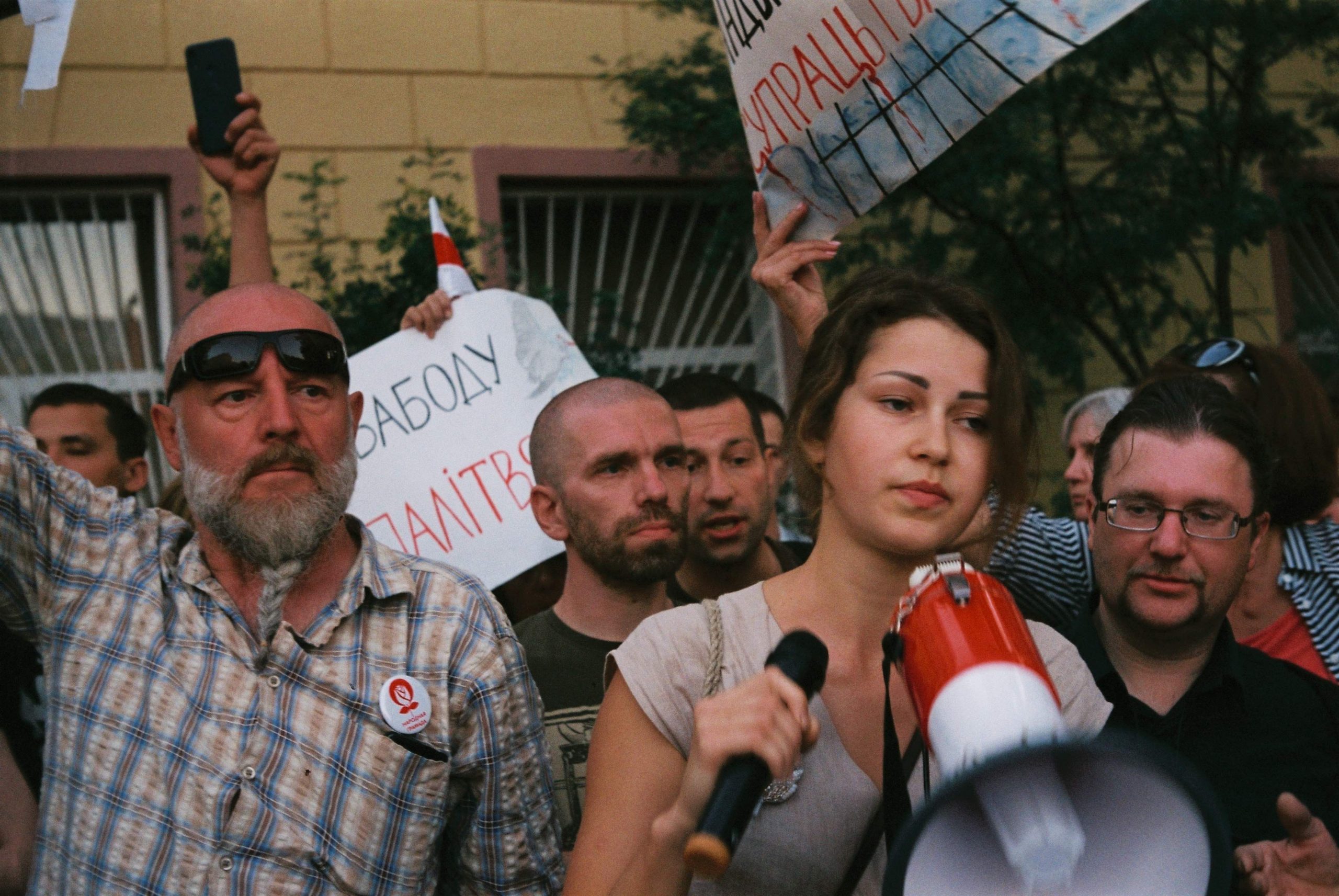 The fraudulence of the election was not unexpected. Indeed, each of Lukashenko’s re-elections have been defined by censorship, raids, police brutality, stifling of dissent and arrests of opposition figures. What was unprecedented, though, was the reaction on the streets – leagues of marches, protests and rallies in direct opposition to the president.

Though many taking part in the protests are supportive of the main opposition candidate Sviatlana Tsikhanouskaya, who ran in her husband’s absence after his arrest for participating in an anti-government rally, it contains a mix of people uniting against the regime after two decades of built-up hostility. People are fed up of corruption and intimidation. 9 August was a breaking point.

But amid the current turmoil, a new generation has been exploring creative ways to call for change. In recent weeks, photography has found itself at the forefront of direct action, as young Belarusians take to the streets, cameras in hand, to communicate their feelings and record demonstrations in real time. 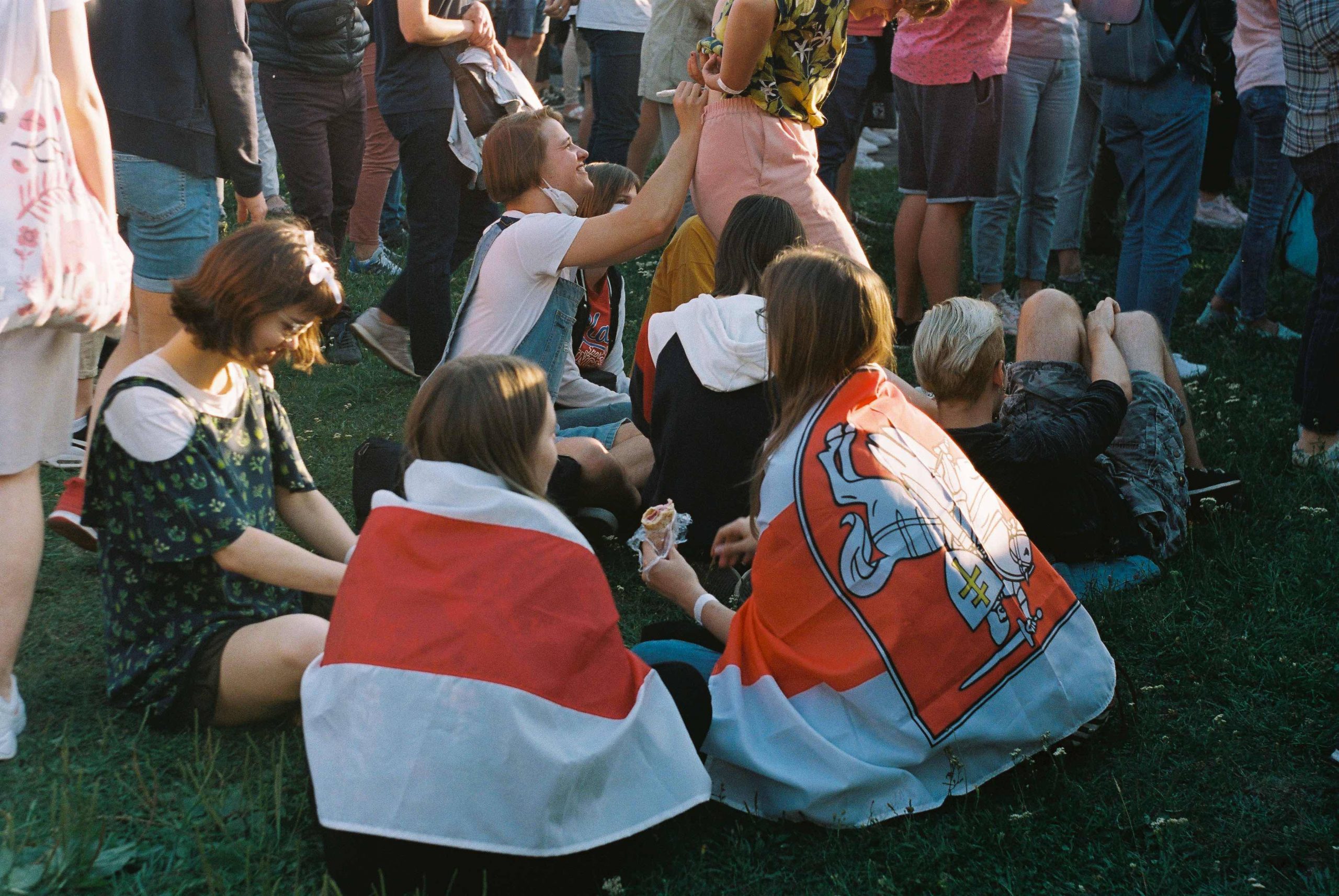 “There are so many other outstanding photographers shooting our streets these days!”, says Alyona Savitskaya, 22, a keen photographer herself.

“Once you realise [to look] for it, you start noticing people with soap dishes on the streets,” adds Vasily Sakharchuk, another young photographer – soap dishes being an affectionate name for compact cameras based on the mutual resemblance.

There is a small but growing culture around film photography in Belarus, which was recently bolstered by a surge of new film development labs, the formation of youthful photo collectives and, in Minsk especially, a host of new exhibitions introducing the medium to a larger audience. Its newfound popularity, when paired with the limitations of independent media in Belarus, has seen a wave of amateur photographers use it to document the drastic changes occurring in the country themselves.

“So many creative people take to the streets. They are all very different, but each with a great sense of humour,” explains 27-year-old photographer Alesia Skidan. “Many see a great sense in documenting everything that happens – [they] ask serious questions, mock the absurd and support others.” 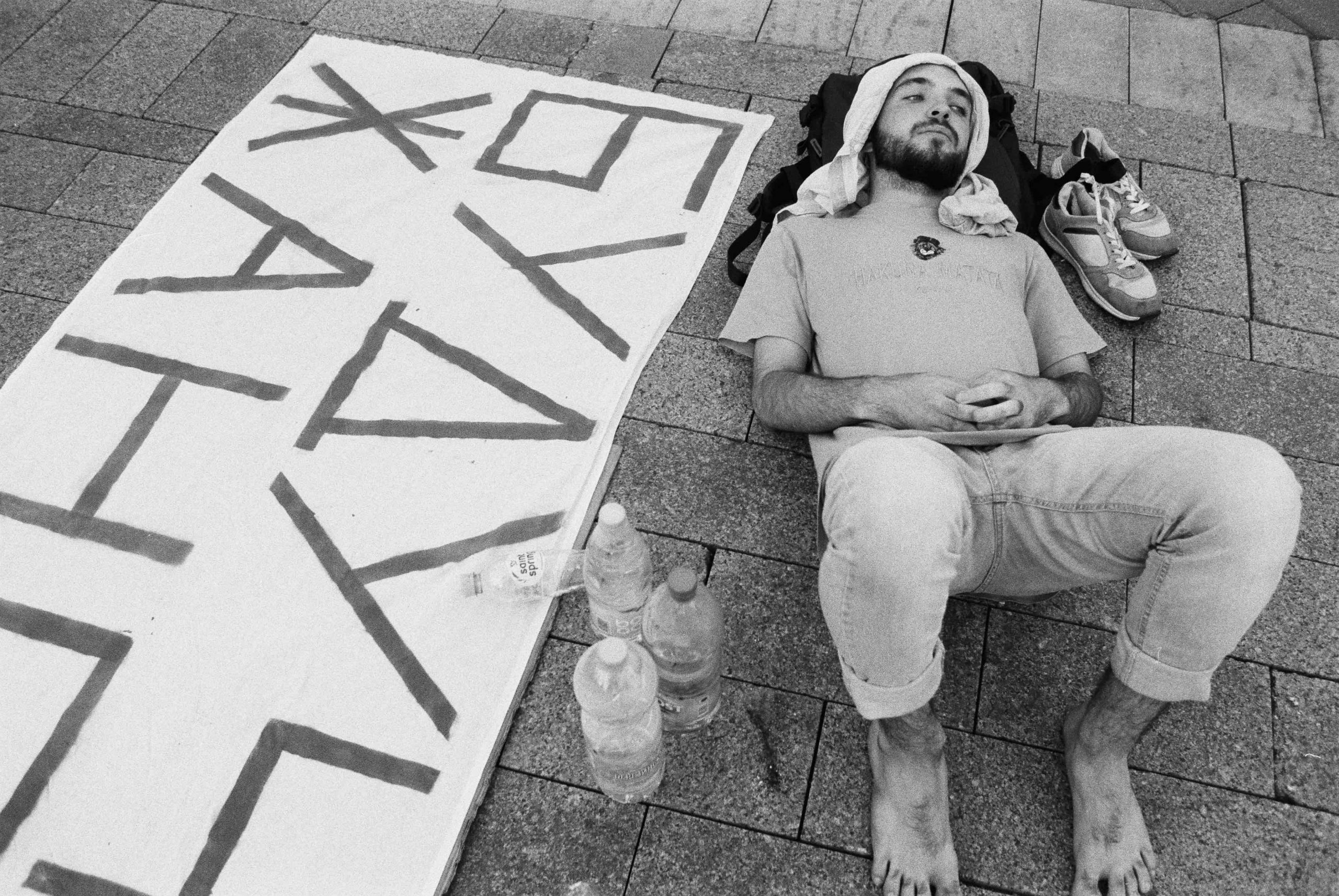 The 2020 election was odd even by Belarusian standards. It was a “dramatically short” and chaotic campaign, with the ruling regime making “numerous mistakes” according to Maria Shkumayeva, who, at just 23 years old, manages a development lab in Minsk. This, alongside the abrasive conduct of Lukashenko throughout the election, had a particularly politicising effect. “Belarusians were politically indifferent before this campaign,” says Maria. “But during the pandemic, people realised that self-organisation principles could be applied to the political sphere of life.”

This helps illustrate why this election, despite the predictable outcome of a Lukashenko win, feels different for Belarusians. Amid the chaos of a global health crisis, the stakes feel higher. Increased levels of participation and political awareness have become an urgent task and photography has quickly revealed itself as a universally accessible way for people to begin doing that.

Instagram has been at the forefront of this. A video of an elderly woman moving past an intimidating riot policeman, stating “I’m Walking” to crowd applause, recently went viral: her phrase – #ягуляю – quickly become a popular hashtag as a show of solidarity. Moments like these are becoming increasingly rife in digital spaces. 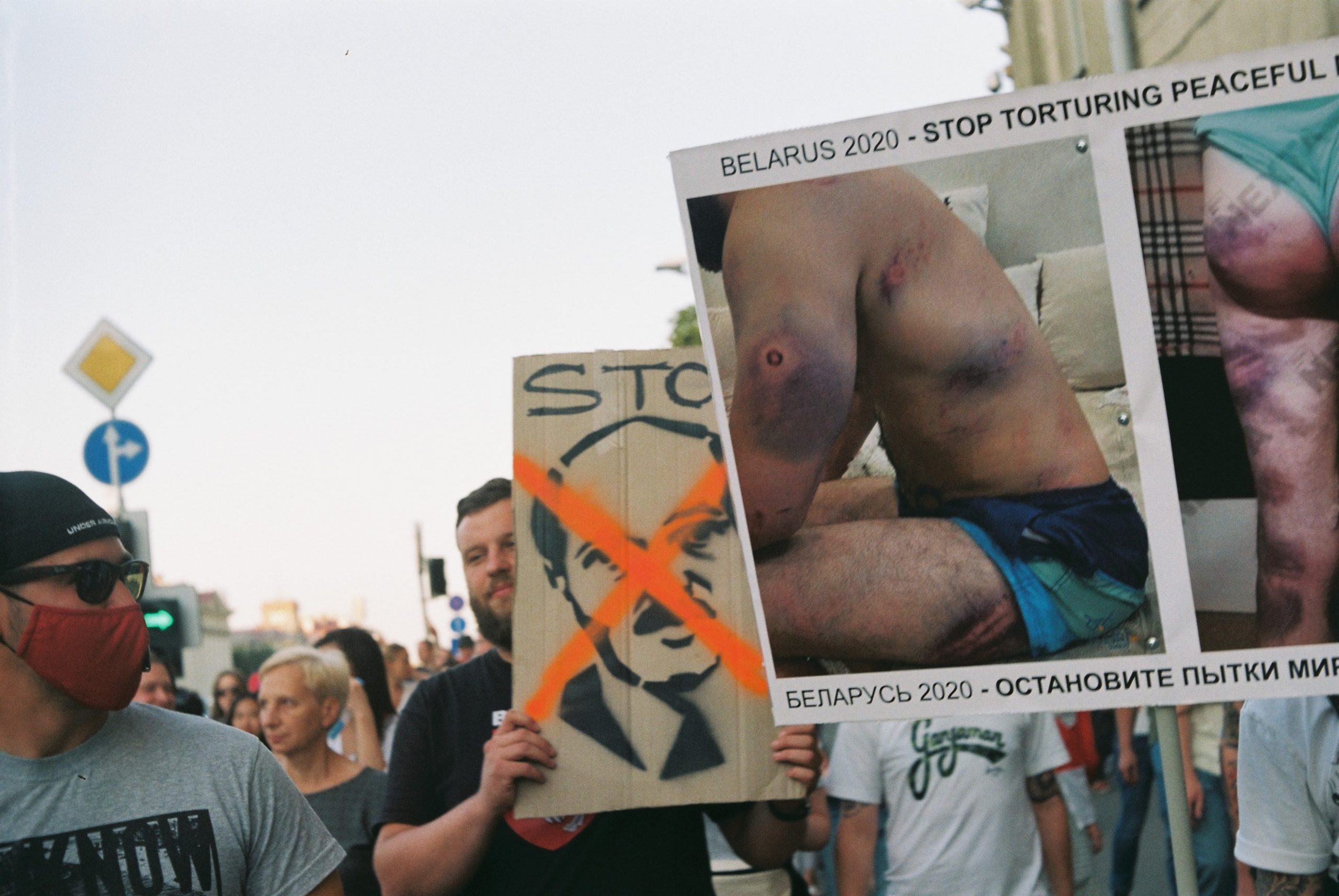 While it could be argued that higher levels of social media activism lead to less of an onus on direct action, the increase in photography as a tool of protesting Lukashenko’s Belarus contributes to the strength of feeling on the ground, getting the message out there to an even wider demographic. It lies in stark contrast to the lack of direct political participation in previous years.

“It is always scary in our country not only to attend protests as a protester, but also as a photographer or even officially accredited media representative,” says Alyona. “These days protests seem safer…but you never know what to expect from our government, whoever you are.”

The enduring image of the protests has been the national red and white flag of Belarus, a historical symbol for sovereignty which has taken on the meaning of opposition to – and liberation from – what Maria refers to as Lukashenko’s “bloody regime”. The powerful simplicity of the symbol has been a constant through protest photography: the sea of red and white has created a uniform aesthetic. Flowers, other historical flags and symbols such as the traditional Belarusian coat of arms flourish alongside the more expected scenes of signs and banners. 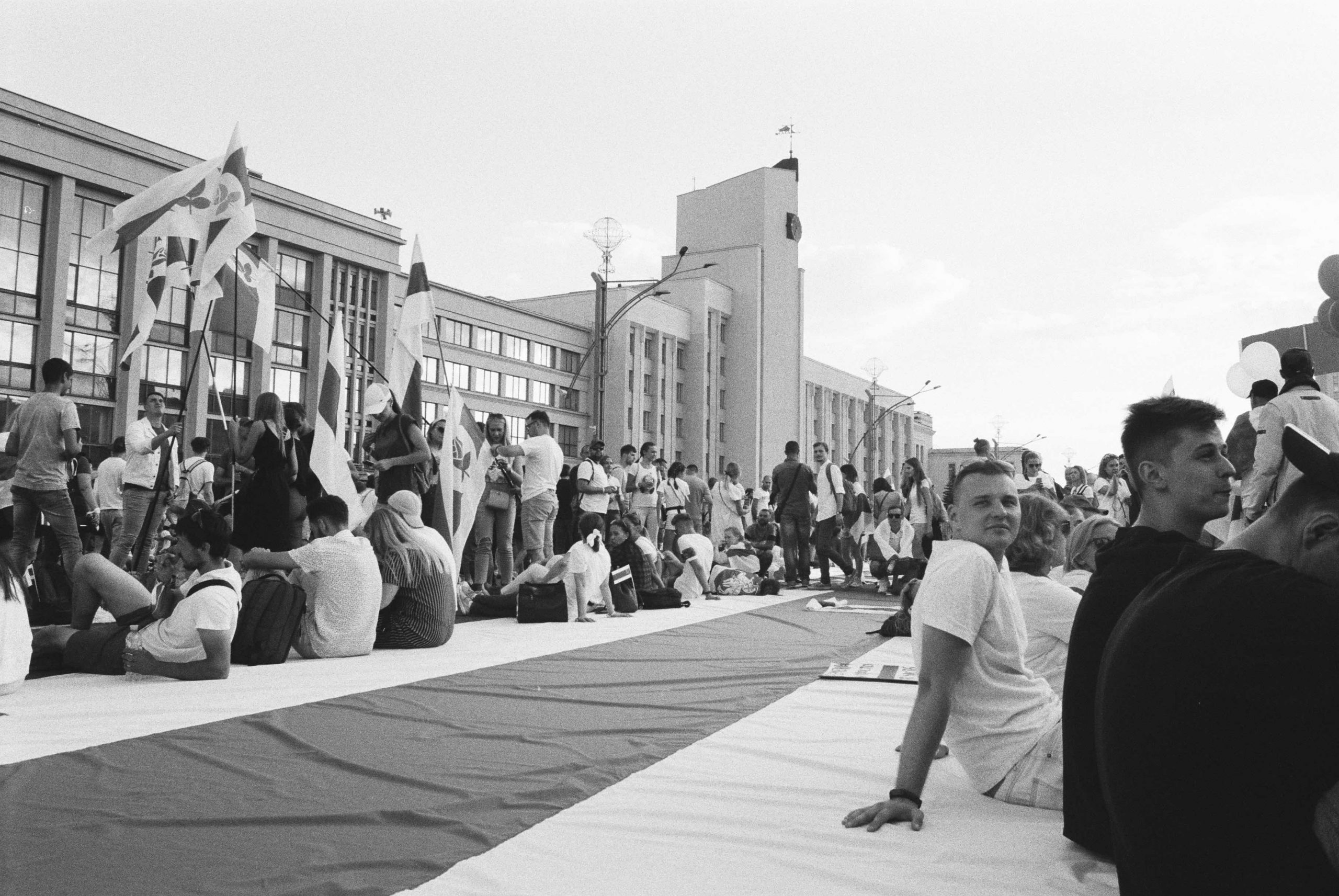 “A white ribbon on the wrist indicates a desire for peaceful change, freedom and truth,” explains Alesia, “Creativity is very important during the protests – without it, this would all be harder.”

“I’m trying to create a frame that will represent the whole situation. Then there [will be] a lot of awareness,” Vasily adds. “You see how families, different subcultures, or ordinary people take to the streets, and then you realise that everyone understands the situation.”

Documenting the peacefulness of the protests is of key importance for those like Vasily, as it helps depict the unnecessary brutality of the crackdown. Representing different communities as united is also vital to countering the state narrative about protestors. In this sense, Vasily views his photos as his activism. “I promote [them] to the masses. And I make it clear that I am the same as everyone else at peaceful actions.”

Protesting on this scale in an authoritarian state can, of course, quickly turn dangerous. As the country’s main opposition leader, Tsikhanouskaya was forced to flee Belarus weeks ago ‘for the sake of her children’. Taking photos of police and government authorities poses comes with obvious risks, but this only makes the masses of people taking part all the more remarkable. A testimony from Minsk resident Anton Efremov, 33, who was detained for participating in a peaceful protest, is harrowing but necessary to understand the whole picture. 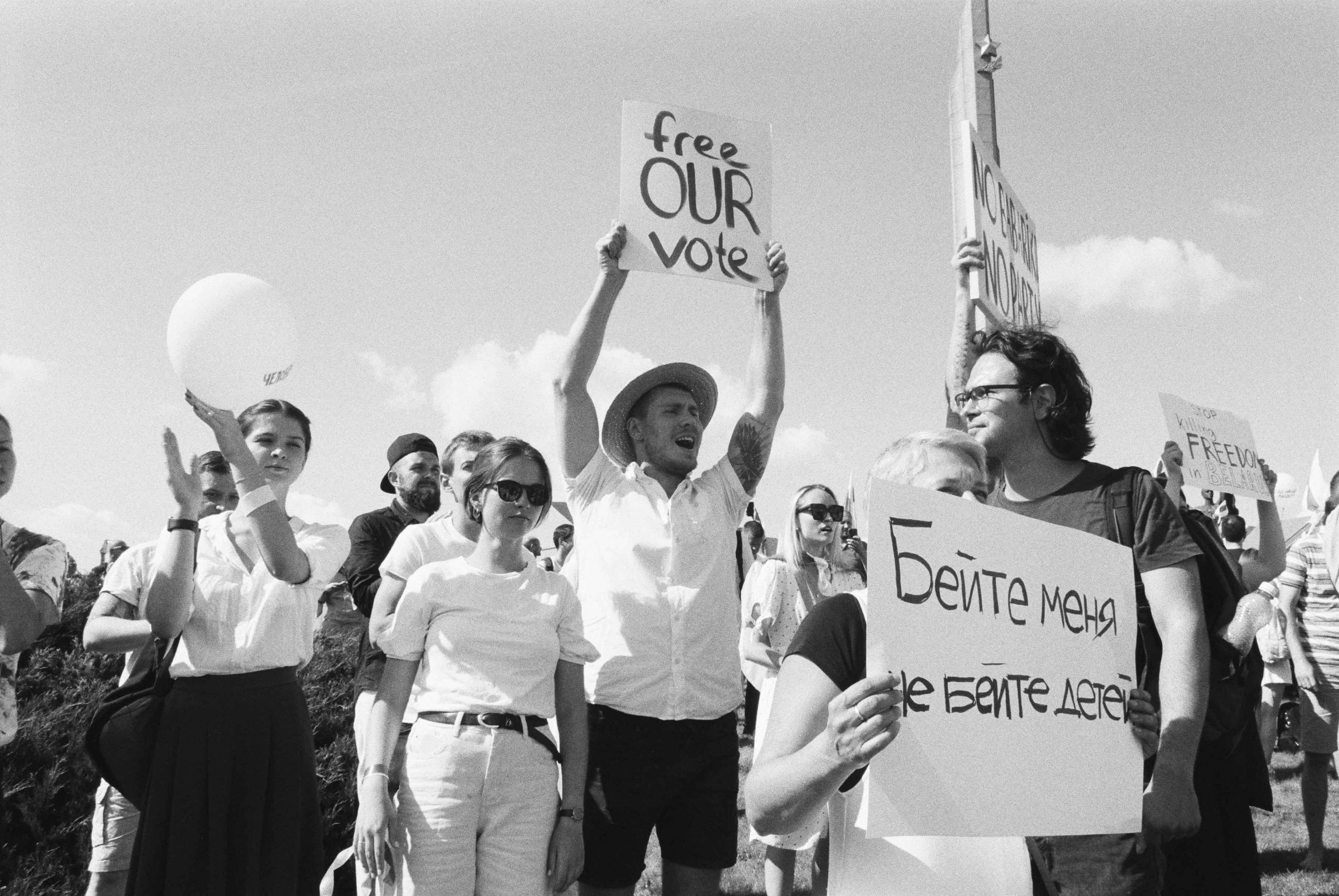 Detentions started in the run-up to the election campaign, outnumbering previous instances of police brutality during elections. Any interaction with OMON (Special Purpose Police Unit), the militia detachment often used as riot police, can lead to beatings. “Active but peaceful protestors, those who run, clap or shout mottos, are shot with rubber bullets,” Anton says. “This is done in order to choke up any form of resistance.” Other photographers have confirmed, and tried to document, the use of tear gas, water cannons and flash grenades on protestors.

But what overshadows police conduct at rallies is what occurs at the detainment facility if protestors are actually arrested. “All the detainees, except those [who are] underage and journalists, are packed into cells of 25 square metres – I have seen cells with approximately 120 people in them,” says Anton, who describes the conditions as squalid (“no water, no toilet, no food,”), in which the minimum detainment period is 24 hours. He also states that he has witnessed some inmates losing consciousness, while others were seen not breathing. “Unfortunately, we do not know about the fate of those people.”

Anton’s testimony, which is one of many, signifies how these protests can be a case of life or death. Recent reports that Maria Kolesnikova, a key ally of Tsikhanouskaya and one of the few opposition leaders still in the country, has been detained at the Ukrainian border, just a day after witnesses claimed to have seen  her ‘snatched from the street’ by masked men, are especially concerning. But young photographers are helping lead the charge by making sure the narrative of the people is not lost, demonstrating how the struggle involves all aspects of society. It feels like Belarus is on the cusp of forging a new path as a nation – but it is not going to be easy.

“The most drastic change [in the country] is happening right now,” says Arseniy Savin, 25, one of Maria’s colleagues at the development lab. “We are hoping [for] the most peaceful scenario – but we need to be prepared to have more victims.” 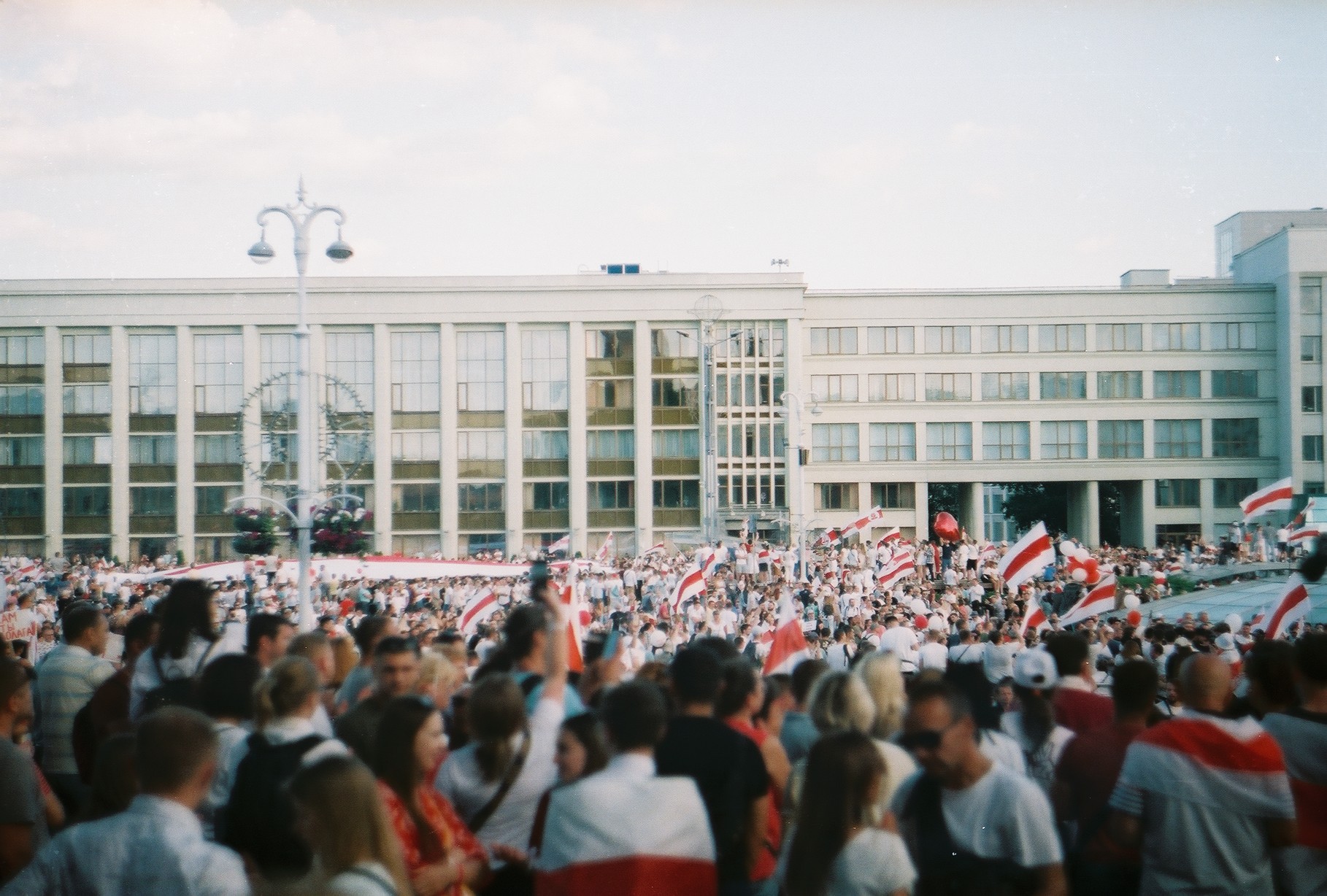 Linkedin
RELATED ARTICLES
OTHER ARTICLES
A new film from Berghaus traces the story of Adam Raja, who left behind a turbulent upbringing to discover the healing power of climbing.
AI companies that develop image-generators using copyrighted artwork from the internet are coming under fire from artists who say that it amounts to theft.
As she gears up for the release of her first book, the 24-year-old climate activist talks standing up to authority and building a more inclusive movement.
Following the release of his debut single, Deyaz talks battling addiction, dealing with his struggles through music, and building a budding music career from his living room.
Filmmaker Laura Poitras discusses her new documentary which traces the remarkable life of the artist-activist and the impact of her battle against the US opioid crisis.
Photographer Becky Tyrell went down to the fading banger and stock raceway to meet a community desperate to keep it alive.