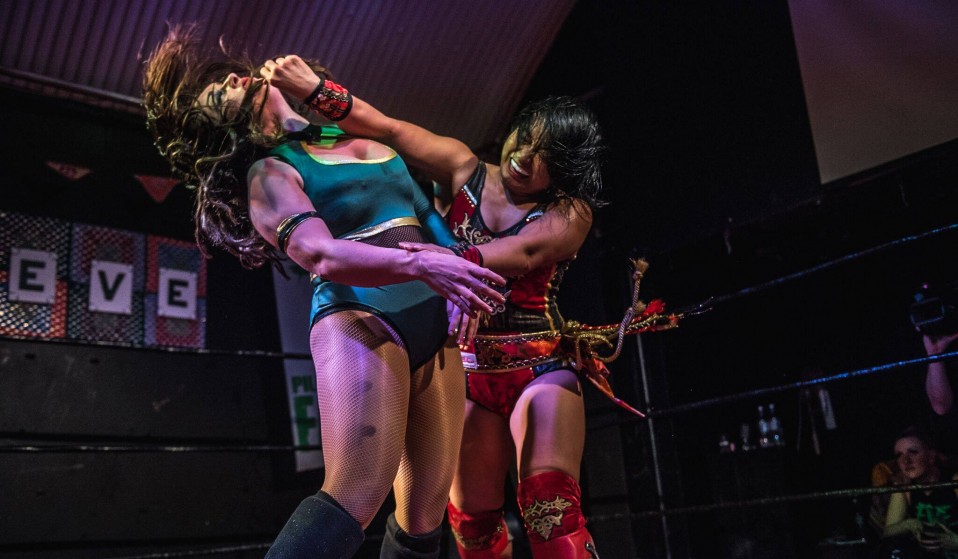 It’s a sweltering summer’s afternoon in east London’s Bethnal Green – and it’s about to get even sweatier.  A sharp left down a narrow alleyway reveals my final destination, albeit an unlikely one. A floral pink banner, gaffer-taped to a graffitied blue door, marks the spot. The black lettering spells out a cryptic clue for puzzled passersby, and a recognisable summoning for those in-the-know. “SECRET GIRL GANG CLUBHOUSE,” it reads. From here, a polite queue snakes down the cobbles and under the railway arch. Shaved heads, pink tresses, mod cuts, beards and beanies: men and women of all ages, from all walks of life, chatter excitedly until the clock hits 3pm and the vault-like door creaks open. Applause erupts, e-tickets are relinquished and feet quickly shuffle indoors. Where the hell am I, and what is this exactly? Taking a deep breath, I follow the ’90s stereo blare of Skunk Anansie into the darkness under the railway tracks. My first all-women’s pro-wrestling encounter is about to begin.

I’m not the only person to stumble into EVE’s underworld, the UK’s first feminist-punk-rock wrestling promotion, inspired by Netflix’s recent wrestling comedy GLOW. As I stand awkwardly, beer in hand, at the back of the Resistance Gallery (a fully licensed arts bar, performance and gallery space in the creative heart of London’s E2) a flash of red hair and fishnets gives actress Kate Nash away in the front row. “We owe a lot to GLOW,” says EVE co-founder Emily Read. “And I love that the cast fell in love with wrestling.” Nash certainly did. It’s why she’s here this afternoon; yelling, laughing and booing as wrestler Charlie Morgan, clad in a baseball shirt, baseball cap and Lycra two-piece, aerial slams her opponent before mime-flicking her crotch sweat into the crowd. 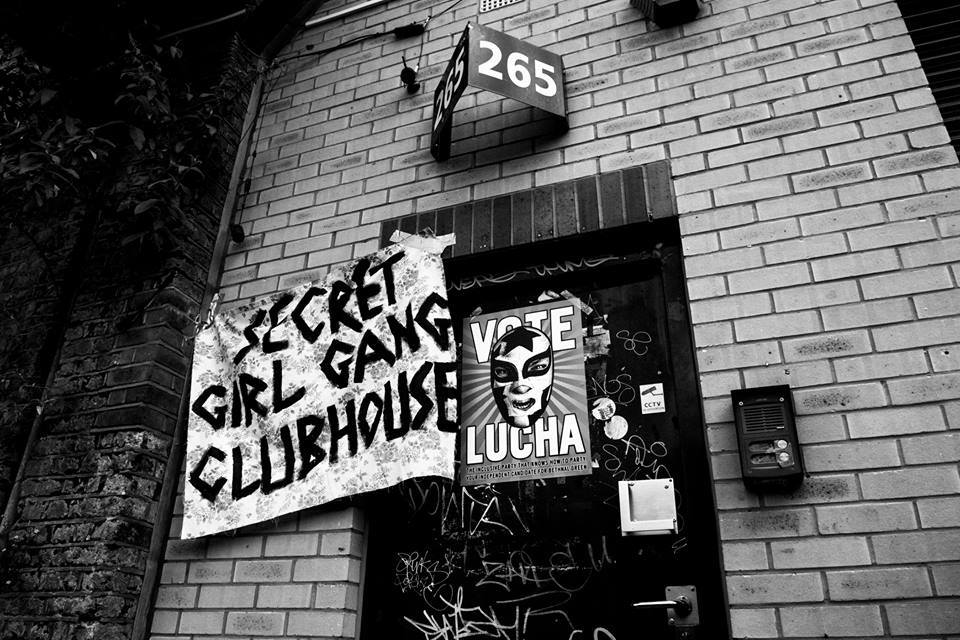 “EVE is the real GLOW,” Nash tells me as audience members politely ask for selfies after the show. As soon as she heard about it, she wanted to check out the London underground scene for herself. The Brit popstar plays one of 12 LA misfits in the smash-hit series and she subsequently got hooked on the sport after filming wrapped up. “Wrestling has taught me to be an advocate for myself and to feel good about my body,” she says. Since Read tweeted Nash, signposting her to EVE, she’s been down three or four times this year. “It’s sick!” she grins – and she means it. Her playful interactions with the real wrestlers this afternoon, watched on by excited fans, only adds to the theatre.

Alongside the laughter, comical costumes and sensational stunts, EVE is here to flag some serious, systemic gender inequality and fight it head on. Emily Read created her all-female wrestling event in 2009 with the help of her husband Dann, in a fit of anger. “I set up EVE because women were not being given the same opportunities as men,” she says. The reality that she encountered as a 19-year-old trainee wrestler was a far cry from what she’d imagined as a young child. Read fell in love with pro-wrestling when she was six years old, watching matches with her dad on the TV. The pantomime narratives appealed to a young bookworm with an active imagination. “It’s heroes and villains,” she explains. “I immediately latched on to the stories.” By the age of 13, Read knew she wanted to inhabit the comic book world of triumph and tragedy. What she was unprepared for, however, was the sexism that would be lobbed at her along with the forehand chops. 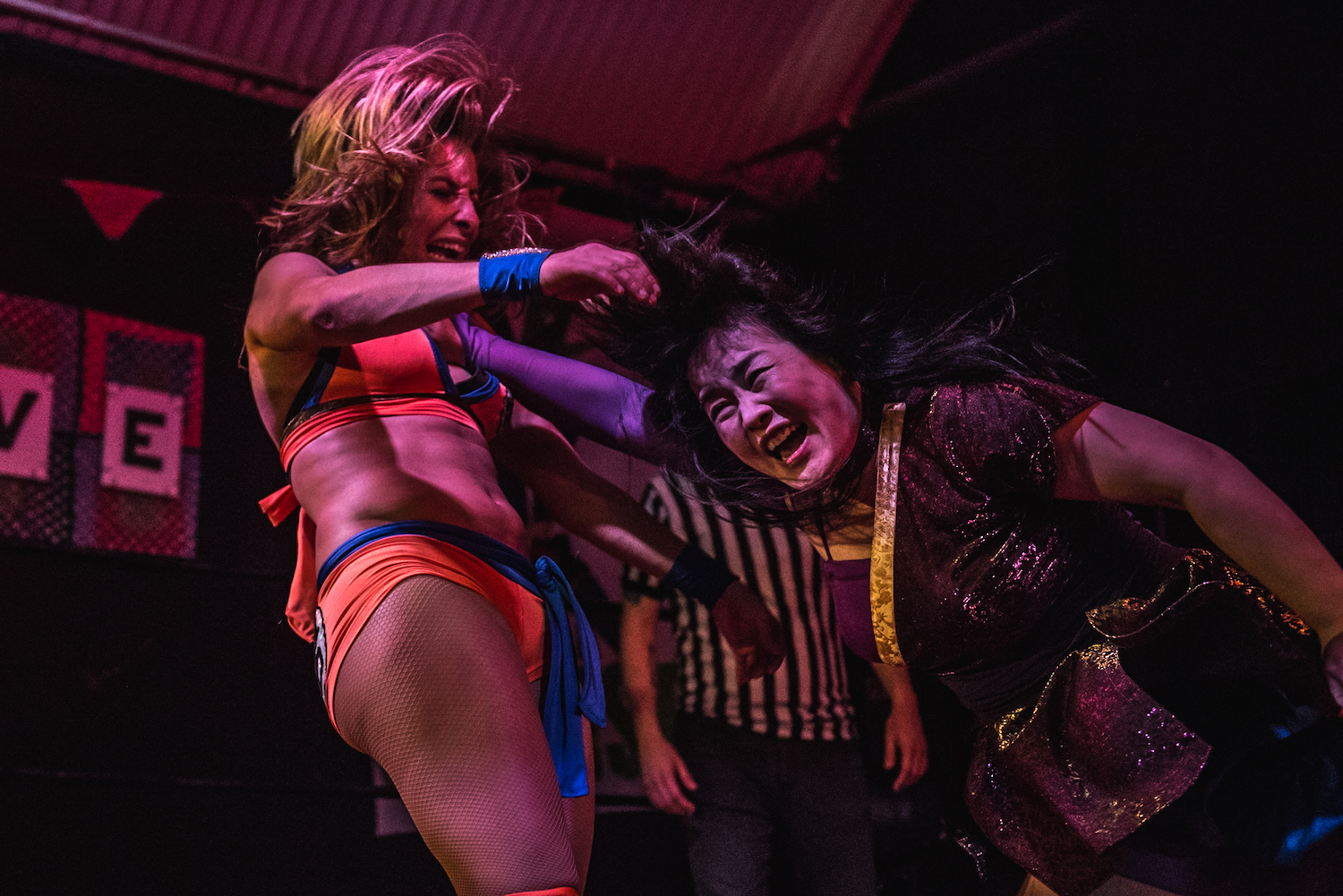 When Read first started training In the early noughties, women were merely titillating props compared to their male counterparts, only coached to levels deemed “good enough” for a female wrestler. Even in the ring, Read tells me, audience members would be encouraged to laugh off a woman’s performance as a comedic interlude. “It was dreadful,” she says. “Sexism was rife at that point in time. I’m pleased it’s not like that anymore.” Like what, I ask? What kind of specific sexism did she experience when she trained? “I was told that wrestlers had dibs on you,” she says. “It was generally accepted that wrestlers could sleep with you. I was encouraged not to learn certain moves because it would “show up” the guys. I’m a tall woman and I was told I couldn’t fight certain matches because I made some men look weak.”

It’s toxic insults like “fight like a girl” that EVE is on a mission to reclaim. Towards the back of the wrestling ring, a merchandise stand sells “support your local girl gang” badges, stickers and t-shirts. Above the ring itself, a banner reads “FIGHT LIKE A GIRL” amidst the bunting. “Why is that an insult?” Read asks. “Throughout history, women have proven themselves to be strong and formidable yet still this phrase came along and was used to mean ‘weak’.” The wrestling ring, Read tells me, is the perfect place to take back this phrase. “We actually show people what it looks like to fight like a girl,” she says.

And by people, she means both women and men. EVE isn’t a female-only space and it isn’t about eradicating the male gaze. The Reads are determined to redefine what that gaze means. “It’s not about the men coming and ogling,” Emily says, although she admits that they get someone who occasionally yells something inappropriate. “They’re easy to spot,” she tells me. “They are removed. That’s not who the show is for. If you want to watch women wrestling in oil, there are places that do those shows.” Suffice to say it’s not EVE. “It’s not what we are,” she says. 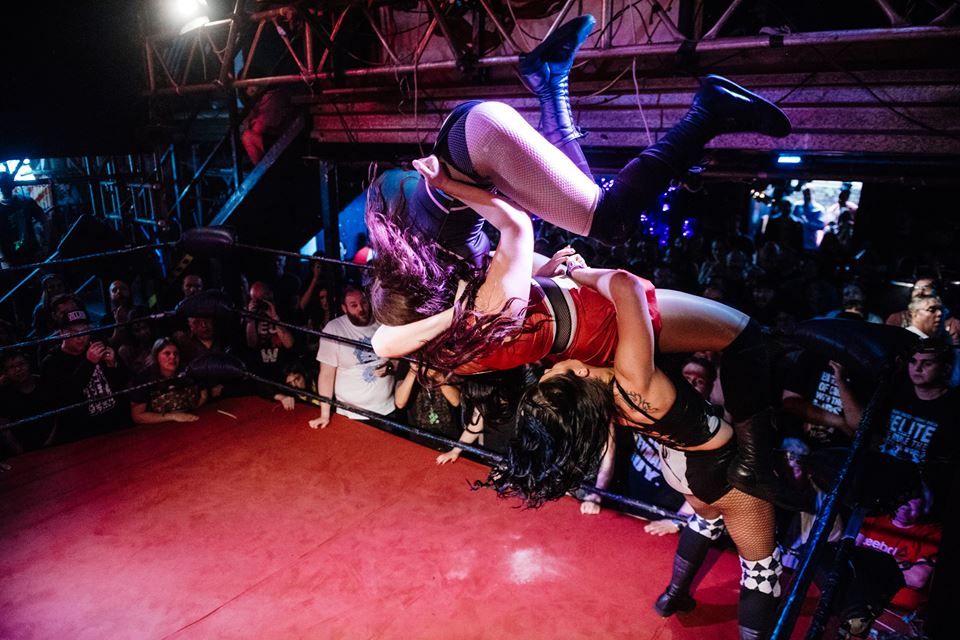 EVE is riding a wave of popularity right now, touring theatres, leisure centres, and town halls; returning to its east London location every two months for weekend double bills. Due to increasing demand, it even broadcasts shows on internet pay-per-view. But for Emily Read, this isn’t just business – it’s personal.

“Every show I feel stronger,” she tells me. In 2012, the promotion was put on hold when Emily was hospitalised under the Mental Health Act. It’s not something she shies away from, especially when she compéres in front of the EVE crowd. “I thought if I wasn’t going to feel ashamed then I should be able to talk about it,” she says. In fact, the first time she spoke about her mental health in the ring, she received so many messages afterwards, it fueled her. “Seeing our roster and fans feel empowered has helped me to feel empowered,” Read explains. “ I still am bipolar. I always will be – I have a chemical imbalance in my brain. But, it makes it a lot easier to cope with when you can talk about it.”

Honesty and passion are what makes pro-wrestling EVE feel so unique. In addition to tackling preconceptions about women’s wrestling, it’s equally committed to advocating fourth-wave feminism and challenging the silence that engulfs mental health. This is a 21st century Shakespeare’s Globe for Corbynista-chanting activists as much as it is for pro-wrestling aficionados – and Emily Read is leading the charge. “I’m literally living my childhood dream!” she says, eyebrow raised. “Who gets to do that?”

Linkedin
RELATED ARTICLES
OTHER ARTICLES
The photographer reflects on building trust with his subjects and using the street as his studio.
The musician, DJ and founder of Monika Enterprise reflects on a career defined by revolution and rule-breaking.
From the queues outside to the last ones standing, Francesco Mellina’s new photo book follows a night that has gone down in the Northern-Soul history books.
Ahead of the policing bill reaching its final stages in the Lords, protestors came together to rally against the legislation.
Those set to be impacted by the governments ’undemocratic’ bill explain why it risks silencing them.
In 1984, Martin Shakeshaft set out to document the miner’s strike as it really happened, using his photography as a tool for activism.