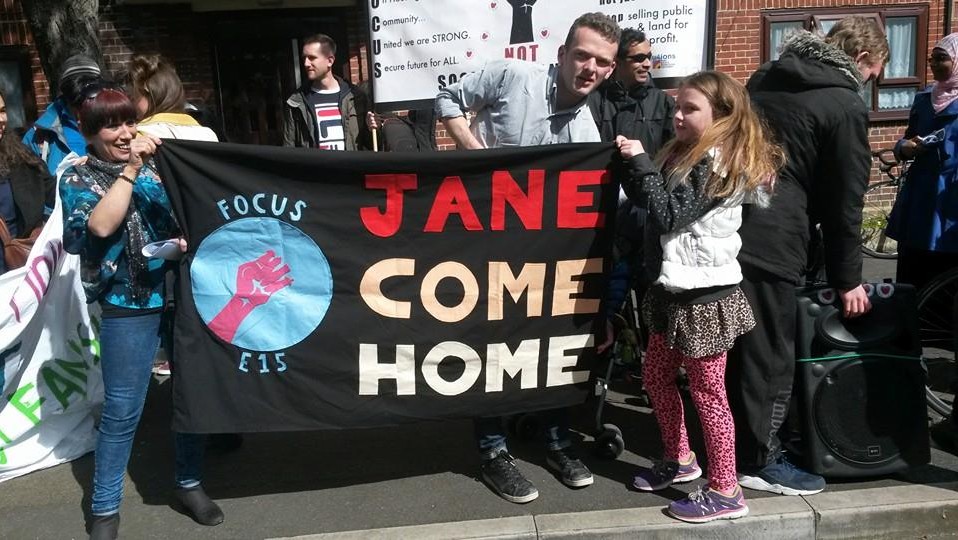 Newham’s Focus E15 campaign have stepped things up with a new occupation, while on Sweets Way in Barnet residents face eviction any moment.

Newham’s Focus E15 campaign have stepped things up with a new occupation, while on Sweets Way in Barnet residents face eviction any moment.

With just weeks before the UK general elections, the battle over London housing shows no sign of easing up. Two of the most important campaigns, Focus E15 and Sweets Way Resists, have entered important new phases.

Sweets Way residents have been handed High Court eviction notices but have occupied another home on the development site to continue their struggle, while the Focus E15 Mums have occupied Jane Wood’s former home after she was evicted by Newham Council for rent arrears last month.

In March, Huck reported that residents of the Sweets Way estate in Barnet, North London had occupied 60 Sweets Way and turned it into a social centre and creche to resist plans by property developer Annington to bulldoze the roughly 160 homes on estate and build luxury apartments. On Monday, April 13, the remaining residents face eviction any moment, following the issue of High Court bailiffs notices, which are illegal to resist.

Children have gone to school today, not knowing if their homes will be there when they return.

At the same session where the court ruled to evict all residents, they also imposed an injunction against any future protests taking place on the site – a worrying development for housing activists elsewhere in the capital.

“On, Friday Annington Homes sent all the remaining residents notice that the County Court possession orders against each of their homes had been moved to the High Court without their knowledge and without hearing,” explains Liam Barrington-Bush of the Sweets Way Resists campaign. “High Court bailiffs means no advance warning and they are legally allowed to use force to enter the premises, which is obviously terrifying to live. You don’t know when it’s happening and they can kick down your door.”

As of writing, bailiffs haven’t arrived on the estate but could do at any moment. The remaining residents have been offered temporary accommodation by Barnet Homes. “It seems at this point, while we’re incredibly glad that the families have the immediate stress off their head,” Liam explains. “We’re all still aware that this is a last ditch attempt by Barnet Homes to avoid the kind of the worst publicity possible by not rehousing these people somewhere in a moment of total crisis, created by Annington Homes.”

Unperturbed by the court decision, Sweets Way residents have occupied another empty house – outside the protest exclusion zone but inside Annington’s proposed ‘Sweets Park’ development – at 76 Oakleigh Road North and have created a new social centre as a base of resistance against the redevelopment. 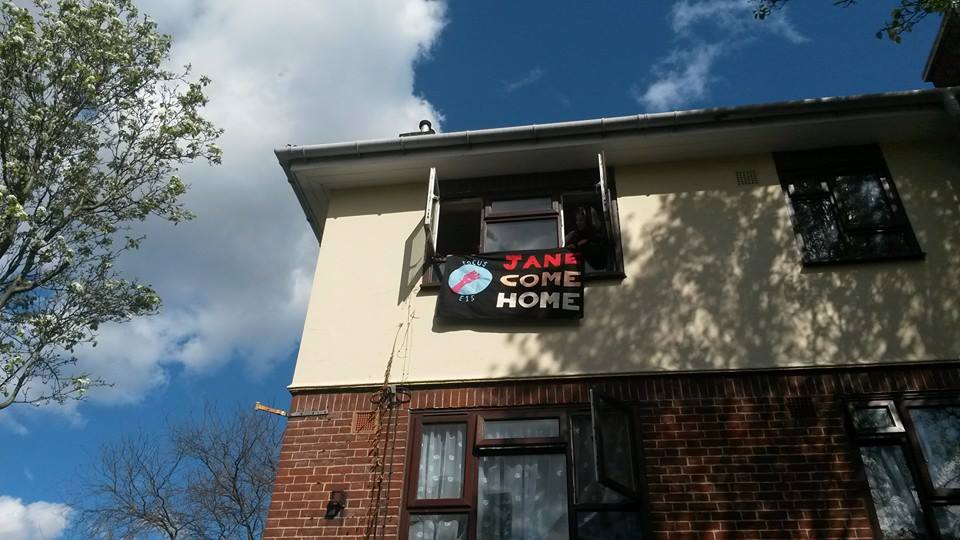 In East London, the Focus E15 Mums have occupied Jane Wood’s former home to protest against her eviction by Newham Council, after their successful occupation on the Carpenters Estate in 2014 forced Newham Council to rehouse families in the properties it had previously claimed were uninhabitable.

Jane and her fourteen 14-year-old daughter were evicted in March after she fell behind on rent after the sudden termination of her Employment Support Allowance and a cut to her housing benefit. Jane had been a resident for 20 years and family members offered to pay the £2,569 (five months rent arrears and court costs), but the council ruled the offer came too late. After missing her court date due to a combination of depression, illiteracy and fear, Jane was evicted in late March.

Focus E15 agreed to support Jane by re-occupying her former home, which has lain empty since she was evicted. On the day of her eviction, Jane passed out with stress.

Activists hope to use the eviction to publicise the injustice of Jane’s treatment but also highlight the fact that she is just one of many victims of the ongoing housing struggle in the borough. There are now 5,000 children living in temporary accommodation in Newham, and the number of families has risen by 42% in the last two years alone, according to figures analysed by Labour MP Dame Tessa Jowell.

Analysts at the Centre for Economics and Business Research (CEBR) expect London property prices to fall in 2015 for the first time since they began rising again after the financial crisis. But an anticipated fall of just 3.6% following “years of over-performance” when prices vastly outstripped wages by rising in excess of 10% annually, before continuing to rise again in 2016, will offer little comfort to London families for whom adequate housing is still out of reach.

Keep up with the Focus E15 and Sweets Way occupations.

Linkedin
RELATED ARTICLES
OTHER ARTICLES
The two-day long event returned to London this year, showcasing a spectacular parade, steel bands and Caribbean food.
Birdy Chu reflects on documenting the historic moment in which the territory was formally passed back from the UK to China.
A group of young Palestinians have found temporary freedom in the act of parkour, reimagining wreckage and ruins as a series of high-octane playgrounds.
By turning a real-life crisis into daytime television fodder, TV bosses have once again shown themselves to be completely out of touch with audiences.
Yesterday thousands gathered outside Buckingham Palace after news of the Queen’s death broke.
Rogue landlords are exploiting young and inexperienced renters and leaving them in mental and financial turmoil, reports Niall Hignett.