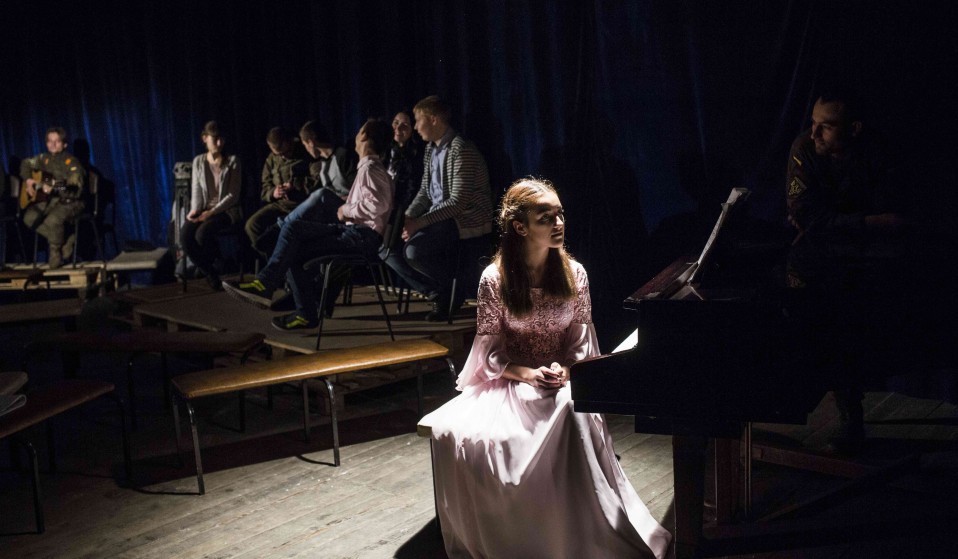 On the frontline between Russia and Ukraine, the small city of Popasna is a place deeply divided: young and old; solider and citizen; separatist supporters and those who are proudly Ukrainian.

On the frontline between Russia and Ukraine, the small city of Popasna is a place deeply divided: young and old; solider and citizen; separatist supporters and those who are proudly Ukrainian. But one theatre company was determined to start rebuilding the fragmented community. This is how they did it.

Sitting on the floor of her bathroom, the safest place in the flat to hide from shells, Ukrainian teenager Alyona Filishtinska feels a raw fear she’s never experienced when her energetic little brother Matviy suddenly falls silent. It’s January 2016 in the small eastern Ukrainian city of Popasna, and these inexplicable silences are even more scary for Alyona than the explosions that shake the streets.

“We had shelling before and after that. But on that day, it was especially hard emotionally,” she remembers. Ten months on, in late November, an audience watches her relive these difficult moments. The now 16-year-old Alyona is telling this story from the stage of a local community centre as part of a new documentary theatre project.

Speaking under the spotlights of an old concert hall, where the Soviet emblem of the hammer and sickle still hangs resolutely above the stage, she shares her fear of war and death with several dozen of her schoolmates, teachers, relatives and soldiers.

She’s not alone: some 16 other teenagers get up to speak through the evening, as do four soldiers who have come to the show directly from the frontline. They’re telling their most memorable, intimate stories, which are predominantly about love and war. Some evoke laughter, others tears, as they open up to this newly formed community. 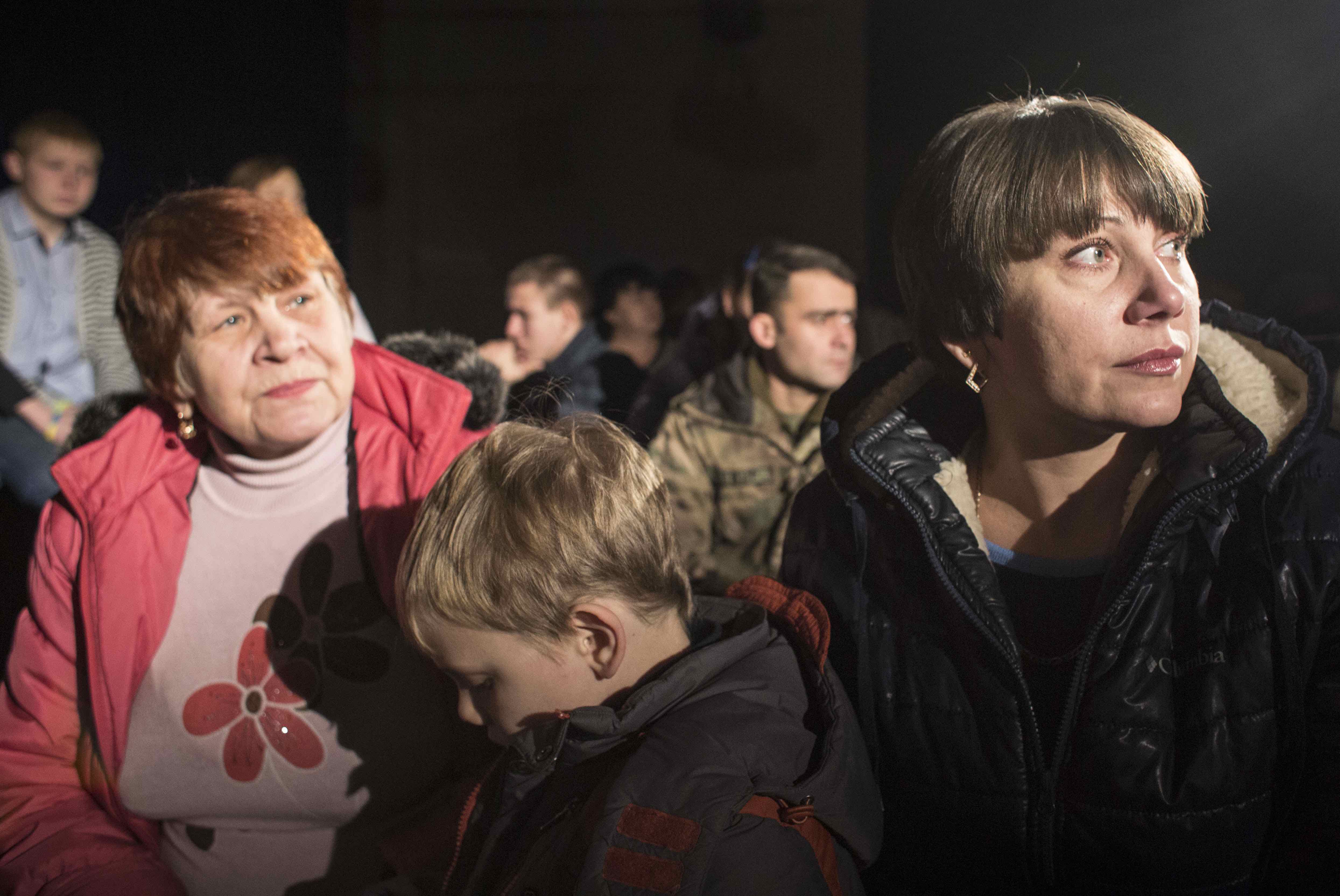 Alyona’s mother, grandmother and little brother are also sat watching, and the eyes of the two women are soon wet with tears. Matviy, now five, is too busy eating sweets to listen to his older sister, his childish innocence still in tact against the odds.

The rest of the audience sit motionless, reliving their own bitter memories of the almost three-year-old conflict, the only active war in Europe, which has already taken close to 10,000 lives. 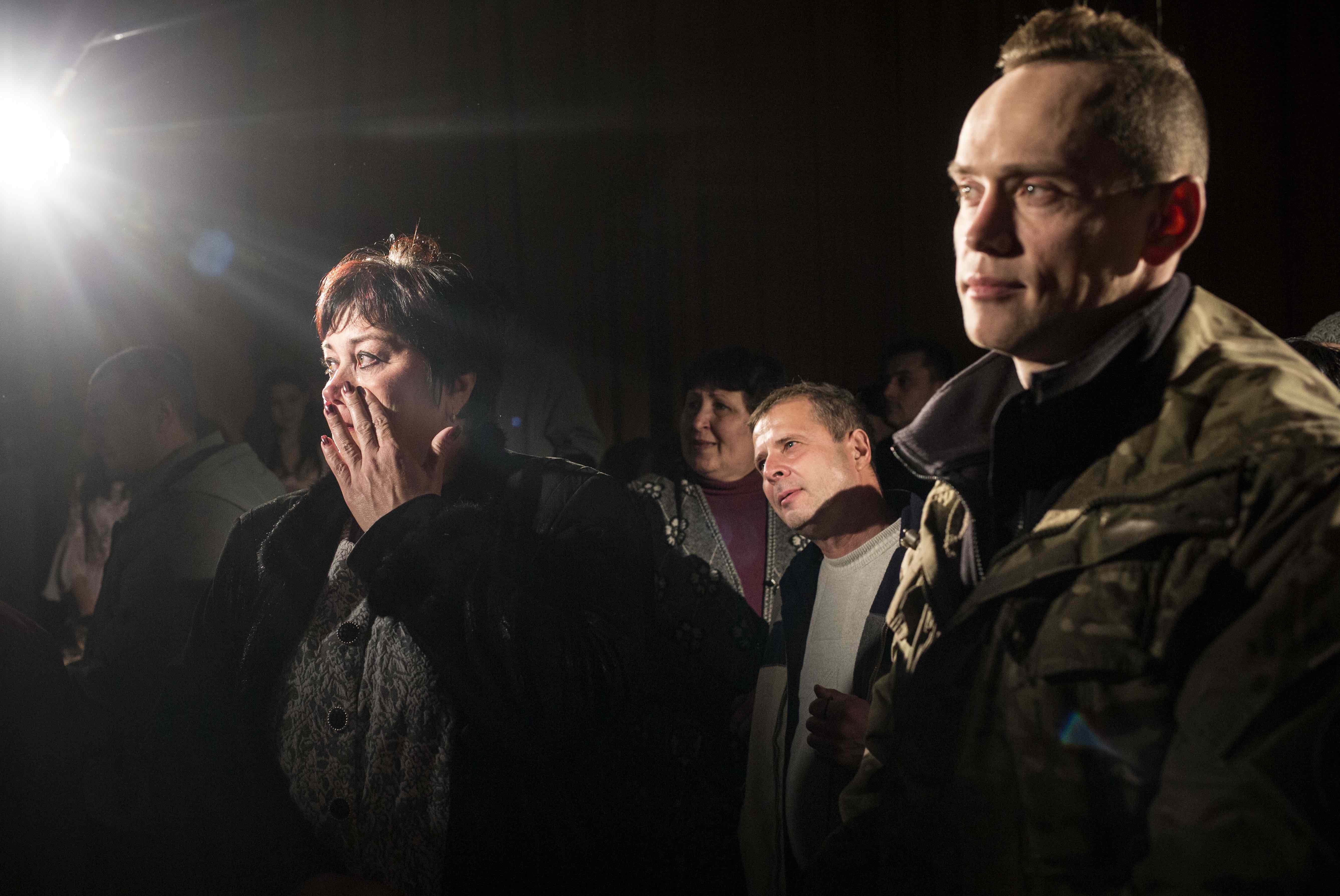 This war started in April 2014, when Russian-supported separatist rallies in eastern Ukrainian’s Donetsk and Luhansk regions culminated with the capture of government offices and the killing of pro-Ukrainian activists. Ukrainian authorities retaliated by sending in troops to restore order, while the Russian government reinforced the separatists with arms, money and serving Russian soldiers. It’s a messy, dirty war, and no side has been victorious.

The last peace agreement, signed in February 2015, still left the war smouldering, cutting off the Russian-occupied area off from the rest of Ukraine.

Popasna, a city of railwaymen with a pre-war population of 22,000 residents, was lost and taken back by the Ukrainian army twice in the summer of 2014. Each time the the capture was accompanied by heavy fighting and indiscriminate destruction.

Throughout this difficult time, Alyona spent day after day hiding in the basement of her apartment building. Her only insight into the political situation – and into who was now claiming control of her quiet city – came from whichever flag was being hoisted defiantly above City Hall.

“One day we got out of the basement and saw a Ukrainian flag. Another day we got out and saw a flag of the Luhansk People’s Republic (a Russian-backed separatist entity),” she tells me now. “I thought that they were just playing games.”

Alyona remembers how the dead bodies of residents killed by shells piled up by the city’s stadium; how the husband of one of her teachers had his head smashed in with a shell while waiting at a bus stop near her school; how the school itself remained closed for months after a shell burned down several classrooms.

Instead, the school became a base for soldiers of the Donbas volunteer battalion, one of the self-organised military units that fought alongside the Ukrainian army.

Life was hard, impossible even. Alyona’s family left Popasna in December 2014, hiding from the war in other cities for six months.

“I’ve always had good relationships with my schoolmates because we all live in one area,” Alyona says quietly, clearly still pained by the ordeal. “But now, after everything that’s happened, we’ve become one for all and all for one.” She sees how her community is fragmented, the scars extending far beyond damage to flesh and walls.

The school was gradually rebuilt and reopened in 2015. Military paraphernalia from the warfare now sits in an exhibition at the school. Even on its reopening, the war mentality continued: students resized camouflage clothing; were educated in how to handle guns; recesses were spent knitting endless camouflage nets.

By the time the autumn of 2016 came around, Alyona – like so many others – was desperate for some respite. She travelled to Kiev to spend several weeks at the Artek children’s camp under a state programme to support children affected by the war. It was here that Alyona fell in love with Dima, a 19-year-old counsellor working on the site. By early December, Dima had travelled to Popasna to see Alyona and her family, although he kept this secret from his parents. 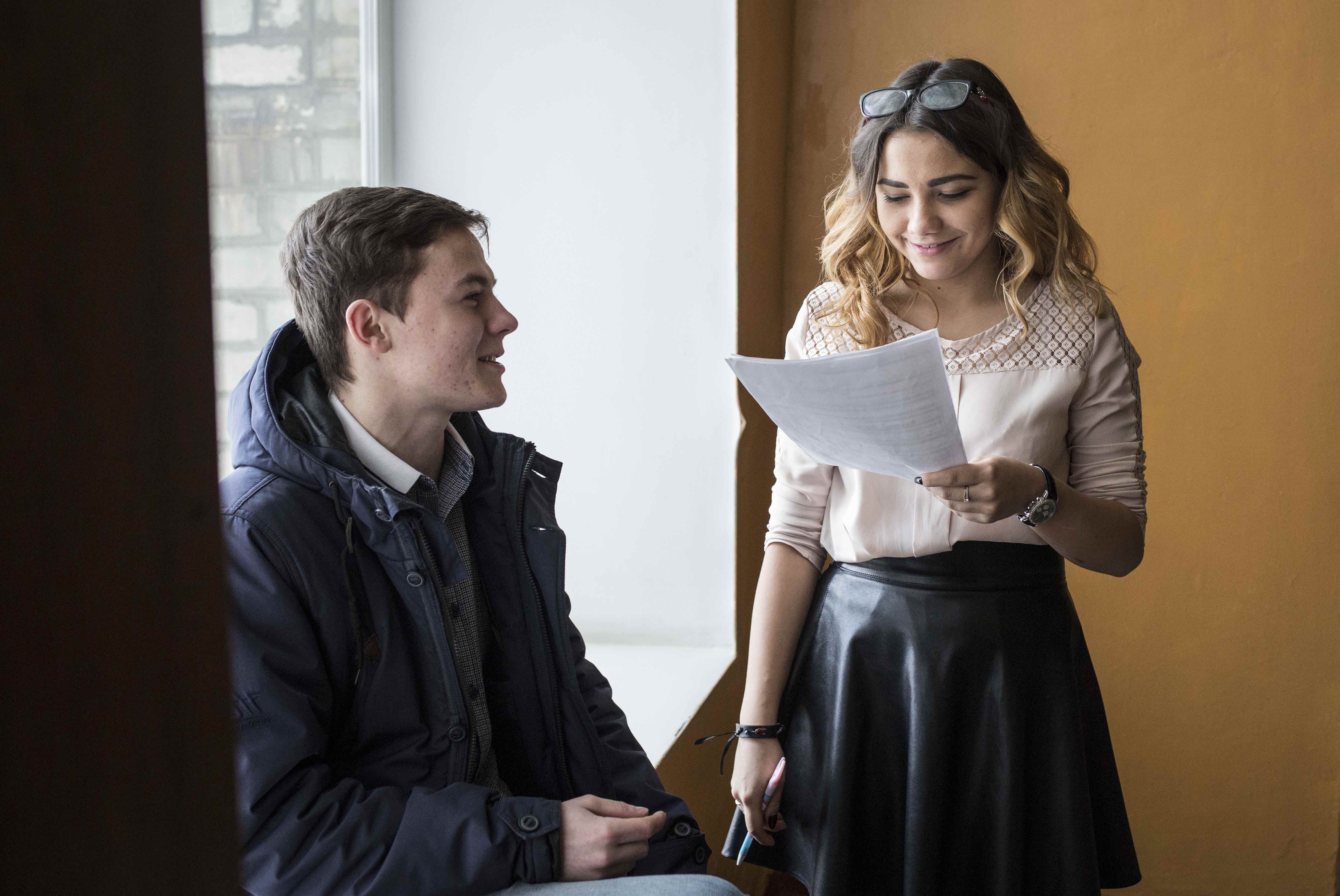 It might be a 700km+ drive from Kiev to Popasna, but it’s not just geography that separates them.

In the Ukrainian capital where Dima lives, most people are understandably afraid to venture close to the frontline. So many wonder how those living there have kept faith through the endless fighting. Not Dima, though. He understands the local culture, having worked closely with children from the war zone. “I’ve seen a 14-year-old boy with grey hair at the camp,” he says knowingly, clutching Alyona’s hand as he speaks.

Seven soldiers arrived at the school in late November 2016. They looked awkward, wandering around the locker-lined corridors, looking for the actors while cracking jokes about which roles they were about to play in the upcoming production.

They seemed even more awkward when Georg Genoux, the German director of the Theatre for Displaced Persons, and screenwriter Natalia Vorozhbyt told them abruptly that they’d be playing themselves, sharing with the audience their most memorable and intimate stories along with schoolchildren. 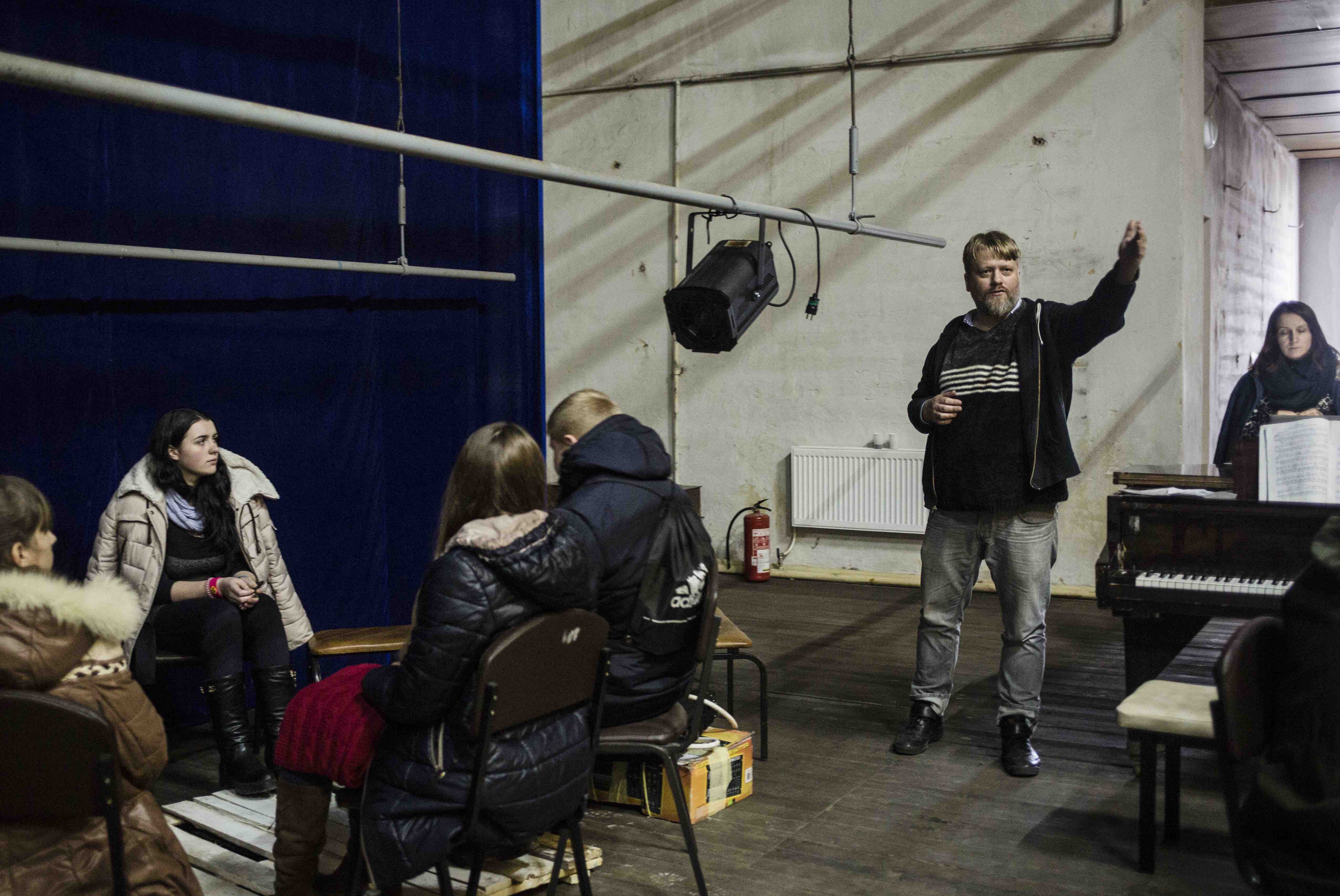 Only four of the soldiers agreed to participate in the project. Marat Mukhitov, a 24-year-old officer of the National Guard, was one of them.

In his story, Marat recalls how back in school he’d been dancing so heartily at a community centre in his hometown of Berezne in western Ukraine that the old wooden floor had collapsed underneath him. As a teenager Murat took classes in folk music and dancing, he and Alyona would go on to stage this waltz for the play. 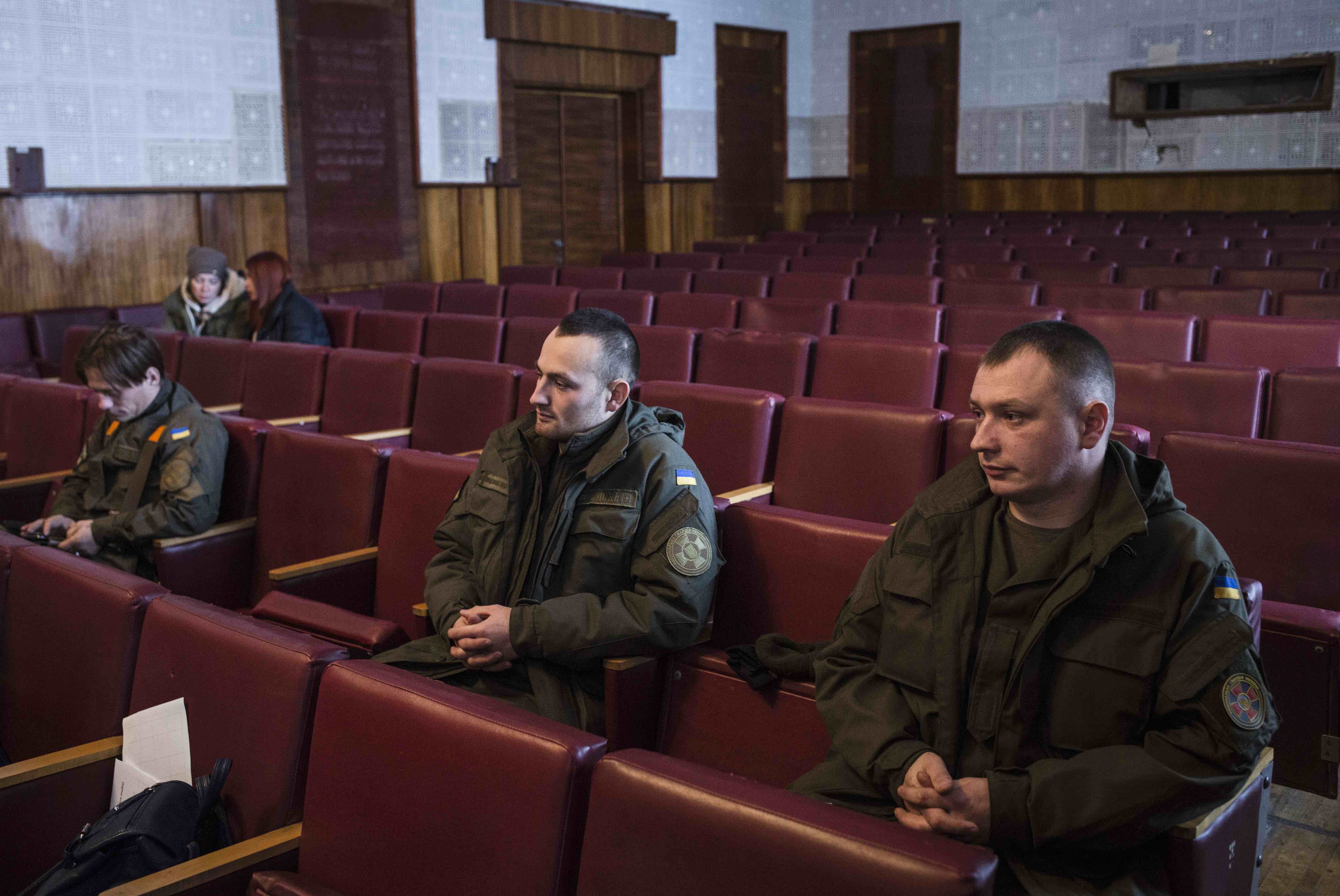 “We have so much dirt in our lives that I wanted to speak about some funny things,” he says, smiling.

Popasna is located just eight miles from the separatist-occupied mining city of Pervomaisk. Before the war, Alyona often rode there on her bicycle across fields to visit her relatives. Now there are landmines in those same fields, and Pervomaisk is the place from which Popasna is often shelled. 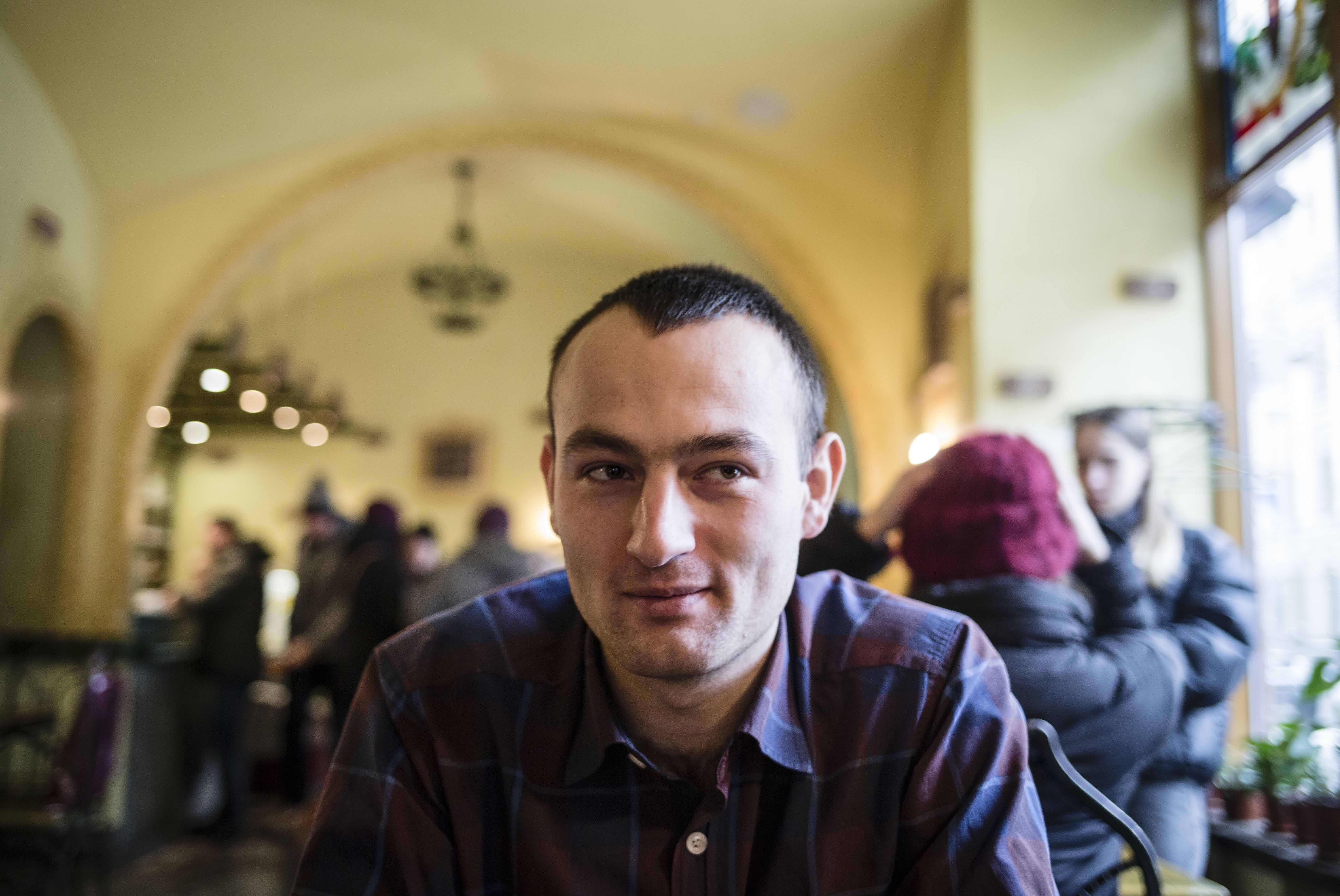 When we sit down to talk in a cafe, Marat thinks back to his time on the frontline, recalling how he watched separatist fighters waving at him from Pervomaisk through binoculars. He doesn’t mince his words; he considers them traitors of Ukraine, but he suspects many older people in Popasna too have pro-Russian sentiments.

He says the local teenagers are different, that’s what he’s learnt from this show. Marat will visit the school many times after the production is over.

Having trained as a military psychologist, Marat sees theatre as useful therapy for children. “It’s important that they release everything that has happened to them through their stories,” he suggests, “otherwise they might just become anti-social.”

Many residents in the city of Popasna, those who walk the wide streets and frequent its decaying Soviet buildings, are afraid of soldiers. Most soldiers speak the Ukrainian language, which dominates in western and central Ukraine, while eastern Ukraine is traditionally Russian speaking. Many soldiers participated in the pro-European EuroMaidan revolution in Kiev, while most locals were opposed to it.

A lot of the city’s residents also have relatives on the separatist side, with many killed during this bloody war. On the day of the show, Alyona’s school displays a photo exhibition with 36 portraits of local men and women killed by shelling.

Alyona, too, was afraid of soldiers before she got acquainted with the four taking part in the play. She was surprised at just how much they had in common with the boys at her school.

The play itself, titled At a Full Volume, interweaves the memories each of the cast with soundscapes, both of creation and destruction: the building of a house, a shell falling hard. What strikes the audience and performers most is how much each has in common, regardless of the language its told in. 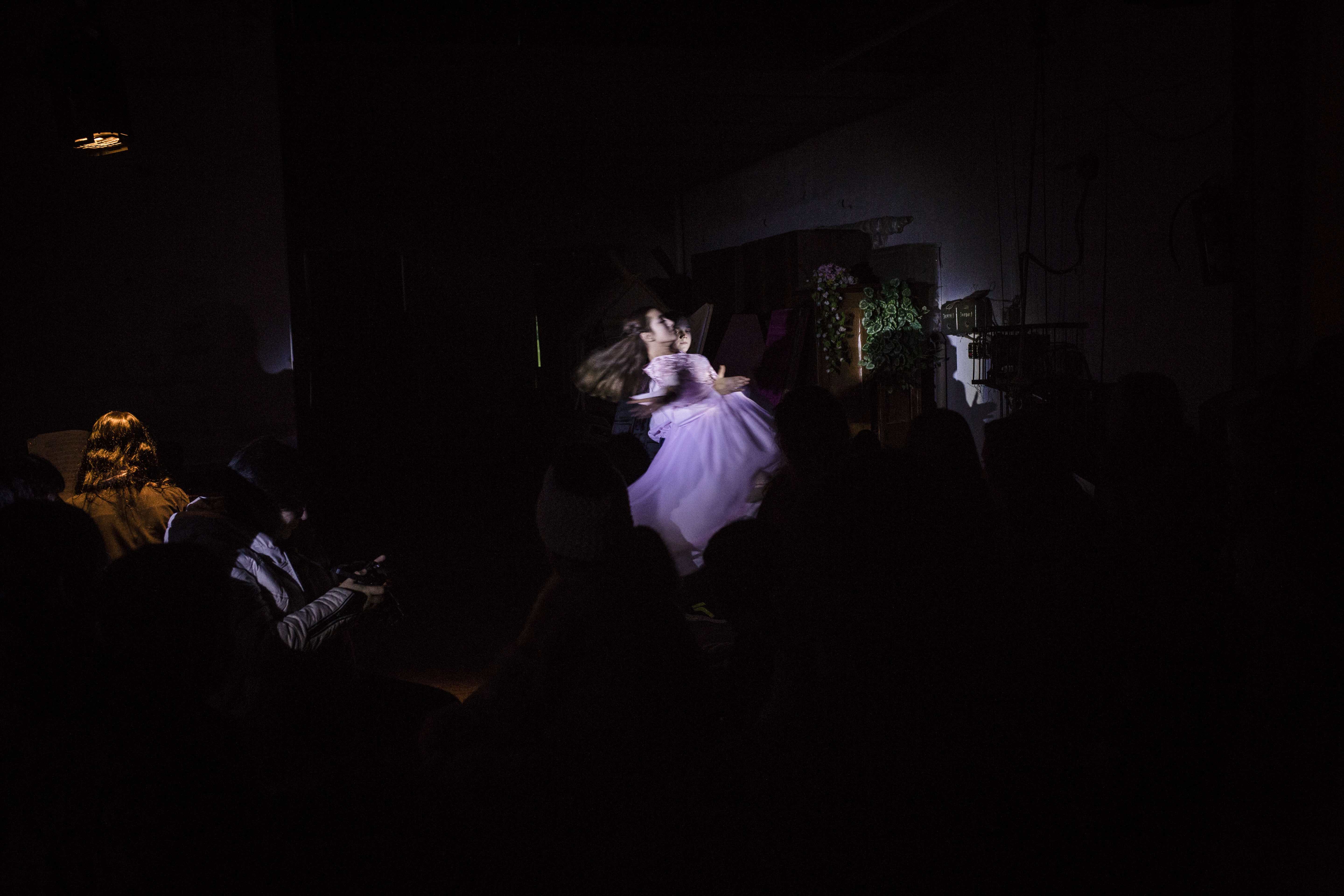 The show ends with a party in a local bar and, the next day, the children visit the soldiers at a checkpoint. The theatre company, meanwhile, has already left to stage similar performances in other frontline cities. There’s a transience to the performances, but Georg, the director, explains how all they hope to achieve is a moment of therapy and reconciliation.

“Theatre is an ideal way to unite people from the east and the west,” he tells me as we speak after the show is over. For the people of Popasna it seems to be working.

Linkedin
RELATED ARTICLES
OTHER ARTICLES
Tristan O’Neill’s shots of dancers caught in moments of reverie at the height of rave’s golden age are a testament to the UK’s legendary club culture.
As she gears up for the release of her first book, the 24-year-old climate activist talks standing up to authority and building a more inclusive movement.
At his West Bank restaurant, Fadi Kattan established himself as the voice of modern Palestinian cuisine. Now, he’s bringing his innovative, bold flavours to the UK’s capital.
A new podcast is opening up the conversation between trans women and trans amorous men in the hope of building coalitions.
David 'Dee' Delgado’s photo project is about honouring and uplifting the city of his youth, and a world rapidly disappearing under the relentless onslaught of gentrification.
Since 2007, Gideon Mendel has made 20 trips to document floods in 13 countries. The result is an alarming record of what has already been lost to the climate emergency.