News & Politics / Activism / The activists getting skateboarders to vote 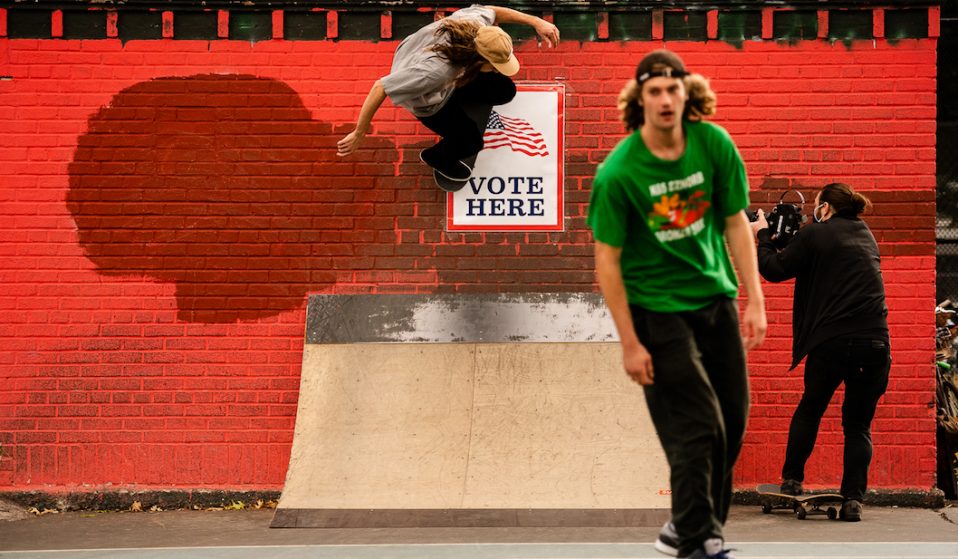 Skaters are rarely thought of as an engaged voters bloc, but a grassroots organisation is seeking to change that.

Skaters are rarely considered a particularly engaged demographic of voters, but this election, a grassroots organisation is seeking to change that.

Skaters Vote is a small, grassroots organisation dedicated to getting skateboarders registered to vote. Founded in 2018, the group has rapidly expanded over the past year, hosting in-person and virtual events and campaigns designed to give skaters – not often thought of as a particularly engaged voting bloc – the tools and information they need to make their voices heard.

Voting in US elections isn’t always easy, in large part because it is in the interest of Republicans to make casting a ballot as difficult as humanly possible. Nonprofit and volunteer-led initiatives to get out the vote are crucial to fighting the uphill battle against voter suppression, and while other organisations focus on simply broadening the electorate, Skaters Vote is laser-focused on the notoriously insular skateboarding demographic.

The idea was hatched by the author Kyle Beachy following the inaugural Pushing Boarders conference in London. The conference is a semi-annual academic gathering of skate nerds from around the world, where skating is celebrated but also put under a critical lens. Panels and talks explore race, gender, architecture, skate media, and skateboarding’s potential as a force for good in the world. 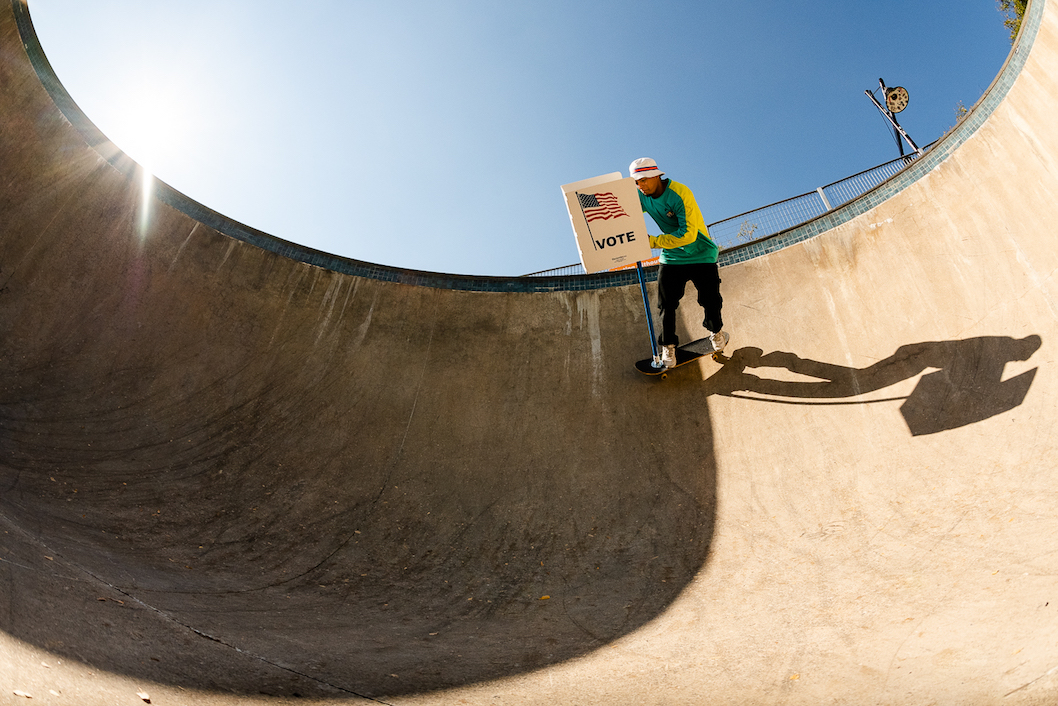 “There’s no way to walk away from those things without feeling like you’re part of the most magical community and framework the world has ever known,” Beachy told me. “So coming out of there it was just a really natural impulse to think, hold on a second, here’s a thing that doesn’t exist and wouldn’t need to be a big thing in order to potentially do some good.”

Beachy launched the initiative with the help of Real Skateboards’ founder Jim Thiebaud. The goal was always to figure out a way to pitch skaters on the idea of voting without being overly partisan or pandering – as though it was coming from a friend at the skatepark, rather than a detached, corporate-sponsored get-out-the-vote message. Then, the thinking went, skaters around the country could take the bones of the project back to their own communities.

Skaters Vote wasn’t particularly active until the writer Anthony Pappalardo (no relation to the pro-skateboarder) got involved in the fall of 2019. “Anthony has come along in the last year and kind of taken it and just radically run with it,” Beachy explains.

Pappalardo has organised numerous voter registration initiatives at skateparks and with New York-based skate shops, and created a vibrant Instagram presence for the initiative, complete with videos from pros and amateurs urging people to go to the polls. The most recent video, released on Monday, pulled out all the stops, with Tony Hawk as narrator and Mark Gonzales skating through the rain reminding people that: “You can vote in the rain, too.”

While it’s slowly become more organised, the entire operation has been a learning process. “It’s kind of funny,” Pappalardo told me. “I feel like I’m doing everything I’ve ever done again as a kid – like starting a band and not thinking about how much it costs to buy a van, or how to make T-shirts.” 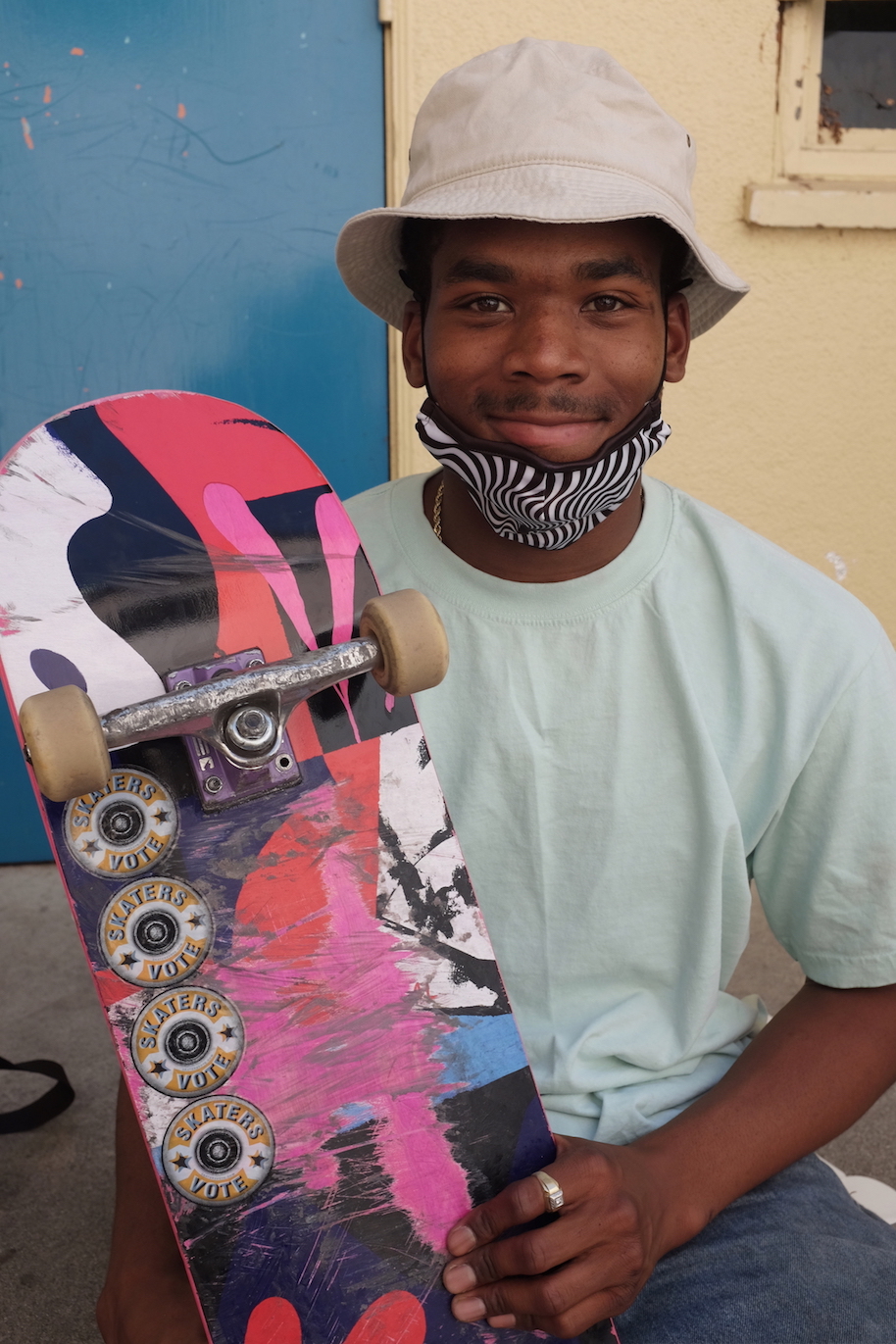 Complicating things further was COVID-19, which hit New York City just as Pappalardo was about to finalise a collaboration with Vans. The collab would have allowed Skater’s Vote use of their massive House of Vans warehouse space in Brooklyn for in-person events.

As the country shut down, Pappalardo began to focus more on digital, including a partnership with Thrasher that led to a full takeover of the site’s ad space with Skaters Vote banners, and Instagram Stories from the magazine’s account devoted to the initiative.

Pappalardo also made a hashtag and a story template and sent it around to everyone he knew in the industry, asking them to post about it. The 24-hour initiative led to a flood of new followers and interactions with Skaters Vote.

“The idea is to have that day every year, or maybe have other initiatives, because I don’t think of this as just about presidential elections. We want it to be an always-on thing, so there will be other takeovers in the future,” Pappalardo says. And while the warehouse event with Vans didn’t work out, the company was still happy to help out, paying for a huge Skaters Vote mural outside Labor skate shop in New York and another outside Atlas in San Mateo.

Part of convincing any demographic to vote involves explaining how the actions of those in power affect them personally. “For people who have never voted or people who don’t understand the political process,” Pappalardo says, “you have to put the hooks into something tangible to get it started.” In the case of skaters, this means focusing on issues like healthcare, drug reform, and uses of public space. Then, once people understand what’s at stake for not only themselves but their communities, getting them activated and registered to vote is a pretty easy sell. 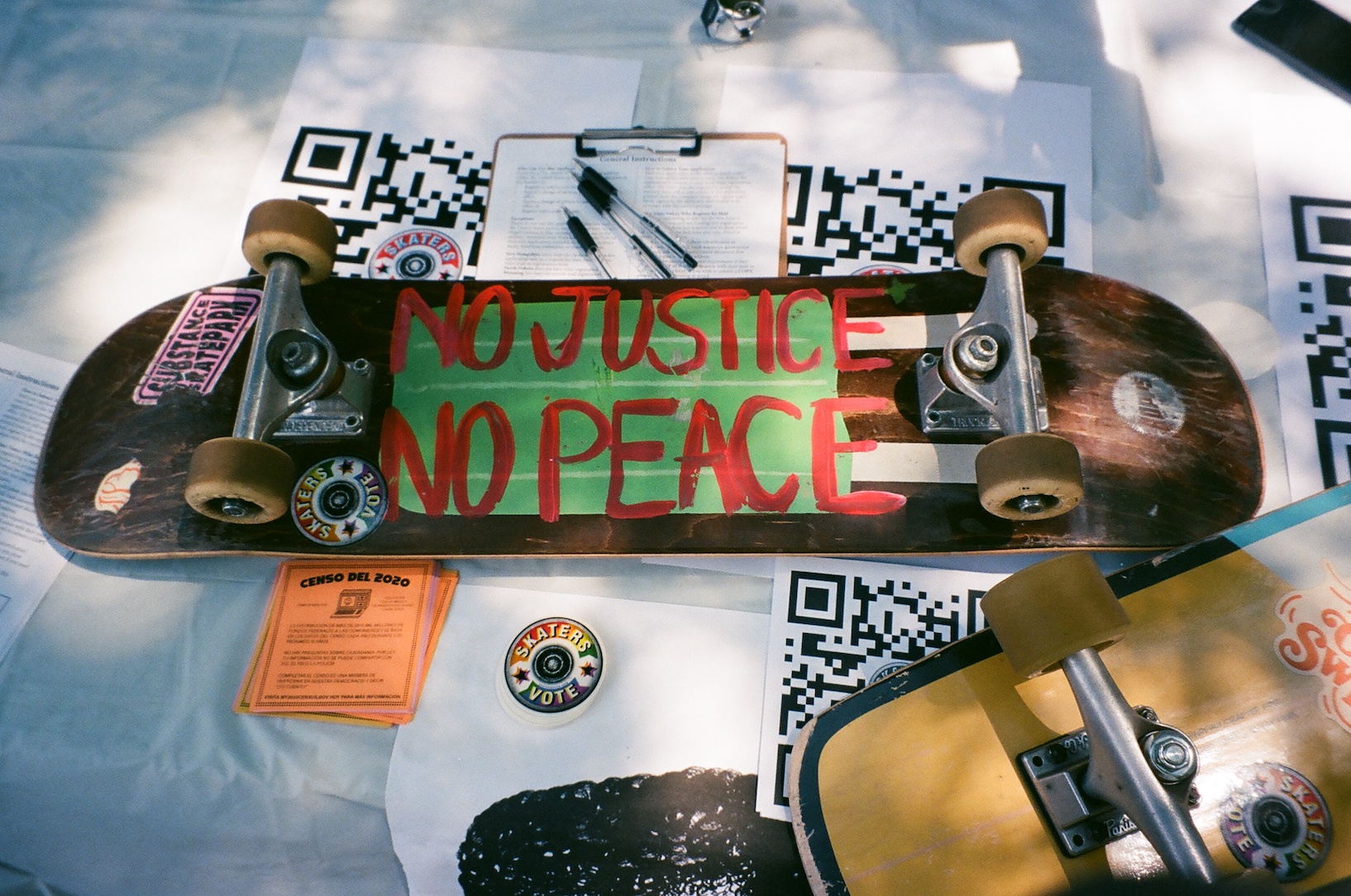 Pappalardo hopes that eventually, skaters around the country will use this template in their own communities. “The idea was this open-source thing where, hey, if voting is important to you in a swing state – for either side, whatever you wanna do  – and you want to print out the materials, you do it,” he says. “If you want to run a Skaters Vote event we just ask that you adhere to the guidelines of decency, you know?”

Over the past few months, as the lockdown in New York has tentatively been lifted and people have returned to select outdoor activities, Skaters Vote booths have been a frequent presence at shops and parks around the city. Unlike some skate brands, which are hesitant to come across as overly political, Pappalardo says “shops are not shy about pulling the trigger on [helping to organise].” He estimates they registered about 80 people at each in-person event, which is impressive considering the relatively small size of the skate community.

Last Sunday, just nine days out from the election, Skaters Vote and the skate shop KCDC set up a booth at McCarren skatepark in Brooklyn. It was a brisk fall day and Pappalardo stood around the table with a few others in masks and hoodies while a lively session took place around them. The registration deadline for voting in New York ended October 9, so they were there primarily to remind people to make it to the polls, and to hand out stickers and Skaters Vote branded grip tape. 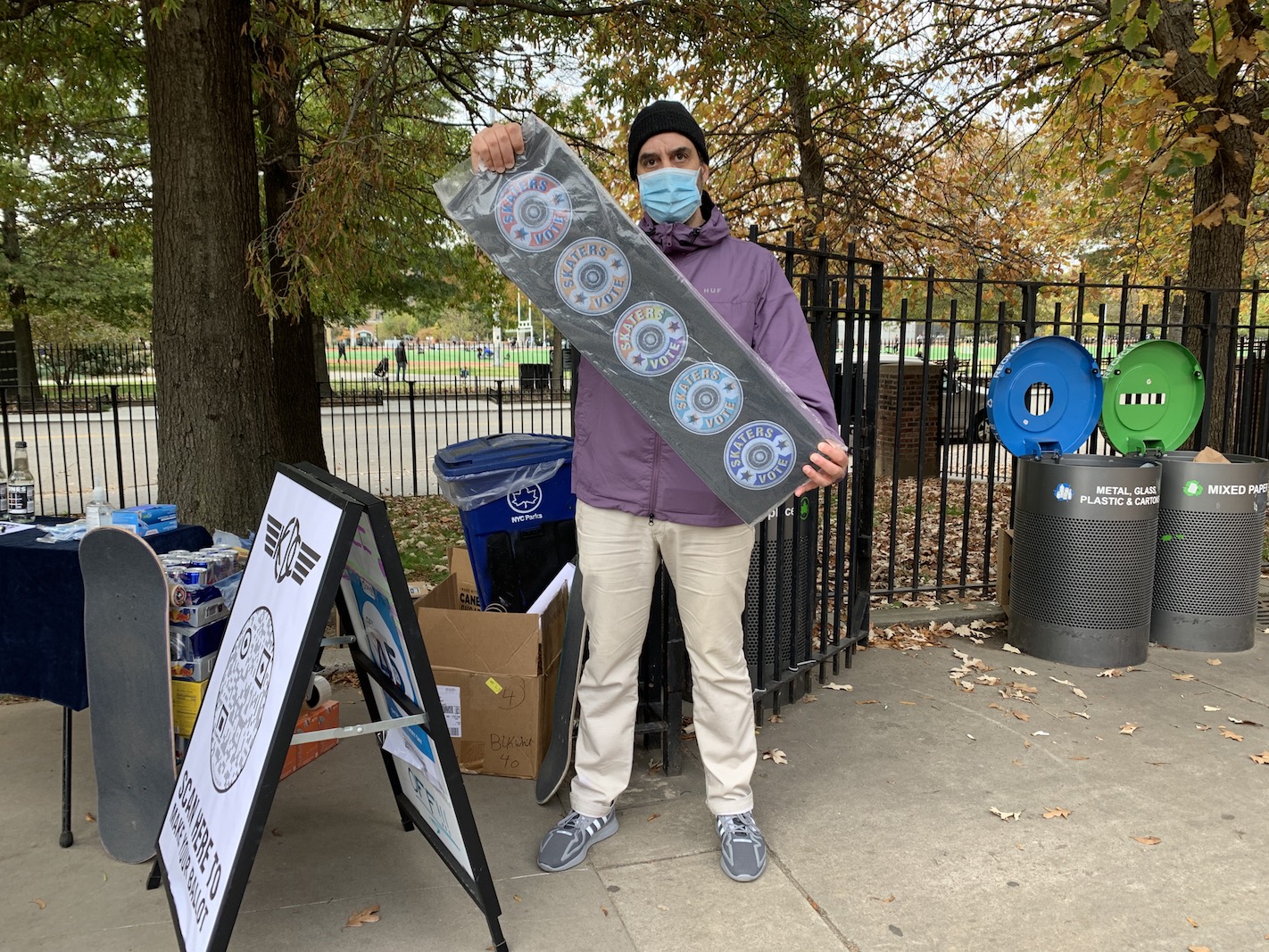 Pappalardo told me after the election Skaters Vote will reassess what exactly its role is moving forward, and how it can best contribute to keeping young people informed about the political process. The past few months have been so hectic, and so much of the “strategy” has essentially been to just build the car while driving it, so taking some time to pause and reflect will be a welcome change of pace.

While the immediate next steps for Skaters Vote are still being figured out, Pappalardo has some thoughts on what the ultimate mission of the project should be. Eventually, he says, “our goal is that every shop knows how to sign up a voter, even if it’s just having a QR code that goes to vote.org, or to our site at their shop.” If they can keep this momentum alive, Skaters Vote could just play a role in creating change for people outside of the relatively insular skate community. 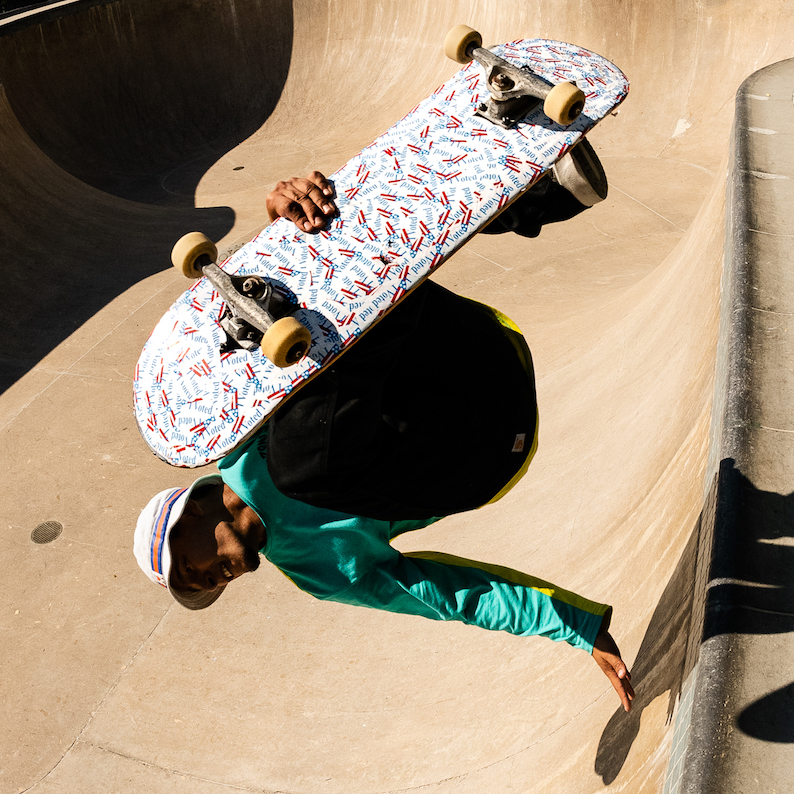 Find out more about Skaters Vote on their official website.

Linkedin
RELATED ARTICLES
OTHER ARTICLES
In the latest OFFF Dispatch, the enigmatic designer dives into his process, connecting the dots between his unique and varied creative output.
While protests over abortion rights rage in the US, access to abortion services is still almost nonexistent in parts of the UK.
From the Yakuza to a biker gang, Bruce Gilden recounts capturing Tokyo and Osaka in the ‘90s.
Our new magazine is here, starring the inimitable Mitski. Order your copy now and join us on a trip around the world.
Following the release of his latest album God Don’t Make Mistakes, the rapper talks horror villains, police brutality and being unafraid to show his vulnerable side.
To mark the anniversary of the mass trespass of Kinder Scout, a group of hikers came together with the intent of creating a new, fully inclusive culture for rural spaces.