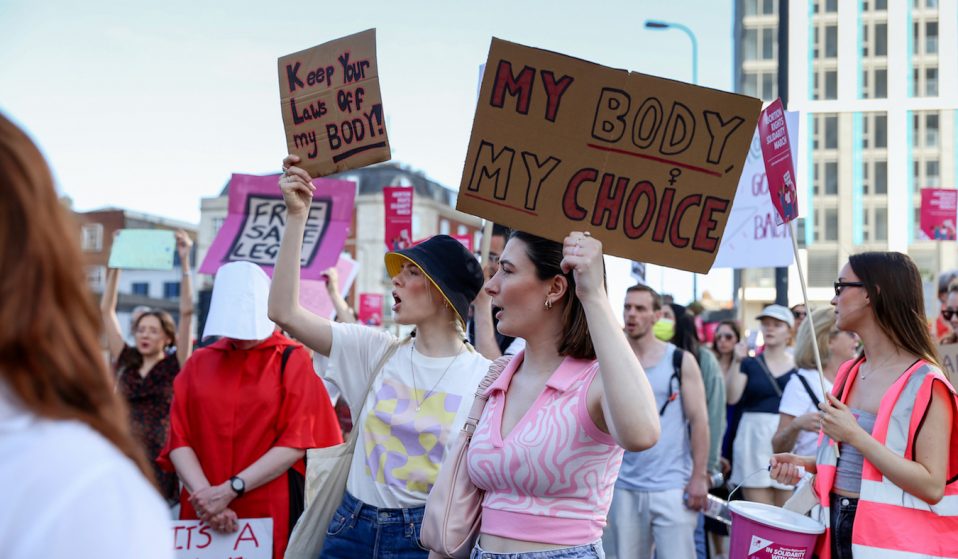 Campaigners are now fighting to protect people from harassment by anti-choice groups as they access abortion care.

The overturning of Roe v. Wade in the US has seen an emboldened anti-choice movement in the UK. Now, campaigners are fighting to protect people from harassment as they access abortion care.

In January 2018, 17-year-old A-Level student Olivia Smith arrived at a Bournemouth clinic ready to take the pill that would terminate her pregnancy at around eight and a half weeks. She’d already been there for her consultation, medical assessment and welfare chat, and provided the lawful written consent. There was no doubt in Olivia’s mind that this was the right decision, but she was still nervous as she walked to the doors of the clinic with her then-boyfriend and mum.

As she walked toward the clinic, she heard a male voice, and a leaflet appeared under her nose. “I can’t actually remember what the picture was,” recalls Olivia, “but I remember it was red, and it was obviously of a murder scene.” That man was part of an anti-abortion group, who were standing right outside the entrance to the clinic on Ophir Road.

When Olivia came back outside after having her abortion, they were still there. One of them asked her if she felt guilty. “It was the only part of the whole experience that I look back on and feel sad and sick about,” says Olivia. Her experience inside the clinic was, by contrast, “kind, supportive and understanding.”

Olivia’s experience is not unique. Anti-abortion groups have been targeting the Bournemouth abortion clinic, which is run by the British Pregnancy Advisory Service (BPAS), for four decades. It is one of the worst affected in the country, but the problem is national: over 42 clinics across England and Wales have been targeted since 2018, according to BPAS. In 2019, more than 100,000 women were harassed by anti-choice groups as they accessed abortion care. 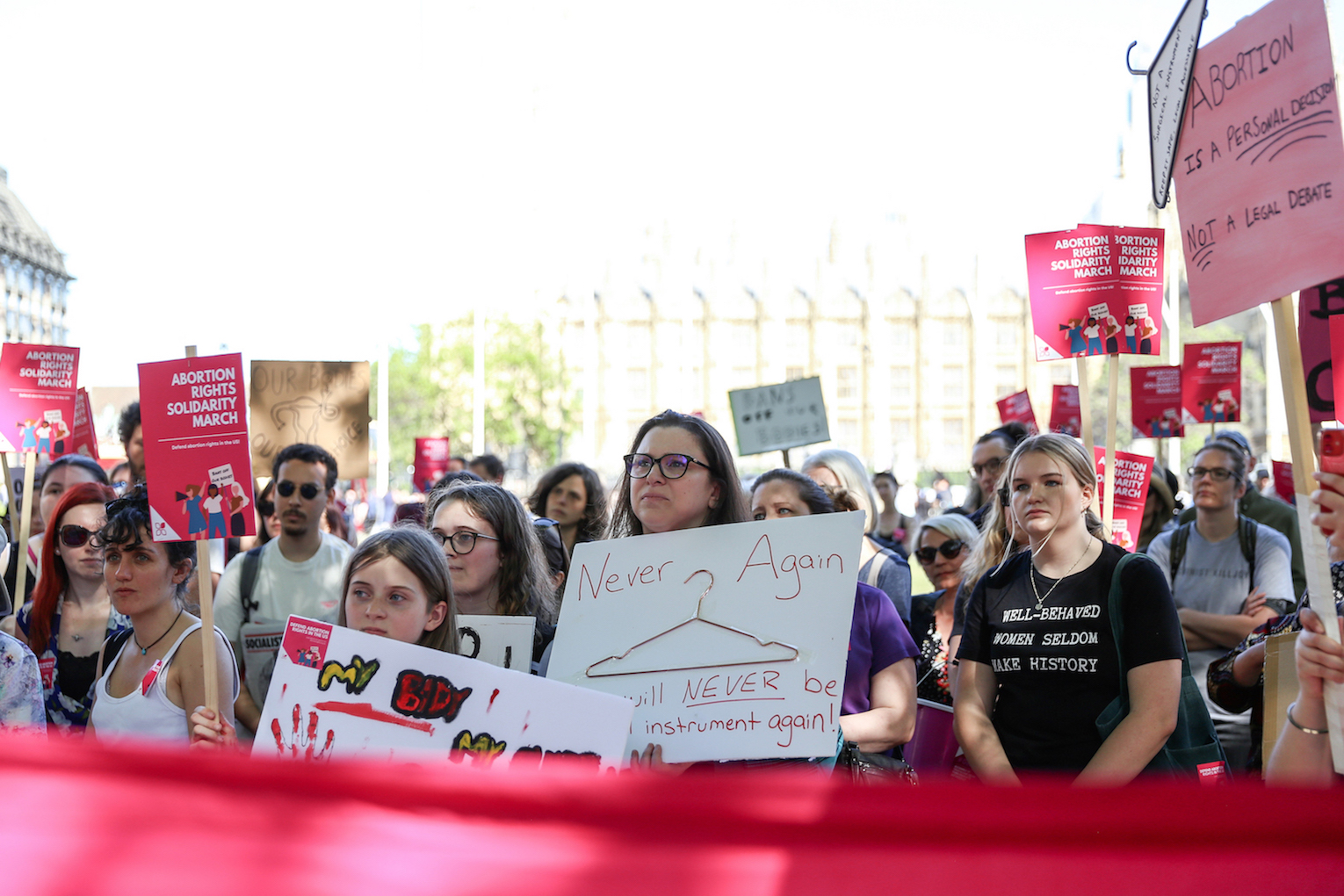 Earlier this year, Huck reported on the newly-emboldened anti-choice movement in the US following leaked documents revealing plans to overturn Roe v. Wade – a landmark 1973 ruling which effectively legalised abortion across the country. And now, with US abortion rights officially overturned, clinic staff and campaigners agree that harassment has increased in the UK. A US-funded anti-abortion group has already launched a mass campaign to stop buffer zones at abortion clinics in the UK becoming law, while Conservative MP Danny Kruger said he didn’t agree that women had “an absolute right to bodily autonomy.” Since the first lockdown last year, four clinics have been targeted for the first time.

Sister Supporter, founded by Ealing residents in response to the constant harassment by the anti-abortion lobby outside their local Marie Stopes clinic, has been campaigning against this since 2015. Within two years, Ealing council introduced a buffer zone outside the clinic. Buffer zones prohibit protests, prayer vigils and so-called ‘pavement counselling’ within a 150m radius of abortion clinics, using a Public Space Protection Order, which is punishable with a maximum of  six months in prison for the first-time offence, or an unlimited fine.

Rachael Clarke, Chief of Staff at BPAS, collects accounts from people who have visited clinics. Standard activity, she says, involves between two to five people stood outside handing out leaflets with false medical information, telling the pregnant person that abortion causes breast cancer and suicidal ideation, and that it means that they won’t be able to bond with their existing children. They might include pictures of foetuses or poems, or read “mommy don’t kill me”.

Protestors follow people, reach into car windows, block clinic doors, and hand out pink or blue rosary beads. “We have a clinic where people leave baby socks in bushes,” Clarke adds. “There is a dizzying array of tactics that are used, but all of them are equally damaging.”

Their presence and words have had a lasting impact on Olivia. She couldn’t sleep for days afterwards, saying it made her question what she’d done. “Even though I knew I’d done the right thing and that it was my choice, I was emotional,” she recalls. “​​I remember speaking to my mom about it and just crying and crying because I felt a bit ashamed that they’d seen me.. and that they’d said all these things to me.” Now age 22, Olivia doesn’t feel ashamed. She feels angry. “I’m at uni now, I live in my own house. I wouldn’t have achieved anything [if I hadn’t had an abortion],” she says. 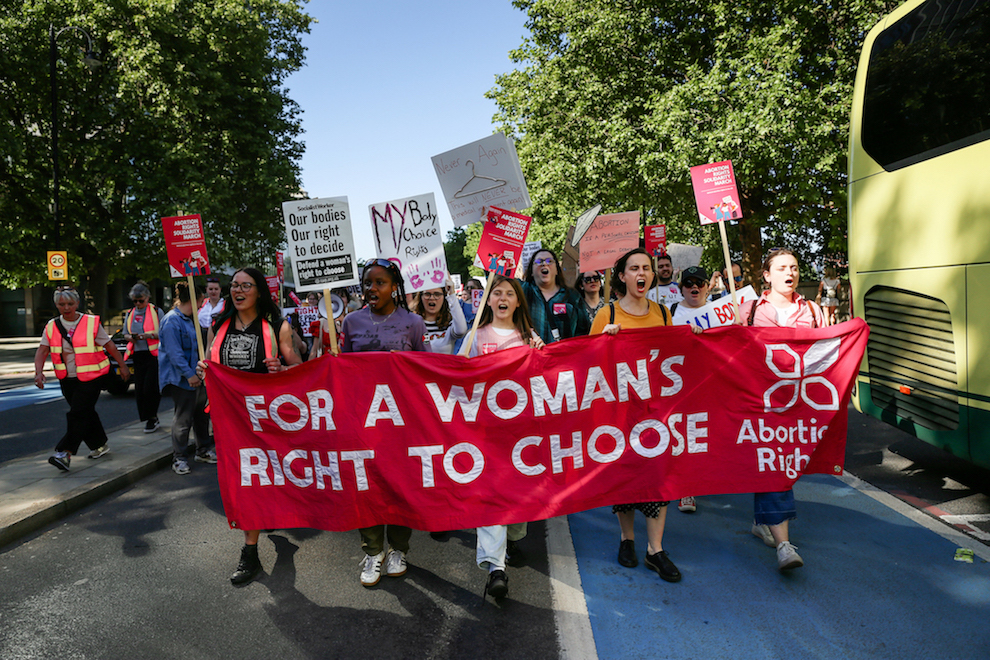 Sister Supporter campaigner Tanya Taylor, 31, tells Huck that this story rings true for many people accessing abortions. In almost all of the testimonies they receive, people say they have PTSD years later, not because of the decision to have an abortion or the procedure itself, but because of the presence of the anti-choice protestors.

As these threats grow, the fight on the ground has intensified. In Scotland, Glasgow’s Green MSP Gillian Mackay councillor is campaigning for buffer zones in response to a rise in anti-choice protests. So far, only three local authorities have Public Space Protection Orders (PSPO) in the UK: Ealing, Twickenham and Manchester. This creates a postcode lottery, which is why campaigners like Rachel Clarke are demanding blanket abortion justice. Clarke is pushing for amendments to the Public Order Bill, which would introduce new legislation for national buffer zones.

There’s proof that buffer zones work. Before the buffer zone was introduced at the Ealing clinic in 2017, Sally O’Brien, Senior Operations Manager at MSI Reproductive Choices, saw anti-choice protestors outside every day. They’d show service users small plastic foetuses and tell them that their babies would go through a meat grinder. Staff were also called murderers and had salt thrown at them. “Their intention was to block the protesters from actually getting to the clients,” O’Brien says. “It was a fraught time for everyone. When the PSPO came in, all of that was eradicated.”

However, local PSPOs aren’t a flawless solution. They have to be renewed every three years, and the legal process is lengthy and costly, as buffer zones are subject to judicial review, explains Louise McCudden, Advocacy and Public Affairs Advisory at MSI. “Not every council can absorb the knock,” she says. “The other thing is it’s not a national solution and it’s a national problem. Your right to access an abortion safe from harassment, alarm and distress and in privacy shouldn’t depend on where you happen to live.” 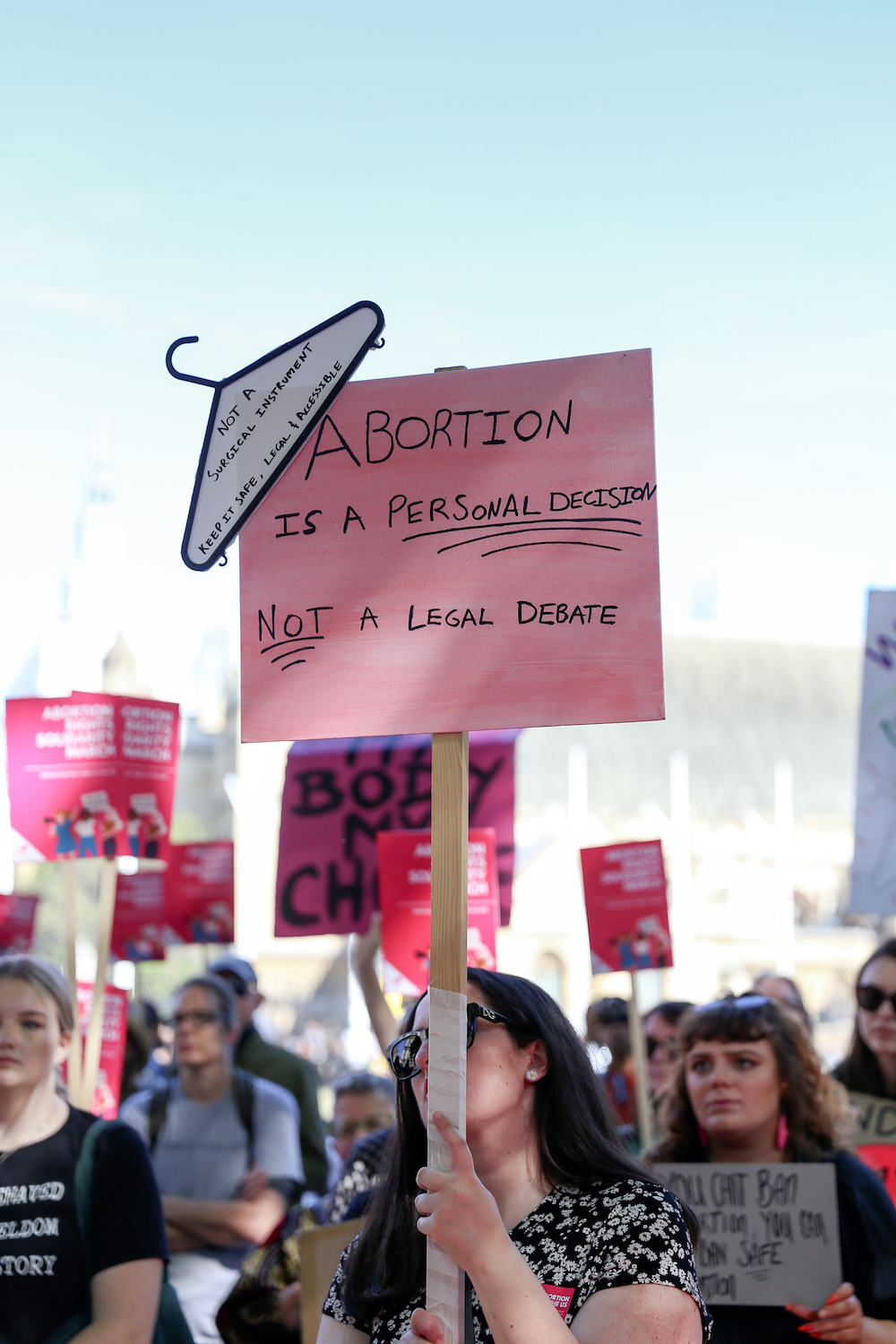 On 20 July, Bournemouth Council is launching a six-week-long public consultation on options for a PSPO. They voted unanimously for the consultation in a meeting, which was prompted by a Sister Supporter Bournemouth petition that drew 4,000 signatures (petitions needs over 3,000 to be debated by a full council). Sister Supporter campaigner Jess Bone led the petition, citing “grotesque and abusive behaviour” from “anti-abortion hate groups”.

The only vocal opposition during the meeting came from one anti-choice protestor, who Bone often sees protesting outside of the clinic. They said: “If politely offering an information leaflet is called intimidation and harassment, then we cannot offer a pregnant woman a real choice.”

This argument, that buffer zones are violating a right to free speech, is a dog whistle that flattens reality. “There’s no shortage of anti-choice opinions if you want to hear them, but you shouldn’t have them forced on you while you’re accessing care,” McCudden says. “We need something to protect the women and anybody else accessing the services from this harassment.”

O’Brien seconds this. She says that rather than the PSPO, anti-choice groups were offered the right to stand opposite the clinic, rather than directly outside. “They could hold up a banner that said, ‘We’re here to offer you help and guidance, if you need that come and speak to us’, and they rejected it,” O’Brien explains. “They did not want to do that, because they knew that it would not suit what they actually wanted to do, which was to bar people from entering the clinic.”

Buffer zones aren’t going to extinguish the anti-abortion movement, but they can protect people from potential trauma while accessing life-saving healthcare. Progress has been frustratingly slow, but campaigners aren’t letting politicians sweep this urgent issue under the rug.

Linkedin
RELATED ARTICLES
OTHER ARTICLES
A new series of photos by Johny Pitts shines a light on communities and subcultures that have all too often been overlooked.
Yesterday, rail workers came together to protest poor pay, working conditions and job cuts in their latest round of strikes.
Steel City is often overlooked when it comes to the country's cultural radar despite its role in shaping electronic music.
With the UK now set to run out of vaccines, people working in the sex industry – particularly outside of major cities – have been left especially vulnerable, reports Brit Dawson.
From the chip shops, to the bingo parlors and burlesque dancers, photographer Mike Coles remembers capturing scenes of holidaymakers by the English coast.
Last week, Tower Hamlets council removed its nudity-restricting licensing conditions in a huge win for London’s kink community.