News & Politics / Activism / The clifftop activists looking out for migrants 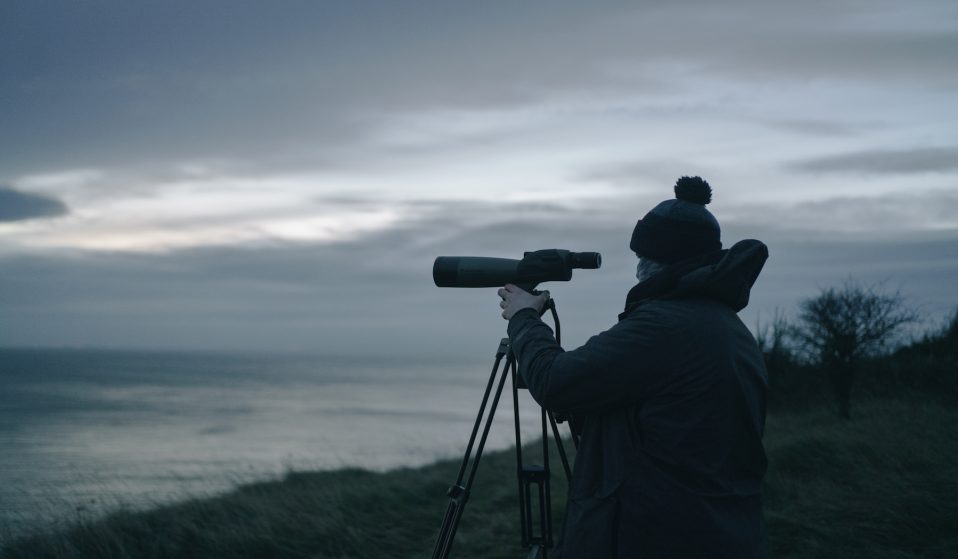 With a new bill seeking to further criminalise asylum seekers, the work of a group of volunteers monitoring small boats in the English Channel is all the more vital.

A new bill currently seeks to further criminalise asylum seekers. It’s made the work of a group of volunteers monitoring small boat crossings in the English Channel all the more vital.

“Watch yourself there, there’s a big hole,” our guide Sean* cautions, motioning to the cliff edge as we head up a muddy path high above the beach just east of Dover. He’s a member of Channel Rescue, a monitoring organisation launched by activists in 2020 in reaction to the growing “crisis” in the channel.  It’s early, pre 7am, and the light is thick and murky with the night. As we stomp up the path – which is “extremely treacherous when wet” – leafless branches catch on our coats. We round a corner and the full force of the wind hits. It’s unrelenting and biting, nipping at skin buried under layers of clothes.

After a false start – “we can’t stop here, the trees are blocking our sight lines!” says Sean – we find a place to pitch up on the cliff top, dropping the various chairs, bags, binoculars and a telescope to the ground to get our bearings. In front of us, the vastness of the channel opens up. Dotted across it are an array of lights. Some moving, others stationary. Yellow, reds and whites blink out in the night as we try to orientate ourselves. “Is that calais there?” I ask, pointing to a collection of lights southwest of where we’re standing. 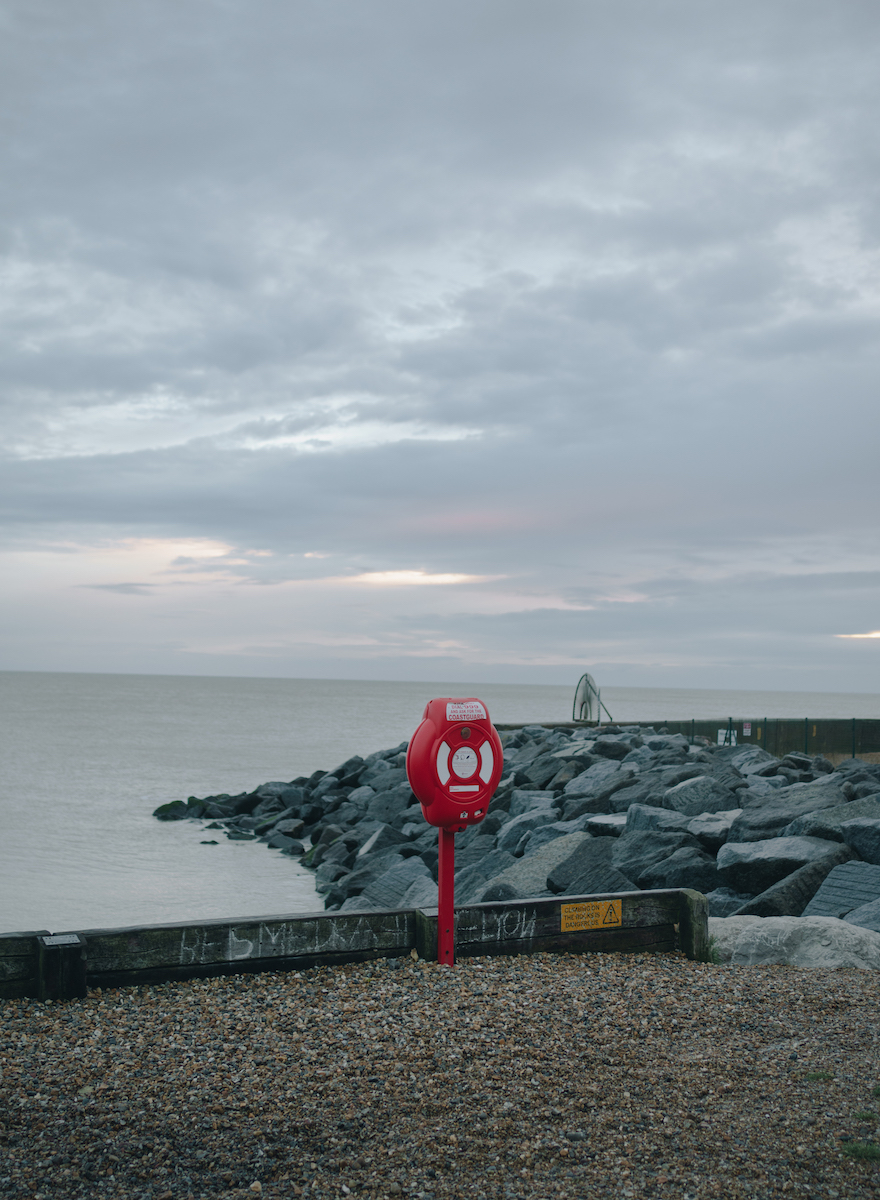 “I believe that’s Dungeness,” Sean replies, consulting his phone. He points to a collection of barely visible lights in the far distance. “That” he pauses, checking the map again,“is calais”.

The shortest part of the English Channel stretches from South Foreland in Kent to Cap Griz-Nez on the north French coast with just 21 miles separating the two points. It sounds close; a shorter distance than many commutes and yet, unless you’ve been there, and stood atop the famous white cliffs, it’s hard to get your head around the scale of the place.

The Dover Strait is, for all intents and purposes, a giant water motorway. Huge tankers, ferries and cargo ships zip up and down the expanse of sea, around sandbanks, buoys and light boats. Closer to the shore, fishing boats zip around, followed by flocks of seagulls. It’s a busy, crowded stretch of water, with swirling currents pulling and pushing beneath the often choppy waves, thrown ever higher by the sea breeze. The thought of taking to it in any vessel other than the giant ships snaking their ways across the horizons seems unconscionable, and yet, that is exactly what many are being forced to do.

Last year saw the number of people making crossings across the channel triple on the previous year, with more than 28,400 undertaking the perilous journey. 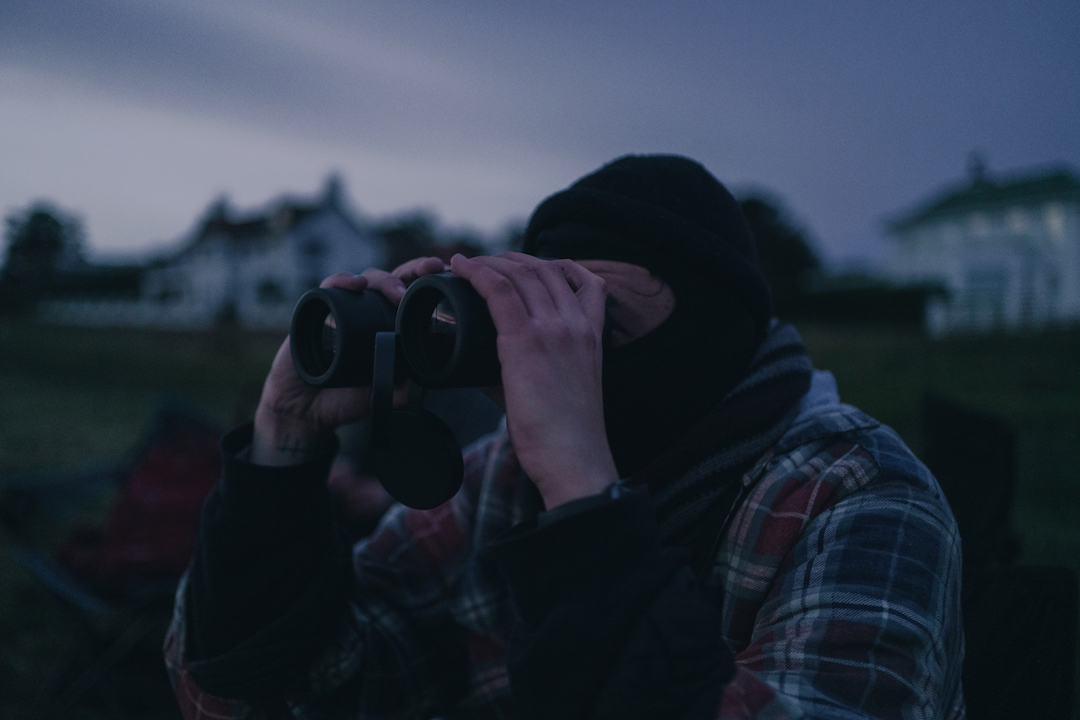 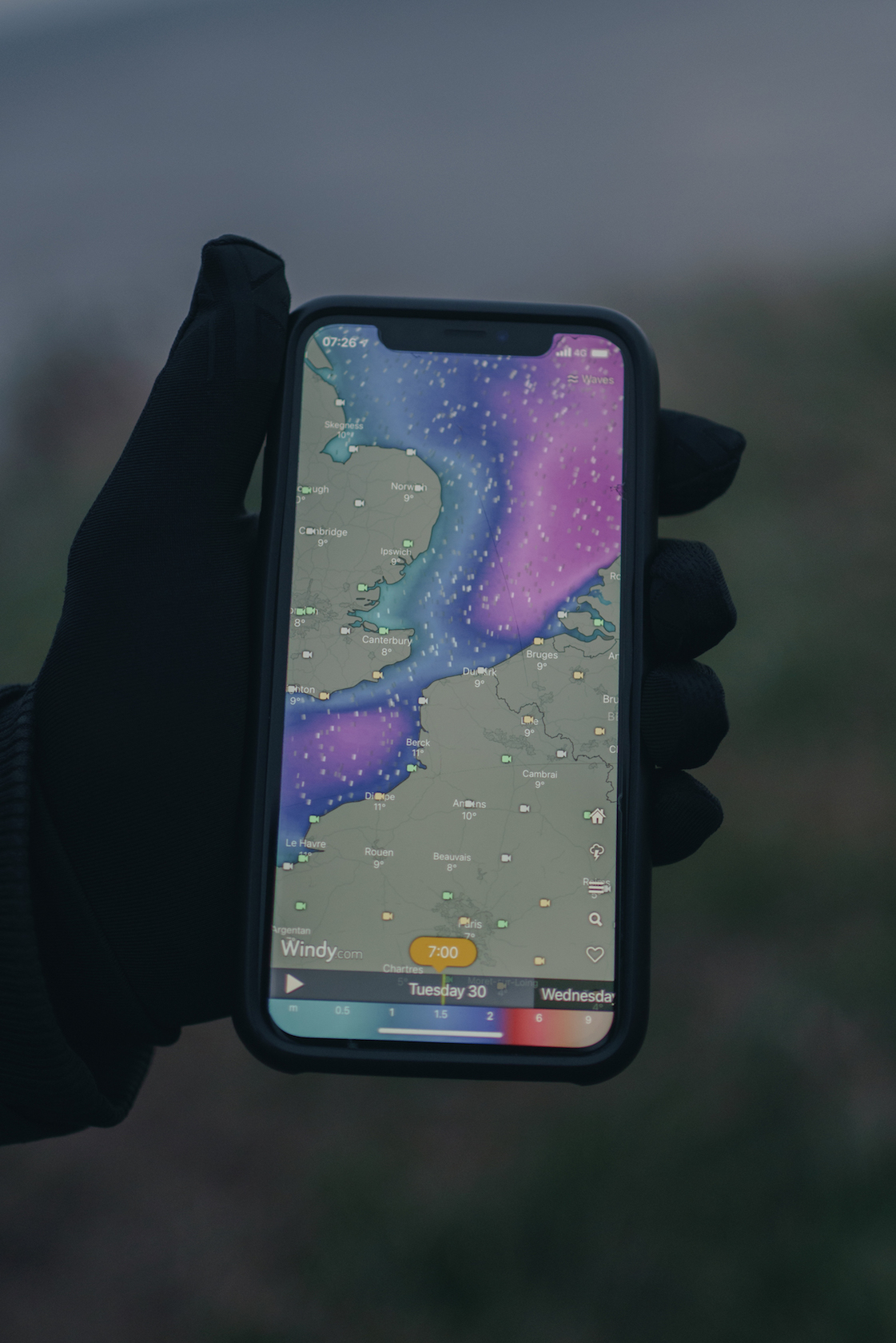 The huge spike in trips has been blamed by many in government, including the Home Secretary Priti Patel, on “criminal gangs” and “traffickers”. Patel has sought to bring in new legislation to thwart the “chokehold of the gangs” by penalising asylum seekers arriving in the UK using methods deemed “illegal” – such as by boat via the English Channel – and making them liable to up to four years in prison.

Furore around channel crossings is not new. For years, successive Home Secretaries have sought to utilise and capitalise on the hysteria around them. This hysteria is stoked up by politicians and then perpetuated by mainstream journalists, many of whom post daily updates of numbers of people arriving without context.

Those arriving via the channel on so-called “illegal” routes are explicitly immune from legal ramifications of that journey under article 31 of refugee convention. Despite what has been alleged by successive Home Secretaries and governments, there exists no legal requirement for those seeking refuge and safety to do so in “the first safe country” they arrive in. And yet, the madness of misinformation continues. A new bill currently making its way through the House of Lords is seeking to further criminalise those attempting to execute their right to seek asylum under the refugee convention and talks of deals with France to thwart crossings continue. Despite all this, desperate people continue to attempt to make the difficult, perilous journey. In November of last year, at least 27 people are known to have perished in a single incident in the channel after the dinghy they were on capsized. 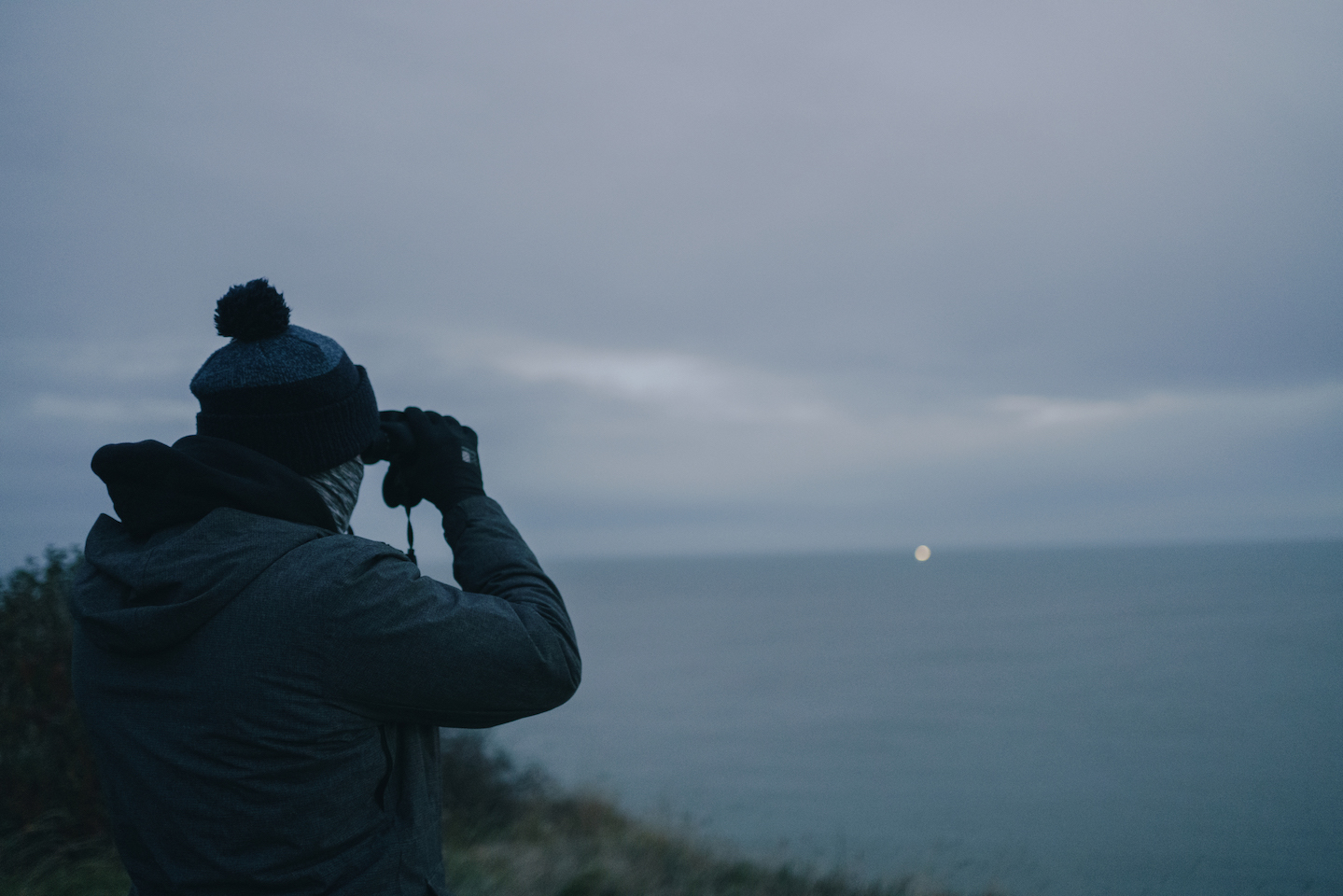 As Daniel Sohege, director of Stand for All, a human rights advocacy and support organisation, said on Twitter: “Small boat channel crossings “trebling” isn’t a reason to impose harsher border controls. It’s an example of how when you close other routes you force people to use dangerous ones.”

It’s why Sean is standing on a cliff in the bitter November cold with binoculars thrust up against his face. “Channel Rescue was set up by some people who had experience in Greece with refugee rescue,” Sean tells me over coffee after the shift on the clifftop is finished. “It was mainly set up as a legal monitoring organisation. The main motivation was seeing the increase in crossings but also the general atmosphere in terms of government response, Home Office, border force, it was obvious that there was a hardening of people’s response.”

Sean’s own involvement began with a trip to Calais in March 2020, which was cut short by the Coronavirus pandemic. After returning back to the UK, having experienced the conditions for those living in the camps across the water, Sean started looking around for something he could get involved in from home and came across Channel Rescue on Twitter. After a period of online engagement with the group, necessitated by the pandemic and various lockdowns, Sean did his first “shift” in the middle of last year. 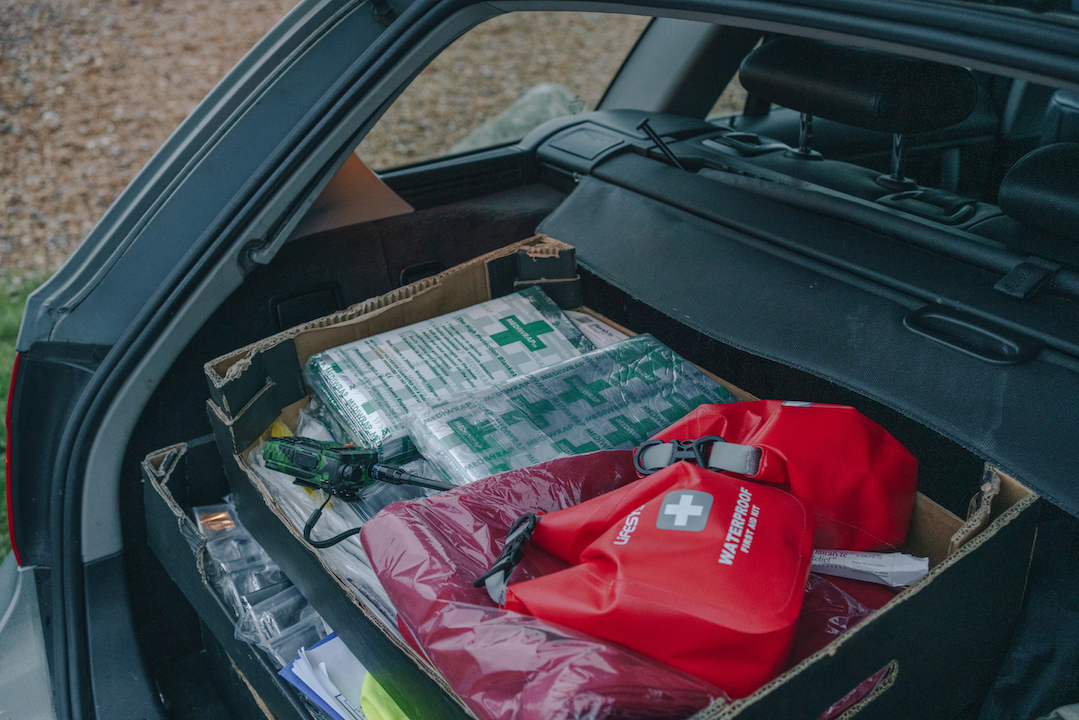 The organisation’s primary aim is to exist as a monitoring resource. To keep an eye both on those making the crossings, and any difficulties they may get into in undertaking them, but also to keep track of the movements of border force. The information gathered is used to put in Freedom of Information (FoI) requests and to corroborate data for legal fights against particularly pernicious parts of this government’s border policy.

It was Channel Rescue volunteers who last year witnessed Border Force agents practising the tactic of “push backs”, which involves agents of a state pushing refugees and migrants back over an international border through various different means. The tactics are illegal under international law and their proposed introduction by Priti Patel has been met with widespread criticism. It was Channel Rescue raising the alarm on them that started much of that criticism.

As we sit on the clifftop, Sean tells me it’s only because volunteers were able to monitor the push back training exercise that they then had the evidence to bring a case against the Home Secretary on the use of the tactics.

Atop the cliffs, each Channel Rescue volunteer has binoculars and a telescope to help them scour the horizon. The dinghies carrying those attempting to make the crossing are hard to spot. They’re low to the water, often zig-zagging because of the current. Sometimes their engines, not designed for the open sea, have cut out. Often those on board will shine their phone lights in the hope they’ll be spotted. 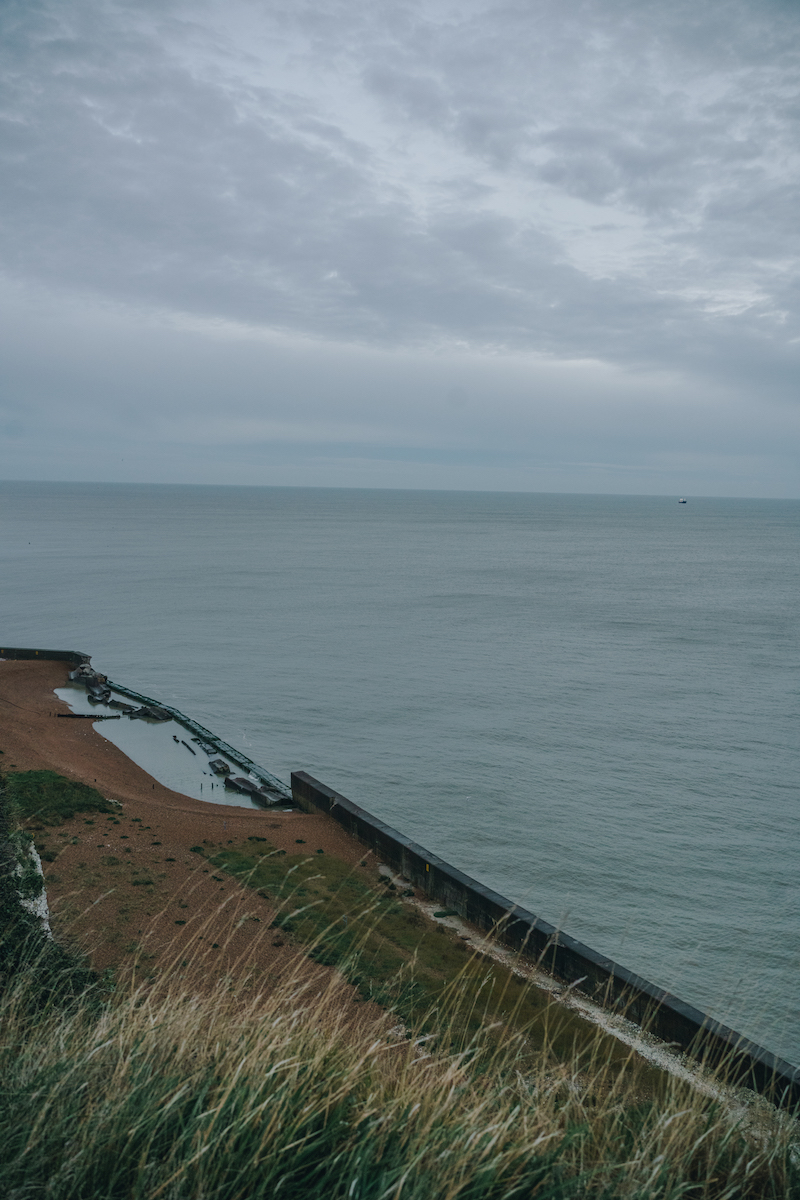 As well as binoculars, volunteers also use shipping apps to monitor the movement of border force and french warships in the channel as well as listening in to the radio. Any movements or crossings spotted are noted down, with times and compass points. If a boat appears to be in distress, volunteers phone the coastguard and have equipment in the boot of their cars in the rare event a landing happens close to their position. As authorities on the other side of the channel have cracked down, landings have become increasingly more spread out, with incidents reported as far east as Essex and as far west as Sussex.

The mornings up on the cliff tops are long and emotionally gruelling. Looking out in the gloominess, it’s hard to discern boats from crests of waves in the channel. The lights on buoys from those held up by desperate people in distress. Every potential flash of movement fills you with dread. Your brain is racing, trying to figure out if anyone is out there and whether they’re ok.

The shift we did came just days after the tragedy in the Channel that saw at least 27 people lose their lives and as rhetoric once again stepped up. In the hours we spent on the clifftop, we saw no boats attempting to make the crossing and no launches from border force or coastguard beyond one search and rescue helicopter.

“When nothing happens you have mixed emotions,” Sean says, as we make our way back down the treacherous path to the beach below. “You want people to make it across, but you’re glad no one has put themselves in danger.”

Linkedin
RELATED ARTICLES
OTHER ARTICLES
Financial turmoil is pushing people who work in the sex industry into more dangerous and desperate situations as a means of survival.
The workforce is now gearing up for industrial action after receiving a measly pay rise, reports Ella Glover.
Sean Maung’s photos are a love letter to the Black and brown communities that make up New York.
Birdy Chu reflects on documenting the historic moment in which the territory was formally passed back from the UK to China.
As the Scottish government announces a rent freeze, an activist with Living Rent who fought and won shares how they did it, and what must come next.
With skyrocketing rents, packed out viewings, bidding wars and more, renting in London has never been harder.