News & Politics / Activism / The fight to keep babies out of prison 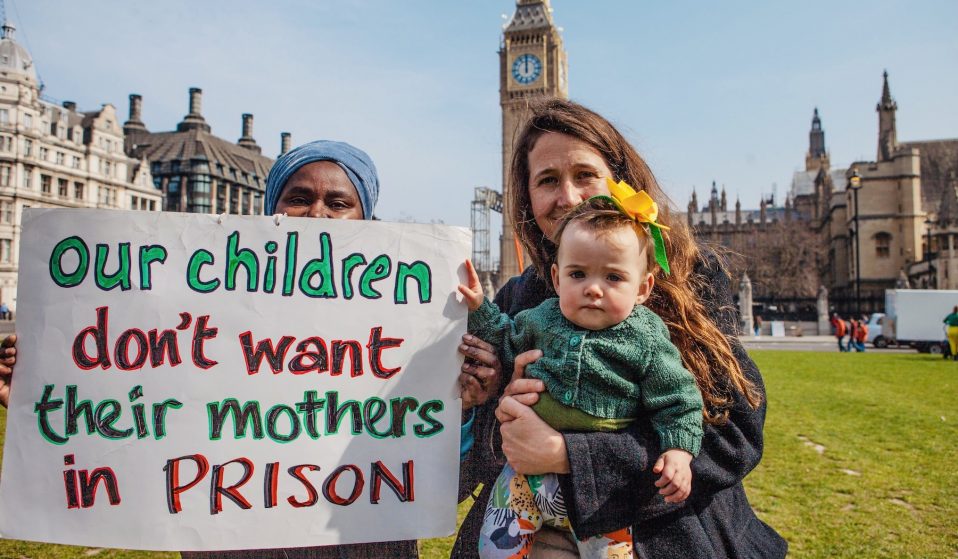 Earlier this week, protestors gathered in Westminster to call for an end to the imprisonment of pregnant people.

Earlier this week, protestors gathered in Westminster to call for an end to the imprisonment of pregnant people, highlighting the serious risks prison poses to mothers and their newborn children.

In the last three years, two babies are known to have died in women’s prisons. Their mothers gave birth in HMP Bronzefield and HMP Styal in October 2019 and June 2020 respectively without medical assistance. In both cases, prison inspectors found the mothers were “failed” by the system. The Prison and Probation Ombudsman has stated that all pregnancies within prison are “high risk” and yet, all over the country, courts continue to send pregnant women to prison.

There are 12 women’s prisons in the UK. Research by the Nuffield Trust found that just over one in ten women giving birth during a prison sentence did so before they reached hospital – in the prison or while on transfer to hospital. Analysis of hospital records has also shown a steady increase year on year in the number of babies born to women while serving prison sentences, reaching 67 in 2018-19 compared to 43 in 2013-14. 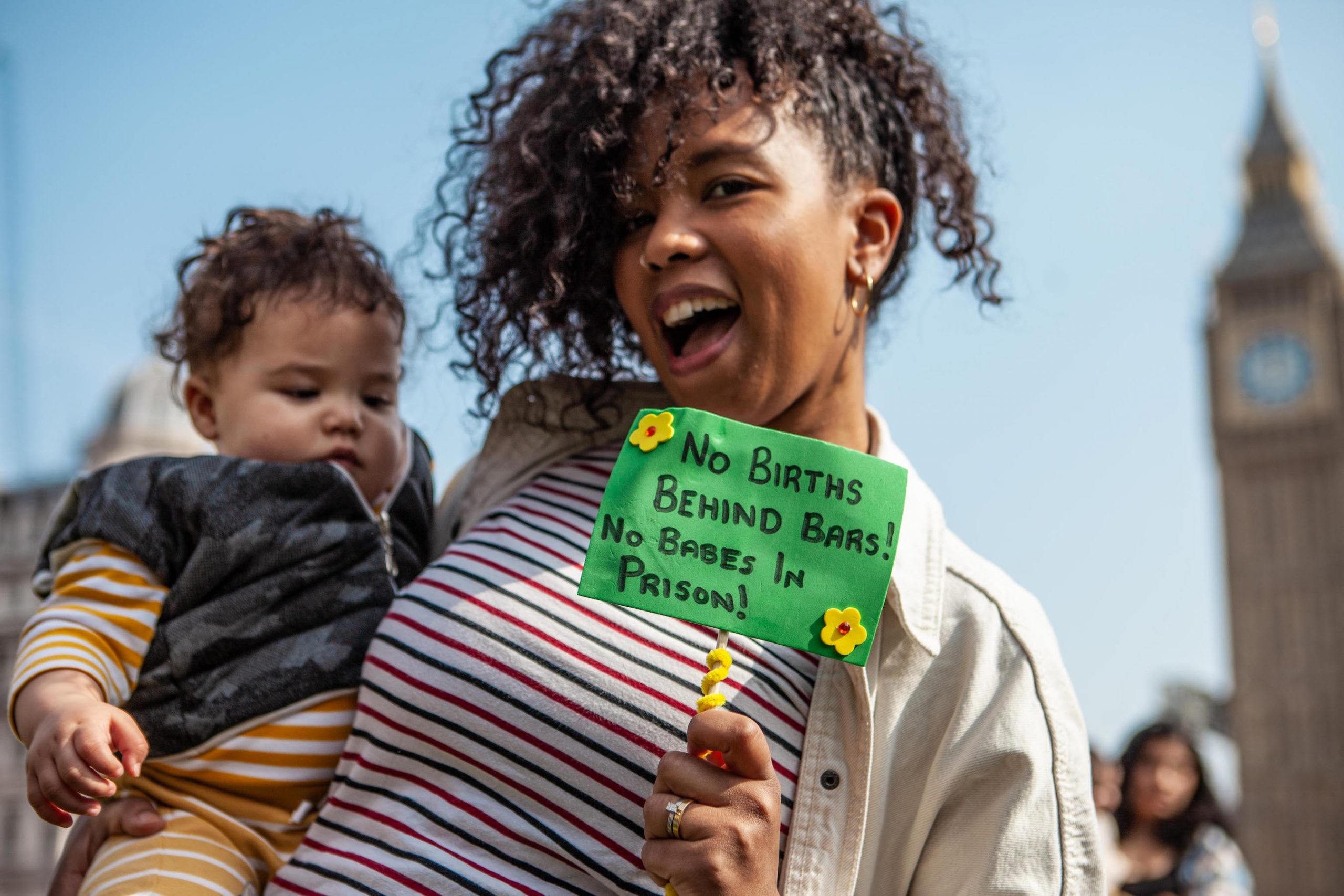 This week, over 50 parents, midwives and campaigners gathered in Parliament Square to demand an end to the imprisonment of pregnant women and new mothers. At the protest young mothers carried their children, many of whom wore daffodils for Mother’s Day, and chanted for an end to births in prison. Statements from those who had given birth in prison were read out, spelling out the need to end the imprisonment of pregnant and new mothers.

Campaigners say the only way to keep pregnant women and new mothers safe is to keep them out of prison and in their communities, where they can access support to give their child the best start in life. Eleven countries, including Brazil, Colombia and Mexico, have laws against sending pregnant women to prison. 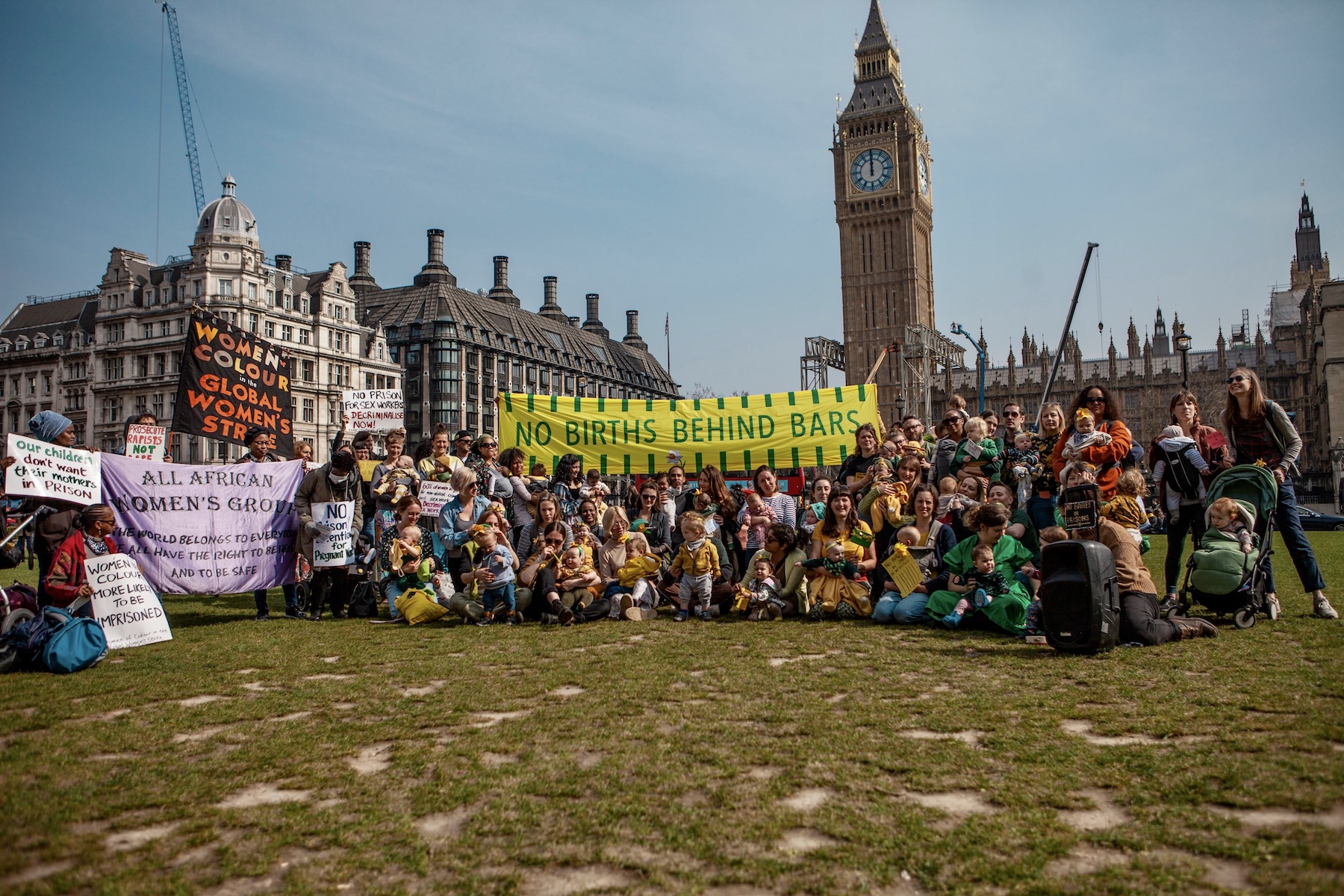 Writing in Huck last year, a former inmate (who asked to remain anonymous) described the devastating reality of being imprisoned while pregnant. This included a miscarriage scare which left her waiting days alone and terrified, not knowing if the foetus was still alive. “No pregnant person should ever be trapped behind several locked doors,” she wrote. “It’s impossible for any urgent medical needs to be seen to. We know that the worst has already happened to people who have given birth in their cells and lost their babies… But even for those prisoners who don’t go into labour but need to see a doctor, they’re trapped in their cell until the guards decide to let them out. And they might not.”

The horrifying consequences of this were seen in 2013, when Nadine Wright, an inmate at HMP Peterborough, miscarried in prison and the guards left her to clean up the blood and foetus. 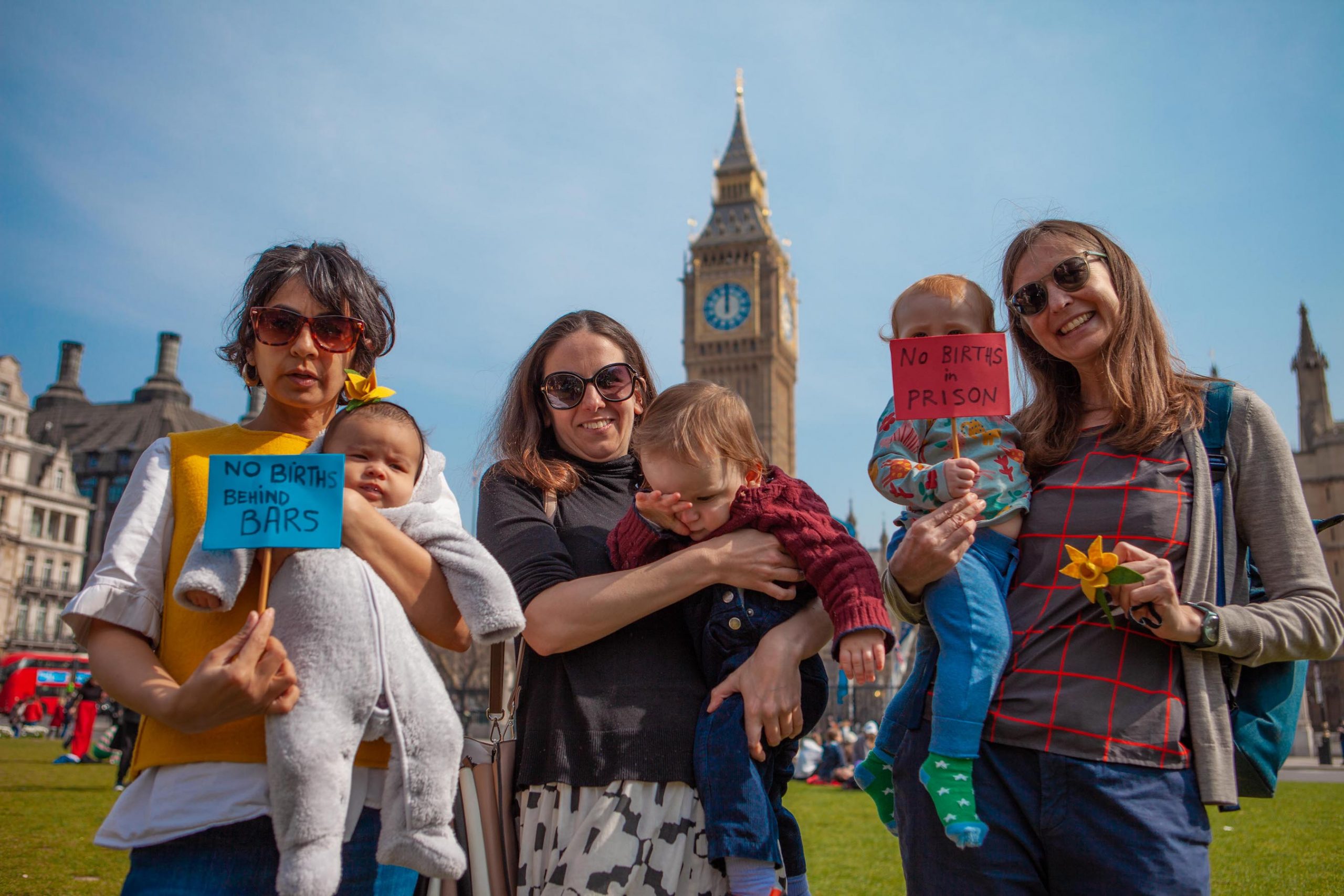 At the protest earlier this week Emma Hughes, of the campaign group No Births Behind Bars, gave a moving speech detailing her experiences. Hughes was one of the Stansted 15 and faced jail following her conviction for blockading a deportation charter flight at Stansted airport in 2017. She was heavily pregnant at the time of conviction and spoke of the horror of applying to Mother and Baby units at prisons and the distress of being separated from her as yet unborn son.

Speaking to Huck, Hughes said: “Pregnancy and new motherhood are precious and vulnerable times, we know this as a group of new mothers. We need the government and courts to keep our babies safe, and end the imprisonment of pregnant women.

“It is never ok for a baby to be in jail, it is never safe for a woman to go into labour in a cell, and pregnant women and babies in prison are exposed to lethal risks.” 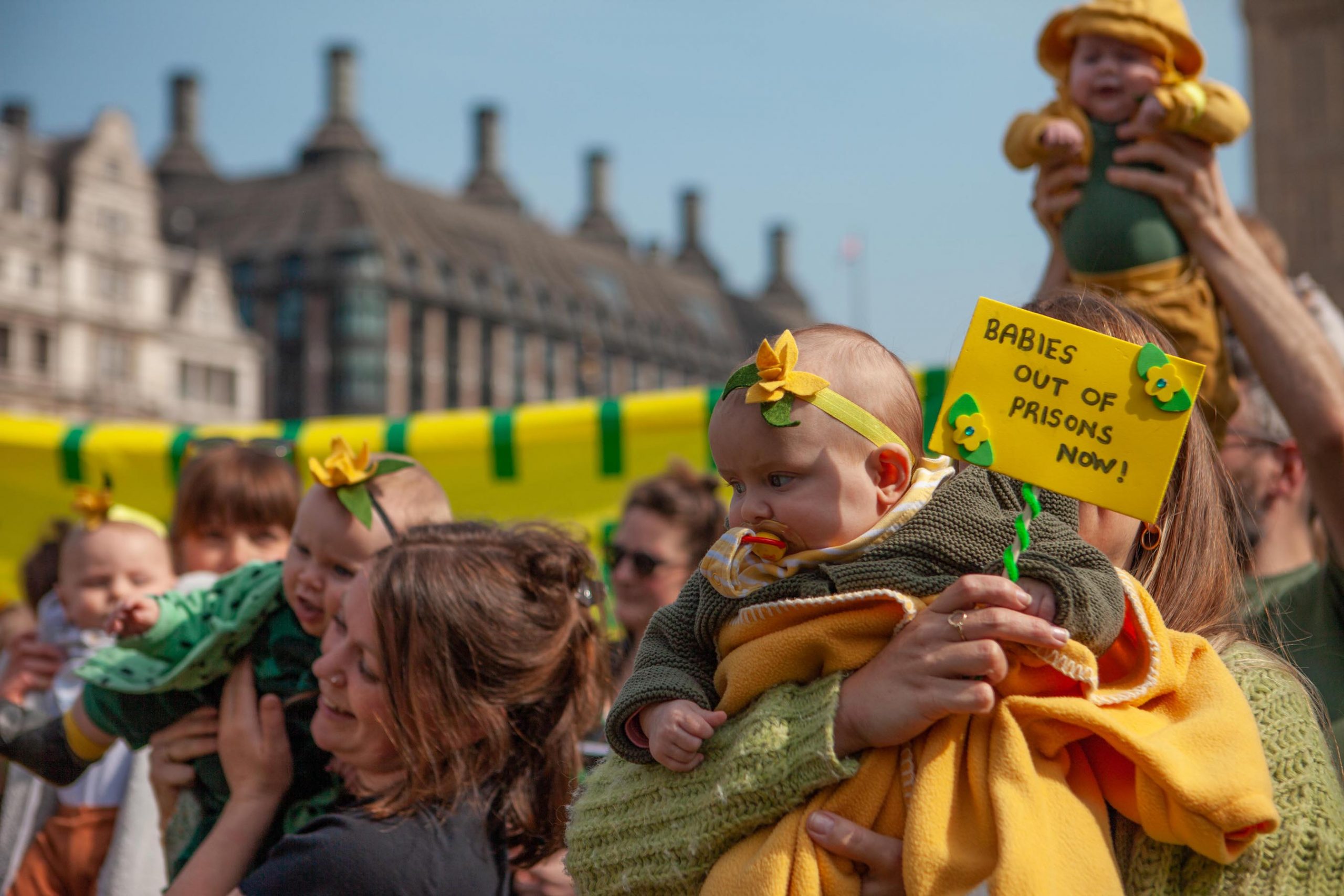 It is a sentiment echoed by Dr Laura Abbott, a senior lecturer in Midwifery at the University of Hertfordshire, who told Huck. “Prison is an unsafe environment for pregnant women and their unborn babies,” Abbott says. “In-cell births are not uncommon and women are giving birth in the prison estate, without qualified midwifery support and in non-sterile, inappropriate environments, far more often than they should be. This is highly concerning and must be addressed as a matter of urgency, so women and babies can be protected.”

The campaign group Level Up has launched a petition on the issue which has garnered over 10,000 signatures so far. Co-director of the group Janey Starling told Huck, “Prison will never, ever be a safe place to be pregnant. The trauma and toxic stress of the prison environment causes lasting harm to both mother and child.”

“It’s time for the government to end the shameful imprisonment of pregnant women and new mothers, and make sure they are supported in the community instead.” 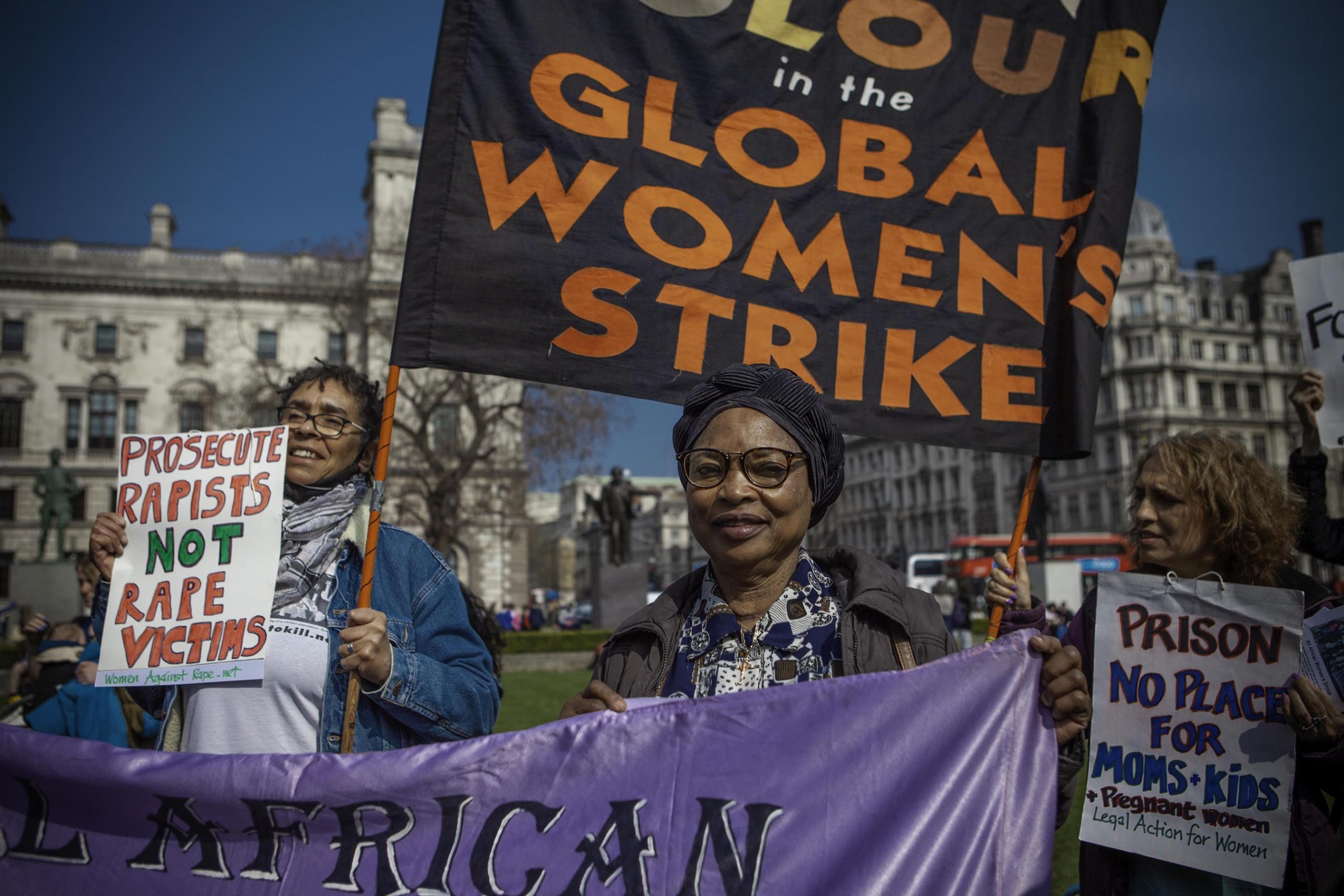 Linkedin
RELATED ARTICLES
OTHER ARTICLES
A group of young Palestinians have found temporary freedom in the act of parkour, reimagining wreckage and ruins as a series of high-octane playgrounds.
Rhiannon Adam spent three months capturing an ageing society wracked by division, isolation, and the aftermath of scandal.
The idea that a younger generation is abandoning work has become a popular narrative online, but it doesn’t necessarily reflect reality.
Ahead of the release of their first collaborative album, the producer and rapper talk psychedelics and the state of UK hip hop.
Photographer David Corio’s archive offers a glimpse inside a revolutionary era of music and nightlife.
Financial turmoil is pushing people who work in the sex industry into more dangerous and desperate situations as a means of survival.