News & Politics / The rise of anti-abortion activism in UK universities 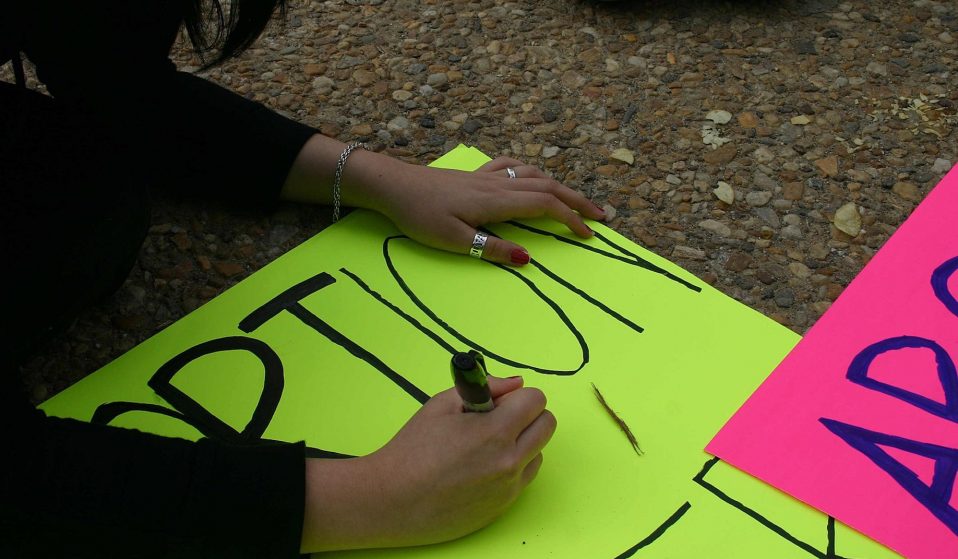 The government’s efforts to protect ‘free speech’ within universities has emboldened pro-life campaigners operating on campus.

The government’s efforts to protect ‘free speech’ within universities has emboldened pro-life campaigners operating on campus. Unsurprisingly, it has led to significant backlash among students.

Tension have been mounting at Exeter University after earlier this month Exeter Students for Life (ESFL), a student society established in September 2019, was given a stall to canvas students during fresher week, and became available to join via the University of Exeter Students’ Union website. ESFL President, 2nd year law student Alireza Ghazi-Torbati, has been quoted as saying that “abortion is part of the rebellion against God and it deserves punishment”. Unsurprisingly, backlash against the group has been widespread, and many were quick to call out the fact that the ESFL committee is led by three men and only one woman.

I don’t know what’s worse: Exeter having an anti-abortion society, the fact three out of four committee members are men, or their horrible graphics

Within 72 hours of the freshers fair, a petition campaigning against the group reached 7,200 signatures. “University must be a safe space for healthy debate; a place where intellectual curiosity is able to flourish and people are in turn able to learn and develop their opinions,” the petition reads. “However, by allowing the existence of a society based around an opinion, that belief is shielded from the necessary scrutiny that would normally occur.

“Dangerous ideology is one that must be exposed to the opposition, not sponsored by our student union, and we believe that those who so strongly believe it should express it in other societies – such as the Debating Soc or the Christian Soc,” it continues. ESFL did not respond to Huck’s request for comment.

Boasting nearly 6,000 followers on Facebook, Queen’s University Belfast Pro-Life Society is one of the largest. Accessing termination services for students in Northern Ireland is particularly challenging as abortion was only decriminalised in October of 2019 and have yet to be fully implemented across the country. Beforehand, it was completely illegal for a local woman to access a termination, even if she had conceived following rape, incest or if the foetus is so severely disabled as to be unable to survive outside the womb. For the students of Northern Ireland, safe access to abortion may be a matter of life or death.

Responding to the backlash against ESFL, the University of Exeter Students’ Guild says it supports freedom of speech, and will investigate any alleged breaches of the set of values and code of conduct its societies have to abide by.

The rise in anti-abortion activism on campus takes place amid announcements made last February by the Department for Education that it would be appointing a “free-speech champion” for higher education, alongside implementing changes to the law to guarantee the preservation of free speech in universities. These plans were made partly in response to the growing number of Student Unions’ opting to “no platform” speakers they considered potentially harmful. Concerns about higher education institutions potentially stifling free speech were discussed in a 2018 Joint Committee Human Rights Meeting.

Evidence to the contrary, however, would suggest that freedom of speech isn’t under the threat as Williamson – or the far-right – would suggest. In 2018, a Joint Committee Human Rights Meeting examining free speech in universities concluded that while “any inhibition on lawful free speech is serious, and there have been such incursions, but [they] did not find the wholesale censorship of debate in universities which media coverage has suggested”.

Despite this finding, universities have been forced to lift bans against anti-abortion groups at Birmingham, Nottingham, Aberdeen, and Stratchclyde out of fear of facing possible legal challenges for inhibiting free speech. Now, however, Williamson’s proposed bill means that not only will potentially dangerous ideologies be widely disseminated in universities, but those who speak up against them may find themselves disciplined or face legal repercussions.

As a result, some students have argued that the government has used free speech to fuel a proxy culture war that allows bigotry and hate speech to go unchecked while silencing potentially vulnerable students. On 7 October 2021, #ShameOnSussexUni was trending on Twitter following widespread backlash against gender critical academic Kathleen Stock, who received an OBE in January of this year. Stock stated in a 2018 interview that “many trans women are still males with male genitalia” and has written extensively on biological sex since. In favour of the free speech bill, Stock states that “vice-chancellors and university management groups have shown that they can’t manage the modern problems around suppression of academic freedom”. Stock did not respond to Huck’s request for comment.

However, users took to questioning the hypocrisy of how free speech is actually implemented in universities. As one Twitter user put it: “When are we going to have an open and honest debate about transphobia in academia? #ShameOnSussexUni for silencing their students protesting about transphobic academics at their university. Why isn’t their free speech being protected, rather than silencing uncomfortable truths?” The very same logic has now begun to encroach on the argument against anti-abortion student societies.

In 2020, anti-abortion activists targeted the University of Cardiff after the Union chose to adopt a pro-choice stance. Ellie Redpath, 21, an Oxford Classics finalist, told Huck that Oxford Students for Life were distributing leaflets which described stories of women who had chosen to have abortions and then went on to commit suicide. The resources “described the development of an embryo in a manipulative and overly emotional way,” she claims.

“I honestly think it’s disgusting, I went and picked up some of their leaflets to see the kind of information they were spreading and lots of it is incredibly harmful and triggering,” Ellie continues. “I think this kind of information is actively dangerous and harmful to people who are making decisions or have made decisions about pregnancy and reproductive health.”

Although substantial debate surrounds what  “silencing” or “suppressing free speech” may actually look like in UK universities, students are using the power they have to fight back. Exeter saw the quick formation of a Students Pro Choice Instagram page and condemnation from Exeter Law Society.

“‘Free speech’ has been used to form this anti-abortion group in an overtly sexist way,” a member of Exeter Students Pro-Choice told Huck. “A productive use of Exeter’s budget and their time would be campaigning against femicide, poverty and for animal rights, since they’re so ‘pro-life’. Or, against sexual abuse and rapes that can lead to unwanted pregnancy and promoting safe sex and better sex-ed to decrease the rate of abortion in the UK.” (University of Exeter did not respond to this comment at the time of publication.)

Likewise, Antiterfsussex – an unaffiliated network of queer and trans students set up in the face of Sussex Uni’s employment of Kathleen Stock – is showing the methods of resistance and unity among students. Indeed, what’s clear is that it is students who will take on an even greater role in curbing the spread of dangerous ideology on campus where their universities are failing to.

Linkedin
RELATED ARTICLES
OTHER ARTICLES
A recent High Court ruling against the right to wild camp in Dartmoor National Park sparked the largest land protest in history – and campaigners say their fight is not over yet.
The action took place in response to the 200 asylum-seeking children who were placed in hotels run by the Home Office who have gone missing.
Tristan O’Neill’s shots of dancers caught in moments of reverie at the height of rave’s golden age are a testament to the UK’s legendary club culture.
After blocking the Scottish government’s gender recognition reform bill, Westminster is now devising further changes to the law to make it harder for trans people to self-identify.
Following the release of his debut single, Deyaz talks battling addiction, dealing with his struggles through music, and building a budding music career from his living room.
A new law change is enabling Britain’s donor-conceived children to know the truth about their origins – but campaigners say the fertility industry must do more to protect people.