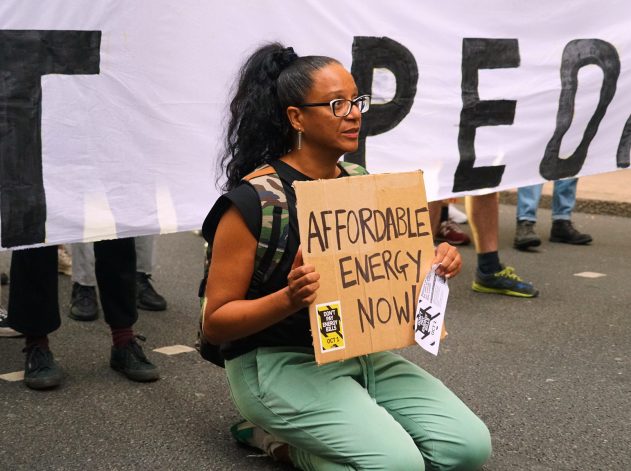 The Chancellor’s scaling back of the energy support scheme has left many people vulnerable, reports Ella Glover.

The Chancellor’s scaling back of the energy support scheme has left many people in desperately vulnerable situations, reports Ella Glover.

“I’ve had stabbing chest pain from the anxiety, my hands are constantly shaking and the last two days at work I’ve had to try and stave off panic attacks,” says Sophie, a 24-year-old marketing manager living in Manchester. In the past year, Sophie’s energy bills have nearly doubled and, although Sophie and her partner were able to lock into a fixed-rate contract, their supplier moved them to a variable contract without warning.

At first, thanks to Liz Truss’s ‘Energy Price Guarantee,’ which promised to cap the average annual energy bill (based on a three-bedroom house) at £2,500 for two years, Sophie wasn’t too worried. But after a huge U-turn by the newest chancellor Jeremy Hunt, the scheme is being limited to six months. Now, Sophie will be among the millions of people worried about being plunged into fuel poverty come April.

Following Hunt’s U-turn, the average energy bill is forecast to rise to £4,347 from April next year – and with wages dropping and inflation spiralling, it will be those on the sharp end of the energy crisis who will pay the price. To find out that it’s finishing in April is honestly just nightmarish,” Sophie says. “Predictions of April’s prices aren’t filling me with confidence either – it kind of feels like I was lulled into a false sense of security.”

Sadly, Sophie’s mum was recently diagnosed with cancer, but the prospect of rising bills means that Sophie can’t go part time to help look after her. “Ideally I wouldn’t be working at all right now but that is very much a pipe dream,” she says. “I really just want to spend time with her. But with how things are looking there’s no way I could even reduce a five day week to four days. I need all the work I can get.”

This, of course, has had a profound impact on her mental health. “Obviously with my mum’s diagnosis my emotional state was already a bit ropey, but the whole [energy] thing has tipped me over the edge,” she says.

She isn’t alone. Carol, 60, from St Helens, works in a care home for minimum wage. “I’m living on the breadline as it is,” she tells Huck. “I haven’t bought new clothes or been to the hairdressers for 12 months. I’m in a state of almost constant worry about money.” The £66 she received from the government this month helped, but she “doesn’t know how [she’ll] cope if that payment stops” – something that is looking likely following Hunt’s announcement.

Living with asthma, COPD, osteoarthritis and depression, Carol says she is petrified about how the cost of living will impact her health. “I’m worried that it will deteriorate if I can’t afford to stay warm,” she says. Carol says she’s finding it increasingly difficult to stay afloat, and has had to double her dose of anti-depressants. “I’m finding it hard to cope with life,” she tells Huck. “Things that I would have taken in my stride like work issues with colleagues seem overwhelming.”

Single women like Carol are among the hardest hit, especially those with children. Earlier this year, research by single-parent charity Gingerbread found that more than half of single women would have to choose to go without so they can afford essentials for their children in the face of rising energy bills, with 62 percent planning to cut back on food. Victoria Benson, the charity’s chief executive, said: “Despite the majority of single parents being in work too many are trapped on low incomes and forced to rely on welfare support. After years of austerity, the pandemic and now the cost of living crisis, they simply can’t afford basic living costs and it’s clear that things are set to get worse.”

Nuno, a 30-year-old hospitality worker living in London, is worried about the uncertainty of Hunt’s new policy. He and his partner are currently spending £160 on energy per month, which he says is “already a bit of a stretch.” “I feel like we’re definitely going to go over the £200 mark, which is ridiculous,” he says. “I’m going to have to look into other kinds of support if the government’s not going to help us.”

Nuno was recently forced to go part time at his job after having surgery on his knee, something he was able to opt for knowing that his energy bills would be kept in check. He says the government’s U-turn feels like a “stab in the back,” because he isn’t able to pick up extra shifts to compensate for the money he’ll lose and the lack of details means he can’t budget properly. “I don’t know where else we’ll get the money from,” he says.

Hunt has proposed to replace the guarantee with a more targeted scheme from April, focusing on the “most vulnerable” – although it’s not clear who that label refers to. Dr Carole Easton, Chief Executive at the Centre for Ageing Better, tells Huck that some older people living in the least energy efficient homes will not be able to meet rising costs even with the aid of the Energy Price Guarantee and says that, if the replacement focuses too much on income, pension-aged people will suffer.

“We know that households with older people are already cutting back more than any other age group on energy with many frightened to use appliances for fear of the costs involved,” she says. “Even when winter has passed, many older people will still have significantly higher energy demands than the average, whether that be from the use of television and radio for social contact, increased time spent in their own home or the use of medical equipment at home.” Easton says the government needs to be clear on who will be considered “most vulnerable” in order to quell rising anxiety.

It’s clear that the poorest in society will be most impacted by the government’s recklessness. Thankfully, Don’t Pay UK, a campaign geared towards mass nonpayment of energy bills in response to the crisis, is ramping up action to refocus on the scrapping of the guarantee in April.

A spokesperson for Don’t Pay told Huck: “Once the limited support this winter is snatched away from us, the government is once again going to force struggling families and businesses to pick up the tab for its mistakes. It’s clear the only guarantee this government can give is to energy producers, allowing them to keep making record profits while the rest of us suffer.”

While some 200,000 people pledged their support to the campaign before 1 October – a move that posed a genuine threat to energy companies – organisers say around 5000 more have signed up since Hunt’s announcement. “The country cannot cope with this uncertainty,” the Don’t Pay spokesperson continued. “We cannot trust anything this government says and we cannot afford to pay for its mistakes.”

Linkedin
OTHER ARTICLES
Photographer Nico Froehlich’s series documents South London’s diverse communities, while also reflecting on their fragility amid rapid gentrification.
Layna, Maysa and Amaya are three siblings looking to disrupt narratives around the sport. In doing so, they’re hoping to inspire a new generation of skateboarders.
The demonstration took place this week over plans to slash £50m from arts bodies in London.
The photographer describes taking inspiration from Magnum photographers to craft an intimate and revealing portrait of the city.
Max Miechowski reflects on documenting land that is being lost to the sea – and the people who live life on the edge.
Hackney Bumps is a DIY sanctuary in the heart of East London, home to a thriving diverse community of skateboarders – and beyond.