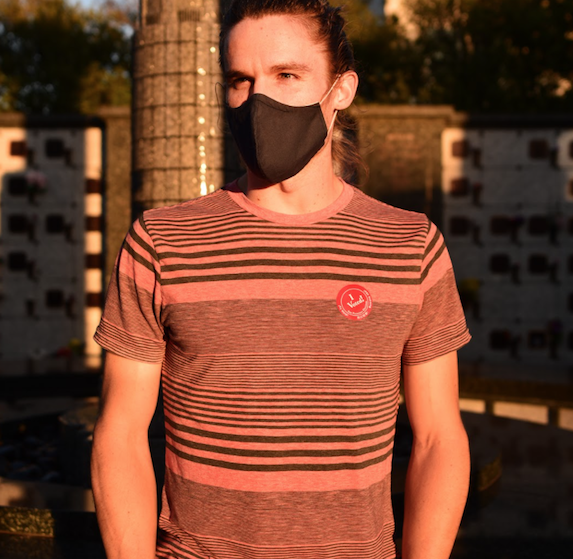 Last week, San Francisco residents cast their ballots in a most unusual location. Huck spoke to some of them to find out why this year was a moment to vote like your life depended on it.

Last week, San Francisco residents cast their ballots in a most unusual location. Huck spoke to some of them to find out why this year was a moment to vote as if your life depended on it.

There was a quiet solemnity across the city last week as San Francisco went to the polls in the US election, perhaps nowhere more so than in a quiet corner of the Richmond District. Just north of San Francisco University lies the Columbarium – the last mausoleum in the city and perhaps one of the most unlikely locations for a polling place.

This year has been colloquially called a year to vote like your life depended on it. Four years of the Trump administration have seen an America almost torn apart. His fast and loose grip on the truth, policies of hate and division and structural incompetence have pushed the country to the edge. As people voted in this month’s elections around 1,500 American were dying a day in the country’s worsening Coronavirus pandemic. Many blamed the eye-watering numbers on Trump’s seemingly emphatic devotion to mismanaging the crisis.

People are dying without a care in this country. Even with all the bluster and the noise of the election cycle, it’s undeniable that the lives of thousands were on the ballot. For those voting in the Columbarium, this could not have been clearer. Nothing puts that which is at stake in sharper relief than voting amongst the dead. 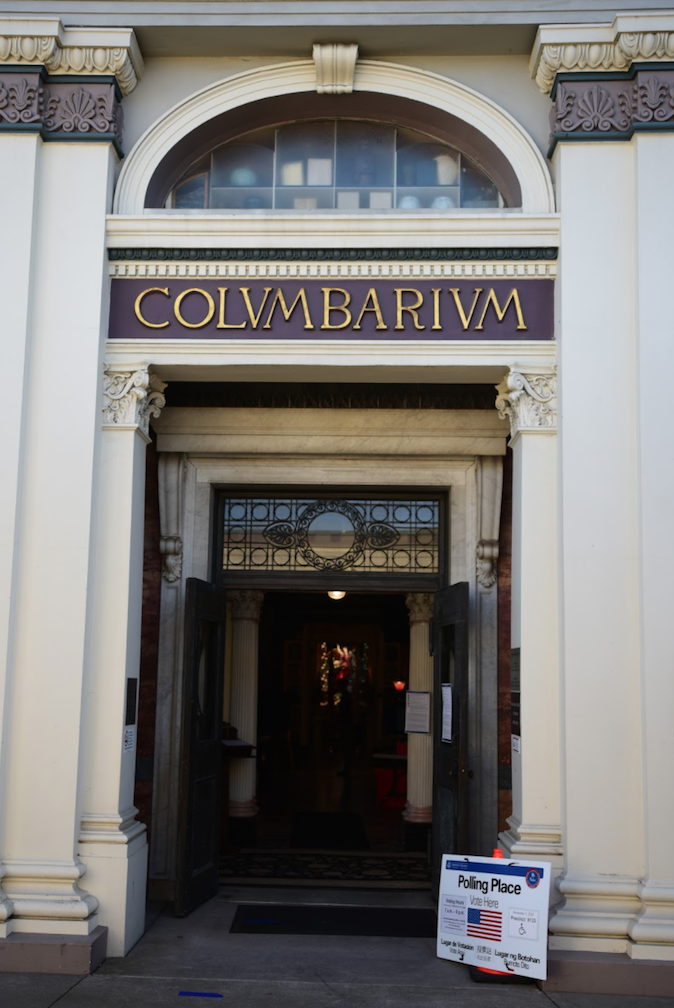 San Francisco Columbarium and Funeral Home – a treasured piece of Victorian-era history and sacred world-renown architecture – is special in myriad ways. The inside niches and stained glass windows within the column and the periphery of the main building have stood the test of time, standing their ground against an ever-changing city.

“This whole area [in the Richmond District portion of the city] used to be cemeteries years and years and years ago. Back in the 20s, they decided to move all the people that were buried in the local cemetery here to Colma (a city south of San Francisco city limits) and they grandfathered the Columbarium in,” Brian Kestenblatt, general manager of the Columbarium explained.

“The [building people are voting in] opened in 1898,” Kestenblatt continued.  “It changed hands a few times. People have been voting here for at least 15 years. It’s a beautiful spot. It’s very peaceful. It has a great theme to it.”

On Tuesday, a steady flow of voters trickled in. One poll worker recounted how an elderly woman who’d lost her husband earlier this year made a point to come in to vote for the first time this year. 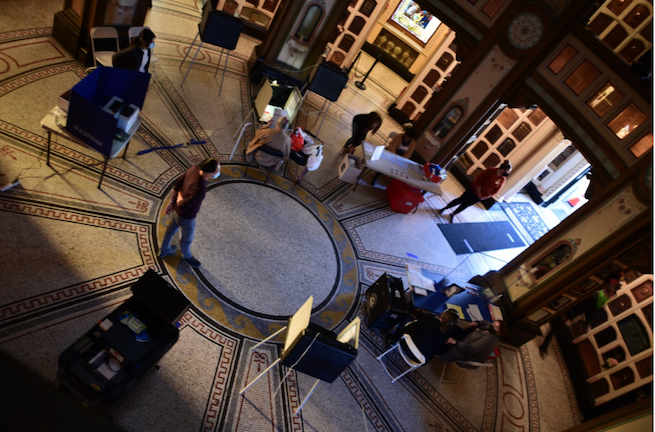 Most voters coming into the space were reserved and quiet. The Columbarium, unlike many of the city’s other unique venues that’d been turned into polling places such as a leather bar, offered a peaceful port in the storm of one of America’s most fractious and tumultuous elections in generations.

This election is the third time Eric Brenner, 31, has voted at the Columbarium. Like many during an intense time, he coped with the reflexology of routine to process things. For him, voting at the mausoleum is simply a matter of convenience as he lives in the area. Perhaps the death of this year has desensitised him to the irony of things.

“I always vote every time I can to have my voice heard. It’s a habit. I cannot name one [issue] that brought me out here or to vote in particular.”

Brenner seemed accepting of the uncertainty of the upcoming election results. He was noticeably a bit more muted and reserved when asked about the direct issues that motivated his choice beyond maintaining a steadfast living homeostasis.

“I’m nervous [about the outcome of the election] but I don’t know. I think I’m taking it better than a lot of people. Or I’m just not as nervous as other people.” 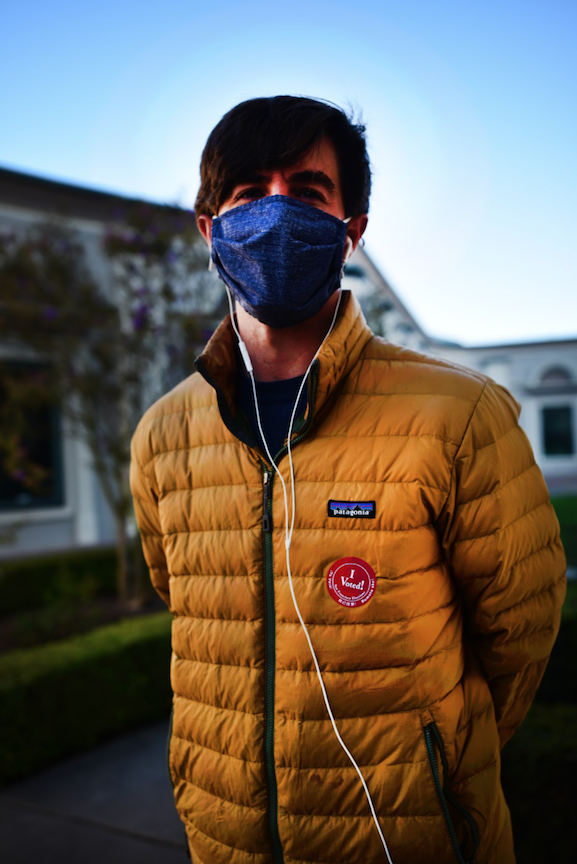 Michael Papiri, 31, made a point to come in to drop in his ballot on Tuesday at the Columbarium rather than make a trek south to a neighbouring county where he used to live and was previously registered. Like many residents of the city, he didn’t know that he could vote here without being personally directed to the location. He half laughed when it was brought up.

“I didn’t really even think about it but you’re right. It is a bit weird given everything,” he said as he looked around him.

“There’s more riding on this election than the typical election,” Papiri stated. “It’s important for me because it seems like a lot of protections and, for instance, environmental laws that were put in place in previous administrations or any sort of general normalcy is slowly being eroded. I want to make my voice heard and make sure that those protections are kept in place. I think it extends beyond environmental protections to civil rights. I would like to see William Barr and the Trump Administration out the door.”

Deidre Kennedy, an Irish middle-aged woman who has lived in the neighbourhood for sixteen years has familiarity with the space and has voted at the Columbarium for several election cycles. 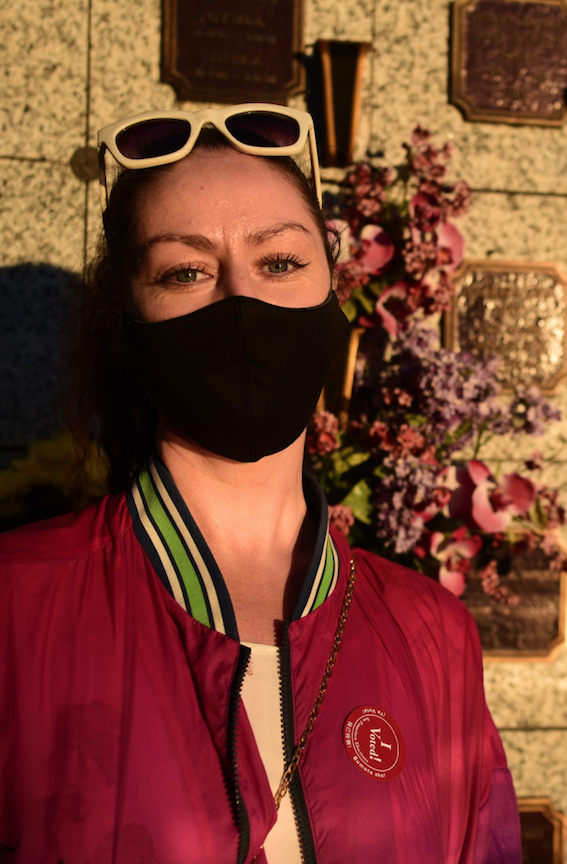 “It’s a very historical day. I also exercise my right to vote at all costs. I’ve been voting here for years.” she said.

Kennedy stated that she has a deep connection with the place and its time in history both as a space for the dead but also with the timing of the election itself.

“There’s a connection to the past, the people who have been here, the ancestor energy,” Kennedy said. “With the Day of the Dead yesterday, it’s an ancestor time of the year. I’ve always thought that there was something suspicious about it.”

“Lots of people who came before us didn’t even have the right to exercise their right to vote. There is an honour in this that we should all respect. It’s an important moment in history. I’d like to see some female energy in there too. We need change. We are ready for a big change. The world needs it as well on an international level. It’s really important for international relations. Climate wise there is a lot at stake. We are in the eleventh-hour in a lot of ways. We need stronger leaders.”

Whether by convenience, by luck or with intention, the voters using the Columbarium this year all did so against the backdrop of seismic threats to the lives of those not just in the city, or indeed the country, but around the world. Many hoped their vote would be the end for Trump and his America, who’s callousness has woven death into the fabric of society. Perhaps cloaked in the shadow of the already departed was the best, most poignant place in America to cast a vote for life.

Linkedin
RELATED ARTICLES
OTHER ARTICLES
While protests over abortion rights rage in the US, access to abortion services is still almost nonexistent in parts of the UK.
In the last of our dispatches from OFFF Barcelona, Rufus Deuchler and Vincent Gault discuss the future of creative process.
Following the release of his newly republished 1991 book, Redheads, the American photographer reflects on his celebration of ginger people and their magnetic power.
Following the release of his latest album God Don’t Make Mistakes, the rapper talks horror villains, police brutality and being unafraid to show his vulnerable side.
From the Yakuza to a biker gang, Bruce Gilden recounts capturing Tokyo and Osaka in the ‘90s.
Following the success of her debut novel, the Tottenham native is restating her commitment to the place that made her.