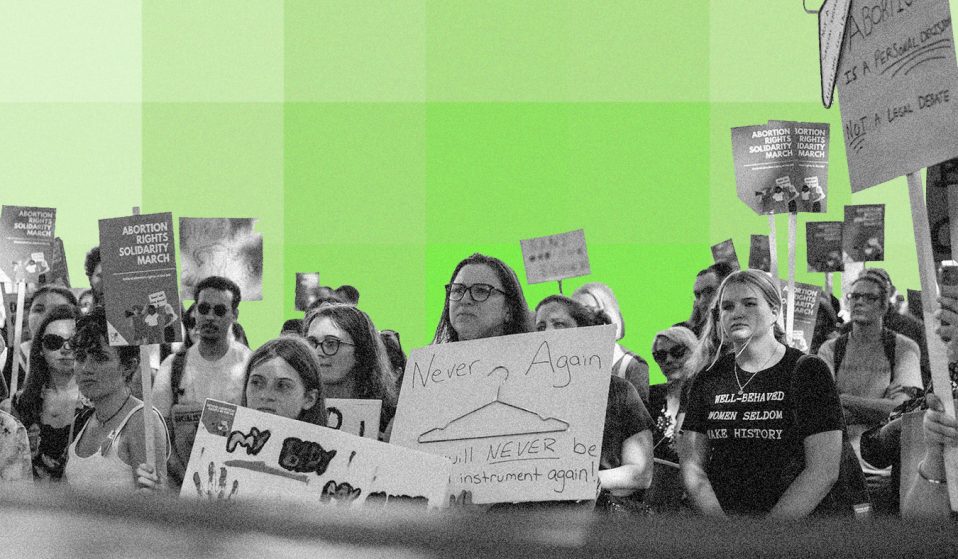 A young woman recounts her experience of being harassed by anti-choice campaigners as she was seeking an abortion in Glasgow.

A young woman recounts her experience of being harassed by anti-choice campaigners as she was seeking an abortion in Glasgow.

Each year, 100,000 patients in the UK have an abortion at a clinic that is targeted by anti-choice protesters, who use their presence to intimidate and harass them for accessing medical care.

Protesters often hold signs equating abortion to murder, pray loudly, and hand out leaflets to patients and passersby. While a handful local authorities have implemented buffer zones around clinics, campaigners are calling for national legislation to safeguard women’s right to abortion care without harassment.

Here, a 28-year-old woman who asked to remain anonymous shares her experience of facing intimidation from anti-choice protesters near an abortion clinic in Glasgow.

I was 20 and a student when I got pregnant. I knew getting an abortion was the only option for me; I didn’t have to think about it a lot.

I went to the Royal Infirmary in Glasgow for my second appointment by myself. I hadn’t told a single person in my life at the time.

There was a group of anti-choice protesters, just men over the age of 50, standing in a group, all sort of huddled together. I think they were across the road from the hospital, but the road isn’t big – they were as close as they could be,  standing with signs. They were positioned strategically and dressed for all weather, in anoraks, so they could be there for as long as possible.

I felt so targeted. I knew it was for me, because that’s what I was there to do. I’m never going to forget that, it became part of my abortion experience.

I went into survival mode – I definitely had tunnel vision because I didn’t want to think about the protesters. I think other people might not have coped; I don’t know how someone even younger than me would have been able to carry out the steps.

Having an abortion is an extremely personal medical decision which requires privacy. I felt conflicting emotions – you’re dealing with your own morals and principles, then you get full-grown men telling you your principles aren’t right.

Even though I knew it was the right choice for me, I felt fragile taking the steps to my appointment. I kept referring back to what the doctor told me – practical things like where I needed to go, what I needed to do. I wasn’t having a moral dilemma. But seeing the protesters, you’re made to feel that it’s no longer a medical decision. They’re infringing their views on your experience, which would never be allowed in any other medical appointment.

It was a massive stress I didn’t need to be put through. I was already thinking, I hope nobody sees me. It changed my frame of mind – I went into a state of frenzied anxiety, I couldn’t even think straight.

I’ll never know what it would have been like to have the abortion without them there. I’ll never be able to look back and think about it as a private medical procedure. It changed my experience of the decision, the procedure and my memory of it.

Every person is susceptible to stigma, and that’s what they’re standing out there creating.  I felt really alone. I didn’t tell my family – I think I probably would have massively benefited from sharing it with my mum. I’ll never know because I was made to feel I should question everything I was doing. I didn’t feel free from their opinions.

I was in the middle of university exams at the time, and I had a Scottish criminal law exam the following day. I broke down in the middle of it and didn’t finish it. One of the questions had spiked a thought about the protesters and how I myself was potentially doing something criminal. From that point, I didn’t finish the exam and ultimately failed it.

Seeing stuff about abortion in the news, like the fall of Roe v Wade in the US, brings it back. It makes me think of my friends who’ve been targeted by protesters and it makes me worry about young girls who are going through this. It makes me think the health board and government don’t care about their safety and mental health.

It’s not an issue of free speech. If you want to stand on Buchanan street with a sign about abortion, you can, on you go, that’s free speech. How we can’t recognise that standing near the door of a medical centre is different is worrying.

I’ve definitely seen them since. I wouldn’t trust myself to walk past Sandyford clinic and be calm. One in three women have had an abortion – it could be having this emotional impact on one in three when they’re walking past and seeing protesters. I don’t want to walk past them – if I do, my day is ruined. I turn into this wee girl, just emotionally retreating into myself, even though I’m a grown woman who knows what my rights are. It’s totally unique. It’s a level of targeting that makes you feel hated.

(As told to Clea Skopeliti)

Linkedin
RELATED ARTICLES
OTHER ARTICLES
Rhiannon Adam spent three months capturing an ageing society wracked by division, isolation, and the aftermath of scandal.
Financial turmoil is pushing people who work in the sex industry into more dangerous and desperate situations as a means of survival.
For over a decade, gamblers have won big by employing people to place live bets from the court. But does this dubious method still work?
A new project is documenting formerly incarcerated people as they transition back into civilian life.
With skyrocketing rents, packed out viewings, bidding wars and more, renting in London has never been harder.
A 37-year-old woman shares how her abortion led her to become a clinic worker, and the abuse she’s received in that role.